Read Hitching Rides with Buddha: A Journey Across Japan Online

Hitching Rides with Buddha: A Journey Across Japan 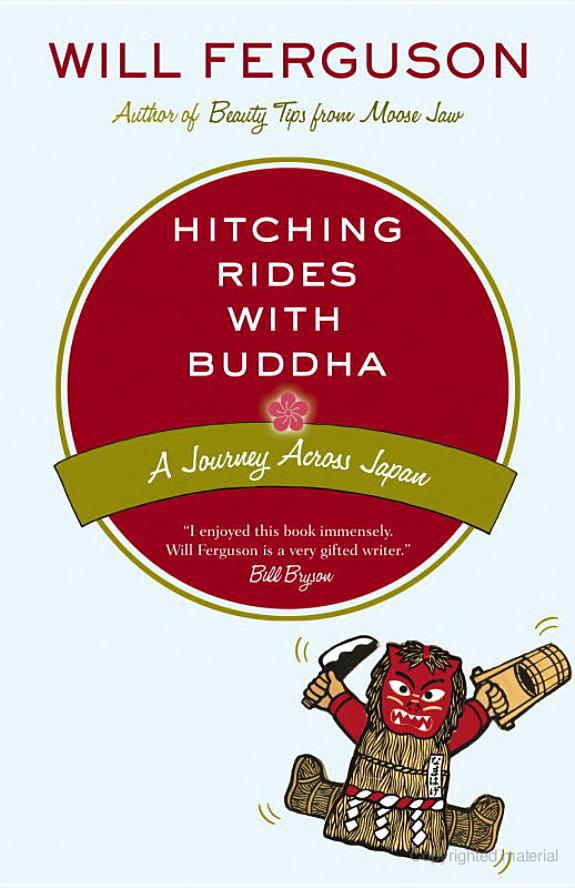 Praise for Will Ferguson and
Hitching Rides with Buddha

“With a facility in the Japanese language that seems capable of coping with, if not quite solving, all obstacles, our savvy young Canadian travel guide is ever ready to deflate conventional sentimentality … Quick to cavil, self-deprecating, Will Ferguson seems eminently trustworthy.”

—
The Globe and Mail

“Ferguson is certainly a sprightly writer, blessed with a sense of the absurd in everyday life but with an empathy for strange and exotic things.”

“[Ferguson’s encounters] are fleeting, yet vivid, like the blossoms he followed.”

“[Will Ferguson is] a wickedly witty travel guide, with a knack for dropping absurdist, out-of-left-field remarks that raise a smile or a belly laugh….
Hitching Rides with Buddha
brims with acerbic humour, informed observations, and lively stories. Ferguson is one fine Land of the Rising Sun tour guide.”

“A fantastically offbeat odyssey brimming with irony, poetry, and insight.”

“What a wonderful book. Like Bill Bryson, Ferguson is often at his best (and laugh-out-loud funniest) when most annoyed, but he is fundamentally sympathetic and his tale, at one point, may even move you to tears.”

“You trust both his humour and his insights…. An admirable pair of eyes through which to see contemporary Japan.”

“The road book of the year…. A warm-hearted account with a generous helping of satire.”

“[Ferguson] writes about the Japanese and their unfathomably wonderful country with depth, warmth, and affection.”

“Loaded with insights and highly original observations, this is overall an outstanding piece of travel writing. That so much of it is side-splittingly funny helps.”

“Beneath that thick skin lies a poetic soul: he may drink too much, and end up sweaty and alone in sad ‘Love Hotels,’ but he can write about Shintoism, history, nature, and architecture with real sensitivity.”

“What makes this book so appealing is Ferguson’s unpredictability. Stylistically, he never sits still… [H]e seems capable of writing in pretty much any mode that occurs to him, and has opinions on everything…. And though he’s frequently and savagely ironic, he is also not afraid to declare his feelings—which means you trust both his humour and his insights.”

“Ferguson masterfully presents many of the differences between Japan and the rest of the world, making for some excellent—and often hilarious—storytelling.”

“If Douglas Adams and P.J. O’Rourke ever had an extra-terrestrial Satanic love-child, it would probably write like Will Ferguson. That is, it would be observant, attitudinal, occasionally offensive, and funny.”

“Ferguson’s dry sense of humour portrays an insider’s view of Japan. For anyone thinking of going to Japan, this will be an invaluable read. If you’ve already been, you will find yourself laughing out loud in recognition.”

“Funny and revealing…. It is a relief to hop into a stranger’s car with Will Ferguson.”

“Sometimes touching, sometimes amusing, and always true … As a wordsmith and a traveller, Ferguson knows where he is going.”

ALSO BY WILL FERGUSON

Bastards and Boneheads: Canada’s Glorious Leaders
Past and Present

I was a Teenage Katima-victim! A Canadian Odyssey

The Hitchhiker’s Guide to Japan

Why I Hate Canadians

All things considered, there are only two kinds of men in the world—those who stay at home and those who do not. The second are the more interesting.

—RUDYARD KIPLING
,
as quoted in
The Honourable Visitors

Note on the Canadian Edition

5
I
NTO A
N
ORTHERN
S
EA:
Across Hokkaido

This book was published in the US and the UK under the title
Hokkaido Highway Blues
. An abridged British pocketbook version was also released. The full version has been restored for the Canadian edition, along with the title I always wanted:
Hitching Rides with Buddha
. (That title was nixed by the American publisher on the complaint that it sounded too religious. Sigh.)

The photograph on the front is of a wooden folk toy I brought back with me from northern Japan. It depicts one of the
namahage
, the red-faced, wild-tempered demons who terrorize children and are placated with saké. It is said that the legends of these namahage originate with shipwrecked Russian sailors who were washed ashore. I can think of no better emblem for long-term Western residents living in Japan.
Hitching Rides with Buddha
is the tale of one such namahage and his journey across a country that has held him captive for years. 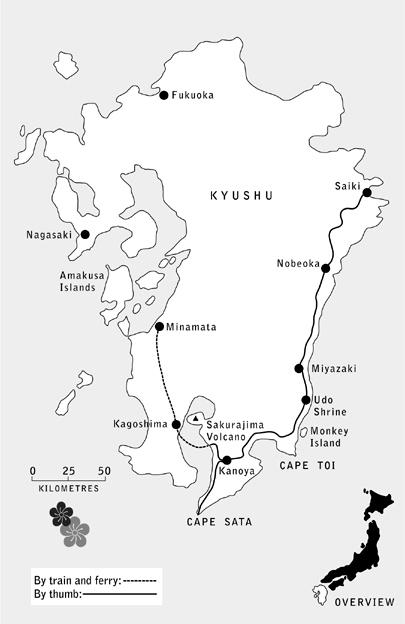