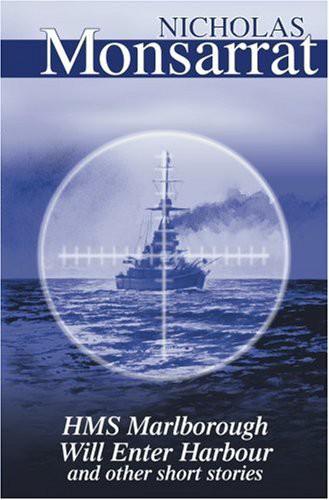 In H.M.S. Marlborough Will Enter Harbour, an old sloop, homeward bound, is torpedoed, leaving her guns out of action, more than three-quarters of her crew dead, and radio contact impossible. But her valiant captain steadfastly refuses to surrender his ship. In Leave Cancelled, an army officer and his young wife concentrate their passionate love into twenty-four hours, knowing that it might be their last chance. And in Heavy Rescue, an old soldier, having lived on the scrap heap for more than twenty years, finds that gallantry is once again in demand when he becomes leader of a Heavy Rescue Squad.

Nicholas Monsarrat was born in Liverpool and educated at Cambridge University, where he studied law. His career as a solicitor encountered a swift end when he decided to leave Liverpool for London, with a half-finished manuscript under his arm and only forty pounds in his pocket.His first book to attract attention was the largely autobiographical 'This is the Schoolroom', which was concerned with the turbulent thirties, and a student at Cambridge who goes off to fight against the fascists in Spain only to discover that life itself is the real schoolroom.During World War II he joined the Royal Navy and served in corvettes. His war experiences provided the framework for the novel 'HMS Marlborough will enter Harbour', which is one of his best known books, along with 'The Cruel Sea'. The latter was made into a classic film starring Jack Hawkins. Established as a top name writer, Monsarrat's career concluded with 'The Master Mariner', a historical novel of epic proportions the final part of which was both finished (using his notes) and published posthumously.Well known for his concise story telling and tense narrative on a wide range of subjects, although nonetheless famous for those connected with the sea and war, he became one of the most successful novelists of the twentieth century, whose rich and varied collection bears the hallmarks of a truly gifted writer.The Daily Telegraph summed him up thus: 'A professional who gives us our money's worth. The entertainment value is high'.

The right of Nicholas Monsarrat to be identified as the author of this work has been asserted.

This is a fictional work and all characters are drawn from the author's imagination.

Nicholas Monsarrat
was born in Liverpool, the son of a distinguished surgeon. He was educated at Winchester and then at Trinity College, Cambridge where he studied law. However, his subsequent career as a solicitor encountered a swift end when he decided to leave Liverpool for London, with a half-finished manuscript under his arm and £40 in his pocket.

The first of his books to attract attention was the largely autobiographical ‘This is the Schoolroom’. It is a largely autobiographical ‘coming of age’ novel dealing with the end of college life, the ‘Hungry Thirties’, and the Spanish Civil War. During World War Two he joined the Royal Navy and served in corvettes. His war experience provided the framework for the novel ‘HMS Marlborough will enter Harbour’, and one of his best known books. ‘The Cruel Sea’ was made into a classic film starring Jack Hawkins. After the war he became a director of the UK Information Service, first in Johannesburg, then in Ottawa.

Established as a sort after writer who was also highly regarded by critics, Monsarrat’s career eventually concluded with his epic ‘The Master Mariner’, a novel on seafaring life from Napoleonic times to the present.

Well known for his concise story telling and tense narrative, he became one of the most successful novelists of the twentieth century, whose rich and varied collection bears the hallmarks of a truly gifted master of his craft.

‘A professional who gives us our money’s worth. The entertainment value is high’- Daily Telegraph

These three short stories, dealing with differing aspects of love in wartime, were written at intervals during the past two years. It was my original intention to publish the second one,
Leave Cancelled
, as a separate volume, but my publishers disagreed for reasons concerned in varying degrees with production difficulties and professional caution. I dare say they were right. I must, however, remark that
Leave Cancelled
, published as a separate novel in America, dodged in and out of the best-sellers lists for more than six months, sold 60,000 copies, and earned, in a mid-Western journal, the singular heading ‘Briton Slave To Sex’. This proves something, though I am not sure what.

Book One: ‘HMS Marlborough Will Enter Harbour’
Chapter One

The sloop,
Marlborough
, 1,200 tons, complement 8 officers and 130 men, was torpedoed at dusk on the last day of 1942 while on independent passage from Iceland to the Clyde. She was on her way home for refit, and for the leave that went with it, after a fourteen-month stretch of North Atlantic convoy escort with no break, except for routine boiler-cleaning. Three weeks’ leave to each watch – that had been the buzz going round the ship’s company when they left Reykjavik after taking in the last convoy: but many of them never found out how much truth there was in that buzz, for the torpedo struck at the worst moment, with two-thirds of the ship’s company having tea below decks, and when it exploded under the forward mess-deck at least sixty of them were killed outright.

HMS
Marlborough
was an old ship, seventeen years old, and she took the outrage as an old lady of breeding should. At the noise and jar of the explosion a delicate shudder went all through her: then as her speed fell off there was stillness, while she seemed to be making an effort to ignore the whole thing: and then, brought face to face with the fury of this mortal attack, gradually and disdainfully she conceded the victory.

The deck plating of the fo’c’sle buckled and sagged, pulled downwards by the weight of the anchors and cables: all this deck, indeed, crumpled as far as the four-inch gunmounting, which toppled forwards until the gun muzzles were pointing foolishly to the sea; a big lurch tore loose many of the ammunition lockers and sent them cascading over the side. Until the way of her sixteen knots fell off, there were crunching noises as successive bulkheads took the weight of water, butted at it for a moment, and then gave in: and thus, after a space, she lay – motionless, cruelly hit, two hundred miles from home.

So far it had been an affair of metal: now swiftly it became an affair of men. From forward came muffled shouting – screaming, some of it – borne on the wind down the whole length of the ship, to advertise the shambles buried below. The dazed gun’s crew from ‘A’ gun, which had been directly over the explosion, climbed down from their sagging platform and drew off aft. There was a noise of trampling running feet from all over the ship: along alleyways, up ladders leading from the untouched spaces aft: confused voices, tossed to and fro by the wind, called as men tried to find out how bad the damage was, what the orders were, whether their friends had been caught or not.

On the upper deck, near the boats and at the foot of the bridge ladders, the clatter and slur of feet and voices reached its climax. In the few moments before a firm hand was taken, with every light in the ship out and only the shock of the explosion as a guide to what had happened, there was confusion, noisy and urgent: the paramount need to move quickly clashed with indecision and doubt as to where that move could best be made. The dusk, the rising sea, the bitterly cold wind, which carried an acrid smell in sharp eddying puffs, were all part of this discordant aftermath: the iron trampling of those racing feet all over the ship bound it together, coordinating fear into a vast uneasy whole, a spur for panic if panic ever showed itself.

It never did show itself. The first disciplined reaction, one of many such small reassurances, to reach the bridge was the quartermaster’s voice, admirably matter-of-fact, coming up the wheelhouse voice-pipe: ‘Gyro compass gone dead, sir!’ The midshipman, who shared the watch with the First Lieutenant and was at that moment licking a lip split open on the edge of the glass dodger, looked round uncertainly, found he was the only officer on the bridge, and answered: ‘Very good. Steer by magnetic,’ before he realized the futility of this automatic order. Then he jerked his head sideways, level with another voice-pipe, the one leading to the Captain’s cabin, and called: ‘Captain, sir!’

Take Me: The Complete Series (Power Play #1-4) by Kelly Harper
Blood on the Sand by Michael Jecks
Kidnapping in Kendall County by Delores Fossen
The big gundown by J.A. Johnstone
Stitched Up Heart (Combat Hearts Book 1) by Tarina Deaton
The Masque of Africa by V.S. Naipaul
What I Loved by Siri Hustvedt
Solomon Gursky Was Here by Mordecai Richler
Chaste Kiss by Jo Barrett
Tales of Arilland by Alethea Kontis
Our partner