Read Holding Out for a Fairy Tale Online

Holding Out for a Fairy Tale 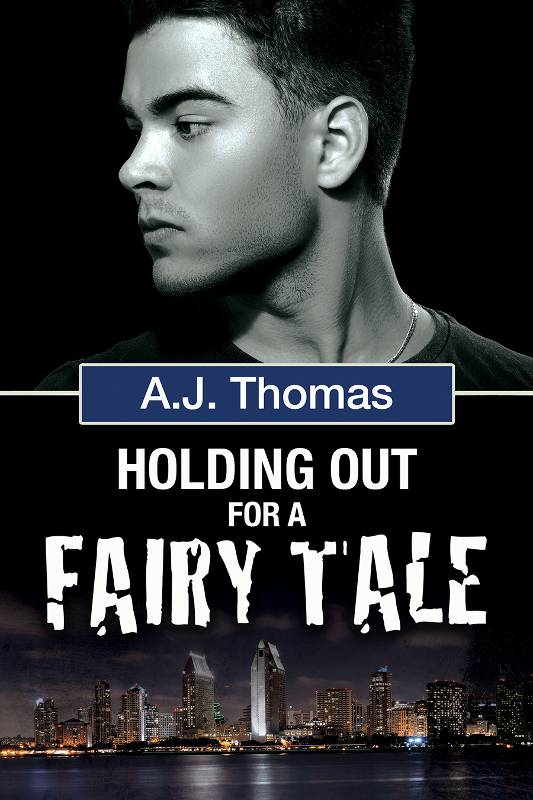 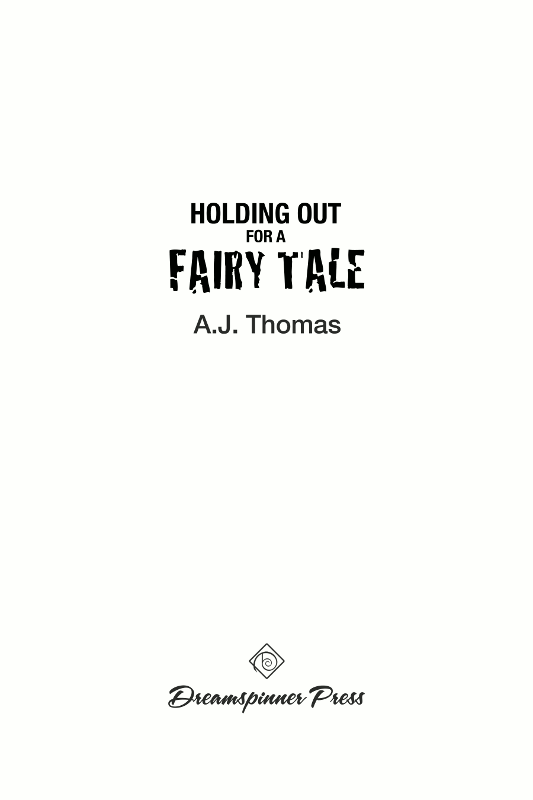 Holding Out for a Fairy Tale

and any person depicted on the cover is a model.

R
AY
SMILED
against the other man’s lips, laughing as they crashed through his bedroom door and tumbled onto the bed in a tangle of limbs. He pulled the man on top of him, so he was wedged between the man’s legs, then ran his hands up thighs and over denim. He bucked his hips up, enjoying the friction of the other man’s ass against him. He was about to pull his date down for another kiss when he saw the uneven shades of gray silhouetted against the door. He rolled for his gun.

He didn’t spare a moment. The only person who had a key to his apartment was over a thousand miles away, and he had never come into Ray’s bedroom, even when Ray had wanted him to. Ray grabbed the loaded Glock he kept under his pillow and rolled off the bed, firing into the dark doorway. Knowing he only had seconds, he rolled into a low crouch against his closet door and lined up for a second shot. The gray outline of the intruder had moved.

Ray was vaguely aware of his date screaming, but he could block out the noise. He focused on the moving shadow. Whoever it was, they were fast, evading the first shot by lunging to the side, putting Ray’s date between them.

“Stop shooting or she dies,” a callous voice shouted in the darkness.

Ray’s date started screaming again, and in the darkness, Ray could see him kneeling on the bed, right where he had been before, with his head jerked back painfully. “Okay, then. Stop shooting or
he
dies. And really, Raymond, if I wanted you dead, I’d have killed you years ago.”

He knew that voice. From childhood memories of sun-drenched basketball courts and a hundred lazy afternoons at their grandmother’s house, Ray would always know his cousin’s voice. Unfortunately, he knew Alejandro Munoz well enough to have no delusions about the man. Alejandro would have no qualms about saying he was there to talk and then shooting him in the head the moment he let his guard down. Of course, he also wouldn’t hesitate to shoot through the man he was using as a human shield either.

He pulled the slide on his pistol back to shift another round into the chamber. Keeping the pistol trained on the bulky outline crouched behind his terrified date, Ray sidestepped toward the door, hoping to get a clear shot. Alejandro turned Ray’s date to stay behind him.

“I won’t help you.” Ray spat the words he felt as if he’d been repeating for a lifetime. “Get the fuck out!”

“It’s not about me.” Alejandro’s growl made the man frozen between them yelp, his head jerked backward even farther as Alejandro’s fingers tugged at his hair. “You know everything is blowing up? That those Garcia fuckers are trying to push me out?”

Ray knew all too well that the Tijuana drug cartel had descended into chaos. The DEA had arrested the last of Ray’s great uncles, who had shared leadership of the most powerful drug cartel in Tijuana, just a few years ago. Now the leadership of the cartel was up for grabs, and all the different families who could claim kinship with the cartel leaders were grappling for power, including Ray and Alejandro’s family, and enemy cartels from other parts of Mexico. The prize was control over the flow of virtually all narcotics pouring into California.

“I don’t give a fuck. Whoever tries to move in, I’ll arrest them too.”

“You think you’re safe? You think any of us is?” Alejandro laughed. “They’ve taken Sophia. She vanished on her way to class two weeks ago. Do you want Carmen and her kids to be next?”

Ray kept his gun steady even though his vision was beginning to narrow as tunnel vision set in. He forced himself to take several long, slow breaths. Sophie Munoz, the youngest of Alejandro’s siblings, was one of his many cousins. Like every teenager, she’d had trouble getting along with her parents and her brothers, and so she’d been shuffled among extended family until she finally settled in and found a place with Ray’s sister Carmen. Sophie had spent most of high school living with Ray’s little sister, helping Carmen with her kids and watching old science fiction flicks with Ray. The extra help had made it possible for Carmen to finish her nursing degree, and in return, Carmen had been helping Sophie through school. Even though Sophie was fifteen years younger than him, Ray and Sophie had always been friends. At twelve, he’d kept her entertained by writing little video games that ran on her graphing calculator. At thirteen, she’d learned enough about Java programming to put those games on her new cell phone, complete with full-color graphic interfaces and expanded levels. She was nothing short of a genius, and since she was the only other member of his family who had resolved never to have anything to do with the Tijuana criminal organization their great uncles had once controlled, Ray had more in common with her than anyone else in his family.

“Do not threaten Carmen, Alejandro. If anything happened to Sophie, I’d have heard about it. I’m more of a brother to her than you ever were.”

“You think I don’t know that? I just heard about it,” Alejandro continued. “One of her professors reported her disappearance to the police, and because she’s my sister they handed the case over to the FBI. They’re not even looking for her, just watching me.”

“Did they watch you break in here? Because if those fuckers are out there laughing, I’m going to shoot them in the head.”

“Why are you telling me this?”

“I told you, Esteban Garcia’s trying to push me out. I can’t tell you the details, but he set me up to look like a traitor just so he can take over my fucking territory once and for all. I can’t look for her without handing myself over to the feds because they’re hovering around her dorm.”

“Why would they go after her? She’s got nothing to do with you.”

Ray shifted to a two-handed grip as his right arm began to shake under the weight of the gun. He sidestepped again, hoping Alejandro wouldn’t notice. His cousin moved his human shield to match him. The man he’d brought home tonight was trembling, probably hyperventilating, and blubbering all over his bed. Ray sighed. He knew he’d have to change his sheets anyway, but he was kind of hoping he’d get laid first.

“No,” said Ray. “I’m calling bullshit. Sophie’s missing, and you just happen to hear about it before me or Carmen? And you come up with all this crap about Esteban Garcia targeting you? You’re trying to start a fight. Is she actually missing, or did you arrange it?”

“You insult me, Raymond. You think I would exploit my own sister’s kidnapping just to have an excuse to pick a fight?”

“No.” Ray shook his head. “That’s not your style. I think you would
orchestrate
your own sister’s kidnapping for an excuse to pick a fight. Especially if it meant going back to the way things used to be.” Back to the ever-escalating violence that shocked every other Mexican drug cartel into leaving Tijuana and San Diego alone. Alejandro had been in his element during those years, indulging every perverse and disgusting creative impulse that arose in his mind. With all of the old leadership in jail, a tense peace had been established, even though the Tijuana drug cartel had become little more than a puppet empire ruled over by their former rival, a massive central Mexican cartel controlled by a drug lord named Esteban Garcia.

Over the last month, Ray had been hearing rumors that Alejandro’s dealers were trying to track down someone who’d siphoned millions of dollars from dummy accounts they used to launder money before sending a sizeable chunk of the money off to Garcia. Since only Alejandro’s own enforcers had access to the accounts, his own men were all on edge, wondering which of them was guilty and which he would kill just on the chance that they were guilty. Ray knew the smart ones were hedging their bets, making side deals with Esteban Garcia’s enforcers, in hopes of surviving no matter which man came out on top in what was shaping up to be an all-out war.

In the darkness, Alejandro’s chuckle grew into a full-blown laugh. “I think I should be grateful that you broke with us when you did, Raymond. If you hadn’t betrayed us, poor old Garcia and I would be doomed to be your lackeys. If I thought the way you do, I wouldn’t have to pick a fight to accomplish anything.”

“Are you really trying to suggest that you’re the victim here?”

“Raymond, you might not believe this, but I prefer things as they are now. Peace has its advantages. But not everyone likes it. Do you think Garcia is happy taking a cut of everything that moves through San Diego when he can reach out and take it all?”

Ray narrowed his eyes. “If Sophie gets hurt because of you—”

“I want to get her home alive and in once piece. Find her. Or at least find out what the FBI knows?”

“Let him go and get out of my place.” Ray nodded toward the door.

“When there’s a wall between us.” Alejandro dragged Ray’s date off the bed by his hair. “Hey, when did you start doing men? Did you piss off every woman in San Diego?”

“What fucking business is that of yours?” Ray followed Alejandro’s movements with the barrel of his gun.

Alejandro chuckled. “None. I tried a guy once. I didn’t see the appeal. It’s not what I’d expect from you, that’s all.”