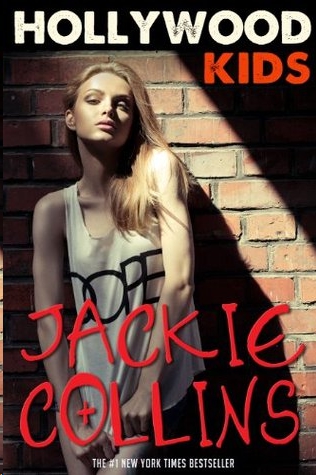 They're surrounded by everything money can buy. They've grown up with the heady scent of fame and success all around them. They're the Hollywood Kids, the adult children of Hollywood royalty, who always get what they want - until a serial killer walks among them and starts hunting them down...

Jordanna Levitt, the twenty-four-year-old uninhibited daughter of a breathtaking movie star mother and a world-renowned, hard-living producer. Jordanna lives her life on the wild side - unsettled, edgy, always searching for the love and approval her father is incapable of giving her.

Cheryl Landers, one of Jordanna's closest friends and the daughter of studio owner Ethan Landers, is determined to make it on her own, so she takes over the Little Black Book of a friend and, at twenty-four, becomes the Hollywood Madam...

Grant Lennon, Jr, only son of a male superstar, struggling to prove himself as an agent while falling prey to the sordid, dark pleasures of the Hollywood rich kids underground.

Together with their friends they live the Hollywood Dream - too much, too soon - unaware of the threat hanging over them.

And into their lives comes Kennedy Chase, a beautiful, savvy journalist who's on assignment to write the real truth about Hollywood. Kennedy doesn't like what she discovers, but she writes about it anyway...

And Michael Scorsini, a tough, street-smart NYPD detective, visiting LA in pursuit of his shattered family and to escape his own demons.

When opposites collide it's a roller-coaster of excitement and danger.

Hollywood
Kids
is
about people who will do
anything
for kicks, and the price they have to pay.

The Man emerged from prison on Tuesday morning filled with a pent-up rage he'd been keeping in check for seven years.

He was thirty-six years old and looked it. Pale, with a thin face, narrow slate-grey eyes and a prominent scar slashed across his right cheek - a souvenir of his incarceration. He was five feet eight inches tall and although once slight, in jail he'd had time to work on his body, and now he had muscles of steel and remarkable upper body strength.

In prison The Man had learned many things - the first being that defence was everything. If you couldn't defend yourself who would do it for you?

Seven years was a long time to be caged away from the real world.

Unless, of course, you were crazy to begin with. And you never let on because the motherfuckers did not deserve to know the truth.

The truth was his business. Only his. And woe betide anyone who tried to get it from him.

Freedom was the unknown. It beckoned, tempting him to do things he'd only dreamed about during his years behind bars.

First came the women. Faceless whores put on this earth to do his bidding.

The Man used them mercilessly, paying them more money than they deserved to do the things they couldn't get enough of, because whether you paid them or not all women were whores
-
his father had taught him that
.

When his appetite was sated he took out his list and studied it intently.

The Man's list, written neatly on a single-lined piece of paper, was the only positive thing in his life. Without the list he couldn't have gone on. He would have given up and hung himself like his first cell mate.

His list had kept him strong. Given him a real purpose.

If those motherfuckers in Hollywood thought they'd seen the last of him they were wrong.

'Jordan, my pal, you've got another smash.'

The praise came fast and furious. Jordan Levitt and his wife of six months, Kim, revelled in it as they stood at the massive front door of their Bel Air estate saying goodbye to their guests.

Dinner and a private screening at the Levitts' was a weekly event. Only tonight was more of an event than usual because Jordan, a veteran producer, had just screened his latest production.

Kim squeezed her husband's arm and gazed up at him adoringly. She was softly pretty with flowing light brown hair and winsome features. At twenty-two she was younger than his only daughter. 'They loved it,' she whispered excitedly. 'And so did I. Oh, Jordan, you're so clever.'

Jordan smiled down at his new bride. He was a powerful looking man, over six feet tall with a shock of unruly grey hair, scraggy features and a deeply lined tanned face. Soon he would be sixty-two - like Clint Eastwood, age suited him. 'You never now,' he said modestly.

He put his arm around Kim, walking her back into the house.

'It doesn't matter what this group thinks,' he said. The public makes their own decisions.'

'Not only clever, but oh
sooo
wise,' Kim murmured, tilting her head to gaze up at him.' I wish I had time to write down everything you said, you always make such perfect sense.'

Jordan kept smiling. With a woman like Kim to feed his ego, he never stopped.

'Jordan's really lost it on this one.'

So went the conversation as the guests got into their respective cars parked in the Levitts' driveway.

Sharleen Wynn Brooks was particularly vocal. A voluptuous redheaded movie star of thirty-five, she seemed to take great pleasure in pulling her ex-lover Jordan's movie to shreds frame by frame.

Her Oscar-winning director husband, Mac Brooks, laughed as he got behind the wheel of their yellow Rolls Corniche. At forty-three Mac was handsome in a rumpled been-around-the-block way. He had curly brown hair and a once broken nose that told tales of his past - way back when he was an amateur boxer in, Brooklyn. 'Come on, baby, tell me what you
really
think,' he urged, patting her knee affectionately. 'Don't hold back.'

'Not me,' Mac replied. 'Jordan's a control freak, everything has to be his way or no way at all. After making
The Contract
with him I decided never again.'

'You won an Oscar for
The Contract,'
Sharleen pointed out. 'And met me for the first time.'

She giggled again. 'You're so
rude
.'

'If I recall, you didn't give me a second glance, you were too busy with that muscle-bound jerk who trailed you to the set every day.'

'My trainer,' she said demurely.

'And three years later we worked together again and fell in love.' She sighed happily. 'Isn't it romantic?'

As their car left the Levitts' driveway she snuggled closer to her husband, taking his hand and moving it under her expensive Valentino skirt.

Going down the winding driveway the Rolls nearly collided with a speeding white Porsche coming in the opposite direction driven by Jordanna - Jordan Levitt's twenty-four-year-old daughter.

Jordanna honked her horn as she screeched her car to a halt alongside the Rolls. Lowering her window she leaned out. 'Did I miss the movie?' she asked, tossing back her long dark hair.

What do
you
think?' Mac responded, surreptitiously removing his hand from under his wife's skirt.

Jordanna pulled a face. 'Is my old man pissed?'

Jordanna grinned at Mac. He'd been her lover when she was a teenager and he was thirty-six, now they were nothing more than good friends. 'Glad to hear it,' she said, adding a low-voiced, 'Or maybe not.'

Sharleen waved, she wasn't fond of Jordanna and it showed. 'Hello, dear,' she said frostily.

The feeling was mutual. 'Hiya, Shar,' Jordanna responded, wondering what a cool guy like Mac saw in the over-stuffed movie queen.

'Your father's really mad at you.'

Sharleen peered into the Porsche. Who's your friend, dear?'

Trust Sharleen to notice the stud sitting beside her in the passenger seat. Jordanna had no idea what his name was, and quite frankly she didn't care. They were all the same in the dark. Midnight Cowboys. Her life.

'See ya!' she said, gunning the Porsche into action and disappearing up the driveway.

That girl's trouble,' Sharleen said, pursing newly plumped lips. 'Jordan should do himself a favour and throw her out.'

'She's twenty-four, for God's sake. I had my own child when I was her age,' Sharleen said, moving closer and running her fingers lightly up his thigh.

Mac prepared himself, he knew what was coming and it was the high point of his evening. Sharleen was into car sex and who was he to argue? It kept the heat in a four-year-old marriage.

As soon as she touched him he was hard. Oh yeah, Sharleen did it for him every time, she was one talented female, and he didn't mean her acting.

He'd met her on the job so to speak. Directing Sharleen had been an experience. Sleeping with her had soon led to marriage.

Monogamy was something new for Mac Brooks. Before Sharleen he'd bedded all his leading ladies, now his extremely sexy wife kept him too busy for affairs.

This was Mac's favourite part. Driving down the dark narrow hills with a mammoth hard-on. Trying to concentrate. Hoping they didn't get stopped by the cops - or even worse, a couple of would-be car-jackers in ski masks. It all added to the excitement.

Sharleen bent her head, tantalizingly licking the tip of his penis, her lightning-fork tongue flicking this way and that. After he was suitably turned on, she sat back and began unbuttoning her silk shirt, revealing a lacy black bra.

One eye on the road. One eye on her.' Take it off, baby,' he muttered, hard as the proverbial rock.

'Do it,' he said tensely, the pressure building.

She slipped off her silk shirt and undipped her lacy bra. Sharleen had the best breasts in Hollywood - untouched by plastic surgeon they were full and firm, topped with juicy hard nipples.

'Oh, Jesus!' Mac groaned, swerving the car to the side of the road.

Sharleen enjoyed enslaving him. 'Jesus has nothing to do with it,' she murmured sweetly.

Wasn't that Sharleen Wynn?' the stud asked, barely able to keep the awe out of his voice.

'Huh?' Jordanna said vaguely, screeching to an abrupt stop at the top of the driveway.

'Sharleen Wynn,' he repeated, looking like a reject drummer from a grungy rock band with his long greasy hair, scruffy clothes and dime-store shades.

'I'm surprised you know who Sharleen Wynn is,' Jordanna remarked, getting out of the car.

'Sure I know who she is,' the stud said somewhat indignantly. 'My dad had a copy
of Playboy
with her on the cover. Kept it by his bed for months.'

'Never mind about hers, how about mine?' Jordanna said boldly, pressing up against him.

He took the hint and started to kiss her. Long hard kisses with plenty of tongue action.

She decided this one had possibilities. 'Come along,' she said, pulling him on to the path leading to the guest house.

'Aren't we goin' inside?' he asked, sounding disappointed.

'My apartment's in back.' She laughed, a brittle laugh. 'It's more fun back there. Trust me.'

'Then be a good little boy and follow me all the way to an incredible time.'

I bet you are
, she thought.
Pretty girl. Great wheels. Magnificent mansion. What's to lose
?

She'd picked him up at a music industry party, attracted by his black jeans. There was something about skinny guys in tight jeans that really got her attention, it reminded her of visiting one of her father's sets when she was ten, and meeting Teddy Costa - a hot young actor with the best butt in the business. The very thought of Teddy had taken her through puberty, until at the age of fifteen she'd casually dropped by his trailer during the making of another of Jordan's films and seduced him.