Read Home for a Soldier Online

Home for a Soldier 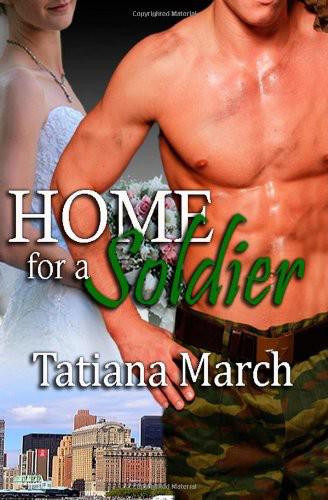 Grace Clements is unemployed, lonely and broke. When she agrees to marry Rory Sullivan before he ships out to Iraq, she expects nothing but a Las Vegas wedding, a key to his New York apartment, and a divorce two years later. Instead, she gets a three-day honeymoon and a heart full of dreams of what could be... if he loved her. Ten years ago, Rory Sullivan lost someone he loved. He gave up a life of wealth and privilege and joined the army. Hiding behind a wall of isolation, he avoids all emotional ties - until injury sends him home to recuperate. Home to Grace, whose quiet dignity and gentle concern break through his defenses. As Rory fights his feelings, his gruff resistance drives Grace away. But even when he believes she has betrayed him, he can no longer forget her. Can he make peace with his past in order to win back his wife?

Home For A Soldier

Warning: All rights reserved. The unauthorized reproduction or distribution of
this copyrighted work is illegal. Criminal copyright infringement, including
infringement without monetary gain, is investigated by the FBI and is punishable
by up to 5 years in federal prison and a fine of $250,000.

This is a work of fiction. Names, characters, places and occurrences are a
product of the author’s imagination. Any resemblance to actual persons, living
or dead, places or occurrences, is purely coincidental.

“I’m getting married,” Debbie gushed.
“
Married.
” She lingered over the word, as if sharing a miracle.

“Of course you’re getting married.”
Grace grabbed the sleeve of Debbie’s parka and yanked her sister across the
threshold before slamming the door on the howling January wind that heralded
another New Jersey snowstorm. “You told me all about it at Christmas, remember?
I tried to persuade you not to go ahead with it, but as usual, you ignored me.”

“
No, no.
You don’t
understand.” Debbie shook her head so hard the jaunty wool cap perched atop her
dark curls tumbled off. “I’m getting married to Doug. He proposed on New Year’s
Eve.”

Grace crouched to retrieve Debbie’s
hat. “What about this other guy?” she asked as she slowly straightened. Her
fingers curled tight around the damp wool. She already knew what would come
next, and her heart beat in heavy thuds that reverberated all the way down to
her stomach.

“Well, I was hoping that you…”
Debbie’s words trailed off. Her mouth pulled into a pout that hovered between
speculation and embarrassment.

Grace sighed. It was always the same.
Debbie got herself into trouble, and good old big sister would have to rescue
her. “No,” she said with emphasis. “Count me out.”

“But,
Gracie
.” Debbie’s voice
rose with the enthusiasm of a spoiled child who’d grown into a beautiful woman
and always got her way. “Who else am I going to find at such short notice? The
wedding’s supposed to be on Saturday.”

“I’m not marrying a stranger. Find
somebody else.”

“Grace,
think
. All he wants is
a wife, so that when he’s sent to Iraq for two years, he can keep his
rent-controlled apartment. He pays less than a quarter of market rent, but he
can’t sublet or leave the place empty. The only way he gets to hold on to the
apartment is by marrying and letting his wife live there until he gets back.”

Grace drew a deep breath. Stale
cooking odors wafted out from the kitchen and filled her nostrils. She glanced
around the hallway. Two mountain bikes had streaked the narrow passage with mud,
and a jumble of shoes and sneakers littered the floor. Out of the six people
sharing the ramshackle house in
Jersey City
,
five showed no respect for order or cleanliness.

“Just think,” Debbie carried on,
attacking Grace’s hesitation. “You could live in a nice apartment, rent-free for
two years. You could start saving for another deposit to buy your own place.”

“Rent-free?” Grace asked, and
mentally shoved aside the legal, practical and moral problems the arrangement
would create. She had no boyfriend, no job. She needed something to cling to, a
hope for a brighter future. The dream of buying her own home sprang to life
underneath the ashes of failure where she’d buried it six months ago.

“Yes,” Debbie said. “If he marries
before he takes up the post, he’s entitled to a family allowance on top of his
overseas pay. He’s agreed to pay the rent.”

“Which is more, the rent or the
family allowance?” Grace asked.

Debbie fidgeted with the edge of her
sleeve. “The allowance is much more. I tried to get him to share, but he’ll only
go as far as paying the rent.”

“Here’s the score.” Grace jutted out
her chin in a stubborn gesture that everyone in the family knew marked her last
word on a subject. “Tell this guy I’ll step in and marry him, but he needs to
improve the terms. I’m not going to get involved in a fake marriage and end up a
divorcee without proper compensation. I want the family allowance.”

She paused for effect. “After all,
that’s what the allowance is for. To support his wife while he is away.”

Grace shrugged. “He’s welcome to pick
someone else. I wish him good luck in finding a woman he can trust. Someone who
won’t double-cross him by claiming alimony when he gets back from Iraq and it’s
time to file for a divorce.”

“I’ll tell him.” Debbie shifted
uncertainly on her feet. “If he says yes, do you promise to fly out to Vegas on
Friday and marry him on Saturday?”

Grace huffed. “I just said I would.
When I have ever broken my word?”

Grace noticed Debbie’s discomfort and
hardened her heart. Her little sister was flighty and unreliable, and it
shouldn’t be wrong to occasionally remind her of the fact, even though Grace
always ended up feeling guilty over her harsh words.

“What’s this guy’s name anyway?” she
asked on a resigned sigh.

Grace nodded. Rory Sullivan. She
tasted the name on her tongue, her gaze drifting over her sister’s pretty
features. It might be a marriage in name only, but apprehension filled her as
she wondered what Rory Sullivan would think when instead of Debbie with her
feminine curves and airhead ways, he encountered a woman who at five foot eleven
towered over many men. A woman who would never fill the bodice of a dress, who
cut her own hair, and who remained clueless about make-up. Who until six months
ago had earned her living as a statistician for an insurance company, and who
regarded solving simultaneous equations as a form of entertainment.

Grace shoved her hands through her
bluntly chopped tresses. Why worry she might not be Rory Sullivan’s dream woman?
Their interaction would be limited to a wedding and a divorce, and twenty-four
monthly payments in between.

“Are you sure this guy can be
trusted?” She frowned at Debbie. “He won’t land me with a stack of unpaid bills,
or expect me to look after his colony of pet hamsters, or turn up on the
doorstep demanding his conjugal rights?”

Debbie smiled and nodded as she drew
her gloves back on, getting ready to leave. “Don’t worry, Gracie. Doug’s known
him for years. He swears Rory Sullivan is a fine, upstanding citizen.”

“All right.” Grace shifted her
shoulders in an uneasy shrug. “If he meets my terms, you can give him my name
and email address. He needs to pay for the plane ticket. I’m broke.”

“I already gave him your details.”
Debbie pretended to be struggling with her gloves, but at least she had the
decency to blush. “He has loads of frequent flyer miles. He’ll book you an
e-ticket and email it to you.”

When the door slammed shut after
Debbie, Grace stood still. How had it happened? Despite her determination not to
get involved, once again she’d been landed with Debbie’s mess.

The crowd at McCarran Airport jostled
toward Baggage Claim. Businessmen with briefcases cut through the throng of
holidaymakers. Bachelor parties, dressed in matching T-shirts with rude slogans
printed on the front made their way forward in rowdy groups.

Grace slipped the printout from the
pocket of her baggy jeans and struggled to unfold it with one hand, while
lugging her overnight case with the other. She slowed her pace, dragging her
sneakers against the floor as she fumbled for her glasses in another pocket and
perched them on her nose. She’d removed her contacts on the plane because the
dry air bothered her eyes.

Re: Wedding on Saturday. Little White
Wedding Chapel booked for 7 p.m. Tickets to follow. American Airlines out of
Newark.  I’ll meet you in the arrivals area on Friday afternoon. Rory Sullivan.

Her jaw clenched. What was she doing,
marrying a stranger? A man so unfamiliar to her that he had signed their only
communication with his full name? She had no idea of how to even identify him,
since she hadn’t had the foresight to ask for a photograph.

Past security, a commotion on the
left drew her attention. A group of ruffians milled at the back of the waiting
crowd, yelling and whistling. She veered to the right to avoid the trouble, but
the stream of people pushed her toward the exit, past the idiots making the
racket.

Her feet froze to the floor and her
stomach turned to ice.

Surrounded by a bunch of jerks
wearing jeans and shorts and T-shirts in various colors, but in a universal
state of disrepair, a big man swayed on his feet, so drunk that two of his
buddies had to prop him up. An unbuttoned white cotton shirt spilled out of his
jeans, the tails flapping wide. Over his broad chest, a cardboard sign hung
suspended on a string.

Decorated with two red hearts, it
spelled out

Grace squeezed her eyes shut. Before
she recovered enough to sneak past the idiots and catch the next flight back to
Newark, her stunned expression must have given her away, because like a swarm of
locusts, the ragtag army descended on her. One grabbed the overnight case from
her hand. Another yanked the tote bag from her shoulder. A third shoved her at
the hoodlum towering in the center, who effortlessly scooped her into his arms.