Home Is Where Hank Is (Cowboys To The Rescue 1) 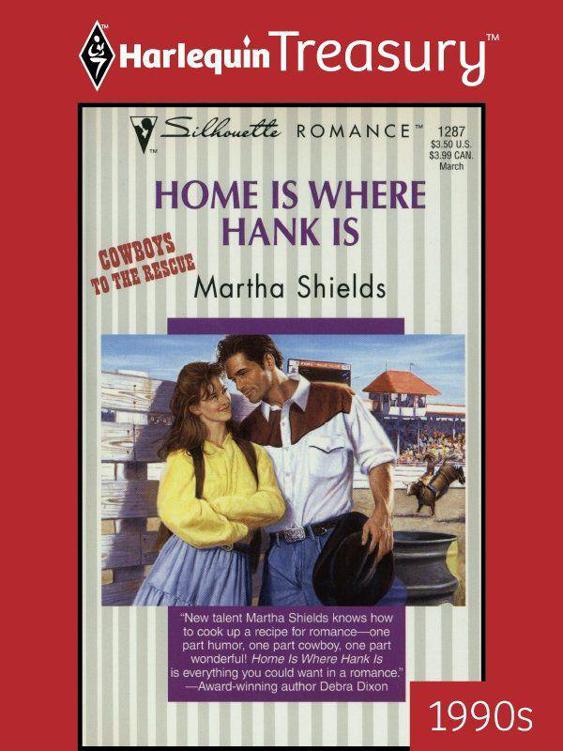 “I saved this for you,”
Letter to Reader
Title Page
Dedication
Acknowledgments
About the Author
Chapter One
Chapter
Two
Chapter Three
Chapter Four
Chapter Five
Chapter Six
Chapter Seven
Chapter Eight
Chapter Nine
Chapter Ten
Chapter Eleven
Copyright
“I saved this for you,”
Alex told Hank.
Every muscle in his body grew hard as he stared down at the extralarge piece of chocolate pie. Every time he thought he’d gotten past this stupid attraction that neither of them wanted, she went and did something like this.
It wasn’t much, just a piece of pie. But it meant she thought about him, just like he thought about her. If only she knew what drove him downstairs in the middle of the night....
It was hunger, all right, but not the kind she meant, though he ended up trying to appease it with mere food. Knowing she’d heard him, that she’d lain. awake while he stared at her closed door, sent heat shattering through him.
Dear Reader,
This month, Silhouette Romance unveils our newest promotion, VIRGIN BRIDES. This series, which celebrates first love, will feature original titles by some of Romance’s best-loved stars, starting with perennial favorite Diana Palmer. In
The Princess Bride
, a feisty debutante sets her marriage sights on a hard-bitten, cynical cowboy. At first King Marshall resists, but when he realizes he may lose this innocent beauty—forever—he finds himself doing the unthinkable: proposing.
Stranded together in a secluded cabin, single mom and marked woman Madison Delaney finds comfort—and love—in
In Care of the Sheriff
, this month’s FABULOUS FATHERS title, as well as the first book of Susan Meier’s new miniseries, TEXAS FAMILY TIES. Donna Clayton’s miniseries MOTHER & CHILD also debuts with
The Stand-by Significant Other
. A workaholic businesswoman accepts her teenage daughter’s challenge to “get a life,” but she quickly discovers that safe—but irresistibly sexy—suitor Ryan Shane is playing havoc with her heart.
In Laura Anthony’s compelling new title,
Bride of a Texas Trueblood
, Deannie Hollis would do
anything
to win back her family homestead—even marry the son of her enemy. In Elizabeth Harbison’s sassy story,
Two Brothers and a Bride
, diner waitress Joleen Wheeler finds herself falling for the black-sheep brother of her soon-to-be fiancé.... Finally, Martha Shields tells a heartwarming tale about a woman’s quest for a haven and the strong, silent rancher who shows her that
Home is Where Hank is.
In April and May, look for VIRGIN BRIDES titles by Elizabeth August and Annette Broadrick. And enjoy each and every emotional, heartwarming story to be found in a Silhouette Romance.
Regards,

Dedicated to my parents, Lu and J. C. Townsend, who always believed in me and my stories.
Acknowledgments
I’d like to thank the chamber of commerce in Dubois, Wyoming, for all the information they sent about the area, and Sylvia Crouter of the Box Hanging Three Ranch for patiently answering all my questions about ranch life in the Wind River Valley.
MARTHA SHIELDS
grew up telling stories to her sister to pass the time on the long drives to their grandparents’ house. Since she’s never been able to stop dreaming up characters, she’s happy to be able to share her stories with a wider audience. Martha lives in Memphis, Tennessee, with her husband, teenage daughter and a cairn “terror” who keeps trying to live up to his Toto ancestry. Martha has a master’s degree in journalism and works at a local university.

The Best of Michael Swanwick by Swanwick, Michael
Creative People Must Be Stopped by David A Owens
Werewolf Suspense (Book 3): Outage 3 (Vengeance) by Piperbrook, T.W.
Clay by Ana Leigh
The Nightingale by Hannah, Kristin
Serpentine Love by Sabine A.Reed
Alcatraz versus the Knights of Crystallia by Brandon Sanderson
Damned Good Show by Derek Robinson
Breaking Lorca by Giles Blunt
The Labyrinth of the Dead by Sara M. Harvey
Our partner