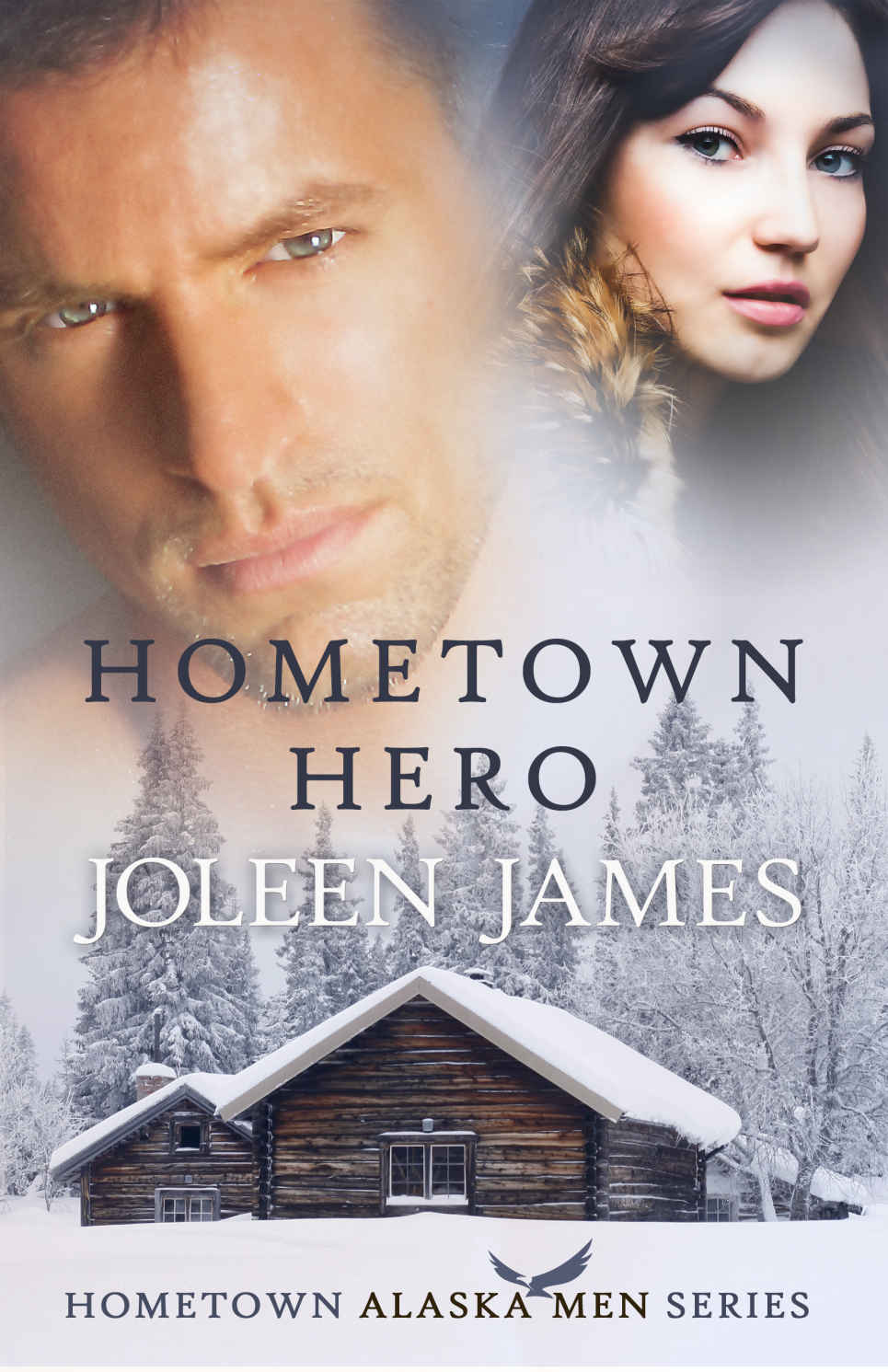 All rights reserved. Except as permitted under the U.S. Copyright Act of 1976, no part of this publication may be reproduced, distributed, or transmitted in any form or by any means now known or hereafter invented, or stored in a database or retrieval system, without the prior written permission of the author.

This book is a work of fiction. Names, characters, places, and incidents are the product of the author's imagination or are used fictitiously. Any resemblance to actual persons, living or dead, business establishments, events, or locales is coincidental.

Copyediting by The Grammar Chick

For SJ and CJ. Love you with all my heart!

She was being followed. Again.

Tawney O'Hara let herself into her apartment, deadbolted the door, then tossed her purse and mail onto the kitchen counter. On her way to the window, she shrugged her jacket off. Where was the dark sedan? She'd noticed the car in her rearview mirror twice last week and then again today. Or was she just being paranoid?

A tumbleweed rolled across the parking lot in a cloud of cold January dust. No sedan. Fox was trying to scare her, and it was working. Why wouldn't he leave her alone? The man was clever. Since she'd issued a restraining order against him, he hadn't confronted her; instead he'd had someone follow her. She'd begun to find little gifts—one in her dressing room at work, one on her front doormat. The worst gift had been the emerald ring he'd had delivered along with two dozen red roses after the show Friday night. There had been no card, but she had known the flowers and expensive ring had come from him.

She'd sent the ring back the following day, certified mail, to his place of business, The Fox Club. She'd told the police about the gifts, but with no proof of who'd actually sent the items, she couldn't use them as evidence against him. As far as the police were concerned, Fox hadn't violated the restraining order. He hadn't come anywhere near her.

Satisfied the black sedan had moved on, Tawney switched on the heat. The hum filled the quiet space in her apartment. While she waited for the air to warm and her nerves to settle she flipped through her mail.

Bills, bills and more bills. And an envelope from her sister Star. Seeing her sister's handwriting brought tears to her eyes. Star. Oh, she needed Star right now. She needed her sister's calm, her take charge attitude. Tawney needed to feel safe, something she hadn't felt in a very long time.

She tore open the envelope.

Brad, Finn, and Emma O'Brien invite you to witness the marriage of their father, Cade O'Brien to Starlene White.

Please join us for the celebration of Cade and Star's love on Valentine's Day, February 14th at two o'clock in the afternoon.

Star was getting married! What did it feel like to be that happy, to be in love with someone, to have someone care about you so much? Star and Cade had true love, not this sick twisted obsession Fox Lassiter had with her.

Maybe her sister Ruby was right, dancing in a burlesque show just invited trouble. More than once men had assumed something about her that wasn't true. All she'd ever wanted to do was dance. Well, maybe she'd pictured herself wearing more clothes, but the show was her reality.

Calmer now, Tawney headed for her bedroom. She needed a hot shower followed by a glass of wine. She sat on the end of the bed and removed her boots, taking a minute to rub the bone spurs at the base of both big toes. Bone spurs, hazard of the job—and she was only twenty-eight. Ugh. She stood and began unbuttoning her blouse, and that was when she spotted it—a familiar ring box placed just so on her pillow.

No, no, no! She couldn't breathe. Tawney spun around. Terror zipped through her body, nearly bringing her to her knees. The ring was back, here in her apartment. How had Fox gotten in? Was he here? She raced from the room, to her purse, locating the gun inside. Her heart beat so loudly she could hear the roar in her ears.

Even her apartment wasn't safe anymore. Where could she go, who could she trust? The police were all in Fox Lassiter's pocket. She couldn't prove the man had been in her apartment. She needed to think.

Fox was too smart to be here now. This was intimidation at its best. A slow fury started in the pit of her belly—anger at Fox, anger at the law, anger at herself for letting Fox control her with fear. Tawney's finger curled around the trigger of her small pistol.

"If you're in here, I'll shoot you. I swear to God, I will. I'm done, Fox. Done." In the bedroom now, Tawney threw the closet door open. Nothing but clothes. Her heart drummed. Adrenaline burned through her veins like wildfire. Tawney pressed on. She checked the shower and under the bed. A trickle of sweat ran down her back.

She threw open the hall closet.

Her breath came in ragged gasps now. She set the gun down on the coffee table, pressing her hands together to stop the trembling.

Fox had a key to her apartment. He'd sent her a message. He could get to her anywhere.

She'd never been a dramatic person, but a sixth sense told her it was time to make changes, and she couldn't share those changes with anyone, not even and especially the police. Everyone knew that Fox had "friends" in the police department. There wasn't a single person in Vegas she could trust. An instant sadness filled her. She had no one here.

She'd had some time to think about leaving town. The time had come to put her plan into action.

Tawney dragged her suitcase out from under the bed. Quickly she packed a few items of clothing, not everything. She didn't want it to look like she'd left town. She filled the suitcase with personal items and papers she didn't want to leave behind. The ring box caught her eye. She opened the box, making sure the gaudy emerald was inside. The square cut stone winked at her, watched her. She'd looked the ring up online. She knew its appraised value. Thirty-two thousand dollars.

Fox Lassiter didn't know it yet, but he'd given her the means to leave town and start over.

Tawney tossed the ring into the suitcase and zipped the bag closed.

For a second, power filled her, made her brave, strong. She could do this. She could disappear. Her fingers steady now, she put her gun back into her purse. Before she stepped outside into the parking lot, she made a visual check for the black sedan. Not seeing the car, she walked calmly to her vehicle and placed her bag in the trunk. She glanced around again, finding nothing out of the ordinary.

Two tumbleweeds rolled by. Iron gray clouds had gathered. A storm was coming. Could she outrun the rain? She had at least two hours until sunset. Despite the chill in the air, a river of nervous sweat ran between her breasts.

Tawney got in her car, placing her purse with her pistol on the passenger seat within easy reach. She had one stop to make, and she gave a silent prayer she wouldn’t see the black sedan in her rearview mirror before she left this town behind for good.

She needed somewhere to hide, to start over, and there was only one place she could go—a place that only her immediate family knew about, a place where she'd be safe and loved.

She was going home to Alaska.

Rick Tabor exited the post office, letting the door swing shut behind him. The frozen air felt like shards of glass against his cheeks. Man, he couldn't wait for the temperature to warm up. He was sick of snow, of cold, of ice. He craved the sun, needed the heat to chase the frigid cold from bones that never got warm.

Maybe the time had come to move on from Alaska. This town had served a purpose. He'd come home to recover, to get his head on straight, and he'd done that, hadn't he? Four months had passed and the nightmares came less often now. The wound on his arm had healed. Most days he couldn't tell that his front teeth were artificial. His jaw didn't ache anymore. Physically, he'd never felt better. Mentally? His mouth twisted into a smirk. The answer to that question depended on who you asked.

He glanced at his watch. Four o'clock, Friday afternoon. The locals were starting to end their shifts at work. Many would have paychecks and be eager to spend them, ready to let off steam from a workweek spent at any number of jobs. There were already cars parked in front of the curb at the local bar where he worked, The Junebug.

Glad that today was his day off, Rick darted across the street. Before he hit the sidewalk, two men spit out of The Junebug. The men crashed to the boardwalk, fists flying.

"Damn." Rick picked up his pace. He'd nearly cleared town. Another minute and he would have been past The Junebug and on his way to his cabin, twenty miles from town.

"Stop it, now!" Rick's aunt, June Crandall, cried. She stood in the open doorway of the bar she owned, her hands on her hips. "That's enough." Then when she saw him, "Thank goodness you're here, Rick. Do something."

Rick reached down and yarded up local troublemaker Harvey Yates. "What's this about, Harvey?"

Harvey stopped swinging and pointed at the other man. "What right does he have to come in here and try and lift our women?"

The other man pushed to his feet. Blood oozed from a small cut on his upper lip.

"All I did was offer to buy the lady a drink," the tourist said. "Thought I'd do something nice."

"I saw her first," Harvey said, shaking his fist. "I was already talking to her."

"And she wasn't receptive," the tourist shot back.

"Aw," Harvey muttered. "Hell. It's Friday night. What am I supposed to do now?"

"Why don't you both take off," Rick suggested. "Otherwise, I'll be asking who wants to press assault charges."

Both men seemed to consider his words. The tourist turned away first.

Harvey spat on the ground. "Rick, maybe you need to tell your buddy, Cade, to keep a tighter leash on his guests."

"Take off, Harv," Rick said, in no mood to argue with a drunk. He knew Harvey's MO. He started drinking around noon—every day. He'd escorted Harvey from the bar numerous times in the four months he'd worked as a bartender and bouncer at The Junebug. The man was an alcoholic but basically harmless.

"Locals should stick together," Harvey said. "Maybe you've forgotten where your loyalties should lie. After all, you were gone from this town for ten years."

"Harvey," June warned from her place on the sidewalk. "You're on thin ice."

"Nothing like nepotism," Harvey said with a head nod toward Rick.

"Rick's not here as my nephew," June said, her hands on her hips. "He's here because you won't play nice."

Rick stared the man down until Harvey turned and strode away, muttering a string of profanity under his whisky-soaked breath.

"Trouble started over a woman?" Rick asked. Before he got his answer, a woman stepped out of the bar.

Wind stirred her long, dark hair. She wrapped her arms around her torso to ward off the bitter cold.