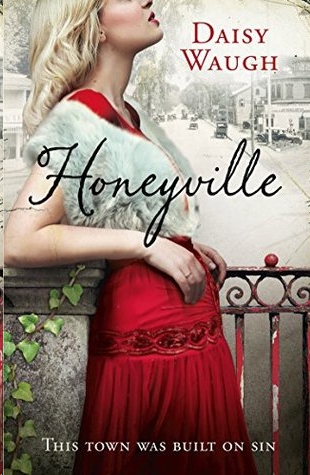 The following are copyright lines to be used as applicable

Daisy Waugh asserts the moral right to be identified as the author of this work.

The Nice People of Trinidad © Max Eastman published in The Masses July 1914 reprinted with permission of the Estate of Yvette Eastman.

‘The delicately constructed plot keeps you guessing until the end’

‘Written in deft, engrossing prose, this story is dizzy with glamour and heartbreak’

Wilson, Jenny Wilson
This book is for you.

Read on for more from Daisy Waugh

I saw Max Eastman last night. He turned up at dinner very late, apologizing to us all as if the evening had been on hold for his arrival, and it occurred to me how lonesome it must be to shine the way Max does, to feel that you can never simply slide into a room and sit down. I don’t think he knows any other way to behave, except as the star of the show.

He arrived with a little writer friend – one of these East Coast novelists, trying to recoup a living from the studios. I don’t remember his name. There were twenty-five or so places laid at the table and I had no idea Max was joining us. Our hostess never mentioned it – I imagine because she wasn’t aware of it herself, until he walked through the restaurant door. Max Eastman is quite a celebrity, after all. And we do love a celebrity in this town.

When he loped into the room last night, I’ll be honest: my heart stopped. And this morning, when I opened my eyes, my face was covered with tears. I’ve never experienced it before – to wake, from crying. Had I been dreaming? I can’t remember. But I woke with a hundred images swimming through my head. Of Trinidad, Colorado, as it was almost twenty years ago. Of Xavier, as he was then. Of myself. Of Max and Inez as they were together; and the blood drying on the old brick pavements.

I still have the letter she wrote to him, its envelope spattered in Trinidad’s blood. When he loped into the room I felt many things: shock, delight, anger, affection, regret … and an image of the damn letter came to mind, yellow with age, brown with blood, nestling at the bottom of my jewel box. I felt ashamed. I should never have read it. I should have sent it on to him twenty years ago.

There was an empty place beside me at the long res- taurant table, and Max flopped himself into it with the same long-limbed, bashful elegance that was ever his.

‘Is it taken?’ he asked, though he’d already pulled back the chair.

‘Please!’ I said. ‘Sit!’ But I didn’t look at him directly. I was embarrassed. Either he would recognize me or he wouldn’t, and I wasn’t prepared for either.

Max made himself comfortable. He took the napkin from his empty plate and dropped it still folded onto his lap. He reached for the wine and sloshed it into both our glasses. He had been at the theatre, he explained, having sat through what was ‘possibly the lousiest play I’ve seen all year. And I only went out of loyalty. Which is
always
a mistake, isn’t it? Now I shall have to think of something encouraging to say about the damn thing … And I’m terribly fond of the writer, so God knows, I’ll have to come up with something …’

He asked if I had seen the play. I told him not, although I had heard good things spoken of it. ‘Well
don’t
!’ he cried. ‘If your life depends on it.’ And he proceeded to pull the wretched thing apart.

‘
Max, old chum
!’the East Coast novelist shouted at him across the table.
‘
Forget about the darned play, won’t you? I’ve been telling the guys about your adventures in Marmaris. Why don’t you tell them yourself?’

‘Not Marmaris,’ Max said, looking pained. ‘I was in Büyükada.’ He pronounced it
Buy-u-khad-a
with the soft notes and little hisses, like a man who knew what he was about.

He had just returned from a week in
Buy-u-khad-a
, he explained, visiting with his old friend-in-exile, Leon Trotsky.

‘I’m amazed he’s still alive,’ the novelist said. ‘It can only be a matter of time before Stalin sends his people to take a pop.
’
He made a limp white pistol shape of his hand.

And Max was off. It was his favourite topic: if not the domestic particulars of Trotsky’s new life in Turkey (which fascinated us trivial Hollywood folk), then the failure of communism, the evil of Stalin, the tragedy of post-revolution Russia. His trip to Büyükada had obviously been a failure.

‘It was quite a trek, after all. To come from Antibes, and I came with one single object in mind: to offer comfort to my old friend. Because he simply
exists
out there, you know? Plotting and brooding –
waiting
. It’s rather pathetic. One ear out for the
pop
.’

‘Last time I laid eyes on the fellow we were in Moscow!’ Max continued. ‘Stalin was a nobody – a booby. A nothing. It was Leon who held the future in his hands … We believed in a new world … We were
friends
!’ Max paused. He fiddled with his napkin, furrowed his brow and I don’t suppose there was a person at the table who didn’t want to stretch across and smooth it for him. ‘Do you know,’ he said at last, ‘in all the week he and I spent together in Büyükada, Leon didn’t ask me a
single question
about my life.’He looked around at the table. ‘Isn’t that rather extraordinary?’

The conversation turned back to movies. (You can’t keep the conversation from movies for long in this town.) They were discussing the special effects in
King Kong
but I couldn’t contribute. After a moment or two, Max turned to me: ‘I’m guessing you and I may be the only people in this town who haven’t yet watched it, right?’

And then, finally, came the pause I suppose I had been waiting for. He took up his wine glass, and slurped from it in a show of nonchalance – not for me, but for everyone else. He leaned in close.

‘Well of course we have, Max,’ I said, maybe just a half-second late. I had almost lulled myself into imagining the danger was passed. I smiled into his honest eyes, until he blinked. ‘Don’t tell me you have only now remembered?’

‘Certainly not,’ he said. ‘I spotted you at once! Why do you think I made such a beeline for the seat?’

‘It was the only one that was empty.’

He laughed, and shook his head. ‘You know, you don’t look a day older,’ he said.

And I said – the difference being that, in his case, except for the grey in his hair, it was true: ‘Neither do you, Max. Not a day older. You must have a portrait in an attic somewhere.’

‘Ha! Yes. I think maybe we both do. Gosh – but it’s
terrific
to see you, Dora. I mean … Don’t you think so?’ He sounded uncertain – as uncertain as I felt. ‘It’s too incredible! Here we are.
Still standing.
After all these years.’

‘Here we are,’ I repeated. ‘Still standing!’

‘Oh, but you
must
know I recognized you, Dora!’ He sounded a little petulant. ‘How could I possibly not?’

‘Well, I recognised you, of course. But you’ve gotten so famous since. I see your photograph.’ I smiled at him. ‘I guess I had the advantage.’

‘I would have greeted you as soon as I sat down. But then when you didn’t acknowledge me …’ He looked so tactful and tortured I had to struggle not to laugh. ‘I imagine that your particular situation … I mean, you look so terribly
well,
Dora
.
And I didn’t want to advertise the circumstances. Not that …’

‘Well, it would be nice if you didn’t stand on the table and shout the absolutely exact circumstances. One has to maintain a semblance of respectability. In these autumn years. Don’t you think? Even in Hollywood.’

‘Ha!’ he bellowed. ‘We surely do! Even in Hollywood!’ We laughed, and the long years since last we met seemed to fade away. ‘Well, I apologize,’ he said. ‘Please accept my apology. I was trying to be chivalrous. In my oafish way. But I’m a fool. I see it now.’

His hand was on the table top between us, long fingers busy rolling small crumbs of bread. So much anxious energy still! I felt a rush of affection for him. ‘Dear Max,’ I said. ‘Ever chivalrous.’ He grimaced, as well he might. But I had meant it. At least, I had meant it up to a point.

The novelist was yelling at him again – something emphatic about Charlie Chaplin. This time Max ignored him. He said: ‘You remember that crazy evening, Dora? The first night. It was anarchy – the striking miners had taken over the streets, and she was just buzzing with it all. I never saw a woman quite so
alive.
I remember looking at her that night – in the Toltec saloon – with the guns rattling out there on Main Street. She was beautiful. God. The woman of my dreams. I think I fell in love, right there and then.’ He laughed, shaking his head. ‘Don’t you remember? It was so damn exciting.’