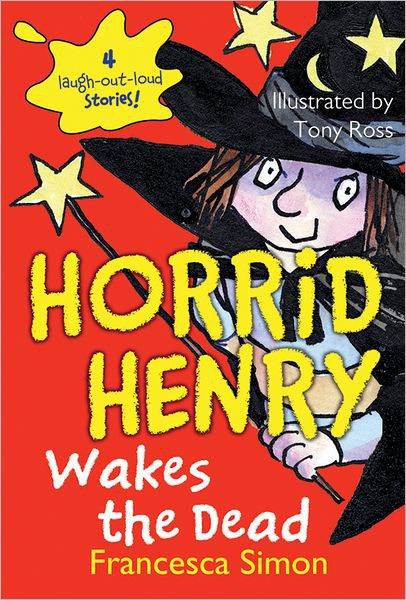 All rights reserved. No part of this book may be reproduced in any form or by any electronic or mechanical means including information storage and retrieval systems
—except in the case of brief quotations embodied in critical articles or reviews—without permission in writing from its publisher, Sourcebooks, Inc.

Originally published in Great Britain in 2009 by Orion Children’s Books.

1. Horrid Henry and the TV Remote

Horrid Henry pushed through the front door. Perfect Peter squeezed past him and ran inside.

“Hey!” screamed Horrid Henry, dashing after him. “Get back here, worm.”

“Noooo!” squealed Perfect Peter, running as fast as his little legs would carry him.

“All together now! Who’s a silly Billy?” trilled the world’s most annoying goat.

It had happened again. Just as Henry was looking forward to resting his weary bones on the comfy black chair after another long, hard, terrible day at school and watching
Rapper Zapper
and
Knight Fight
, Peter had somehow managed to nab the chair first. It was so unfair.

The rule in Henry’s house was that whoever was sitting in the comfy black chair decided what to watch on TV. And there was Peter, smiling and singing along with Silly Billy, the revolting singing goat who thought he was a clown.

Henry’s parents were so mean and horrible, they only had one teeny tiny TV in the whole, entire house. It was so minuscule Henry practically had to watch it using a magnifying glass. And so old you practically had to kick it to turn it on. Everyone else he knew had tons of TVs. Rude Ralph had five ginormous ones all to himself. At least, that’s what Ralph said.

All too often there were at least two great shows on at the same time. How was Henry supposed to choose between
Mutant Max
and
Terminator Gladiator
? If only he could watch two TVs simultaneously, wouldn’t life be wonderful?

Even worse, Mom, Dad, and Peter had their own smelly shows
they
wanted to watch. And not great shows like
Hog House
and
Gross Out
. Oh no. Mom and Dad liked watching…news. Documentaries. Opera. Perfect Peter liked nature shows. And revolting baby shows like
Daffy and her Dancing Daisies
. Uggghh! How did he end up in this family? When would his real parents, the King and Queen, come and fetch him and take him to the palace where he could watch whatever he wanted all day?

When he grew up and became King Henry the Horrible, he’d have three TVs in every room, including the bathrooms.

But until that happy day, he was stuck at home slugging it out with Peter. He
could
spend the afternoon watching
Silly Billy
,
Cooking Cuties
, and
Sammy the Snail
. Or…

“…and the black knight lowers his visor…”

“Give it to me,” shrieked Peter.

“But I’ve got the chair,” wailed Peter.

“So?” said Henry, waving the clicker at him. “If you want the remote you’ll have to come and get it.”

Peter hesitated. Henry dangled the remote just out of reach.

Perfect Peter slipped off the comfy black chair and grabbed for the remote. Horrid Henry ducked, swerved, and jumped onto the empty chair.

“…And the knights are advancing toward one another, lances poised…”

“Did not, wibble pants.”

“Henry’s annoying
me
,” whined Peter. “He pushed me off the chair.”

Mom ran in, and grabbed the remote.

“I’ve had it with you boys fighting over the TV,” shouted Mom. “No TV for the rest of the day.”

Horrid Henry paced up and down his room, whacking his teddy, Mr. Kill, on the bedpost every time he walked past.

He had to find a way to make sure he watched the shows
he
wanted to watch. He just had to. He’d have to get up at the crack of dawn. There was no other way.

And then Horrid Henry had a brilliant, spectacular idea. What an idiot he’d been. All those months he’d missed his fantastic shows…Well, never ever again.

It was the middle of the night. Horrid Henry crept down the stairs as quietly as he could and tiptoed into the living room, shutting the door behind him. There was the TV, grumbling in the corner. “Why is no one watching me?” moaned the TV. “C’mon, Henry.”

But for once Henry didn’t listen. He had something much more important to do.

He crept to the comfy black chair and fumbled in the dark. Now, where was the remote? Aha! There it was. As usual, it had fallen between the seat cushion and the armrest. Henry grabbed it. Quick as a flash, he switched the TV over to the channel for
Rapper Zapper
,
Talent Tigers
, and
Hog House
. Then he tiptoed to the toy cupboard and hid the remote control deep inside a bucket of multicolored blocks that no one had played with for years.

Why should he have to get up to grab the comfy black chair hours before his shows started when he could sleep in, saunter downstairs whenever he felt like it, and be master of the TV? Whoever was sitting in the chair could be in charge of the TV all they wanted. But without the TV remote, no one would be watching anything.

Perfect Peter stretched out on the comfy black chair. Hurrah. Served Henry right for being so mean to him. Peter had gotten downstairs first. Now he could watch what
he
wanted all morning.

The Witch Maker by Sally Spencer
Somewhere Beneath Those Waves by Sarah Monette
Mark of the Hunter by Charles G. West
Jace (River Pack Wolves 2) (Paranormal Romance) by Alisa Woods
Kris Longknife: Tenacious (Kris Longknife novellas Book 12) by Mike Shepherd
A Deal With the Devil by Louisa George
For Love Alone by Christina Stead
The Choir by Joanna Trollope
The Dream Master by Roger Zelazny
Duel of Hearts by Elizabeth Mansfield
Our partner