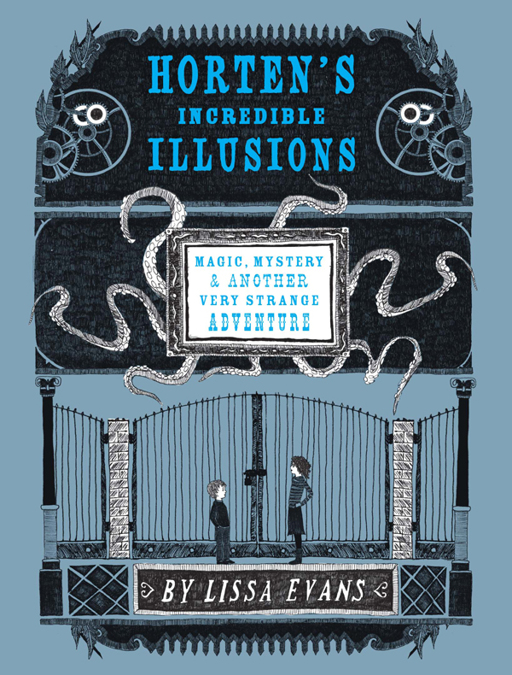 All rights reserved. No part of this publication may be reproduced, stored in a retrieval system, or transmitted, in any form or by any means, electronic, mechanical, photocopying, recording, or otherwise, without prior written permission from the publisher.

Published in 2012 in Great Britain as
Big Change for Stuart.

And who was always the first to read mine.

Stuart Horten sat at the kitchen table and looked at the front page of the crummy little newspaper he’d just been given. Then, with a feeling of foreboding, he began to read.

Stuart Horten (10, but looks younger) moved to Beeton at the start of the summer vacation, less than a month ago, but already claims to have made a huge discovery. His great-uncle Tony Horten (known as “Teeny-Tiny Tony Horten” because he was very short) was a famous stage magician who disappeared in 1944, leaving the whereabouts of his workshop unknown.

It turns out that it is in a huge underground room beneath the bandstand in Beeton Park. This was revealed during last week’s Beeton Festival children’s talent contest, when the floor of the bandstand gave way while a group of ballet students was performing. Stuart admits that the collapse of the floor was his fault, because he turned an underground wheel “by accident.”

Stuart claims that he “figured out” where the workshop was by “following some clues” — though he refuses to tell this reporter what those clues were. He also claims ownership of the contents of the workshop, which consist of various tools and workbenches, and a selection of magic tricks used in his great-uncle’s stage act. “They are definitely mine,” claims Stuart. “My great-uncle left them to me.”

When asked if he could prove this in any way, he thought for a bit, and then admitted he couldn’t.

Beeton Museum has agreed to give a temporary home to the contents of the workshop. The curator, Rod Felton, said, “This is an exciting discovery for Beeton. Though not quite as exciting as if it had been some kind of Roman weapon, like a ballista.”

Stuart (who is 10, but looks younger) claims that—

“Why do your sisters keep writing that?” asked Stuart indignantly.

“Keep writing what?” asked his friend and next-door neighbor, April Kingley, who’d brought him the paper. “You mean
ten, but looks younger
?”

April shrugged. “Reporters have to have proof.”

Stuart rolled his eyes. The Kingley triplets were always referring to themselves as “reporters,” as if they were writing for some important national newspaper, instead of a flimsy four-page hand-out, invented as a vacation project, printed out in their bedroom, and forced on the neighbors.

He couldn’t face reading the rest of the article, and instead turned the paper over and looked at the back page.

Jeannie Carr, mayoress of Beeton (and owner of the Tricks of the Trade magic trick factory and school of stage magic), has not been seen since she went to investigate the room underneath the bandstand. Her assistant, Clifford Capstone (42), claims she was so upset by the damage to the bandstand floor that she decided to resign as mayoress immediately and go on vacation—though he was unable to say where, or for how long.

“Longer than you think,” muttered Stuart. Yet another thing he couldn’t tell the other two Kingley sisters was that the “vacation” Mayoress Jeannie Carr had gone on was likely to be permanent, seeing as the Well of Wishes had transported both her and Stuart back to the 1880s, and only Stuart had returned.

“I wonder what Clifford will do now?” April asked idly. “I know he was desperate to be a magician, but I don’t think Jeannie ever taught him anything useful.”

There was no other news in the paper—only a list of special sales and trash collection times. Right at the bottom of the back page was a photograph captioned:
Our ever-ready staff, April, May, and June Kingley
. The three clever-looking faces were identical, apart from the fact that April wore glasses.

“Is the photo going to be changed,” he asked her, “now that you don’t write for it anymore?”

She shook her head. “I might stay on. I told June that I didn’t want to be the crime reporter anymore, but then she said they were looking for an arts correspondent.”

“Someone who’ll write about local plays and exhibitions and things. And I thought it might be quite interesting so I’ve applied for the post. I’ve got an interview this afternoon.”

Stuart gaped at her. “An
interview
?”

“Yes. We like to do things professionally. It’s at three o’clock, and they’ll let me know the result at four.”

Stuart tried not to laugh. In the short time he’d known April she’d proved to be clever, resourceful, courageous, and loyal, the absolute best sort of friend to have if you were in trouble or in danger. But she was also (he had to admit) a bit of a know-it-all and one of the bossiest people he’d ever met in his entire life. And her sisters were even worse.

“What are you smirking at?” asked April.

She looked at him suspiciously, and then the door opened and Stuart’s very tall father came into the kitchen.

“
Salve, o fili
,” he announced, just as the phone in the hall started to ring. He turned back to get it.

“What did your dad just say?” whispered April.

April nodded. Stuart’s father compiled crosswords for a living, and never used an ordinary, modern word if there was a medieval fourteen-letter alternative.

He reappeared after a few seconds. “A Mr. Felton is desirous of communication with you,” he said.

“Rod Felton, head curator at Beeton Museum here. You’re the youngster who claims to have found the magic tricks, aren’t you?”

“Yes,” said Stuart. “They belonged to my great-uncle.”

“Well, we’ve had an idea that might interest you. As a matter of fact, it’s a job offer. You’re still on your summer vacation, aren’t you?”

“Yes. For another two weeks.”

“Excellent. If you come to the museum this afternoon, I’ll explain….”