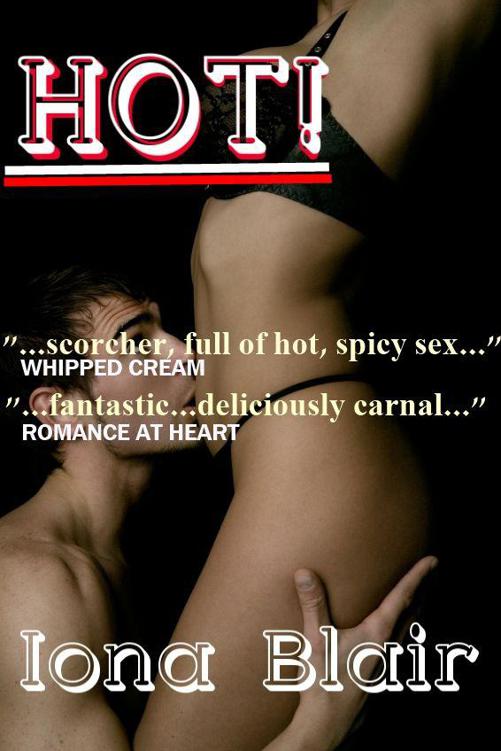 “Spend the night here.” Baxter set his wine glass on the bedside table and began to strip. His hard tanned body oozed sexuality.

“We’ll see.” Phaedra would usually agree in a heartbeat–she and Baxter had been lovers for ages–but tonight was different.

But she wasn’t so sure. She and Holly were closer than most sisters, and the nagging conviction that something was wrong just wouldn’t go away.

“Since she went to Vancouver, we’ve spoken on the phone every day. I haven’t heard from her now in almost two days.” She sat down on the bed and slipped off her stockings. “I’ve left several messages on her answering machine. It’s not like Holly to ignore me like this.”

Baxter, now completely naked, unbuttoned her blouse and unhooked her brassiere. “Maybe there’s a new man in her life.” He winked.

“Then Holly would have told me about him.” Phaedra unclasped her ponytail, and shook out her hair.“We’ve never had any secrets from each other.”

“You know you’re quite a looker for a vet.” Baxter deftly changed the subject. He ran his fingers across her nipples and cupped her breasts. “A blue-eyed blonde with a body to die for.”

“You’re not so bad, yourself.” She tried hard to escape her worries and enter into the spirit of the moment.

He brushed his lips across her throat and breasts. The ticking of the dresser clock the only sound in the hushed night around them.

“It’s so peaceful out here,” she murmured.“Far from the Madding Crowd.”

“Miles from the nearest neighbor.” He pulled her down on the bed and kissed her deeply on the mouth. “That’s why I’m a rancher. I like it..”

She felt desire surge through her like an electric current. “Fill me up,” she whispered and tipped her hips towards him. When he entered her she gasped and wound her legs around his waist.

His hard cock thrust inside her. His full balls banged against her ass.

“Oh gawd, this is good…good…”she moaned, as they climbed together in perfect tempo towards a crusher of an orgasm.

All the tension of the last two days drained out of her in one shuddering, ecstatic rush.

“Stay here the night,” he urged, his face bathed in sweat.

“No, I think I better get back. Just in case there’s some news of Holly.”

“But she’s got your cell number. And besides,” he added sheepishly. “There’s a foal I’d like you to take a look at in the morning.”

“Why you…” She laughed despite herself and relented. “Oh very well then. But I have to be out of here early. We’re breaking in a new receptionist at the clinic, and I visit the animal shelter as well.”

“How is your sister?” The elderly Mrs.Granger patted her collie while he got a rabies shot. “You must worry about her all alone in Vancouver.”

A twinge of guilt shot through Phaedra. She had been so busy all morning–her partner, Ailsa, had been called out to a calf birthing–that she’d scarcely had a chance to think about Holly.

“She’s fine.” Her smile belied the concern that broiled inside.

“I never could understand,” Mrs.Granger clipped the leash to her dog’s collar. “Anyone leaving a friendly little town like this, to live in a god forsaken city full of strangers.”

“Holly’s work took her there. She teaches autistic children.”

“It must have been lonely for you two, losing your parents at such a young age.”

Phaedra winced, as memories of the six car pile up on an icy highway came flooding back. “It wasn’t easy, though Holly and I were lucky to have each other.”

Mrs.Granger nodded. “Well give her my regards when you talk to her next.”

But when will that be, thought Phaedra unhappily?

Over lunch, after another unsuccessful attempt to contact Holly by phone, she decided to go to Vancouver. “There’s something wrong, I know it,” she told Baxter. “Ailsa can hold the fort for a couple of days. I’m going to try and make the seven o’clock ferry.”

“When did you last talk to your sister?” The detective’s name was Curtis Roth. Phaedra was attracted to him immediately. He had cropped brown hair and blue eyes. It was as if time stood still, while all around them the Police building bustled with activity.

“Three days ago.” She fixed her eyes on the window behind him. Someone had spiked the courtyard fountain with soap powder. On the horizon, the North Shore Mountains loomed like stone giants. That this kind of sudden attraction should hit her now, was bad timing on the part of Cupid, she thought helplessly.

“And you’ve checked her apartment, and there’s nothing unusual there?”

She nodded. “There’s no sign of a struggle, if that’s what you mean. It looks like she packed a suitcase and her car’s gone.”

“What about work? Did she show up there?”

“I think you’re worrying unnecessarily, Dr.Wharton. Your sister’s on vacation. She’s gone away for a few days.”

“Not without telling me,” Phaedra insisted. “Holly had no intention of going away. She had scads of work to catch up on. Something is very wrong.” Tears burned hot behind her eyes.“She must have met with…foul play. Please do something. Please look for her.”

“We’ll do everything we can,” he assured her. “We’ll need the make and license number of her car, and a recent photograph if you have one.”

Phaedra dug into her bag. She had anticipated this and come prepared.

“You look very alike,” he remarked, examining the photo.

“Holly’s a couple of years younger than me. I always think of her as my baby sister, and feel very protective towards her.”

“That’s understandable. I feel much the same about my younger brother.”

When she was leaving, he touched her lightly on the arm. Phaedra started guiltily as a thrill shot through her from the magic of his touch. “Try not to worry, Dr.Wharton. I’m sure everything’s going to be okay.”

Standing this close she could feel the magnetic pull of his chemistry driving her hormones wild. It took every shred of willpower she possessed not to reach up and kiss him on the lips. Of course, she was exhausted and worried, that must explain it. She felt almost delirious. “Call me Phaedra, please,” she murmured and beat a hasty retreat.

“I miss you already.”  Baxter had telephoned, as Phaedra was about to have a shower. It was chilly in Holly’s apartment, which overlooked the harbor, and noisy with the boom of foghorns.

“I miss you too.” But she realized it wasn’t entirely true. She was too worried about Holly, and plagued with hot thoughts about the handsome detective to miss anyone. “And it doesn’t look as if I’ll be home anytime soon.”

There was a prolonged silence at the other end of the line. “Hello…are you still there?”

“Yes,” he responded wearily. “You already know what I think. Holly is a big girl now, and she’s gone off on a fling with some sexy dude.”

“I don’t buy it, and you know that.” She felt cold and tired, and just wasn’t in the mood for this kind of crap. She switched on the electric fire and warmed her toes at the grate.“We’ve been all over this before. Holly would never go off like that without telling me first.”

“Okay…okay…don’t get your knickers in a twist…talking of which, what are you wearing, sweetheart?”

Baxter’s voice was thick was lust and she knew he was looking for phone sex. It was something they had done before, when one of them was away.

“Look, I don’t think this is the right time. I doubt I could get really into it.”

“It’s what you need, Phaedra. Release all that pent-up tension. Now I want you to lick your fingers for me until they’re nice and wet and then stroke your nipples.”

She did as she was told. Baxter’s voice had a hypnotic quality that was difficult to resist. She could feel desire stir in her breasts and belly.

“Now wet your fingers again, and this time rub them over your pussy.”

She moaned and circled her clit until it was hard as flint. “Are you touching your cock,” she murmured. “Grasp it firmly for me and pump it. Pump it hard.”

“Ah yes…yes…” he groaned. She could hear the vigorous hand job he was meting out to his hardness. He banged his cock against the receiver, and told her he was fondling his full balls.

She slipped a finger into her pussy and keeping a thumb on her clit, fucked herself until she came. “Come for me now,” she ordered Baxter, and they hit the high note together.

Phaedra moved restlessly around Holly’s apartment. From the balcony she could see the lights of Vancouver, sparkling like jewels against the black velvet backdrop of the night.

“What happened to you, Holly?” she whispered into the hushed silence. It had been almost a week now since her sister had gone missing.

“You might as well come home,” Baxter had said. “I mean, what good are you doing there?”

“Try to understand. If I pack up and leave now, it would be like deserting Holly. I know she’s in trouble.”

“Oh suit yourself then, but do you think you’re being fair to Ailsa?”

“Ailsa has brought in another vet to assist her, until I get back.”

“Well that’s hardly the same as having you around. You’re needed at the clinic, Phaedra, and I need you too.”

“Look just try to be patient, please. I know it probably makes no logical sense for me to remain here, but it’s something I just have to do.”

But if it wasn’t for a certain dishy detective, would I be so anxious to stay, she wondered, as the first streak of dawn lit the eastern sky. She switched on the electric fire and warmed her hands at the grate.

Why did this have to happen now of all times? She felt as foolish as a gauche teenager, and guilty too. Not only for the disloyalty to Baxter, although heaven knows there was nothing she could do about how she felt, but to Holly as well. For instead of worrying about her sister every minute, as she should be, her thoughts were constantly straying to Curtis and what she’d love him to do to her. Then she would admonish herself for acting like a bitch in heat.

She closed her eyes and listened to the world waking up all around her. Baxter seemed so far away in this densely populated urban setting. He was truly a creature of the wide-open spaces. She wondered if she’d ever really loved him? Or, if there’s had been a relationship borne out of convenience and perpetuated by habit?

The ringing of the telephone snapped her out of her ruminations. It was a wrong number, and she felt relieved. She had been afraid to answer it, in case it was the worst possible news about her sister. She was bracing herself for this, yet hoping for a miracle as well.

She plugged in the kettle and spooned some instant coffee into a mug. Curtis had phoned her a couple of times, to keep her informed about the steps they were taking to find Holly. “We’re still not convinced that she hasn’t just taken off for a few days,” he said. “But nevertheless, we’re not taking any chances.”

The sound of his voice had sent her pulses racing. It had hardened her nipples and left her pussy wet. He must feel it too, although, he certainly didn’t show it. She felt confused and silly at the same time. Surely an attraction this strong must be mutual?

But there again, perhaps he didn’t find her attractive? Maybe he was married, or in a long-term committed relationship? Or good lord, he might even be gay? These thoughts tormented her as she buttered a slice of toast and listened to the mating call of a chickadee from a nearby park.