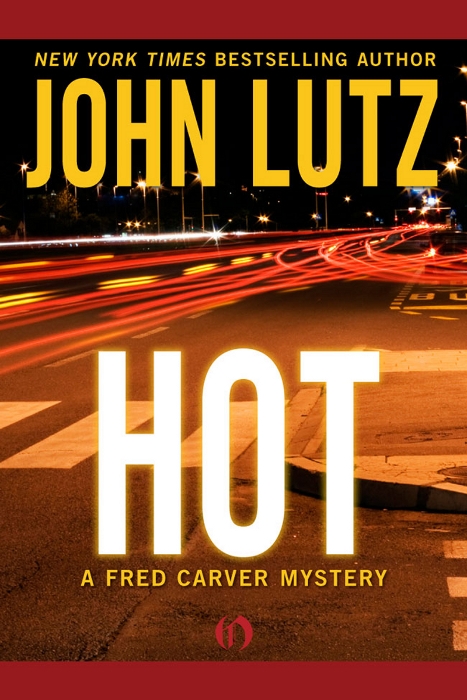 A Biography of John Lutz

When the sun sets, shadows, that showed at noon

But small, appear most long and terrible.

B
EAUTIFUL!
Carver thought. He was sitting by his office window, watching two women walk past on the other side of Magellan. They were young and elegantly built, and the warm breeze off the Atlantic molded their lightweight dresses to them as they leaned forward gracefully and tried in vain to hold their hairdos in place. If I were a painter, he thought, I’d do a “Women in the Wind” series of canvases. But he wasn’t a painter. A couple of rooms long ago, and a house once. That was it.

As the women passed from view beyond the cream-colored stucco Del Moray courthouse and jail, Carver wondered if really he appreciated them because of his bad leg, because they moved so beautifully and with an ease he now felt only in the water when he took his therapeutic morning swims in the sea.

“I knocked,” a voice said, “but nobody answered.”

Carver turned away from the window and the outside glare, swiveling slightly in his desk chair. The man who’d entered his office was tall, lanky, gray-haired, with pale blue eyes and a ruddy complexion. He had broad shoulders without much meat on them, and thick wrists with veins like fire hoses. He had to be pushing seventy, an aged Viking.

“You Fred Carver,” the man asked, “the detective that used to be in the Orlando department?”

Carver said he was.

“You got shot in the knee by a punk holdup man, I hear, and had to pack it in and go private. Walk with a cane now.”

“That’s the way it is,” Carver said, wondering why the old man had researched him.

“I got shot myself once, but not so serious it made me change my line of work.”

“Henry Tiller, here.” The man shuffled closer and extended a huge hand. Carver shook it. Tiller’s grip was dry and powerful. He had about him the smell of stale tobacco. “I was a cop in Milwaukee for a while, then in Lauderdale. Made sergeant. Worked plainclothes for the last couple years in Lauderdale, before I took retirement. I’m living down in the Keys these days.”

Carver waited for Tiller to get to the point, but the rawboned old man simply stood and took things in for a long moment, his flat cop’s eyes scanning the office in the way Carver knew so well. Once a hunter always a hunter.

“Hope so. A mutual friend, Lieutenant Desoto, told me I should maybe look you up as the answer to my problem.”

Carver’s interest heightened. Lieutenant Alfonso Desoto of the Orlando Police Department didn’t refer people to him lightly. Tiller must have something the police couldn’t or didn’t want to deal with, but which shouldn’t be ignored. That was the classification most of Carver’s Desoto-referred cases fell into. Or maybe Tiller was here because he was an ex-cop, a lifetime member of the fraternity just like Carver, and Desoto figured there was a debt to be paid here.

“Wanna sit down and tell me your problem, Mr. Tiller?”

“Call me Henry, and I’d just as leave stand. Been sitting the last couple hours driving up from the Keys.”

“And your problem is?”

“I’m not sure. But I’m damned sure there
is
a problem. Since I retired from the department three years ago I been living down in Key Montaigne, little island halfway down the string of keys. Only way to get to it’s by a narrow bridge off Duck Key.”

Carver said he knew where Duck Key was.

“I bought a little cottage down there,” Tiller went on, “and I been living there alone. Wife cut and run from me fifteen years ago. You know how it is, cop’s wife.”

“Uh-huh.” Carver’s own marriage had broken up five years ago, probably for some of the same reasons Tiller’s had come unraveled. But there were other reasons as well, reasons he knew were his fault. Maybe he’d make the same mistakes even now.

Tiller stood with his giant’s ruddy hands at his sides and leaned toward Carver. He seemed to fill the room. “Even an old cop like me, Carver, I still got the instincts, you know what I mean?”

“I spent a lotta years on the force in Milwaukee, then served down in Lauderdale, plainclothes the last couple years. Rank of sergeant.”

Tiller had already mentioned that to Carver, but Carver didn’t point that out. What the hell, Tiller was an old man, and old men repeated things. “Them instincts tell me sure as snow in Buffalo something’s wrong on Key Montaigne.”

Carver assumed he meant Buffalo, New York, but he decided not to ask about it. “Wrong how?”

“My cottage is right near the water, and I can look out my window and see things happen on some of the neighbors’ grounds. One of them neighbors ain’t right.”

“Why do you think that?”

At least he remembered telling me that, Carver thought.

“Best I first tell you about Key Montaigne,” Tiller said. “It’s about halfway down the Keys. Population’s not even a thousand, with the ritziest places fronting the ocean. Small fishing industry. Lots of tourist trade, resorts, fishing cabins with boats, that sorta thing.” He absently waved a big hand, first and second fingers slightly extended and a cigarette-width apart. A longtime smoker. “Condos, condos, condos, and a couple of retirement communities. One town, Fishback, but it ain’t much—service station, a few restaurants, a strip shopping center, some tourist traps and places that sell bait. Also got the Southeast Oceanography Research Center down there, with an aquarium and all, so tourists can help pay for that, too.”

Carver said, “Sounds like a nice place to retire to,” wondering if that was true of any place.

“Would be,” Tiller said, “’cept for Walter Rainer. He’s got a big estate near my cottage, and I can see the back of it, including his boat dock, out my window. Things are going on over there, Carver.”

“Things?” Tiller was sounding more and more like a paranoid old man, but Carver reminded himself Desoto had directed him here.

“That Rainer smells corrupt as a four-day-old trout,” Tiller said. “Lives in his big house with his wife name of Lilly, ‘bout young enough to be his daughter. Got some employees, Hector Villanova, a Latino seems to be the do-everything whatchamacallit.”

“Yeah. Then there’s Davy Mathis, a geeky bunch of muscle got tattoos all over him, s’posed to be Rainer’s bodyguard, far as I can tell.”

“Why’s this Rainer need a bodyguard?”

“That’s one of the things I wanna hire you to find out, Carver.”

Carver said, “I need to know some specifics.”

Now Tiller did sit down. He settled into the black vinyl chair near the desk and crossed his long, bony legs. He was wearing brown loafers with tassels on them, the kind that should be golf shoes but aren’t. His baggy gray socks had bunched down and there was some sort of rash on his ankles, which were actually thinner than his wrists. He fumbled with a pack of cigarettes in his shirt pocket, not pulling it out, and said, “Rainer’s got hisself a boat, the
Miss Behavin’,
about a sixty-footer. It leaves his dock like it’s sorta sneaking away every once in a while in the early morning hours, when only an old man with insomnia might be awake. Rainer and that Hector and Davy do a lotta hurrying around in the dark, then the boat puts to sea, don’t come back till a couple nights later, so’s it can dock in the dark, just like when it left.”

Carver thought about that. “Tell you the truth, Henry, I don’t see much we can do with what you’ve told me. No law against when to put to sea, and maybe you only
think
Rainer and his employees are sneaking around. There’s a lot to the way we look at things.”

“Those people are into some bad shit, Carver. I heard Rainer talking a few times after I knew for sure he’d been gone to sea, and he lied when he was asked where he’d been. I heard him tell somebody that boat hadn’t been away from the dock for a couple of months, but I knew better. He’s lying to cover up something illegal. Every atom in my brain tells me that.”

Carver absently drummed his fingertips in sequence on the desk.
Thrrrrump! Thrrrrump!
He said, “Well, I see what you mean there.” But he wasn’t sure if he did. If lying was against the law, who’d be left to run the country? So far Henry Tiller hadn’t given him much in the way of hard facts.

Carver looked at him. “Huh?”

“Dead kid. Thirteen years old. Washed up on the beach.”

“No, no, farther down the island.” Impatiently. Carver just couldn’t catch on.

“Drowned, they say. I say cocaine killed him. There were traces of it in his blood.”

“Maybe he was tripping,” Carver said, “and went for a swim, got too far out.”

“Key Montaigne police chief, Lloyd Wicke. The kid was just another runaway got hisself fucked up on drugs, the way he sees it. The boy’s parents came from somewhere up north and claimed the body, and that was the end of it.”

“You don’t think it should be accidental death?”

“Hell, I dunno! But pieces don’t dovetail, you know what I mean?”

“No,” Carver said, getting exasperated. Henry Tiller had plenty to tell, but he had an oldster’s difficulty in getting it out in logical and comprehensible order.

“Evening after they came to Key Montaigne to claim the kid’s remains, I seen the boy’s father talking to Rainer in Rainer’s big gray Lincoln parked outside Fishback.”

Carver stopped drumming his fingers. The sound was getting on his nerves. “Could be coincidence. Or maybe they even knew each other from some time back, and Rainer was driving along and saw the guy. Or maybe the father’s rental ran out of gas and he was hitchhiking.”

“Coincidence and the Easter Bunny,” Tiller said angrily, fumbling again with his pack of cigarettes, this time so violently Carver could hear the cellophane wrapper crinkling.

“Okay, okay. You tell any of this to the Key Montaigne law?”

“Sure, to Chief Wicke hisself. Bastard didn’t take it too serious. Told me what I wanted to hear, then sent me on my way. I tell you, I got old and learned what it is to be a member of an oppressed minority.”

Carver said, “You think Rainer’s mixed up in drugs?”

“It’s sure as hell possible.”

“More possible than the Easter Bunny,” Carver admitted. “So what do you want me to do, Henry?”

“Go down there and investigate on the sly, find out what’s going on. I know
something
is.”

Carver leaned far back in his chair, extending his bad leg beneath the desk. “Why are you so interested, Henry?”

Tiller looked mystified for a moment, in that panicky manner of only the very young or very old, the momentarily or forever lost. “Why, I told you, I used to be a cop. Up in Milwaukee, then for a while in Lauderdale. I was plainclothes for a—”

Tiller stood up; he must have been an intimidating and powerful man when he was young. “You gonna give it a go, Carver?”

The Calling by Lily Graison
Mist upon the Marsh: The Story of Nessa and Cassie by Ronan, Mae
Killer Gourmet by G.A. McKevett
CICADA: A Stone Age World Novel by M.L. Banner
An Autobiography of Jack London by Jack London
Myrna Loy by Emily W. Leider
The Axe and the Throne by M. D. Ireman
Heartwood by Freya Robertson
Redeem Me: Oakville Series:Book Four by Reinhart, Kathy-Jo
Stephen Hawking by John Gribbin
Our partner