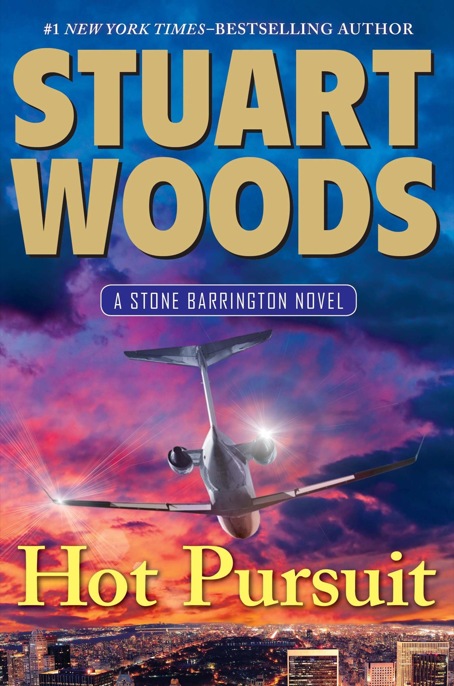 Shoot Him If He Runs
†

‡
A Will Lee Novel

This book is for Bill Bratton and Rikki Klieman.

STONE BARRINGTON STOOD
on a wide expanse of tarmac, leaning into thirty knots of icy wind, holding his hat on his head, his trench coat inadequate to the task of keeping his body temperature in the normal range. It was January in Wichita.

He watched as a thing of beauty made a turn and rolled toward him. It bore his tail number, but not on the tail—on the engine nacelles. Its white fuselage bore stripes of blue and red, sweeping back to a night-blue tail, emblazoned with stars. It was his brand-new Citation M2, for which he had waited two years. The form of the delivery pilot, a man named Pat Frank, could be seen in the pilot’s seat, having flown the twenty-minute flight from the factory, in Independence, Kansas.

A lineman ran forward and chocked the nosewheel, and the pilot cut the engines, their dying whine leaving the howl of the wind as the only noise on the ramp.

Stone had spent the past sixteen days in the classroom and the simulator; the content of his life had shrunk to sweating out instruction all day, then ordering room service at night and falling asleep in front of the TV. He wanted the real airplane and he wanted New York. Now.

The door of the airplane swung open and a figure kicked the folding steps down, and Stone got his first surprise of the day. The ferry pilot descended onto the tarmac, and her blond hair streamed with the wind. “Hi,” she said, holding out a hand. “I’m Pat Frank. Can we get out of this wind?”

“Follow me,” Stone said, running for the airplane and climbing the steps. He glanced into the cockpit, which was completely familiar to him, since the three fourteen-inch screens of the Garmin 3000 avionics and the accompanying switches and throttles were identical to those in the simulator. He sank into one of the four comfortable passenger seats and waved Ms. Pat Frank to a seat facing him. “So you’re the hand-holder my insurance company sent to make my first flight with me,” he said.

“I am that,” she replied. “At the very least. You may recall that you paid me to do the acceptance flights and inspections for you, too.”

“And I thought I was signing checks to some grizzled veteran of the airlines, corporate flying, and, maybe, FedEx.”

“I’m all that, except the grizzled part,” she said, smiling, revealing perfect teeth set off by her red lipstick. The soft, goatskin leather jacket, zipped up against the weather, could not conceal her ample breasts. “All we need is fuel and a flight plan filed.”

“I hope to God you don’t want to do the walk-around inspection in this wind,” she said. “I’ve already done it this morning in a nice warm hangar, and if you want to get me off this airplane you’re going to have to drag me.”

A lineman stuck his head into the cabin. “Fuel’s on the way,” he said. “You want me to stow your bags, Mr. Barrington?”

Pat Frank handed him a key. “Up front, please, and kindly remove the ten bags of lead shot first.”

“Weight and balance,” she said. “My hundred and twenty pounds weren’t enough to get us into the envelope. With you aboard, no problem, unless you have plans to have some slip of a girl fly the airplane alone.”

“Can’t think of one,” Stone replied.

“Well, if you’ve already been to the can, let’s button this thing up, then climb into the cockpit and see if we can make it fly.”

“After you,” Stone said, stripping off his trench coat.

She pulled up the steps, closed the door, and swung the lever that locked it. In a moment, she was in the copilot’s seat.

Stone went forward and, with some difficulty, managed to get his six-foot-two frame into the pilot’s seat.

Pat helped him with adjusting the seat. “It’s snug, but you’ll get used to it,” she said. “For some reason, Cessna puts all the room in the rear, where the passengers sit—not where the owner-pilots for whom this airplane was intended fly the thing.”

She read out the pre-start checklist, he flipped the appropriate switches, then he turned on the power and the three glass panels slowly came to life, along with the two smaller screens just ahead of the throttles, called the GTUs. These were the iPad-like units with which most of the airplane’s systems were operated. Stone had spent a week playing with a computer-simulated version, memorizing the patterns and trying to forget the old G-1000 in his former airplane.

“Did you have a Mustang before?”

“He’s twelve, or so, and he’s already type-rated.”

She shook her head. “I never heard of a father giving his son a jet airplane.” She watched as he managed to tap a flight plan into the GTU, then run the system checks. “Not bad for a first flight,” she said.

“They drilled me well in class. Don’t worry, I’ll need your help before long.”

Outside, the fuel truck drove away, and the lineman signaled that the chocks had been pulled. Stone pulled the hand brake and started the engines. When all systems were running smoothly, he listened to ATIS, the tower’s recorded weather report, then called clearance delivery, adjusting the microphone attached to his Bose headset. “Wichita clearance delivery, November One Two Three Tango Foxtrot is IFR to Tango Echo Bravo. Do you have a clearance for me?”

They did, and Stone copied it down and read it back. It included a departure procedure, and he inserted that into his electronic flight plan, then called for permission to taxi. “Thank God that wind is right down the runway,” he said. “I don’t feel like fighting it.” He taxied to the end of the runway, and Pat read out the pre-takeoff checklist. With every switch in its proper position, he asked permission to take off and was cleared. He rolled onto the runway, lined up with the centerline, centered the heading bug, flipped on the pitot heat switches, and pushed the throttles to the firewall.

Stone put both hands on the yoke and pulled back until two V-bars on the display in front of him mated, showing that he had achieved the proper climb angle.

He pressed the button that turned on the autopilot, then removed his hands from the yoke. They were given an initial climb to ten thousand feet, and he was told to switch to Wichita departure. The frequency was already entered into the G-3000; all he had to do was tap the glass panel at the proper spot. “Wichita departure, N123TF with you out of three thousand for one zero thousand.”

Stone repeated the instruction and pressed the NAV button to tell the autopilot to follow the flight plan, then he dialed forty-one thousand feet into the computer, pressed the Flight Level Control button, and sat back.

He put behind him the claustrophobic previous two weeks and room-service food, and reveled in his new airplane as it climbed quickly to FL 410.

“Does your wife fly?” Pat asked.

“Thank you. Why don’t you delay your return to Wichita, and let’s have dinner tonight?”

“I’m moving into a new apartment tomorrow in New York,” she said, “and I’d love to.”

Luciano's Luck by Jack Higgins
Macaque Attack by Gareth L. Powell
What Are You Hungry For? by Deepak Chopra
Alex & Clayton by John Simpson
Say Yes to the Duke by Kieran Kramer
The Demetrios Bridal Bargain by Kim Lawrence
Cat & Mouse Games (Tempting Mr. Parker) by Blue, Gia
It Happened on the Way to War by Rye Barcott
Wicked at Heart by Harmon, Danelle
Pride's Harvest by Jon Cleary
Our partner