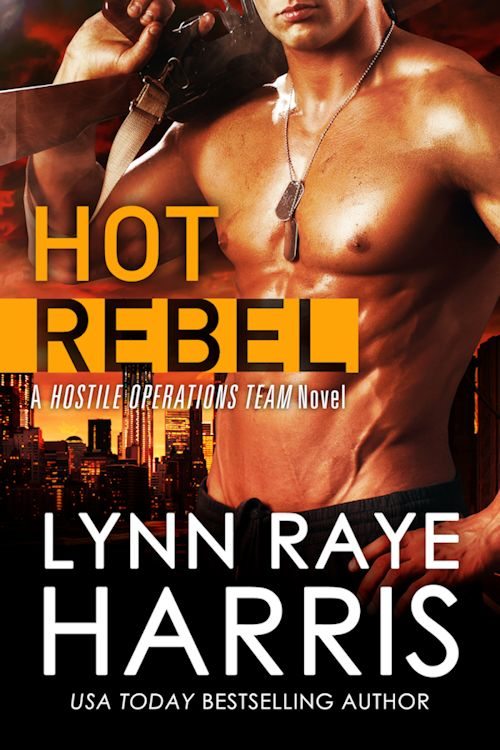 A rebel on the run…

Victoria Royal is a traitor. Or so the U.S. government believes. Victoria was once a promising sniper in the Army, but now she’s gone rogue—worse, she’s just landed in the middle of a Hostile Operations Team mission in the desert and blasted it all to hell.

Nick “Brandy” Brandon doesn’t expect to run into Victoria when he’s bugging out from a mission gone wrong. It’s been more than three years since she disappeared from the sniper course they were in together, and he’s finally stopped thinking about her killer curves and smart mouth.

But now she’s back—and she’s far more dangerous than Nick ever believed possible… Is she really a traitor? Or is there something more at stake? He has to decide fast—because time’s running out and too many lives hang in the balance…

“Nothing happening.” Nick Brandon squeezed one eye shut and sighted down the scope of his sniper rifle. “No sign of the target.”

“Jesus H. Christ,” came the frustrated reply over the comm. “Where the fuck is this bastard?”

A bead of sweat trickled down Nick’s neck. He ignored it since it was only one of many that had soaked the cotton of his T-shirt and made him damp beneath the desert ghillie suit. Discomfort was part of the job. Ignoring it was a necessary survival skill.

Hell, yeah, he wished he knew. He’d been in position for days now, in a bombed-out building in one of Qu’rim’s distant towns. The fighting still raged in this war-torn land, in spite of the fact they’d neutralized Al Ahmad months ago. It had eased up for a while, buoyed on the reforming spirit of the new king and his promises to the people, and then it fell apart again as other factions took advantage of the Freedom Force’s confused and fractured leadership to fill the void and continue the civil war.

Perhaps it wouldn’t matter so much to the rest of the world if there weren’t a giant fucking uranium mine in the middle of the conflict. At least it was heavily guarded by an international peacekeeping force, but that was small comfort when it was still technically in a war zone.

Now that the Freedom Force was regaining strength, the whole fucking thing was a fresh nightmare. But this mission, if it went well, would help to stifle their regrowth, at least for a little while.

Nick sighed as he put down the sat phone and rotated his neck to pop out the kinks. His spotter looked up from the floor where he’d taken a few minutes to catch some sleep. It was odd to think of doing this job without Jack Hunter, but Jack was on assignment elsewhere these days. Being married to a pop star changed a guy’s life, apparently.

Though if Jack were still here, Nick would be the spotter instead of the sniper. He liked being the sniper.

Dexter “Double Dee” Davidson rubbed his hand over his head. “Man, what a dream.”

“Did it involve naked girls and swimming pools?”

Dex grinned. “Not quite, but that would’ve been a good one too.”

Nick scanned the area once more. A donkey meandered down the street on one end while a woman in full burka shuffled along on the other. He focused on the woman, watching her sharply for a minute before deciding she was exactly what she appeared to be. Her face was hidden behind the burka, but she didn’t move like a man. She had a basket slung over her shoulder that seemed to contain a few meager dates and some rice so far as he could see. She was clearly hurrying to get out of the street before anyone noticed her.

This town was about half-inhabited anymore, but the ones holding on were determined to stay and make as normal a life as possible in the midst of a war. It would be far more convenient if no one were here at all, but war wasn’t about convenience.

Nick watched the woman until she disappeared down the street, and then he sank down against the wall and pulled water out of his pack. He took a sip and then capped it and put it back.

“Why don’t you take a nap? I’ll watch for our tangos for a while.”

Dex lifted his scope and crawled into position in the opening in the wall. Nick had just closed his eyes, looking forward to twenty minutes or so of uninterrupted shut-eye, when something rumbled deep in his chest.

He opened his eyes again, certain he was imagining things. But Dex was peering intently at something.

“Trucks,” he muttered. “Mile away, coming toward us.”

Nick scrambled back up. “Could be our guy,” he said, sighting down his own scope. It was the first interesting thing to happen in days now, and his adrenaline spiked as he imagined completing this mission and bugging the fuck out.

They waited, watching the trucks that bristled with armed men—and then the column turned and drove north. Far in the distance, Nick could see a dust cloud making its way south. More trucks, no doubt.

His heart thumped with excitement. “I think this is our meeting. But they aren’t coming to the town.”

Dex was busy with calculations. “Almost twenty-eight hundred yards when they converge. Damn,” he breathed.

The two columns moved closer together.

The two columns converged after what seemed like hours but in reality was only minutes. Sand swirled, obscuring the men for a long moment before finally settling. Men got out of the vehicles and ranged into the open. Nick searched for the target. The man was a new lieutenant in the Freedom Force and rumored to be pulling the strings in this quadrant of Qu’rim. Not to mention, he’d been rebuilding the shattered network of terrorists and giving them a cause to unite behind.

“Found him,” Nick said, satisfaction rolling through him with the sharp sweetness of an orgasm. Not quite the same sensation, but damn close. The second-best feeling in the world, he decided.

Dex double-checked the deck of cards they carried that had the names and faces of the men they were hunting. This one was young—and American-educated, which left a bad taste in Nick’s mouth.

Nick’s finger hovered over the trigger. He had to sight this one carefully, had to take the shot when he was fully ready. The man had no idea he was being targeted, so there was no need to rush. When the wind was right, Nick would squeeze the trigger. The shot would fall long and fast before it finally arced into the head of the target. It was critical he get this right.

Once it happened, they had to break down and get the hell out fast. Nick let out his breath, ready to squeeze on the exhale. Another split second and this bastard was going down—

The man beside the target dropped just as Nick’s finger tensed. He jerked, but it wasn’t his bullet that had hit the other man. He hadn’t even fired—but someone had. He sighted the target again, but the men in the group had realized something was happening. They went berserk, shouting and running and throwing the terrorist leader into an armored vehicle before Nick could get a clear shot.

Dex echoed him at the same moment the report of a rifle rang back to them over the distance. Of course someone else had taken a shot. They both knew it before they heard it.

The mission was a bust. Nick scanned the area around their hideout, looking for signs of another team. Who else could have come after these bastards if not another government with competing interests?

But if there was another team, they were damn good, because he and Dex had been in position for days and they’d never gotten wind of anyone else in the area other than a few locals.

Damn, that had been a beauty of a shot. It was almost impossible, in fact—and yet another sniper had made it in the split second before Nick could make his. He could admire the skill even if the bastard had fucked up the mission.

Half the column of men had slammed back into their trucks and sped away. But another group, a small group, was heading toward the town with assault rifles and antiaircraft missiles.

“Copy,” Dex said into the sat phone before ending the call he’d just made to their team. His eyes were filled with determination when he looked up at Nick. “Extraction point moved due to enemy fire. We gotta bust our asses if we’re gonna make it.”

They broke down the equipment double-quick, stowing the weapons and shouldering the gear. They had a head start, but not a long one. They’d have to move from this building and keep moving while the enemy combatants searched for them. And they needed air support if they were going to make it out.

Nick’s comm link crackled for the first time since this mission had gone to hell. “Need that firebird, Flash,” he grated before Ryan Gordon could speak. Jesus, this mission had been plagued with bad luck from the start. In the past few hours, a dust storm had interfered with their primary comm and sent them to backup. And now this.

“Called it in. HQ says it’s coming. What the fuck happened?”

Flash and the team were a couple of miles away, waiting for Nick and Dex.

“We got company, that’s what. They took out the opposition commander. Our guy got away.”

“Yeah. No sign of our shooter or his team.”

“Don’t worry about them, Brandy.” It was Kev “Big Mac” MacDonald. “Get the fuck out and we’ll let HQ sort it out.”

Like Nick would do anything differently. But, yeah, if he got a glimpse of this asshole, he’d take the chance.

“Birdie’s ETA is fifteen minutes. You guys all right?”

“Yeah,” Nick said as he and Dex busted out the back door of the building they’d been haunting like ghosts and made for the next zone they’d set up.

The sun was setting, and long shadows lay across the desert landscape. The heat of the day still shimmered on the horizon, and the sounds in the town were subdued. A goat bleated somewhere. Nick’s head jerked up as something moved to his left. But there was nothing and he kept running.

Dex made it first and burst into the building they’d scouted days ago. There was always the chance someone had taken shelter in the past few days, but the building was abandoned and the chances were slim.

Dex headed for the long bank of windows at the rear and hunkered down inside the wall. Nick could hear shouting coming from outside now. It was still a few streets over but moving closer.

The door they’d come through just a few seconds ago shot open, and both men raised their weapons automatically.

A woman in a burka stood there, silhouetted against the setting sun. Nick wondered if it was the same woman he’d seen earlier, but then he realized this one didn’t have a basket like the last one had.

“Fuck me,” Dex breathed softly at the sight of a rifle cradled in her arms.

The woman ripped away the face covering and tipped her chin up, and Nick shook his head as if to clear a mirage.

“Not just now, boys,” she said in perfect English. Or as perfect as a Southern accent could come to it, anyhow. “We’ve got a company of tangos on our heels, or hadn’t you noticed?”

Victoria wished it weren’t two against one, but she’d lost her spotter three days ago when the dumb bastard had tried to suggest she was only good for one thing—and that thing hadn’t been shooting.