Read How Sweet It Is Online

How Sweet It Is 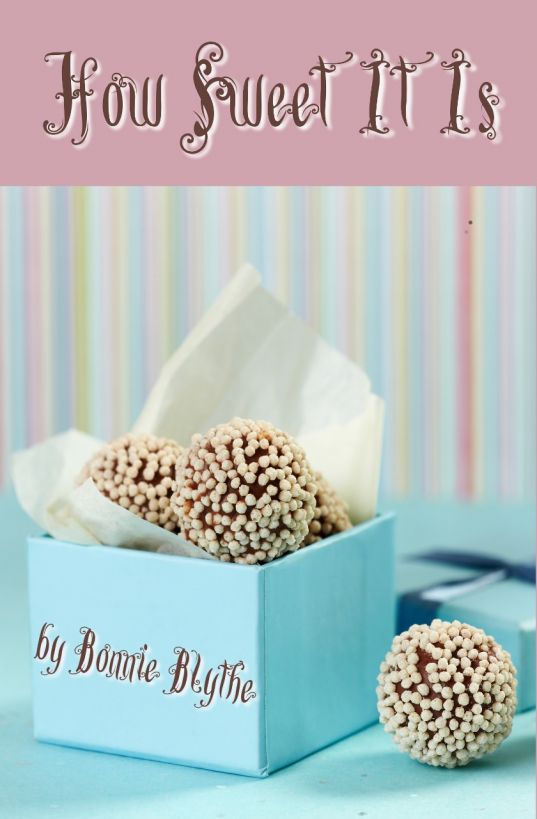 Embrasser means kiss in
French. Delphine D'Arleux, traveling in Belgium for a candy-making
class, doesn't expect to have the word demonstrated to her,
especially by a stranger. Brad Larsen, an avowed chocoholic, knows
he behaved badly by kissing the pretty French girl, but he can't
quite regret his actions. Can he show Delphine that a longing
fulfilled is sweet to the soul?

HOW SWEET IT IS

A longing fulfilled is

sweet to the
soul
.

It just doesn’t get any better than
this!

Brad Larsen leaned his head against the front
window of a Belgian chocolatier shop in the old Brussels square and
inhaled deeply, attempting to smell the chocolate through the glass
while gazing at the rows of wrapped chocolates that winked in the
slanting rays of the sun like jewels in Aladdin’s cave.

He wanted to go inside, but the shop was
currently crowded with eager weekend customers. Brad decided to
wait a few more minutes and bide his time ogling the candy.

He smiled wryly at the thought. His old
surfing buddies back home had ribbed him about his opportunities to
ogle pretty European girls. Although he’d done a fair amount of
that while he’d been visiting the continent during the last week
with his parents, one had to have one’s priorities straight.

Brad pressed his hands against the glass,
willing some of the customers to leave the store. His gaze traveled
around the dim interior. Old brick and bad lighting didn’t hinder
the candies from appearing to glow with an inner radiance. He
closed his eyes and sighed.

When he opened them, he saw a female standing
close to the window, staring at him. Her quizzical expression was
almost comical. She had enormous ebony eyes fringed by thick
lashes, set in a heart-shaped face.

Brad’s gaze widened at the vision she
created—made even more delectable framed by shelves and shelves of
chocolates. Although he was vaguely aware of the condensation left
on the glass from his breath, he couldn’t peel himself away from
the window.

I have to meet
her
.

The girl inside the shop
suddenly twisted away, melting into the mob of shoppers. He craned
his neck, scanning the crowd to find her, but it seemed she’d
disappeared. He pressed a hand to his heart. That tyrant,
Madame Chocolat
, with all
her velvety sweet, cavity-inducing wiles, had been eclipsed by the
pretty stranger. He made his way into the store.

Brad edged his way around the people teeming
in the small shop. With the advantage of his height, he spotted the
girl he had seen where she stood across the room in line near the
counter. A dark pink blush on her cheeks made her appear flustered.
Brad stood transfixed, ignoring the jostling of customers around
him.

When she was first in line,
she stepped up and pointed to the boxed selections displayed behind
the counter. Brad listened as she gave her order in rapid French.
He grinned.
Ooh la la
…

She paid for her purchases with colorful Euro
currency, then lifting her bags high, attempted to turn around in
the crush of people. After being bumped by a mother with rowdy
children, she darted through a break in the throng toward the
door.

Not so fast,
mam’selle
. Brad stepped neatly to the left
to intercept her, pulling his English-French phrase book from his
back pocket. She ran right into his chest.

Brad smiled at her, delighted she was now
within reach.

She gasped—apparently recognizing him from
the window—and tried to back up. Brad stared at her. She was even
prettier up close. Her irises looked like liquid black ink, her
brown hair appeared silken in the low lights. When she saw she was
blocked, she frowned at him.

Brad cleared his throat, his mind casting
about for something to say. “Um—”

The girl bit her lip in obvious frustration,
her dark gaze darting as if seeking a way of escape. Brad pawed
through the phrase book, feeling a thin sheen of sweat on his brow
as he squinted at the type.

He peered over the top of his book. The
French girl gave him an outraged glare before shoving her way
around him.

Huh? Did I say ‘good day’
incorrectly?
He scowled at the book as if
it was guilty of the offense.

Before he could figure out his mistake, the
young woman had slipped through a gap in a group of Japanese
tourists and hurried out the door. Brad shoved the book into his
back pocket and plunged after her, ignoring the stifled
exclamations from annoyed customers.

He stumbled onto the
cobble-stoned street and saw the woman stride toward shadows cast
by ancient buildings looming along the square. Brad took a moment
to admire the way her hair gleamed in the sunlight. She wore a gray
jacket with a matching skirt, and black high heels.
Very prim and proper
. When
he’d stood next to her in the store, he’d noticed a wisp of frilly
white blouse peeking from beneath the jacket, which hinted at a
romantic side. He jogged after her.

The woman increased her pace, threading her
way through wandering shoppers. He neared close enough to almost
reach out and touch her. She suddenly dropped one of the smaller
bags she carried, and spun around to retrieve it.

Brad saw his chance. He jumped forward and
grabbed the bag. He held it out to her with a flourish, trying to
catch his breath.

The woman snatched it from him. “Village
maiden, indeed!”

I will not smile. This is
not funny
.

Delphine D’Arleux glared at the look of shock
on the young man’s face. “I’m bilingual,” she said coolly.

He had bleached blond,
shaggy hair, a lightly tanned face, and merry blue eyes under dark
blond eyebrows. She looked away.
Just
because he’s cute doesn’t mean he’s not a thief or
murderer
.

Delphine glanced back to him and arched her
brow, experiencing a stab of irritation when she remembered his
actions. “Do you always stare at women through windows? Besides, do
I look like a village maiden?”

The man flushed and offered her a lopsided
smile. “I meant no harm, really. Your beauty took my breath
away.”

Delphine turned and walked
away.
I don’t have time for
this
. The bags in her hands suddenly felt
like they weighed a ton. She wanting nothing more than to go back
to her hotel room and sleep until her flight later that
evening.

She glanced back over her shoulder. He ran up
and came to a stop in front of her.

“At least let me buy you a cup of tea,
chocolate or whatever you want…by way of apology.”

Delphine stood rigidly and
regarded him, wondering why he upset her hard-won equilibrium. Then
she surveyed her surroundings. The old square sparkled in the
bright, warm sunlight and bustled with natives and sightseers.
Striped awnings of the nearby cafés undulated in the light breeze.
Soaring Gothic stone structures hedged in the square, their severe
lines softened by window boxes frothing over with riotous blooms.
She eased out a breath.
Here I am in the
middle of Grand Place, Brussels, a place of adventure and
romance—and I’ve had neither
.
Maybe that’s why I’m upset. Not only that, I’m
broke—again
.

She'd spent the last of her
money at the chocolate shop for research purposes and wouldn’t be
able to eat dinner before the flight. Her stomach gave an
unladylike rumble. Delphine felt her face heat. She looked at the
young man and sized him up.
Why not? Why
not let this guy feed me?
Then I can say
I’ve had at least one adventure, although minuscule, while in
Europe. Even if it serves the dual purpose of getting something to
eat
. She forced her lips up in an attempt
at a smile. “
Merci
.”

The man grinned and held out his hand. “My
name is Brad Larsen.”

She adjusted her bags, reached out, and gave
him a limp shake. “Um, Delphine.”

Brad continued to hold her hand. “Delphine,”
he said with his eyes closed. He slowly repeated her name as if
savoring the sound.

She tugged her hand away,
regretting her impulse to accept his invitation.
Cute…but weird
.

He offered her a charming smile. “Such a
beautiful name.” Brad swept his arm in the direction of a nearby
outdoor café.

Eyeing him—half-wary, half-intrigued—Delphine
followed him to the clusters of tables and chairs. When they were
seated at a small marble-topped table, he yanked a phrase book from
his back pocket. After scanning a page, he cocked his head at a
waiter and rapped his hand on the table. “Monsoor! Doo chocolah!
Toot sweet!”

She hid a smile behind her hand. His French
was appalling. While the stiff-faced waiter took their order, she
studied Brad from beneath her lashes. Delphine realized he appeared
somewhat older than she’d first thought. She could see faint lines
at the corners of his eyes and his face had a more sculpted look up
close. His hands holding the phrase book were strong and
tanned.

Perhaps his air of insouciance made him seem
younger—not to mention his apparel. His faded Levi’s topped by a
loud Hawaiian shirt seemed out of place in the midst of dark-clad
natives or the tourists in coordinated sweat suits. He lounged in
his wrought iron chair, apparently at ease with the world. His
heavy-lidded gaze regarded her with obvious amusement.

Delphine realized she’d been caught staring
and lowered her eyes. Usually she remained imperturbable against
the wiles of over-familiar men. Perhaps the old romantic air of the
city had infected her common sense.

Her heart gave a
lurch.
What would it be like to be
frivolous, unfettered by cares? Maybe even flirt with a handsome
man?

Delphine pressed her hands together in her
lap, alarmed at the direction of her thoughts. Now wasn’t the time
to become careless. She mustn’t forget this was a business trip—not
an excuse to entertain silly thoughts about a beguiling young man
she’d never see again. She suppressed a sigh. Being twenty-four
suddenly felt like eighty.

When she looked up, she saw Brad watching
her. Delphine felt a fresh tide of heat creep up her neck. She took
a deep breath, telling herself to relax.

The waiter appeared, placing two cups of hot
chocolate and a plate of croissants in front of them. Brad thanked
him in strangulated French and picked up a cup.

“Since I first saw you in a candy store, I
trust you like chocolate,” he said, winking.

Delphine smiled and took a sip. “Thank you,
it’s very good.” She frowned, staring into her cup.

“Non, I mean, nothing is wrong.” She set her
cup down. “I’m trying to decide if this is made from the Bourbon or
Bahia bean.”

“The type of cacao bean used to make the
chocolate.”

Delphine raised her brows and decided to
tease him a little. “Powdered chocolate mixes cannot stand up to
the real thing.”

He grinned. “The real thing being…?”

“Well, considering the Aztecs developed it
and drank it as a beverage, I’d recommend using solid Mexican
chocolate with at least a seventy percent cocoa content.”

The Measures Between Us by Ethan Hauser
Every Which Way (Sloan Brothers) by Read, Calia
Strathmere's Bride by Jacqueline Navin
The Dalwich Desecration by Gregory Harris
The Billionaire's Step - Complete Series (Forbidden Billionaire Stepbrother Romance) by Adams, Michaela
Cracking the Dating Code by Kelly Hunter
Theft by BK Loren
The Loser by Thomas Bernhard
Crumbs by Miha Mazzini
Knight of Seduction by Cheryl Holt
Our partner