Read How the Scots Invented the Modern World Online

How the Scots Invented the Modern World 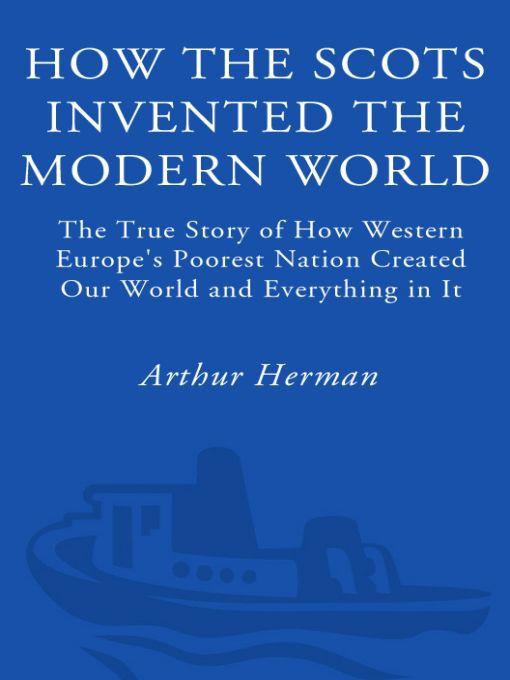 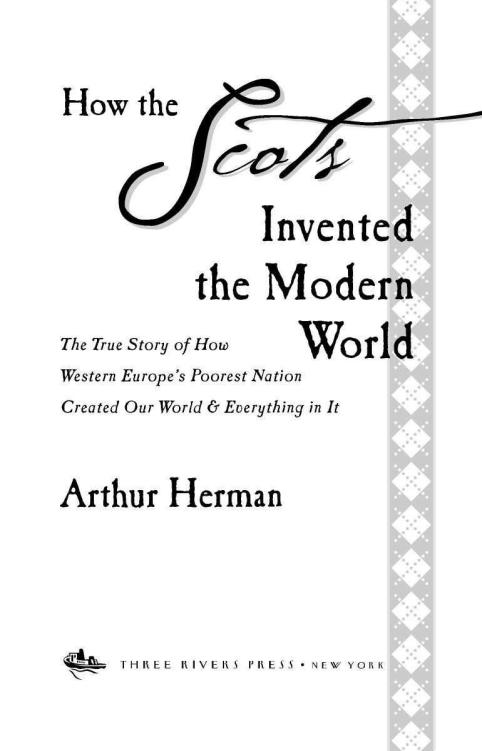 People of Scottish descent are usually proud about their history and achievements. Yet even they know only the half of it.

They can recite many names and details in the familiar story of their people. “Braveheart” William Wallace and Robert the Bruce; the Arbroath Declaration and Mary Queen of Scots; Robert Burns and Bonnie Prince Charlie. They point out how James Watt invented the steam engine, John Boyd Dunlop the bicycle tire, and Alexander Fleming penicillin. Yet no one else seems to pay much attention. Scots often complain that Scotland’s place among nations deserves more exposure than it gets. But their complaints have an ironic, rather than a beseeching, tone. They seem to take a perverse pride in being so consistently underestimated.

The point of this book is that being Scottish is more than just a matter of nationality or place of origin or clan or even culture. It is also a state of mind, a way of viewing the world and our place in it. This Scottish mentality was a deliberate creation, athough it was conceived by many minds and carried out by many hands. It is a self-consciously modern view, so deeply rooted in the assumptions and institutions that govern our lives today that we often miss its significance, not to mention its origin. From this point of view, a large part of the world turns out to be “Scottish” without realizing it. It is time to let them in on the secret.

This is the story of how the Scots created the basic ideals of modernity. It will show how those ideals transformed their own culture and society in the eighteenth century, and how Scots carried them with them wherever they went. Obviously, the Scots did not do everything by themselves; other nations—Germans, French, English, Italians, Russians, many others—supplied bricks and mortar for building the modern world. But it is the Scots who drew up the blueprints and taught us how to judge the final product. When we gaze out on a contemporary world shaped by technology, capitalism, and modern democracy, and struggle to find our own place in it, we are in effect viewing the world through the same lens as the Scots did.

Such an understanding did not come easily. Sir Walter Scott said, “I am a Scotsman; therefore I had to fight my way into the world.” The history of Scotland in the eighteenth and nineteenth centuries is one of hard-earned triumph and heartrending tragedy, spilled blood and ruined lives as well as great achievements. In 1700 Scotland was Europe’s poorest independent country (Ireland, after all, was governed by Englishmen, and Portugal still owned Brazil). Yet the story of how this small, underpopulated (fewer than two million people as late as 1800), and culturally backward nation rose to become the driving wheel of modern progress is not only largely unknown, it may even be inspiring.

For if you want a monument to the Scots, look around you.

The Tron Church stands on Edinburgh’s High Street, almost at the midpoint of the Royal Mile, which rises to Edinburgh Castle at one end and slopes down to Holyrood Palace at the other. In 1696 the Tron Church was in many ways a monument to the strength and success of Scottish Presbyterianism, or as the Scots themselves call it, the Kirk. In 1633 the Edinburgh Town Council had decided they needed a new place of worship near the “tron,” or public scales, where merchants and officials established the true weight and measure of commodities sold in the city markets. It would be designed as a specifically Presbyterian church. Unlike the larger St. Giles Cathedral, or the former monastery site of Greyfriars Church off Candlemakers Row, it carried no taint of association with Scotland’s Roman Catholic past. Nor would it be under the sway of the new Bishop of Edinburgh, appointed by King Charles I to thrust a foreign Anglican creed down the people’s throats.

Construction got under way in 1637. Then, the next winter, High Street was filled with the sound of drums and psalm-singing crowds, as citizens flocked to sign a National Covenant to take up arms against King Charles. The Covenanters took over the city in defiance of their English oppressors. The Tron Church sat unfinished while the Scots routed Charles’s army in the Bishops’ War. It withstood the siege of Edinburgh by Oliver Cromwell’s troops in 1652. It was still unfinished when Charles I’s son, Charles II, sailed across the English Channel to be restored to his throne in 1660. Not until 1678 did builders finally complete its unpretentious steeple, “an old Dutch thing composed of wood and iron and lead edged all the way up with bits of ornament,” and set Edinburgh’s coat of arms above the doorway, with this inscription in Latin:

THE CITIZENS OF EDINBURGH DEDICATE
THIS BUILDING TO CHRIST AND HIS CHURCH.

Edinburgh’s tron served the community in another way, as the town pillory, where the courts sentenced transgressors to be bound and punished. “Much falset and cheiting was daillie deteckit at this time by the Lords of Session,” wrote one diarist in 1679. He continued with relish, “there was daillie nailing of lugs and binding of people to the Tron, and boring of tongues; so that it was a fatal year for false notaries and witnesses, as daillie experience did witness.”

Sixteen hundred ninety-six would be a fatal year for another kind of transgressor. August had been a cold month, in fact it had been raining and freezing all summer. As the Tron Church struck eight o’clock, four young men were hurrying past, huddled against the cold. One was John Neilson, law clerk in the Court of Session, aged nineteen; the next Patrick Midletoyne or Middleton, aged twenty, a student at the College of Edinburgh. With them were Thomas Aikenhead, almost nineteen, a theology student, and John Potter, also a university student at the tender age of thirteen. We do not know for certain, but they may have been coming from Cleriheugh’s Tavern, a favorite neighborhood haunt for students, law clerks, and members of the legal profession.

As they passed the church, Aikenhead shivered from the cold wind blustering around them. He turned and remarked to the others, “I wish right now I were in the place Ezra called hell, to warm myself there.” Again, it is not known whether any of the other lads laughed at his little joke. But the next day one of them, or another of their circle, informed the kirk authorities of what Aikenhead had said.

Aikenhead’s joke turned out to be no laughing matter. Other students revealed that, in between theology classes, Thomas Aikenhead had been systematically ridiculing the Christian faith. He had told astonished listeners that the Bible was not in fact the literal Word of God but the invention of the prophet Ezra—“Ezra’s romances,” as he called it. He asserted that Jesus had performed no actual miracles, that the raising of Lazarus and curing the blind had all been cheap magic tricks to hoodwink the Apostles, whom he called “a company of silly witless fishermen.” He said the story of Christ’s Resurrection was a myth, as was the doctrine of Redemption. As for the Old Testament, Aikenhead had said that if Moses had actually existed at all, he had been a better politician and better magician than Jesus (all those plagues of frogs and burning staffs and bushes and so forth), while the founder of Islam, Mohammed, had been better than either.

All this would have been horrifying and insulting for a believing Presbyterian to listen to, but Aikenhead had expounded larger issues as well. He claimed that God, nature, and the world were one, and had existed since eternity. Aikenhead had opened the door to a kind of pantheism; in other words, the Genesis notion of a divine Creator, who stood outside nature and time, was a myth.

Maybe Aikenhead had been bored. Maybe the theology student was merely showing off his ability to play fast and loose with issues that others treated with reverential care. The stunned silence and dumbfounded looks of his listeners must have been very gratifying to a young man who, at the ripe old age of eighteen, believed he knew it all. But the authorities were not amused. The truly damning evidence against Aikenhead came from his friend Mungo Craig, aged twenty-one, who said that he had heard Aikenhead say that Jesus Christ Himself was an impostor. When the Lord Advocate, the Scottish equivalent of attorney general, heard this, he decided that Aikenhead’s remarks constituted blasphemy as defined by an act of Parliament in 1695, which decreed that a person “not distracted in his wits” who railed or cursed against God or persons of the Trinity was to be punished with death.

Scotland’s legal system operated very differently from the system in England. All power of criminal prosecution rested in the hands of one man, the Lord Advocate. He had full powers to prosecute any case he chose. He could imprison anyone without issuing cause, or decide to drop a case even in the teeth of the evidence, or pursue it even when the local magistrate deemed it not worth the effort. Lord Advocate James Stewart was learned in the law, heir to a landed fortune, and a keen member of the Scottish Presbyterian Church. He also knew that the Kirk was deeply concerned about the wave of new religious thinking coming up from the south, from England, which its enemies called “latitudinarianism.”

All of My Soul by Jenni Wilder
Heaven Looks a Lot Like the Mall by Wendy Mass
Gunns & Roses by Karen Kelly
HeartStorm (HeartFast Series Book 3) by Mooney, Linda
Forty Thieves by Thomas Perry
A Battle Lord’s Heart by A Battle Lord's Heart
Noctuidae by Scott Nicolay
Vampire Academy: The Ultimate Guide by Michelle Rowen, Richelle Mead
Sleeping Beauties by Susanna Moore
Saving All My Lovin' by Donna Hill
Our partner