Read How They Were Found Online

How They Were Found 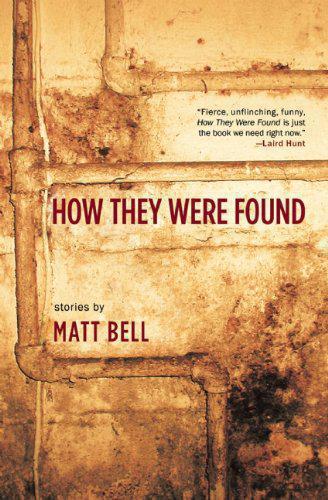 HOW THEY WERE FOUND
by Matt Bell

Keyhole Press is an imprint of Dzanc Books.

How They Were Found © 2010 by Matt Bell. All rights reserved. Printed in the United States of America. No part of this book may be used or reproduced without written permission except in the case of brief quotations embodied in critical articles and reviews.

Portions of this book originally appeared in
Caketrain, Conjunctions, Gulf Coast, Hayden’s Ferry Review, Keyhole, Meridian, No Colony, PANK, Storyglossia, Wigleaf, Willow Springs,
and
You Must Be This Tall to Ride.

“The Collectors” was originally published as a limited-edition chapbook by Caketrain Press.

Hold On To Your Vacuum

An Index of How Our Family Was Killed

And when at last it is over, there is no evidence: no weapon, no blood, and no body. The only clue might be the shadows beneath your eyes or a terribly thin line near the corner of your mouth indicating something has been suffered, that in the privacy of your life you have lost something and the loss is too empty to share.

The cartographer wanders the city streets, crosses the invisible boundaries that lie between neighborhoods. He takes notes, studies the geography of streets and sewers, of subway lines and telephone wires. His bag holds nothing of value beyond the tools of his trade: his pens and papers, his sextant, his rulers and stencils, plus his dozens of compasses, some worth a month's rent and others bought in bulk at dollar stores and pawn shops. The compasses are disappointingly true, pointing north over and over, when all he wants is for one to dissent, to demur, to show him the new direction he cannot find on his own.

Even the compasses that break, that learn some new way, none ever point him to her. At least not yet. It is not their fault, but his. He is making the wrong kind of map, knows he is, but can't stop himself. All the maps he's made since she left have been wrong, but the cartographer does not know the kind of map he needs.

Different maps have different requirements, and trying to make the wrong kind of map in the wrong way is an obvious mistake.

Less obvious is how making the right map in the wrong way will also fail completely, with no indication of how close he is to his goal. There is no partial success to hope for. He will either find his way to her or else he won't.

When she started sleepwalking, neither of them knew where she was trying to go or why she was going there. She was an expert at slipping out without him noticing, at opening the bedroom door and then the apartment door without making a noise. He'd awaken and find her missing, and then it would be a mad scramble down the stairs, down the street, trying to figure out where she went.

Sometimes he found her sitting in the lobby of their building, or on a bench a block or two away. On other nights, he'd search for hours, only to return home and find her asleep in their bed, her nightgown streaked with mud.

During her worst episodes, she would be gone for days, days in which he didn't sleep or eat or work, instead wandering the city with someone else's map in his hand, some official version of the city drawn by a company or a commission, an agreed upon fiction with which he hoped to guess where she might have gone.

Afterward, she could never explain where she'd gone or what she'd been feeling while sleepwalking. After the first months, the cartographer realized he wasn't supposed to ask anymore, that she couldn't or wouldn't answer his questions no matter how insistently he pried.

All she'd ever say was, Let's just enjoy the time we have together, and then she'd cling to his body like the mast of a sinking ship, like she had lashed herself to him.

One time, near the end, the cartographer found her in the Broad Street subway station, sitting beside the train tracks, crying into the red scarf she always wore wrapped around her neck. When he asked why she was crying, she told him she had just missed it, that she'd been so close this time. She said the word
skinny
over and over, but he didn't ask what she meant. He'd stopped asking long ago, when she'd begged him to.

Besides, she herself was skinny now, had lost so much weight in the previous months. How was he supposed to know it meant something else entirely?

He'd looked down the empty tracks, into the open mouth of the subway tunnel. He worried she'd hurt herself, that if he didn't stop her she'd do something terrible. Now she was gone, and it was he who was hurt: by her absence, by not knowing where she went, by not knowing a sure way to follow.

The cartographer compulsively maps everywhere he visits, draws on any surface he can find. At the bar down the street from his house, he draws topological renditions of the layout of the tables, of the path from his stool to the bathroom, of the distribution of waitresses or couples or smoke. There are many kinds of maps, but none of these get him any closer to where he needs to be. He keeps drawing anyway, keeps drinking too, until he feels his head begin to nod. He pays his tab, gets up to leave. If he walks home fast enough, he might be able to fall asleep without dreaming of her.

It is never enough to assume that the reader of the map will approach it with the same mindset the cartographer does. Even omitting something as simple as a north arrow can render a map useless, can cast doubts on all it's trying to communicate. Other markings are just as necessary. There must be a measurement of scale, and there must be a key so that annotations and markings can be deciphered, made useful.

Even though the map is for only himself, it must still be as perfect as possible.

Her sleepwalking: It wasn't the only thing wrong with her, but it wasn't until after she disappeared that he opened his mail to find the first medical bills, sent from hospitals all over the city. She'd been hiding them from him, keeping him safe from how sick she was.

Opening each envelope, he saw the names of procedures she'd undergone, the dollar amounts she owed after the insurance paid its share: Blood tests. X-rays. EEGs, EKGs, acronyms on top of acronyms. Prescriptions for anti-seizure medications, for sleeping pills in increasingly powerful dosages.

He read
electric shock treatments
, the phrase bringing him near tears the first time he read it, wracking him with gasping cries when he began to see it over and over and over.

The cartographer received dozens of these letters in the months after she left, and it was only then that he realized the full scope of her problems.

Sleepwalking, sure, but this too: She was sick, possibly dying, had been almost as long as he'd known her. And she hadn't wanted him to know.

One of their last dates before her disappearance was to see a show at the planetarium near the park. Hand in hand, they watched black holes bend light, obscuring everything nearby in their greed for photons. They watched supernovas, the death of one star, and they watched a recreation of the Big Bang, the birth of many. He remembers how she leaned in close and whispered that in a universe as mysterious as theirs, anything might be possible, and that it was therefore completely reasonable to believe in miracles.

The cartographer smells her when he wakes, smells all her scents at once: vanilla perfume, hazelnut coffee, apple shampoo. Here, she is only a breeze of memory. As soon as he opens his eyes, as soon as he moves his head, she will be gone.

No matter how hard he tries, the cartographer cannot keep to ground truth, cannot render the streets and landmarks in precise relation to each other. No cartographer can. Rendering a three-dimensional world in a two-dimensional space means that purposeful errors are necessary to complete the drawing. Even worse than the change in perspective, there are lines that must be shifted, moved out of the way so that names can be affixed to symbols, so that these identical markings can become specific places instead of generalized symbols. Denoting one (basement apartment E5, where she lived when they met) from another (the third floor walkup 312, her last apartment before they moved in together) requires space on the map, requires the physical world be made to accommodate the twin realms of information and emotion, the layers of symbols and abstractions necessary to represent the inhabitants of these parallel universes.

In even the best maps, all these short distances add up over time, until the city depicted is hundreds of meters wider than it should be. This is the second way he loses her, the way he feels her slipping away. He fights for accuracy by creating new symbols and more complex keys, each designed to end his reliance on language, on descriptions now unnecessary, obsolete. He saves his words, stockpiles them for the day he and his girl will be reunited, when his map will lead him to another skinny, another crack like the one she fell through, where he might follow her to the place she has gone.

After one of her late episodes, the girl laid across their bed and asked, Do you ever imagine there might be a place that would be just ours? That no one else could get to?

The cartographer often imagined such places, but when he told her of his own imagined hideaways—a cabin in the mountains, or a ship floating in the middle of a vast, unknowable ocean—the girl only shook her head.

That's not what I mean, she said. I mean somewhere no one else could ever get to, no matter how hard they tried.

No one, she said, and no thing, either. Where we would be untouchable and safe.

He hadn't known what she meant then, but he did now.

What scares him even worse than not being able to find her is this: What if he finds her, only to discover that this secret place is just for her, that he can't follow where she has gone?

This symbol is any hospital she went to before he met her, while this symbol stands for the hospitals and specialists she went to later, after the sleepwalking began, after the seizures got worse, after she had something to hide.

The cartographer has been to all these places. He has talked to her nurses, her doctors, her fellow patients. He has shaken the hands of these men and women and introduced himself, explained his relationship to her. Although they remember her with fond laughter and sad smiles, none of her caretakers have ever heard of him. This is how thoroughly she had protected him. This is how she kept her illness a mist-shrouded country, barely even imagined from across a vast sea.

This thing killing her the whole time they were together, it might have taken her away, but the cartographer doesn't think so.

He thinks—he believes—that there is somewhere else, some place she has escaped to. Some place where she is safe from this thing that chased her, that invaded her body, that turned her own cells against her.