Read How Tía Lola Ended Up Starting Over Online

How Tía Lola Ended Up Starting Over 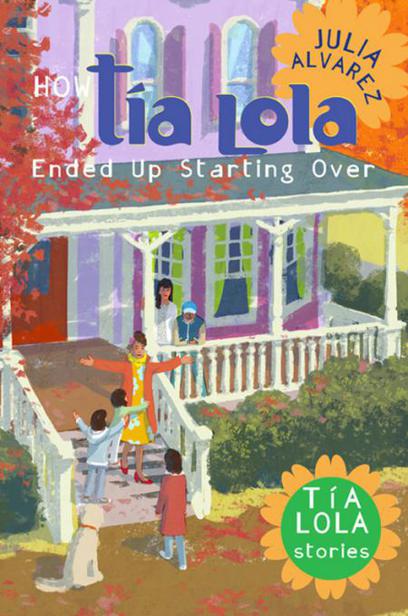 To all the wonderful nieces and nephews
who keep us aunties and
tías
young and sassy!

Chapter One:
How Tía Lola Saved the Swords from Starvation
Chapter Two:
How the Parents Came Around and Around and Around
Chapter Three:
How the Guinea-Pig Weekend Almost Met with Total Disaster
Chapter Four:
How Juanita Ran Away
from
Home
Chapter Five:
How Cari’s Kindergarten Teacher Almost Didn’t Get Married
Chapter Six:
How Victoria Got Her Wish and Wished She Hadn’t
Chapter Seven:
How the Mystery of the B&B Mishaps Became Even More Mysterious
Chapter Eight:
How the Mystery of the B&B Mishaps Was Solved
Chapter Nine:
How Cari Got Her Answer and a BIG New
Familia
Was Formed
Chapter Ten:
How Tía Lola’s Wish Came True
La Ñapa
How Tía Lola Ended Up Starting Over
Acknowledgments

How Tía Lola Saved the Swords from Starvation

Tía Lola and the children are having an emergency meeting in the big attic room in Colonel Charlebois’s house. They are all brainstorming about how the Swords are going to survive now that they have moved to Vermont.

Miguel and Juanita can’t help thinking about their own move here a year and nine months ago. Their parents were separating. Miguel and Juanita were leaving all their friends and their
papi
behind in New York City to come to this strange place. But at least Mami had a job. And they didn’t have to be all alone in the house while she worked long hours. A few weeks after their move, their aunt from the Dominican Republic, Tía Lola, came to visit and decided to stay.

“Don’t worry, Swords,” Juanita says, brandishing a pretend sword, as if she were leading a charge. Swords is a fun
nickname for the Espadas, whose last name means “sword” in Spanish.

“But we haven’t come up with a way to earn some money,” Essie wails. She is the middle Sword, the one who is usually full of ideas
and
, her father likes to add, full of
diablitos
. Whenever Papa wants to say something rude or cussy, he says it in Spanish. Like saying
“diablitos”
makes it okay to call your daughter a little devil! “I mean, Papa hasn’t found a job, and our savings aren’t going to last forever. If something doesn’t happen soon, we’re going to starve.”

“I don’t want to starve,” little Cari sniffles. She is the youngest of the three Espadas and scares easily.

Valentino, the Espadas’ golden Lab, lifts his head and sighs worriedly. If the family is going to starve, he will be the first to feel the rationing.

“Essie, you’re not being helpful,” Victoria scolds. As the eldest, she is always putting out the fires her middle sister starts. It’s like Essie specializes in worst-case scenarios. If she could only find a job as a worst-case scenario consultant, the family would be millionaires.

“We, your
amigos
and
amigas
, will not let you starve!” Tía Lola assures them. She nods toward Miguel and Juanita. “And remember, your friend Rudy will always welcome you at his restaurant.” Rudy owns the wildly popular Amigos Café in town. Tía Lola has helped out so many times on busy nights, Rudy has said that whenever she or her friends want a meal, it’s on the house.

But Victoria knows her father would never accept a free meal. “Papa would think it was charity.”

“So we go by ourselves.” Essie lifts her chin defiantly.

“And let Papa starve?” In Cari’s sweet, young voice, this does not sound okay, even to Essie.

“No one is going to starve,” Tía Lola repeats.
“Se lo prometo!”

“I promise, too.” Juanita raises her right hand. “Me, Tía Lola, and Miguel do solemnly pledge that we will never ever let the Swords starve.” Juanita is hoping to inject some humor into the grim gathering, but nobody laughs. “I’ll bring you food from our house,” she adds, more to the point.

“Especially all her vegetables,” Miguel jokes.

Juanita scowls at her brother. Miguel has been in sixth grade only a week, and he’s already such a know-it-all.

“Okay, people, let’s try really, really hard,” Victoria says, stepping in again to avoid sparks. Now that her father is dating Miguel and Juanita’s mother, Victoria is being kept busy putting out fires in
both
families. “I’m sure that we can figure out a way to earn tons of money.”

Silence greets this hopeful pronouncement. Even Tía Lola is looking frustrated. The beauty mark above her right eye is lost in her wrinkled brow.

“There’s
sooooo
much talent in this room!” Victoria is beginning to sound desperate, even to her own ears. Like a cheerleader for a team that has never won a game and never will.

Essie’s face suddenly brightens. She is remembering the genuine samurai sword Colonel Charlebois gave her this past summer. “I could give sword-fighting lessons.”

“Way to go, Essie!” Victoria says, trying to sound enthusiastic. But she doubts that sword-fighting lessons will be in big demand in a small town in Vermont. Still, it’s important to encourage Essie those rare times when she is being positive. Victoria writes down “sword fighting?” on the SOS list on her clipboard.

“And baseball lessons,” Essie continues, now positively on a roll. An awesome pitcher and a home-run hitter, Essie is always looking for someone to practice with—and a few of Miguel’s teammates have taken her up on it. So maybe she should charge for her time. “You want to help me, Miguel?”

Miguel doesn’t like the idea of charging his friends, but he can’t come up with any other way to help. Given that Víctor, the Swords’ father, might someday marry his mother, it’s too bad that no one in their combined families has a lot of money. His own father, Papi, is an artist whose day job—decorating department store windows down in New York City—is not a big moneymaker. Papi’s fiancée, Carmen, is a lawyer, but like Víctor, who worked in the same firm up till a month ago, Carmen does a lot of free work. So what the right hand earns, the left hand gives away.

The only rich person they all know is Colonel Charlebois, who has been super generous with both families. In fact, neither family would have a roof over its head if it weren’t for him. It was Colonel Charlebois who rented his old farmhouse to Miguel and Juanita and Mami when they first moved to Vermont. Then, when the colonel learned Mami was looking for their very own house to
buy, he very generously turned the rent payments into house payments. The farmhouse on ten acres is on its way to becoming theirs.

Now the colonel has taken in the Espadas, though he claims it has nothing to do with helping them. Even before the Espadas decided to move to Vermont, the colonel had made up his mind to share his big house in town with housemates. He was too lonely living by himself, after spending his whole life surrounded by hundreds and thousands of soldiers in the army.

But so far, the colonel has refused any payment until Víctor has found a job, which he hasn’t. It seems the last thing this small town needs is another lawyer.

This might turn out to be a blessing in disguise. A few nights ago, Víctor admitted to his daughters (and this is a family secret, so it’d be great if it were kept between the covers of this book) that for a long time now, he has not been happy practicing law. Too much arguing. Too many people in trouble.

But what could he do instead?

Papa isn’t sure. Growing up poor, he had to work to help out his family and put himself through school. He used to dream of playing baseball, or at the very least, coaching it. But he has already contacted all the local schools, and everyone is set with their sports staff for the year. “I’ll find something, don’t worry,” he has assured his daughters. “Maybe a job where I can make people happy for a change. And hey, guess what? I’ve already got the best job of all, being your father.” Too bad that being a parent is not a paying job.

Victoria is looking around the room. “Any more ideas?” Five kids, an intelligent dog, a magical
tía
, surely they can come up with one moneymaking scheme!

Juanita has been wondering what she can do that someone might pay her for. Suddenly it occurs to her. “Remember how everyone this last summer loved my flowers and kept saying they wanted me to come over and help out in their garden?” Tía Lola nods energetically, which sort of makes up for the fact that no one else remembers this compliment. “I can sign up people to help them with their flowers!”

She is so excited that even her know-it-all brother doesn’t have the heart to remind her that it is mid-September. Vermont is headed for winter. The Swords
will
starve if they have to wait for grocery money until gardening weather in April.

Victoria wishes she could offer babysitting, but Papa has refused even to discuss the idea until Victoria turns thirteen, which won’t be until next February. And that’s just
discussing
the idea, not
letting
her do it. Meanwhile, Papa is perfectly okay with letting Victoria babysit her sisters without paying her for it.

“I could cook and clean people’s houses and take in sewing and ironing.” Tía Lola is rattling off everything and anything she can think of to do. “And I could give Spanish lessons, cooking lessons, dance lessons—”

“Oh, oh, oh!” Cari is waving her hand. She has just started kindergarten, where raising your hand is such a big rule that now she raises her hand even at home. “I can give
ballet lessons!” She is so proud of herself for thinking of something to keep her family from starving.

“You can’t teach ballet! You’re only five years old.” Essie would have to be the naysayer.

But Cari is already on her toes doing a pirouette to prove she can so teach ballet. Everyone claps. “I can also teach handstands!” She tries one, but overdoes the swing of her legs and flops over on the floor. Who cares? It’s the effort that counts. Everyone claps again.