Read How to Get Famous Online

How to Get Famous 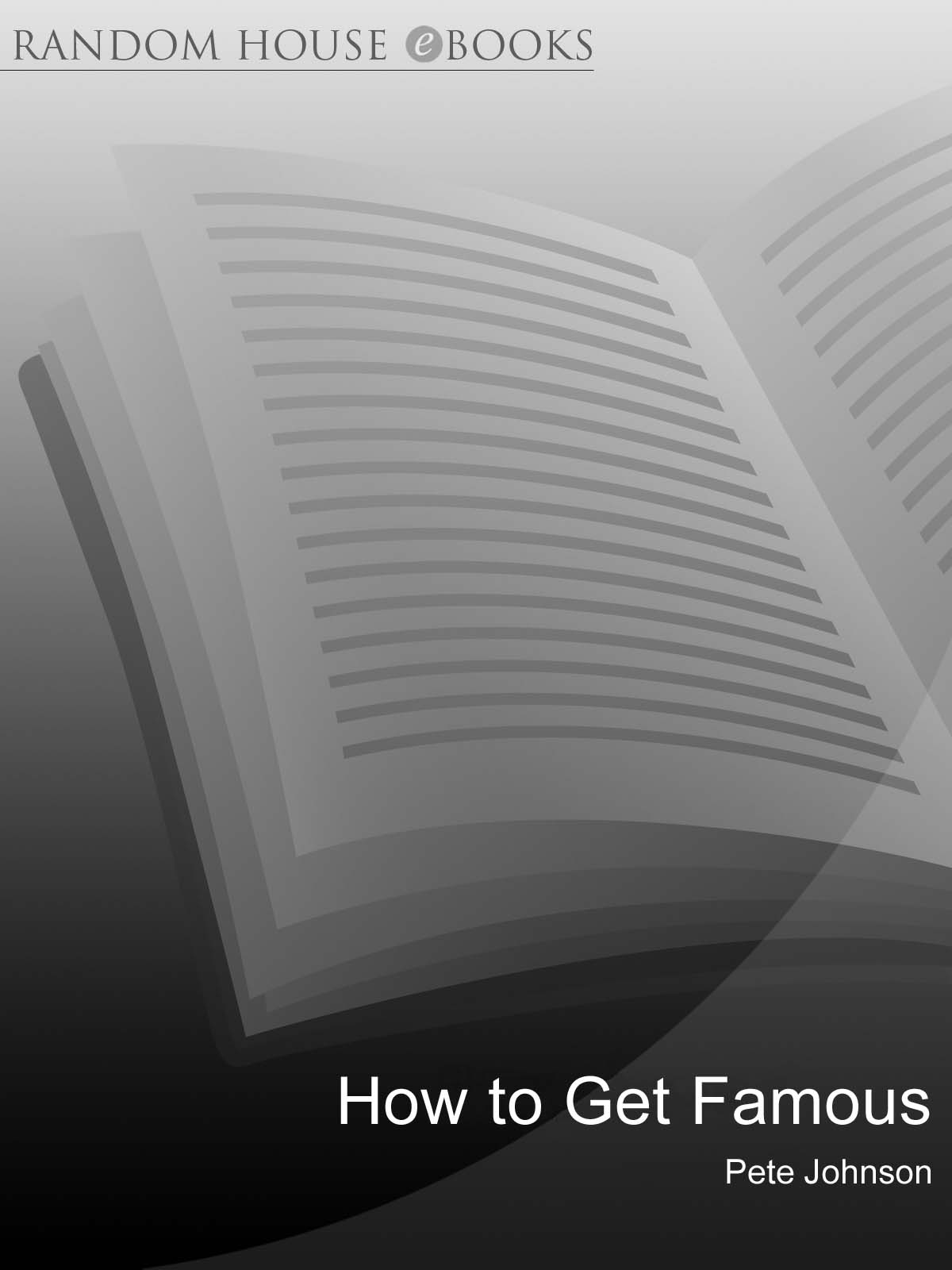 'It's so frustrating,' I cried, 'when we know
we've got all this talent inside us. Georgia, the
world is waiting for us. We've just got to get
famous somehow.'

'Get famous,' repeated Georgia. 'We'll keep saying
that to each other so we go out and find that
lucky break.' Her eyes were gleaming and we
were both elated now by the huge adventure
which lay before us. Then she looked at me and
said solemnly, 'Get famous, Tobey.'

And I repeated equally seriously, 'Get famous,
Georgia.'

How many Pete Johnson books have you read?

TRUST ME, I'M A TROUBLEMAKER
Winner of the 2006 Calderdale Children's Book of the Year
(Upper Primary)

THE FRIGHTENERS
'Prepare to be thoroughly spooked'
Daily Mail

TRAITOR
'Fast-paced and energetic'
The Bookseller

PHANTOM FEAR
Includes:
MY FRIEND'S A WEREWOLF
and
THE PHANTOM THIEF

HOW TO GET
FAMOUS

HOW TO GET FAMOUS
A CORGI YEARLING BOOK

The right of Pete Johnson to be identified as the author of this
work has been asserted in accordance with the
Copyright, Designs and Patents Act 1988.

Addresses for companies within The Random House Group Limited can
be found at:
www.randomhouse.co.uk/offices.htm

A CIP catalogue record for this book is available from the British
Library. 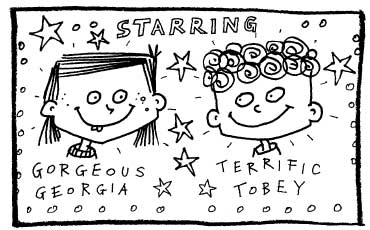 Hope you're feeling really well.
You're about to play a very special tape:
MINE.

I have followed your instructions and
limited myself to two minutes exactly. But
I wasn't sure which of my many talents to
show you. That is why I've jumped from
telling a joke to an impression of an
extremely angry sheep. I can also do cats,
dogs, ducks and elephants – and in a
whole variety of moods too. My tape ends
with a cartwheel.

So just sit back and
enjoy
!
from,
Tobey Tyler
(a name to remember)

Now
Cloud Nine
is this new talent show
for 'young stars of the future' (ages 10-15).
And after watching my tape I was certain
Cloud Nine
would get all excited and say:
'Hey, here's a boy who can do jokes, animal
impressions and cartwheels. We must sign
him up
now
.'

But today, my ever-so-friendly letter and
audition tape has come back in the
stamped addressed envelope provided by
me (but which I never, ever thought they'd
use).

They had also thrown in this unsigned
card. It said: 'Sorry, you haven't been
chosen to appear on
Cloud Nine
this time.
But thank you for your interest, and don't
forget to look out for this great new show,
will you?'

The card was so annoyingly cheerful I
hurled it across my bedroom, just as my
mum popped her head round the door.
'Look at the mess you're making,' she
cried.

I'm sorry, but one card nestling on the
carpet is not a mess. I didn't argue though
(too grief-stricken); instead I informed her
of what had happened. She didn't even
pretend to look shocked, just said, 'Oh, I
expect they had hundreds of tapes sent to
them.' Then she asked me what homework
I had tonight. Cheers, Mum, for being so
understanding.

I wondered suddenly if Georgia – we'd
filmed each other's audition pieces with
her mum's camcorder – had also received
such a gruesome parcel.
Should I ring her?

Actually, Georgia rang me. 'Are you in
receipt of a foul-looking package
containing—?'

'But my mum says not to worry,' she
cried, 'because they haven't possibly got
the time to look at them all . . . they just
pick out a few tapes and ignore the rest.'

'Well your mum certainly knows about
show business. So we haven't actually
been rejected at all,' I went on.

'Oh no, my mum was quite firm about
that – we just haven't had our chance yet.'

How lucky Georgia was to have such a
very wise mum, I thought. Then I said,
'Well, I'm relieved we haven't been
rejected, because I thought my audition
tape was quite marvellous.' Then I added,
'And yours was pretty good too.'

'So my mum says we mustn't get
despondent.'

Cheering words, even if Georgia did
sound pretty despondent while she was
saying them.

Life is very hard when you should be
insanely famous – and you aren't. So I'm
waiting, very patiently, to be discovered.
Georgia is too. She told me she's been acting
in plays and going to acting classes since
she was four . . . that's eight whole years.
You'd have thought someone would have
spotted her bright shining talent by now.

As for me: well, my last acting role was
playing the fourth shepherd in a nativity
play. To improve my very dull part I threw
in an impression of a lamb who was lost
and baaing for help. Personally, I thought
it was the highlight of the whole play, and
it certainly got a huge laugh. But instead
of thanking me afterwards for livening
things up, I got the sack.

Right now, I'm not appreciated – anywhere.
But my life isn't going to stay like
that. I know there's gold in me that's just
waiting to be brought out by a TV camera.
That's my top ambition – to be a TV star.
And it will happen. Have no doubt about
that. That's why I practise my autograph
every single day.

Does that make me seem like a bit of a
SADDO? Well, don't you dare even think
it, because I'm not. I just want to be completely
prepared for the moment when
fame strikes. Here's my latest version.

I bet you like the way I've joined the
two names together. Dead professionallooking,
isn't it?

Guess what: I'm not allowed to watch TV
when I want now. This is my parents'
latest crackpot idea. No, I have to go and
ask their permission first.

'Did you know,' said Mum tonight, 'that
by the age of six, most children will have
seen six thousand hours of television?'
'Is that all?' I said. 'I thought it'd be tons
more than that.'

'In your case it probably is,' said Mum,
looking guilty and sad at the same time.
She went on to say how she thinks I'll be
calmer and more peaceful when my mind
is freed from TV and advertising.

'And you'll be able to concentrate better
on your schoolwork,' chipped in Dad.

My mum's bad enough – but my dad's a
scary dude. Even when he's in a good mood
he looks as if he's been dead for at least a
week.

But tonight when I told him the show I
wished to watch, his face turned bright red
with rage. 'That sounds like utter tripe . . .
and if you haven't got better things to do
with your time, I'll find you something else
to do.'

Mum managed to change his mind. I
heard her whisper, 'The important thing is
that Tobey is making choices.'

But the horror didn't end there. Dad
insisted on watching the show with me. It
was called
KIDZ
. And straightaway Dad
started complaining about the spelling.
'Why don't they spell the word properly?
It's K-I-D-S with an "S".'

'They just wanted to be a bit original,' I
explained patiently, 'because it's a cool,
new show.'

Then the presenter started speaking
and Dad gave this great bellow of fury.
'Why can't presenters today pronounce
their words properly? It's lazy and sloppy.'

'Are you going to watch this programme
or annoy me?' he snapped.

'I can do both,' I quickly replied.

Ever since she moved here last October, a
pack of girls in Georgia's class have been
making her life a misery – for no reason at
all. They keep stealing her stuff and doing
mean little things like . . .

Well, the first time I ever spoke to
Georgia (she goes to an all-girls school and
I'm at an all-boys school – boo, hiss) was in
the local newsagents one day after school.
I went up and asked if I could take something
off her back.

I knew right away she thought I was
mad – people are always thinking that
about me, actually. I can't think why. But
she said, 'Yeah, all right,' while getting
ready to run for her life from this loony
boy.

But instead I peeled off a massive sign
which said 'MOST UNCOOL GIRL ON
THIS PLANET', and she gave this huge
gulp of horror and yelped: 'Oh no.'

She looked so distressed I said quickly,
'Look, don't worry, no way are you the
most uncool girl on this planet. I've seen
loads of girls who look more uncool than
you . . . In fact, I've passed at least two on
my way home tonight.'

And suddenly she was laughing – a bit
hysterically, but she certainly seemed to
have cheered up which was the main
thing. And then she said, 'I'm Georgia, by
the way.'

'And I'm the great Tobey – but you can
just call me Tobey.'

And in that moment a top friendship
was born.

Georgia hasn't even told her mum about
all these girls picking on her at school –
she's only told me. So I try and give her the
best advice my brain cells can manage.

And tonight I said, 'You've just got to rise
above it and never ever let them see you're
bothered.'

Normally Sunday afternoons are dead
boring (so are Sunday mornings, come to
that. But not this one coming. For Georgia's
mum will be zooming along to watch the
stars arriving at a film premiere in
Leicester Square in London. She often does
that. In fact, I glimpsed her on TV once in a
great crowd outside a cinema, cheering the
stars and getting their autographs. But for
the first time ever, she is taking Georgia –
'I think you are now old enough to appreciate
an experience like this' – and also me!

I just know this is going to be a significant
event in my life.

Did you know people dress up to watch
film premieres? No, I didn't either. And
normally I hate wearing my suit, but it
will be a pleasure for tomorrow.

Of course my parents don't understand
the importance of the occasion at all. I
hate to say this, but it is totally beyond
them. I thought they gave me my train
fare to London very grudgingly too.

Then Mum asked, 'But what exactly are
you going to see?'

'Another world, Mum,' I replied.