Read How to Kiss a Cowboy Online

How to Kiss a Cowboy 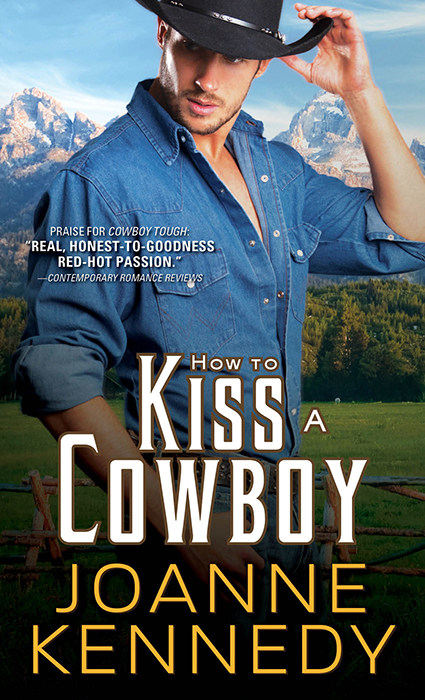 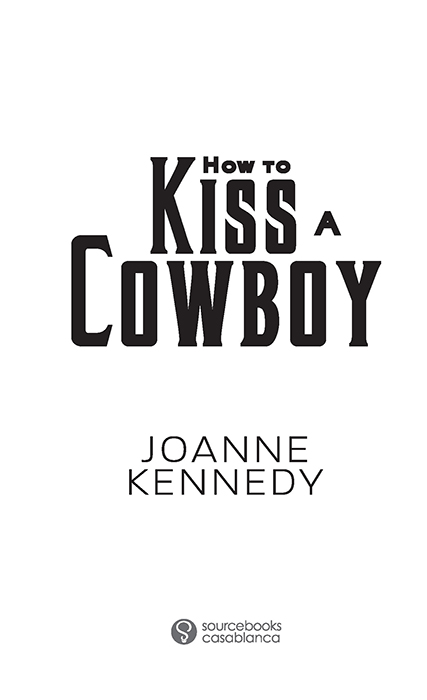 How to Handle a Cowboy

An Excerpt from
How to Wrangle a Cowboy

To Mum, who taught me to love reading and let me read her racy romance novels when I was too young to understand the racy parts. You showed me that anything worth doing is worth doing well, and you loved me no matter how much I screwed up. This one's for you!

Suze Carlyle edged through the shadows at the far end of the Rodeo Days beer tent, praying she could make it back to her trailer before anyone noticed her. A hubbub at the bar made her pause, and when she saw the cause, she couldn't help but smile.

Brady Caine had arrived, strolling into the tent with a loose-hipped swagger that said “cowboy” as clearly as the worn spots on the seat of his jeans. Tall and tan, with rugged good looks and an easy smile, he barely had time to rest one hip on a bar stool before he was surrounded by a flock of pretty cowgirls who fluttered around him like hummingbirds squabbling over sugar.

He had a woman under each arm and another in his lap before Suze had time to blinkâa blond, a brunette, and a redhead. Did he do that on purpose, or what?

Suze knew who the women were. Miss Wyoming, Miss Montana, and Miss Arizona. All three were perfectly coiffed, with curls spilling out from under their fashionably tilted hats. They wore jeans so tight it probably hurt to move, but their practiced smiles never wavered.

Neither did Brady's, though his smile was as real as the rest of his cowboy credentials. Most guys worried about somethingâa tough bull, a bad score, or getting nacho sauce on their shirtâbut not Brady. Whether he was chatting up women, riding a rank bronc, or eating sloppy fair food, he was equally at ease.

Watching him, Suze wished she could somehow absorb the magic that made him fit so securely into the world he'd chosen. Unless she was in the saddle, she always felt at least a little bit awkward and out of place.

She wondered which woman he'd choose, but to her surprise, he was easing his way out of the three-way clutch. For a second, she caught a rare glimpse of panic in his eyes. The redhead had entwined herself around him so thoroughly he looked like a motherless calf tangled up in a barbed-wire fence.

Suze looked down at her boot tips and smiled. She couldn't help it. Sometimes she felt like she had a mean little devil inside her, because watching Brady Caine reject those rodeo queens made her feel
good
.

But it wasn't sheer meanness that made her feel that way. She and Brady had been friends when they were younger, and she hated to see him snagged by the wrong kind of woman.

She gave herself a mental slap. She didn't know what the right kind of woman was. Not for a man like that. She just wanted him to be happy, healthy, andâ¦hers.

She continued to skirt the dance floor, staying in the shadows until she slammed into Miss Arizona, who was heading for the ladies' room in a huff. Excusing herself, Suze had almost made it to the exit when she was startled by a voice in her ear.

“What are you smiling about?”

Brady
Caine.
She was so shocked to see him, she told him the truth.

“Those women,” she said. “They thought they'd caught you.”

“Nope.” He smiled, his brown eyes warm and sweet as hot fudge. “They didn't catch me. You did.”

“You caught me. I watched you ride today.” He shook his head. “Man, oh man. Never saw a woman ride like that. You're not scared of anything, are you?”

She told her heart to stop beating faster. She told her face not to flush. She told herself not to admit she was scared of
him
, and of the way he made her feel.

She told all the other parts of her body not to react too, but it was useless. Brady Caine made her shimmer inside. She didn't know how to respond to the compliment, so she dug down deep inside herself and found a little sass left over from the day's victory lap.

“I don't know how I caught you, 'cause I wasn't fishing.” She struggled to keep a tremor out of her voice and pasted on a confident smile. “Why don't you go unbreak the heart of one of those poor rodeo queens? I'm going home.”

How could she say no? He was just being nice.
Nice
, dammit.

She knew Brady's attention didn't mean a darned thing. He thought he was being nice by talking to the girl in the baggy jeans and scuffed boots, the social misfit who didn't know how to dress or flirt or sparkle like the other girls.

So he'd go and make her feel special, like he always did, and when she was back at her trailer alone, she'd have to deal with all the foolish hopes and stupid dreams he'd left behind. Meanwhile, he'd move on and be nice to some other girl.

It had taken years to learn that lesson, but she'd learned it well. She had no hopes and no dreams where Brady Caine was concernedâalthough there were a few fantasies left over from high school.

When he'd looked at the rodeo queens, he'd seemed mostly interested in their shirt buttons. But he kept glancing at Suze's face, and she was sure he could see what she was thinking.

She chased those fantasies out of her head and undid an extra button, hoping to distract him, but he kept scanning her face. Reading her. Analyzing. It feltâ
what
was
the
word?
Invasive
. Something like that.

“Stop it,” she said without thinking.

She waved her hand vaguely. “That.”

They'd stepped outside the tent now, into the soft, blue night. It had rained earlier, a quick summer storm that was all flash and rumble with barely a sprinkle of rain. Strings of twinkle lights dangled from the edges of the tent, and the distant lights of the midway were reflected in a few scattered puddles, giving the asphalt a supernatural sheen. Suze could hear the carnival barkers hawking their games in faraway voices, luring fairgoers with the promise of giant teddy bears and Elmo knockoffs.

Brady took her hand and stopped so abruptly she couldn't help spinning around to face him.

“I've stopped walking.” His voice was low, and he pulled her a little closer. Not too close. No more than if they'd been dancing the two-step. But it was closer than they should be. She could feel those hopes and dreams billowing from her subconscious like ghosts rising from the grave.

“That's not what I meant.” She stared down at her toes.

His tone gentled. “Then what did you want me to stop?”

Suze shook her head, further undoing her long blond braid. As usual, it had loosened from the day's riding, but not enough to hide her face.

“Stop looking at me.”

She wished she'd worn a hat, so she could tug the brim down and hide her eyes. Nerves were making her stomach burn, but there was another kind of heat in her bellyâa warm, rich stew of sensation set on a slow simmer.

He tugged her closer. “I like looking at you.”

He was teasing her. It should make her mad, but there was something so gentle about it that it felt good. Was teasing the same as flirting? Because this felt like flirting.

“Go back to your rodeo queens,” she said. “They're into this kind of stuff.”

“What kind of stuff?”

She shook her head and felt her braid flop from side to side. “Don't take this wrong, but my relationship with my horse is about the only one that matters right now. I need to focus, and you're distracting me.”

“Distracting you from what?”

“From being the best.” The answer came quickly to her lips. “I need to get back to my trailer so I can watch videos of my races today. To see how I can improve.”

They stood at the edge of a puddle, and the glistening swirls at the edge framed their reflections in light. It was like seeing their aurasâBrady's golden, her own a dim blue.

“Don't you ever think about anything but winning?”

“It beats thinking about losing.”

He laughed softly and touched her face. Just a touch, at the temple, but it felt invasive again. Invasive? No,
intimate
. That was the word. It drew her in, somehow, making the world around them fade away.

“When did you ever lose anything?” he asked.

“I win races. But other stuffâ¦” She dropped his hands and shoved hers in her pockets, staring down at the puddle. “I lost my mom to cancer, my dad toâI don't know. I think I lost him to my mother's ghost, or something. And if I don't keep winning, I'll lose the ranch. Dad mortgaged it again when Momâ¦you know. The medical bills.”

She regretted the words as soon as she'd spoken them. You didn't go talking about serious stuff when a guy flirted with you. You were supposed to keep things light. Flirt back, if you liked the guy. But she had no idea how to do that, so she'd blown it.

It was just as well. Brady would leave now. The hopes and dreams would haunt her for a while, but eventually they'd slip back into their graves and life would go on as usual.

“I'm sorry.” He said it simply, as if he really meant it.

Poor guy. She really shouldn't have dumped all that on him. Sucking in a deep breath, she tilted her chin up and gave him a smile straight from the winner's circle. “There's nothing to be sorry about. It's made me stronger. I might have lost a lot in life, but on horseback, I'm unbeatable.”

“You are.” Brady grinned and chucked her under the chin. “You are unbeatable.”

She was glad she'd had the nerve to brag a little. Basking in the light of his smile, she actually felt like the winner she was. Prize saddles, gold buckles, and blue ribbons couldn't compare to the ultimate prize: the smile of Brady Caine.

Heaven With You by Rebecca Julia Lauren
The Pulptress by Pro Se Press
Losing Nicola by Susan Moody
Unholy Matrimony by Peg Cochran
Stories and Texts for Nothing by Samuel Beckett
Find Me (Life After the Outbreak, Book 2) by Baker, LJ
Easter Island by Jennifer Vanderbes
Animal Kingdom by Iain Rob Wright
Recessional: A Novel by James A. Michener
Fast Track by Cheryl Douglas
Our partner