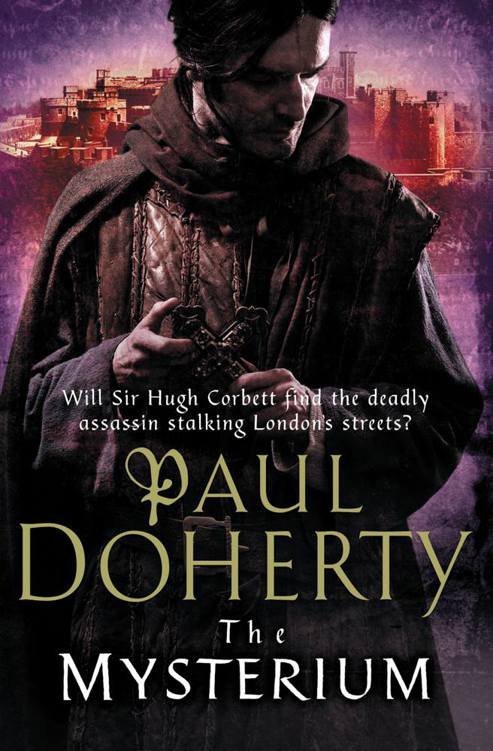 headline
Copyright © 2010 Paul Doherty
The right of Paul Doherty to be identified as the Author of the Work has been asserted by him in accordance with the Copyright, Designs and Patents Act 1988.
Apart from any use permitted under UK copyright law, this publication may only be reproduced, stored, or transmitted, in any form, or by any means, with prior permission in writing of the publishers or, in the case of reprographic production, in accordance with the terms of licences issued by the Copyright Licensing Agency.
First published as an Ebook by Headline Publishing Group in 2012
All characters in this publication are fictitious – apart from the obvious historical characters – and any resemblance to real persons, living or dead, is purely coincidental
Cataloguing in Publication Data is available from the British Library
This Ebook produced by Jouve digitalisation des Informations
eISBN : 978 0 7553 7348 2
HEADLINE PUBLISHING GROUP
An Hachette UK Company
338 Euston Road
London NW1 3BH
www.headline.co.uk
www.hachette.co.uk
Table of Contents
Title Page
Copyright Page
Letter to the Reader
About the Author
Also by Paul Doherty
Praise for Paul Doherty
Dedication
Prologue
Chapter 1
Chapter 2
Chapter 3
Chapter 4
Chapter 5
Chapter 6
Chapter 7
Chapter 8
Chapter 9
Chapter 10
Chapter 11
Chapter 12
Chapter 13
Chapter 14
Chapter 15
Author’s Note
History has always fascinated me. I see my stories as a time machine. I want to intrigue you with a murderous mystery and a tangled plot, but I also want you to experience what it was like to slip along the shadow-thronged alleyways of medieval London; to enter a soaringly majestic cathedral but then walk out and glimpse the gruesome execution scaffolds rising high on the other side of the square. In my novels you will sit in the oaken stalls of a gothic abbey and hear the glorious psalms of plain chant even as you glimpse white, sinister gargoyle faces peering out at you from deep cowls and hoods. Or there again, you may ride out in a chariot as it thunders across the Redlands of Ancient Egypt or leave the sunlight and golden warmth of the Nile as you enter the marble coldness of a pyramid’s deadly maze. Smells and sounds, sights and spectacles will be conjured up to catch your imagination and so create times and places now long gone. You will march to Jerusalem with the first Crusaders or enter the Colosseum of Rome, where the sand sparkles like gold and the crowds bay for the blood of some gladiator. Of course, if you wish, you can always return to the lush dark greenness of medieval England and take your seat in some tavern along the ancient moon-washed road to Canterbury and listen to some ghostly tale which chills the heart . . . my books will take you there then safely bring you back!
The periods that have piqued my interest and about which I have written are many and varied. I hope you enjoy the read and would love to hear your thoughts – I always appreciate any feedback from readers. Visit my publisher’s website here:
www.headline.co.uk
and find out more. You may also visit my website:
www.paulcdoherty.com
or email me on:
[email protected]
.
Paul Doherty
About the Author
Paul Doherty is one of the most prolific, and lauded, authors of historical mysteries in the world today. His expertise in all areas of history is illustrated in the many series that he writes about, from the Mathilde of Westminster series, set at the court of Edward II, to the Amerotke series, set in Ancient Egypt. Amongst his most memorable creations are Hugh Corbett, Brother Athelstan and Roger Shallot.
Paul Doherty was born in Middlesbrough. He studied history at Liverpool and Oxford Universities and obtained a doctorate at Oxford for his thesis on Edward II and Queen Isabella. He is now headmaster of a school in north-east London and lives with his wife and family near Epping Forest.