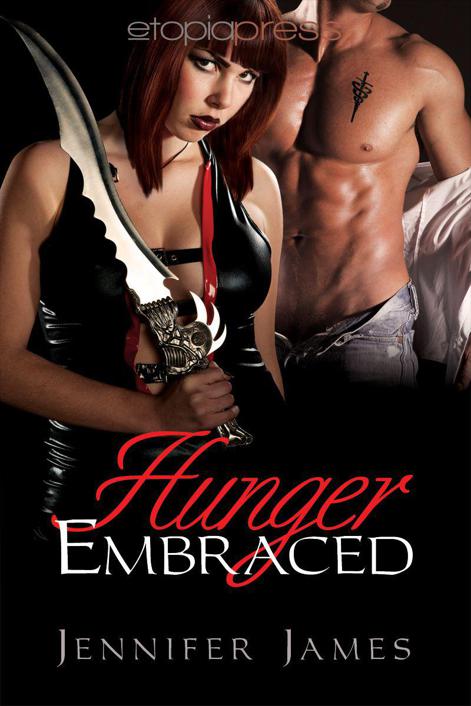 ~ Look for these titles from Jennifer James ~

“…I absolutely loved this book from start to finish! No if’s, and’s, or but’s about it, this novella hit the spot for satisfying my craving for a short, smexy, romantic read.”

~ Look for these titles from Jennifer James ~

The Hunger Series Book One

For Rachel Firasek, excellent editor, my favorite stalker, and the first person to declare Daniel her book boyfriend. I’m glad you took the bait.

I stepped out of my aged apartment building into mid-sixties temperatures and clear blue skies, smiling like a fool while popping my last few jellybeans into my mouth. Fall is something special in Ohio. There’s a crispness to the air, and the dying leaves blaze with filtered sunshine. The candy caught somewhere between my molars and uvula when I noticed the vampire loitering at the corner.

I decided to direct a thought to him and see what happened.
“Can you hear me?”

His smile returned, wider this time, displaying perfect white teeth and dimples. A monster with dimples? Fan-sucking-tastic. I amused him.

One mind-reading vampire meant there had to be more out there. Just when I assumed I knew the rules of the game, another curveball came my way. I curled my fist around my keys until the sharp edges of the metal dug into my palm. We stared at each other, me doing my best imitation of a scary, angry woman, him grinning back, flashing white teeth, dimples, and a ridiculous package. Not that I looked between his legs again. That would be rude.

I whirled and stomped toward the bus stop. Ignoring a dangerous being and hitting my new heels on the sidewalk filled me with satisfaction. The show of bravado was stupid, but he needed to know I wasn’t scared of his freaky telepathy.

He could go rot for all I cared. Finding me didn’t mean anything.

Sensations coursed over me, hardening my nipples to pebbles. My skin tightened, and electrical tingles bathed my scalp. When it hit my belly, I stopped walking and gripped the brick of a nearby building with my right hand, digging my fingers into the masonry and using the bite of the rough stone to center myself. The sensitive flesh between my legs swelled and throbbed as I became overwhelmed with an onslaught of images in my head.

Me ripping his shirt up the middle, running my lips and tongue across his muscular, beautifully defined chest, biting his nipples until they were stiff. And, oh, look at that tattoo.

One more thing to thank Daddy dearest for. The sexual desires and fantasies of the people around me invade my brain if they’re thinking about them hard enough.

This needed to stop right now.
“Goddamn it! Get out of my head asshole!”

He flinched at the mental shout and leaned one shoulder against the wall I gripped. I stamped my foot. Damn, I’d missed him closing most of the distance between us. The closer he came, the better he looked, and my body’s reaction intensified. I’d moved toward him, halved the space remaining before I realized it.

Surfer boy straightened and smiled at me like he’d already seen me naked and panting. Like he knew I was a sure thing. The heat in the possessive sweep of his gaze pissed me off even more. I spun on my heel and left for the bus stop. If I hurried, I’d make it to work ten minutes early for a change.

My boss was ready to put my head on a stick. Perpetual lateness doesn’t tend to endear you to your superiors. At least my boss thinks she’s my superior. In fact, she’s a fat, dumpy bitch. I considered trying to foist off my latest tail on her, but no matter how annoyed I was, he didn’t deserve it. She definitely needed to get laid though.

Maybe I could make a deal with him. No. The idea fled my mind almost as quickly as it entered. What if he ate her? I’d feel awful.

The smell of the ocean surged up and flowed over me, filling my nostrils, and bathing my lungs. I took another breath, deeper, longer, swelling my chest out, my diaphragm expanding until the muscle protested to bring more of the scent into myself. Birds called to each other through the wind. Water rushed and retreated over sand. The sigh of a breeze filled my ears.

Stuttering to a stop in the middle of the sidewalk, I barely flinched when a passerby knocked me off-balance. I could taste the sea on my tongue. The skin on my face tightened and heated under a low-hanging noon sun at the beach. The sensations overwhelmed and terrified me. This was entirely new. Just who was this guy anyway?

The surge of magic intensified when Mr. Tall, Tanned, and Blond gripped my elbow. My teeth clattered together, and a chill expanded up my knees to my belly and wrapped around my neck, forcing an involuntary whimper past my lips.

I drowned in his magic. It filled my lungs, choking, smothering.
“Please help me.”

His gaze bore into mine, pupils contracting to twin black holes. My chest expanded in slow motion, the breath deep and long, releasing in a swoosh that carried the weight of liquid with it. The magic finally faded away in a slow retreat. A grumpy sigh exploded from my lips.

“Gee, thanks for almost killing me.” I gave his hand a significant glance, but he didn’t remove it. Why did they always think they could touch me like that? Like they had a right to it, a right to me?

I jerked my arm away and resumed walking. The simple contact of his hand through the fabric of my suit jacket eroded my self-control. My nipples throbbed, and the flesh between my thighs clenched in anticipation.

The scuff of shoe leather on cement reached me.

“Please. I’m not normally like this. I can’t control—”

I looked at him over my shoulder, drowning in the pull of our bodies and the magnetism he radiated. My fear of his power was calmed by the look on his face and set of his body. “You smell like the ocean. Salt, sun, and seawater.” And a crushing power capable of sweeping me away with the tide.

“Do not fear me.” His nostrils flared, and his hands clenched into fists on his hips. “I need your help. Please, Miranda.” The words were a whisper of sound carried on a breeze that kissed whitecaps and bore gulls aloft.

I studied him, taking in classic, chiseled features balanced with a perfect, straight nose, strong cheekbones and jaw, thick eyelashes, and a full mouth. I flicked a glance at his eyes, meeting them head on and gulped around the knot in my throat. Need and recrimination swam in his expression. He wanted to have sex with me. Needed to have sex. And he hated himself for it. Maybe even hated me for it.

I spun around and walked back to my building knowing he would follow. He had to. Sometimes biology can be such a bitch.

Ignoring him now meant he’d be here waiting when I came home from work. The energy boiling off him indicated his control hung by a thread. I’d made that mistake before. The consequences hadn’t been pretty. Two days of non-stop screwing left both the red-haired vamp and me battered. That vampire’s hunger was satiated, but I’d lost ten pounds and looked like I’d aged years.