Read Hunter of the Dead Online

Hunter of the Dead 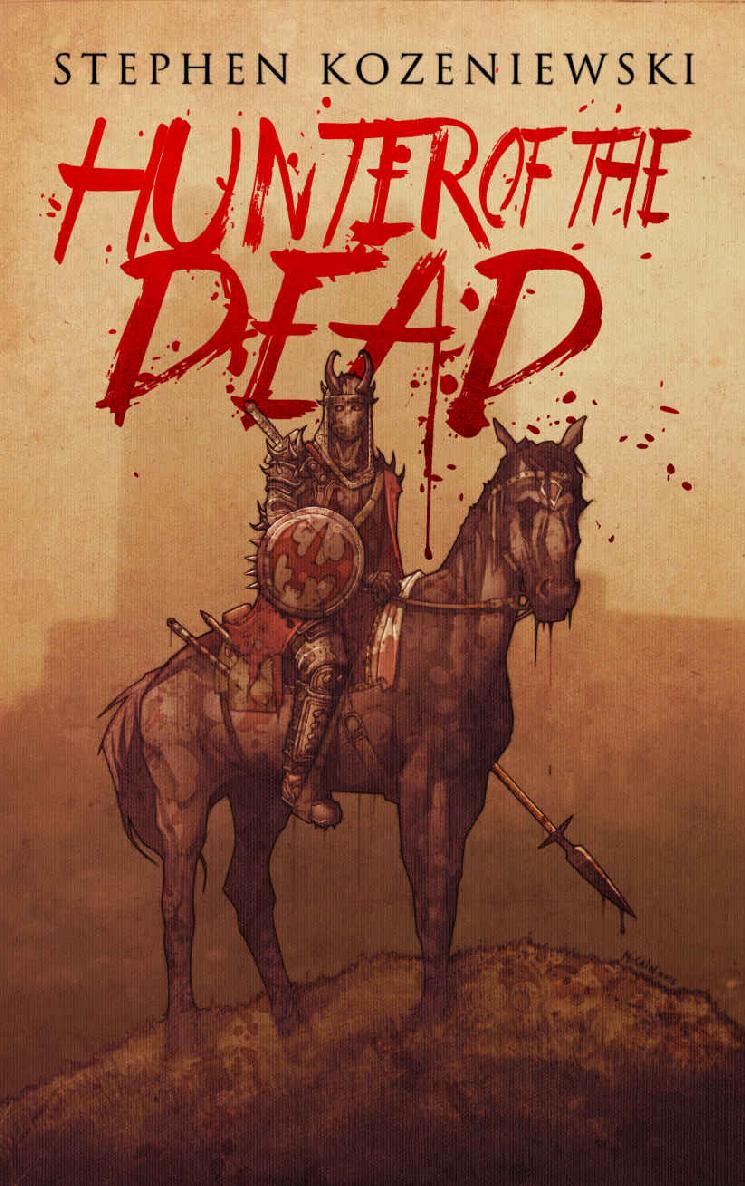 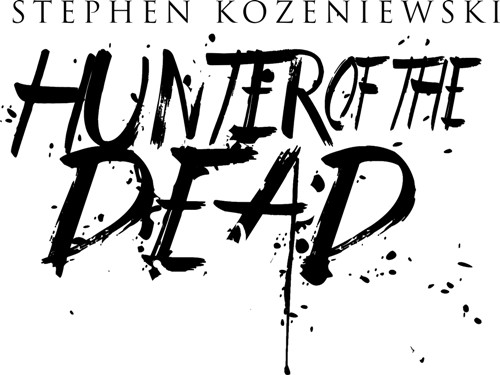 “Hunter of the Dead” © 2016 Stephen Kozeniewski

This is a work of Fiction. All characters depicted in this book are fictitious, and any resemblance to actual events or persons, living or dead, is purely coincidental.

All rights reserved. No part of this book may be reproduced in whole or in part without the publisher’s written consent, except for the purposes of review.

This novel is dedicated to John Waxler, without whom Cicatrice, Idi Han, and crew would still be consigned to their crypts.

Miranda ran her hand over the creature’s bald, scaling head to calm it. In response, it moaned in hunger through its muzzle.

“Shh shh,” she whispered gently, almost as though comforting one of her own children, “soon enough.”

The sounds of gruesome dismemberment and ravenous gorging drifted under the massive oaken doors to Inessa’s chamber. As usual, the master’s favorite was taking her time devouring some morsel while Miranda was stuck waiting on her to be finished so she could clean up. The midden-beast stirred again.

“There, there,” she whispered gently, scratching it under the ears.

Miranda knew each of the midden-beasts by sight. Secretly, she had a name for each, and though she had never been explicitly forbidden to name them, she had a strong suspicion the master would’ve punished her terribly if he’d caught wind of her naming the dumb brutes. The one she held on a leash now she thought of as Snuggles.

Snuggles was a gangly, hunched- over creature with only the barest scraps of sackcloth and burlap clinging to its thighs hiding its disgusting manhood. Its skin was dun, approaching gray, and its limbs were long and gaunt, almost skeletally thin. Its face was barely human, actually more mashed in like a pig’s or an owl’s, and only the barest hint of human awareness flickered in its sallow yellow eyes.

Each of the midden creatures looked somewhat similar to Snuggles, though none were identical. All were hideously misshapen in their own way, some sporting deformities and tumors, others scaling almost like fish or reptiles.

The sound of smacking lips and crunching bone from within the chamber abruptly ceased. Miranda straightened her back and tugged on Snuggles’s leash to keep him from bolting when permission to open the door came. A man on the other side of the door suddenly spoke out in a recognizably Scottish brogue.

She took a deep breath and composed herself. She wasn’t that stuttering child anymore.

The door opened, startling her. Since being chosen by the master to receive The Long Gift, Inessa had grown noticeably surly and lazy. As a result, she hardly ever opened the door herself. A man emerged from Inessa’s chambers, something that was not only strictly forbidden but was completely impossible. Grown men (except the master, obviously) were not allowed on the compound.

Wearing a ripped, sleeveless denim vest and sporting a bleached-white Mohawk, the man seemed like a reject from an ‘80s band. Though he didn’t seem like the type to join the military (far from it, in fact) there was something martial about him, from the combat boots he wore to the pins and medals that festooned his vest. Like an extension of his Mohawk, a stripe of white paint bisected his face.

Miranda cast her eyes down. One of the rules of the compound was not to look at men. That had only ever meant the master before, but…

The Mohawk man grabbed her chin, nearly shattering her jaw with the strongest grip she had ever felt, and forced her eyes to come level with his own. Her long auburn hair hung over her face. She hoped it would hide the salty wetness of her eyes from his view, but a moment later he gently tucked her locks behind her ears and laid bare her weeping face. He seemed to stare straight through her, as though searching for something at the bottom of her eye sockets. His nostrils flared like a bloodhound’s and she realized he wasn’t concentrating on what he was seeing at all.

“You’ve eaten garlic today,” he stated with just the barest hint of a Continental accent. “It’s on your clothes as well.”

The sister wives who had not yet been granted the Long Gift had prepared spaghetti for supper and Miranda, like all the others, had done her part in the kitchen.

“Yes,” she squeaked through pinched fish-lips, as though he had asked a question.

He let go of her as abruptly as he had grabbed her. Then his whole expression changed. A smile spiderwebbed across his face and he clapped his hands together.

“Italo Scavatelli,” he said, bowing and doffing an imaginary cap, “at your service. Oh, and who’s this little fellow?”

Scavatelli dropped to his knees and scratched Snuggles under the ears.

“Scav!” the Scotsman within shouted sharply, “Who’s there?”

“Oh, it’s just one of Cashley’s disciples. With a ghoul.”

Snuggles strained at its collar, eager to get into Inessa’s room. It obviously smelled something inside. Miranda had never heard the strange creatures be called “ghouls” before but it seemed oddly fitting.

Scav sent the immensely heavy door flying open with a single tap from his pinky fingernail and gestured for Miranda to enter. She obliged and immediately gasped. The walls were painted with blood and a barely living person shivered on the banquet table set up in front of Inessa’s tub, most of the flesh picked from his (or her) bones. Shock or pain kept the nearly skeletal being conscious.

All that was perfectly ordinary, though. Miranda had gasped because the Scot was holding Inessa’s jaggedly severed head by the spinal column, which dangled from her neck like soap on a rope. A few vertebrae still clung to the spinal cord, but most had apparently popped off in the process of what appeared to have been a hasty decapitation.

Snuggles must have felt the leash slacken and took advantage of her surprise, darting towards the half-dead person and snuffling at his exposed intestines. The thing that had once been a man looked down, eyes still moving in his faceless skull. Tongueless, an abortive moan rose from his gullet, as Snuggles disturbed what had formerly been his insides.

“Snuggles!” Miranda cried out sharply, before covering her mouth in embarrassment and worry.

The ghoul retired in frustration, unable to get any tasty viscera through its muzzle into its mouth.

“Snuggles. That’s a hell of a name,” the Scot said, and both of the intruders laughed.

Miranda sheepishly took the ghoul’s leash and presented herself to the two men like a schoolgirl ready to receive her punishment. She tried not to look up, but it was hard to avoid staring at them. Standing side by side they seemed a greatly mismatched pair. Scav dwarved his partner by a wide margin.

As though he had stepped out of a photograph, the Scot wore a military uniform she would’ve guessed originated from some time closer to World War I than World War II. He wore a nameplate which read “MacVicar.” Like Scav, MacVicar also wore facepaint. A white stripe stretched from his forehead to the bottom of his neck where his throat disappeared into his blouse.

MacVicar shook the spinal cord in his hand, sending vertebrae flying and inspiring Snuggles to pounce on top of one that landed nearby.

Scav knelt down and grabbed Inessa’s head, turning it so it faced him. Her dead eyes were frozen, aghast with terror.

“Inessa,” Scav whispered, “What a gorgeous name. And you are a thing of beauty.”

Scav kissed the corpse’s upside-down lips. Rankled, MacVicar shook the spinal cord to ward him off, and very nearly kicked him away like a dog.

“Oy! If you want to screw around with her the rest of her body’s there.” MacVicar pointed at the ivory tub.

Inessa’s arms and legs hung splayed out of the tub, striking an oddly seductive pose despite what had been an obvious struggle. Scav shrugged and walked over. Dragging what was left of her out of the water, he took the body by the hand and the waist, and began to waltz, humming the tune to “I Could’ve Danced All Night.” There wasn’t a drop of blood in the water or, it seemed, left in Inessa’s corpse, judging by how pallid the jagged seam of her neck was. Scav leaned down as though to dip her, and caught Miranda’s panicky eyes as he did so.

MacVicar turned back to Miranda. “What was your friend’s surname?”

“She wasn’t my friend.” It was clear from his look that he wasn’t interested in extraneous information. “I…I mean, we don’t use last names around the compound. We’re all the master’s children.”

MacVicar folded his arms in front of him, the dangling head still caught in his grasp.

Miranda swallowed a lump in her throat, not sure how to respond. She nearly jumped as she felt a tongue tickle her earlobe and Scav’s sonorous voice filled her ear.

“Then I suggest you be more forthcoming.”

As the pseudo-punk waltzed away with his gruesome dance partner, Miranda could tell that MacVicar was losing patience. Suddenly, the half-devoured man on Inessa’s dining board, with a feat of near superhuman strength, raised his head partway up and rasped out a few words. Their exact provenance was unknowable, but the look in his lidless eyes was clear: he was asking for help.

“Oy! Will you let that thing off its leash?”

She looked down, having totally forgotten about Snuggles, though the “ghoul” as Scav had called it, was whimpering and staring longingly at the mostly-dead man. Miranda reached into her pocket, but when she brought out the key to Snuggles’s muzzle, her hands were shaking so badly she dropped it.

“Jesus suffering fuck,” MacVicar muttered, walking over and easily wrenching the wrought-iron muzzle off Snuggles’s face with his bare hands.

“Now then,” MacVicar said, digging into Inessa’s throat and brains like a kid searching for a prize in a cereal box, “you’re telling me Cashley’s calling himself the master. Does he ever call you lot his ‘House?’”

Miranda pursed her lips, pondering what the “right” response was. Scav was still off in his own little world, making a mockery of what was left of Inessa’s corpse. MacVicar pulled a raggedy chunk of brain from Inessa’s head, and tossed it to Snuggles, who abandoned his still-struggling meal to catch it in midair.

“Yes,” Miranda said, “he speaks often of us as his House.”