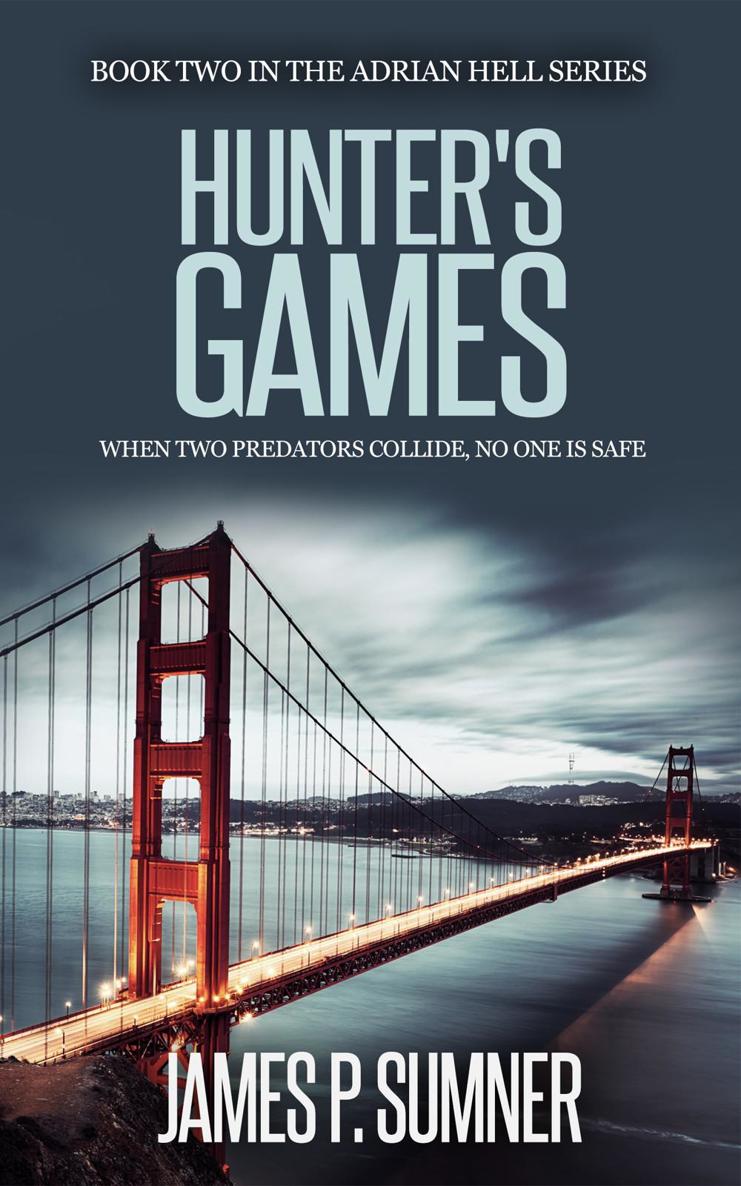 BOOK 2 IN THE ADRIAN HELL SERIES

Copyright © James P. Sumner 2014. All rights reserved. No part of this publication may be reproduced or transmitted in any form or by any means without prior permission of the copyright owner. This novel is a work of fiction. All characters, locations, situations and events are either products of the author’s imagination or used fictitiously. Any resemblance to any person, place or event is purely coincidental.
This eBook is licensed for your personal enjoyment only. This eBook may not be re-sold or given away to other people. If you would like to share this eBook with another person, please purchase an additional copy for each recipient. If you’re reading this eBook and did not purchase it, or it was not purchased for your use only, then please return to your favorite eBook retailer and purchase your own copy. Thank you for respecting the hard work of this author. 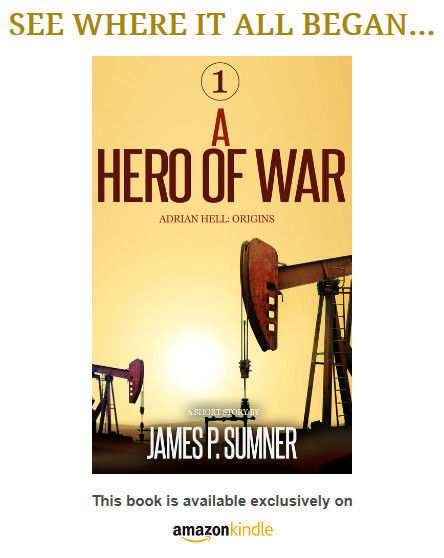 The first short story in the Adrian Hell: Origins series is available now! Visit
www.jamespsumner.com/ahow
to get your copy, and see how Adrian got started!

A Sneak Preview of One Last Bullet (An Adrian Hell Thriller, Book 3)

I STEP OFF the Greyhound bus and take a deep breath. It’s a refreshing sixty-eight degrees and the light breeze is cool against my face. I look around the crowded, temporary Transit Center in downtown San Francisco. It’s a little chaotic, but bearable. The original Transbay Bus Terminal closed back in 2010, and their new Transit Center isn’t due for completion for another couple of years. In the meantime, this temporary terminal acts as the hub for all bus travel both in and out of the city.

It’s been a long ride, so I read up on it to pass the time…

I’ve been on the Greyhound for just shy of nine hours, coming from Oregon and heading straight down the West Coast on Route 101. I rest my trusty shoulder bag by my feet and stretch, feeling parts of my back crack as it celebrates no longer being cramped up on a bus. I sling my bag over my shoulder once more and fight my way through the masses of commuters, heading right down Beale Street.

It feels good to walk again. My legs are stiff from the journey down here, so I’m relishing the chance to get some exercise. It’s a nice, bright September afternoon. I look around as I walk, soaking up the surroundings. San Francisco is a nice enough place. People are friendly, the streets are clean—even the air smells fresh compared to some places I’ve been.

I’m in town on business. And yes, by ‘business’, I mean, ‘to kill someone’. For the past twelve years or so, I’ve worked as a freelance contract killer. I can safely say, with no ego whatsoever, that I’m one of—if not
the
best assassin operating in the United States. Maybe even the world, who knows. For a variety of reasons, my reputation borders on legendary in certain, shall we say, unsavory circles. To everyone else, I simply don’t exist, which is exactly the way I like it.

A local gangster called Nathan Tam has hired me to take out a government official by the name of Richard Blake, who’s apparently bought a sizeable amount of cocaine from Tam and proceeded to mouth off to anyone and everyone about it. Given the company he keeps, Mr. Tam has subsequently attracted some unwanted attention from law enforcement, and wants his client silenced so he can go back to running his business unhindered.

From my point of view, someone who buys and uses drugs shouldn’t be in any kind of position of responsibility anyway, so I’m more than happy to do everyone a favor and kill the bastard.

After walking for close to twenty minutes, I come across a nice bar advertising an afternoon special of a meal and a drink for seven dollars. A quick glance at the menu on the wall outside tells me they have steak and they have beer. They’re pretty much my only two criteria when choosing a place to eat, so I walk inside and find a table at the back.

I sit facing the room with my back against the wall. It’s one of many old habits instilled in me at an early age. It allows me to see if anyone is approaching me that I might otherwise want to avoid. The place looks a lot smaller from the outside. Inside, there are plenty of tables and chairs—many of which have people occupying them. The décor’s simple and clean, with plain colors and small indoor plants strategically placed throughout. There’s no theme to the place. It’s just somewhere nice to go and eat.

A TV is mounted on the wall in the corner—a news reporter is somewhere in the city, talking into their microphone. It’s muted, but the caption across the bottom of the screen says something about an explosion, and the reporter’s standing in the street with crime scene tape behind them. It looks like some kind of restaurant, but whatever has happened has destroyed most of the exterior.

I only have to wait a few moments before a waitress come over and offers me a menu. I tell her there’s no need and order a medium steak, beer, and onion rings on the side.

While I’m waiting, I take out my phone and call Josh.

Josh Winters is my handler and all-round superhero office boy. He finds me work and gathers information so I can carry out the contracts to my usual high standard. The guy’s like my brother, and joking aside, he’s far more than an office boy—I’d be nothing without him, and I have no problem admitting that. We’ve been through a helluva lot together in our time. I just call him my office boy because it gets on his nerves, which keeps me entertained.

He picks up after the second ring.

“Hey, Boss,” he says, in his familiar, happy, British accent. “You made it to 'Frisco safe and sound then?”

“Yeah, got here about half an hour ago,” I reply. “Just getting something to eat now.”

“Yeah, I also know you’ve probably found a meal deal that includes both, and you’ve sprung for a serving of onion rings on the side.”

“Whatever,” I say, laughing.

“So are you all set for this job?” he asks. “Are you sure you know what you’re doing?”

“Well, you could argue that I never truly know what I’m doing...”

We both laugh again.

He means no harm, but I know he has very little faith in me to remember the finer points of any plan we make. In my defense, plans very rarely work and more often than not, you have to improvise anyway. Consequently, I see no point in worrying too much about the plan itself. If you focus on it, you risk losing sight of the immediate situation around you, which can get you killed.

“Adrian, I always worry!” he replies.

“Oh, ye of little faith! So, just to make sure
you
know the details, remind me—what does this Blake guy actually do again?”

Josh sighs, and I can picture him shaking his head at me.

“Tricky Dicky’s the Senior Administrator in the Department of Public Works. That’s like sanitation and restoration and such things,” he explains.

“That sounds… really boring. What do you make of our employer?”

“Tam? He’s as you’d expect, really. He considers himself a businessman who’s simply looking after his interests. He’s got a lot of attention since Blake’s been running his mouth. He prefers discretion in his line of work, as you can appreciate.”

“Blake doesn’t sound like the type to blab about his personal habits. Sounds more like a working stiff in a dead-end nine to five job to me.”

“Well, it’s always the quiet ones.”

“So, I’ve gone ahead and made you an appointment to see Blake tomorrow morning at eleven a.m. You’re going in as a reporter for a local magazine who’s writing an article on the upcoming plans the city has for recycling.”

“Sure does. Better take him out quickly before you die of boredom.”

“Y’know, you don’t have to sound like you’re enjoying this so much.”

“You have to admit, it’s a little funny…”

“It’s not—it’s possibly the dullest contract I’ve ever taken. Remind me again why I’m doing this?”

“Because Nathan Tam is paying you a hundred and fifty grand.”

“Oh, and you’ve remembered the ‘no guns’ rule for this one?”

“Yeah, it’s fine. Going into a municipal building with a gun is pretty much impossible these days, even for me. But I’ve got it all worked out, don’t worry.”

“Great stuff. Will leave you to eat your steak and drink your beer then.”

“Thanks. I’ll give you a call tomorrow when it’s all said and done.”

I hang up just as the waitress returns with my food. I cut into the steak and take a bite—which is succulent and cooked to perfection—and sink back into my chair, relaxing and mentally preparing for the task ahead.

After I finished my steak and beer, I went off in search of a place to stay for the night. Usually, Josh would arrange something prior to me arriving, but I said to him I’d like to have a look around the city, so I’d sort it myself.

As always, my idea of tourism only got me as far as the nearest bar... I found a place that served Bud and had a baseball game on the TV, so I sat down for an hour or so, relaxed, and had a drink. Or two…

For a brief moment, I decided to get my ass in gear and find somewhere to stay, so I left some money on the table, went outside, and jumped on the first cable car that passed by. I traveled through another part of the city, up a steep hill and eventually got off near the Chinatown district.

The first building I saw was another bar…

And here I am. I’m just finishing my sixth beer. This place I’m in is nice—the décor’s warm and relaxing. Not my usual scene, but it’s quiet and I’m actually enjoying soaking up the culture around here. The waitress comes over to collect my empty bottles and I pay my tab with her, leaving her a ten percent tip.

Why Good Girls Don't Get Ahead... But Gutsy Girls Do by Kate White
Indigo Sky by Ingis, Gail
Nana by Chuck Palahniuk
From Manhattan With Revenge Boxed Set by Christopher Smith
CRAVED (By the Alpha Billionaire #1) by St. James, Rossi
Nobody Loves a Bigfoot Like a Bigfoot Babe by Simon Okill, Simon Okill
Jake Ransom and the Howling Sphinx by James Rollins
Bodice of Evidence by Nancy J. Parra
Indefensible by Lee Goodman
BEAST (A Coyotes of Mayhem MC Novel) (Motorcycle Club Bad Boy Romance) by Michelle, Aubrey
Our partner