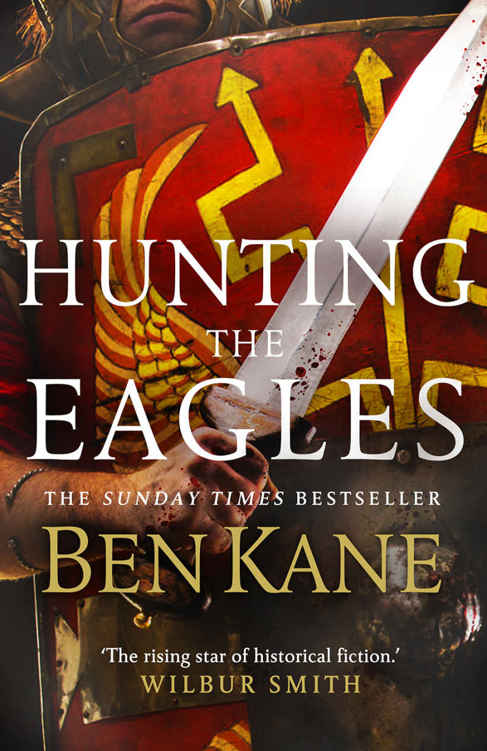 AD
14: Five long years have passed since the annihilation of three legions in the wilds of Germania. Although the bones of 15,000 soldiers now moulder in the Teutoburg Forest, not all the Romans were slain in the bloody ambush.

A CENTURION OUT FOR VENGEANCE

Demoted, battle-scarred and hell-bent on revenge, Centurion Tullus and his legionaries begin their fightback. Ranged against them is the charismatic chieftan Arminius, who is gathering thousands of hostile tribesmen, and determined to crush the Romans for a second time.

The eagle belonging to Tullus’ old legion is still in enemy hands, but as the Romans’ reprisals take their army deep into German tribal lands, he remains convinced that it is within reach. But Arminius and his warriors are perilously close. As battle begins, Tullus and his comrades know they must fight as never before – just to stay alive . . .

The battle of the Teutoburg Forest in September
AD
9 saw three Roman legions annihilated by German tribes in a masterful ambush. While the defeat was a considerable setback for Rome, such humiliations were never taken lying down. By the time five years had passed, an experienced general – Germanicus – and a massive army were in place on the frontier, ready to cross the Rhine in search of revenge. Recovery of the three lost eagle standards was paramount. So too was tracking down and killing Arminius, the chieftain who had masterminded the Teutoburg massacre.

Before the campaign could get underway, events took an unexpected direction with the emperor Augustus’ sudden death in autumn
AD
14. An air of unease settled over the entire empire, and simmering grievances held by the soldiers of the Rhine garrisons flared into open mutiny. Restoring law and order would test Germanicus’ skills to the limit, and make his task in the wilds of Germania that much harder.

Although
Hunting the Eagles
is a work of fiction, it is peopled by historical characters and is based on real events in north-western Germany during the years
AD
14 and 15. I hope, like me, you too will want to lose yourself in this remarkable story, and to march step by muddy step with the Roman legionaries as they fight for their lives against Arminius and his bloodthirsty horde.

The Road to Rome

For Selina Walker, one of the finest editors around.

(Those marked * are recorded in history)

Lucius Cominius Tullus, a veteran centurion, formerly of the Eighteenth Legion, now of the Fifth.

Marcus Piso, one of Tullus’ soldiers.

Vitellius, another of Tullus’ soldiers, and Piso’s friend.

Saxa, another of Tullus’ soldiers, and Piso’s friend.

Ambiorix, Gaul and servant to Tullus.

Augustus, formerly Gaius Octavius and other names, successor to Julius Caesar, and the first Roman emperor. Died in late
AD
14 after more than forty years in power.*

Lucius Stertinius, one of Germanicus’ generals.*

Publius Quinctilius Varus, the dead governor of Germany who was tricked into leading his army into a terrible ambush in
AD
9.*

Arminius, chieftain of the German Cherusci tribe, mastermind of the ambush on Varus’ legions, and sworn enemy of Rome.*

Osbert, one of Arminius’ warriors.

Inguiomerus, Arminius’ uncle and recent ally, and chieftain of a large faction of the Cherusci tribe.*

Segestes, Thusnelda’s father, ally of Rome and chieftain of a faction of the Cherusci tribe.*

Artio, orphan girl rescued by Tullus in
Eagles at War
.

CENTURION LUCIUS COMINIUS
Tullus bit back a curse. Life had been different – more unforgiving – since the slaughter in the forest three years prior. The smallest thing flung him back into the searing chaos of those muddy, bloody days, when thousands of German tribesmen had struck from ambush, wiping three legions, his among them, from the face of the earth. In this case, it was a heavy rain shower over the city of Rome, and the resulting muck on the unpaved street that spattered his lower legs and caught at his sandals.

Tullus closed his eyes, hearing again the German warriors’ sonorous, gut-churning
barritus. HUUUUMMMMMMMM! HUUUUMMMMMMMM!
The battle cry, rising from men hidden deep among the trees, had soured his soldiers’ courage the way milk curdles in the midday sun. If it had just been the chanting that Tullus relived, it might have been bearable, but his ears also rang with the sounds of men screaming in pain, calling for their mothers, and coughing out their last breaths. Showers of spears whistled overhead, punching into shields and flesh alike: disabling, maiming, killing. Slings cracked; their bullets clanged off helmets; mules brayed their fear. His own voice, hoarse with effort, roared orders.

Tullus blinked, not seeing the busy street before him, but a muddy track. On and on it led, for miles, through lines of never-ending trees and areas of limb-sucking bog. It was littered throughout with discarded equipment and the bodies of men. Legionaries. His legionaries. Before the surprise attack, Tullus would have argued with anyone who’d suggested that it was possible for his entire command – a cohort of over four hundred men – to be annihilated by an enemy armed mainly with spears. If they had proposed that three legions could be overwhelmed in the same fashion, he would have branded them insane.

He was a wiser, humbler man now.

The brutal experience – and its aftermath – had embittered Tullus too. Because his legion’s eagle had been lost, the Eighteenth had been disbanded. So too had the Seventeenth and Nineteenth legions. He and the other survivors had been divided up among the other legions serving on the River Rhenus. The final humiliation had been his demotion, from senior centurion to ordinary centurion. With retirement beckoning, it had been a career-killing blow. The intervention of Lucius Seius Tubero, an enemy of his and a senatorial tribune at the time, had been the final blow that ensured an ignominious twilight to his army service. If it hadn’t been for Tubero, Tullus brooded, he might still have commanded a cohort.

He started, wondering who could have recognised him here, hundreds of miles from where he was supposed to be.

‘TULLUS!’ Even though the street was crowded, and the air was filled with everyday sounds – shopkeepers’ competing voices, two mongrels fighting over a scrap of meat, banter between passers-by – the woman’s shrill tone carried. ‘TULLUS!’

Summer in the City by Kojo Black
Protector's Mate by Katie Reus
The Most Beautiful Woman in the World by Ellis Amburn
Fablehaven by Brandon Mull
Nine Lives by Sharon Sala
ESCAPE FROM AMBERGRIS CAYE by Joan Mauch
The Dark Proposal (The Claire McCormick Trilogy) by Cashman, Megan
Waiting for Cary Grant by Mary Matthews
The Time Rip by Alexia James
Personal Assistance (Entangled Ignite) by Louise Rose-Innes
Our partner