Read Hypersonic Thunder: A Novel of the Jet Age Online

Hypersonic Thunder: A Novel of the Jet Age 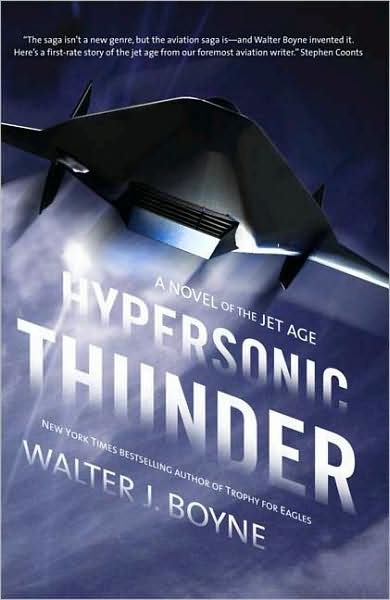 A Novel of the Jet Age

THIS BOOK IS DEDICATED TO MY BELOVED WIFE, TERRI,

The most helpful, generous, spontaneous, good-natured, goodhearted, sweetest person I’ve ever known. Instinctively and intuitively kind, intelligent, and intensely pragmatic, she has been and still is a treasure to hundreds of her friends and family. They value her as I do, for she is a unique, blessed person, a superb artist not only in the art world, but even more important, in the world of human relations.

T
HIS, THE THIRD
novel in a trilogy on the history of jet aviation, reflects the interest, concern, and assistance of literally hundreds of people over many decades, many of whom have passed on. The greatest help often came indirectly, with neither person knowing that help to write a novel was being given. A case in point: The late great test pilot Russ Schleeh used to talk to me at length about his experience in selling the Douglas KC-10 tanker to the Air Force. Neither of us ever contemplated that his wisdom would appear in a book written thirty years later, but you’ll find it in this novel. In a similar way, conversations over the years with aviation luminaries such as Dr. Hans von Ohain, Sir Frank Whittle, Sam Shannon, Bill McAvoy, James Webb, William Pogue, and literally hundreds of others of aviation’s great achievers contributed directly to the information to be found herein.

And, as always, I received great support from the rather small but very tight community of aviation authors. Among them are Clif Berry, Philip Handleman, Dennis Jenkins, Fred Johnsen, Wally Meeks, Mike Machat, Lon Nordeen, Warren Thompson, and many more. Dr. Richard Hallion, a renowned author and historian, gave me insight into the mysterious world of hypersonic flight, and linked me up with Dr. Mark Lewis for further information.

There were many others without whom the book could not have been written, including C. O. Smith, John Helfers, Marty Greenberg, Melissa Frain, Eric Raab, and of course my editor, Robert Gleason.

Sadly, I will have omitted many names in this short list, not from lack of care, but from that familiar problem, lack of memory. I mean no disrespect to those I’ve overlooked, and am comforted by the fact
that most of them will recognize the difficulty that living long confers on memory.

Many thanks go to all whom I’ve mentioned and many more to any whom I may have forgotten.

T
HIS IS THE
story of the fantastically swift rise of jet aviation from a military curiosity to a system of civil and military aircraft that has revolutionized the world.

All of the events pertaining to the advance of jet aviation in this trilogy of novels are real with one exception. All of the production decisions, rollouts, cancellations, first flights, records set, crashes—everything are as they happened. The one exception is in this third volume of the trilogy, in which a fictional hypersonic aircraft is created to bring the story into the next era of the jet age.

All of the real accomplishments are properly credited to the people who made them possible, e.g., Sir Frank Whittle and Hans von Ohain for the invention of the jet engine, Kelly Johnson for the creation of the U-2, Bill Allen and Juan Trippe for initiating the Boeing 747, Andrei and Alexei Tupolev for creating the Tu-144 supersonic transport, and so on through the years.

But these giants would be the first to recognize that the projects attributed to them are the work of a vast system of people—engineers, pilots, mechanics, sales personnel, accountants, and so on. It is, of course, impossible to recognize all of the participants in real time in a novel. Instead, a fictional family, the Shannons, and their associates have been created to provide continuity and insight, and to substitute for all of the thousands of important people who cannot be recognized individually.

Thus Vance Shannon, the patriarch of the Shannon family, finds his way around the world of jet aviation, acting as a facilitator, a lubricant, a pressure pump, for telling the story of the momentous rise of jet aviation from the first successful jet airplanes in 1939 to the hypersonic
scramjets of the future. The Shannons are on-scene for most of the major events, or create relationships with those who are.

In some instances, real events have been compressed in time and space so that they can be related as fiction in the form of the actions of the Shannon family. In all cases, however, there has been no alteration to the effect of the events on the development of jet aviation.

T
om Shannon watched unbelieving as the first group of 120 American prisoners of war formed up in columns of two. They looked strange in their ill-fitting new clothes—dark blue pants, light blue shirts, windbreakers, and some kind of little black bag. The clothes were the only new thing in the entire prison, with its worn walls, tired paint, and rusting iron fixtures.

According to the ceaseless tap code messages, those vibrating signals of defiance, they were being returned home. The POWs had tried to argue that the most injured and the sickest should go first, but the North Vietnamese had insisted on them going back in the order in which they came.

It was the only thing that kept him alive. Even though he was forbidden from mixing with the rest of the POWs, they knew he was there, and their messages had sustained him. It came in many
ways—the traditional tapping, by hand signal, even by bits of string, knotted in a Braille-like code. The tap code told him things had changed in the last year for the others—beatings had stopped, discipline had relaxed, relief packages were not plundered so badly, and food had improved.

But not for him.

His rations had never improved, but his last beating had been four months earlier, when the Rabbit had administered a scientific series of kicks and blows that brought him near death once again. He still ached, especially his ribs, which always seemed to take the longest to heal. One of the most vicious guards, nicknamed the Rabbit for his manner, had an obsessive, inexplicable hatred for Shannon.

The gaunt fighter pilot, former commander of the 6th Fighter Interceptor Wing, watched with envy from his latest cell, perched on the second floor of the main building. They had moved him around at random intervals, apparently determined to prevent him from making any contact with other prisoners. Now, by standing on his toes and clutching the open windowsill, he could peer through a gap in the wooden shutters for a view of the yard where the six buses were parked. Ironically, the Rabbit seemed to be supervising the departure just as he supervised the torture.

Shannon sat down for a moment to gather his strength. It was emotionally draining to see the months-old rumors about the coming freedom suddenly become real—but only for the others.

Painfully he clawed his way up to squint again through the shutters, his vision, once so acute that he could pick out an enemy plane miles distant, now blurred. He knew that Everett Alvarez was probably leading the group. Everett was the longest surviving prisoner, kept here or in other filthy North Vietnamese prisons for eight years. Now Alvarez and the others were being set free, at last. It was incredible.

A wave of trembling fear swept over him. Now he knew why the North Vietnamese had always kept him separate from the rest of the POWs—they never intended to release him.

In his six years of tortured confinement, he had spoken to only one other American, Michael Pavone, his backseater in their F-4 that had been shot down. Pavone had saved his life, nursing him back to precarious health for months. When Shannon had recovered sufficiently to
be interrogated, the North Vietnamese promptly beat Pavone to death, as if punishing him for aiding Shannon.

Six years, that surely entitled him to be in the first group—if they were going to let him go at all. He could never understand why they kept him separated, nor could the other prisoners, who came to know him only by the covert tap code that linked them together, day and night. The other prisoners were naturally suspicious of him at first, fearing that he was a North Vietnamese spy using the tap code to gain information. It took weeks before he convinced them that he was truly an American pilot.

The only rational explanation for his isolation was their resentment for his leading the famous Operation Toro, which trapped and shot down a lot of North Vietnamese MiGs. And later when the North Vietnamese had placed him in one of their crude propaganda films, he had outfoxed them. Even as he parroted their stilted phrases, he had blinked a message in Morse Code with his eyes, one that told the world that he was being coerced. Both events had earned him many beatings. The other prisoners had been beaten for similar things, but were not kept isolated for so long.