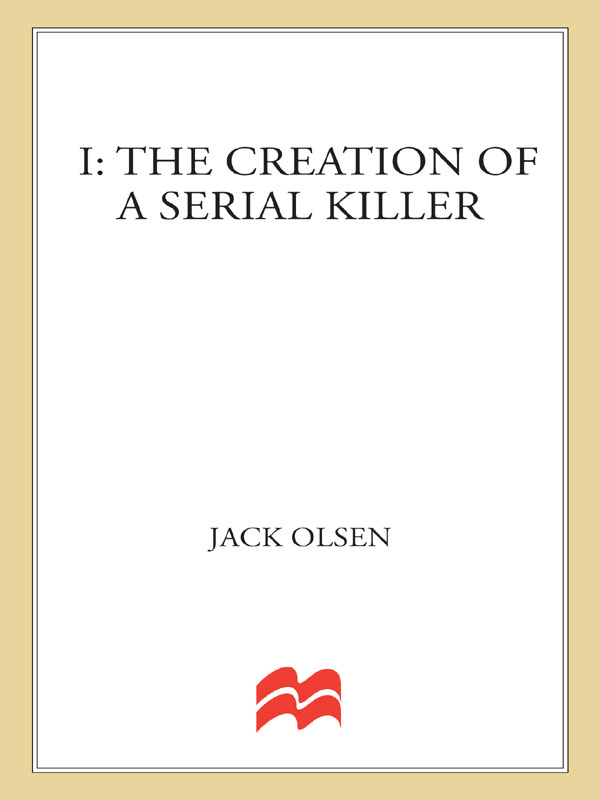 I: The Creation of a Serial Killer

“This book is like an avalanche: it starts strong and rapidly gains momentum as it cascades downward on its destructive journey of serial murder. Truly insightful.”

“It is probably impossible for any law-abiding citizen like the author and most of his readers to understand a homicidal psychopathâespecially one not only driven to kill but also driven to get caught. Given the odds, Olsen explains [Keith Hunter] Jesperson to an amazing degree.”

“Olsen was the most prolific, innovative writer of serious true crime books in recent memory.”

“For the genre, this is crackerjack stuff. Olsen obviously had thorough access to Jespersonâ¦his family, and friendsâ¦True-crime entertainment at its best.”

“Veteran true-crime author Olsen takes the profiling of a psychopath a step further than usualâ¦the gruesome details are nailed down with morbid precisionâ¦Olsen's writing is clear and concise.”

Hastened to the Grave

“
Hastened to the Grave
is not only a jaw-dropping true account of how far a certain Gypsy family would go to separate marks from their money, it is also a cautionary tale about the perils of loneliness in a society that has ceased to value old age.”

“The most satisfying of Olsen's recent books.”

Salt of the Earth

“A literary achievement of the highest order.”

“SALT OF THE EARTH is a powerful, absorbing true story of the terror and tragedy that stalks our violent land, and how an âordinary woman' triumphed over all of it.”

“The cold mind of a criminologist, the relentless spirit of an investigative reporter and the searching heart of a poet all combine to produce Jack Olsenâthe acknowledged master of American crime journalism. SALT OF THE EARTH is both horrifying and upliftingâa remarkable achievement.”

“Jack Olsen's particular gift is his ability to illuminate the souls of his characters.”

“SALT OF THE EARTH is not only an engrossing page-turner about an unthinkable social horrorâit is also a gifted work of immense, uplifting decency.”

âBella Stumbo, author of the Edgar Award-winning
Until the Twelfth of Never

“In SALT OF THE EARTH, Jack Olsen takes what, in less sensitive hands, could have been just another violent story and makes of it a startling mirror-image of the American Dreamâ¦Very few writers can make the rubble of ordinary lives seem worth caring about. Jack Olsen is clearly one of them.”

“Jack Olsen builds tension using characters that leap right off the page. Normal life in America is anything but.”

“Anyone who doubts that women are the stronger sex would be well advised to read this taleâ¦her indomitability gives Olsen the material for one of his most penetrating books.”

“While the Geres' tragedy seems much too common in today's society, their sad but also uplifting story could not have had a more skillful, sensitive narrator.”

“Another solid entry from Olsen. A detailed study of the disintegration of a family.”

Jonathan Rhoades Olsen, “Lefty,” beloved son
We always made each other laugh

3
A Word to the Dead

8
Calling a Bitch a Bitch

9
An Infinite Number of Animals

6
A Plan for the Night

1
A Box Full of Bills

10
Les in the Driver's Seat

5
The League of Serial Killers

On a chilly winter day in Portland, Oregon, Taunja Bennett kissed her mother good-bye and said she was off to meet a boyfriend. She disappeared from sight in the direction of a bus stop, her Walkman plugged into her ears. Lately the twenty-three-year-old high school dropout had been listening over and over to “Back to Life” by Soul II Soul. She carried a small black purse.

Taunja was mildly retarded from oxygen deprivation at birth. She'd been a difficult child. In a cooking class at Cleveland High School, she assaulted a classmate in a quarrel over a piece of cake. Addicted to alcohol and drugs, she was committed to a state hospital for six months. At twenty-one, she frequented northeast Portland bars like the Woodshed, the Copper Penny and Thatcher's. She hustled drinks, shot pool and got into trouble with men. She was petite and prettyâfive-five, with glistening dark brown hair, liquid brown eyes, a trim figure, and a naively impulsive manner. She introduced herself to strangers by throwing her arms around them. Recently she'd complained to her mother that a man had taken her home from the B&I Tavern, beaten her and “pimped me out.” She said she was afraid to go back to the same bar. But her memory had always been short.

ON
J
ANUARY
22, 1990, the morning after Loretta Bennett said good-bye to her daughter, a bicyclist braked hard at a splash of color on a steep embankment above the Columbia River Gorge, ten miles east of Portland. Wisps of fog drifted up from the water and partly obscured the squat stone edifice known as Vista House, a popular lookout and make-out spot.

Just down the slope from the two-lane road, in a greenish coffin of vine maple, devil's club, poison oak and blackberry tendrils, the biker found a young woman's body, faceup, head pointed downhill, arm splayed backward. Her jeans and panties were around her ankles and her bra was above her breasts. A white nylon rope encircled her neck. The fly front on her jeans had been neatly excised, leaving an oval opening. The woman's face looked as though it had been pounded with a hammer.

The body remained unidentified for eight days, until Loretta Bennett saw a police sketch on the evening news and visited the morgue. Detectives were puzzled by the savagery of the killing. It was unlikely that a random acquaintance would wreak such devastation on a fellow human, even in the frenzy of rape. Investigators believed they were dealing with a highly personal act of retribution or revenge.

TWO MORE
weeks passed before police reported their first promising lead. On February 13, Detective Alan Corson of the Oregon State Police interviewed Carol Copeland, the B&I bartender who'd been on duty the afternoon before the body was found. Corson reported:

Ms. Copeland stated on this date, Taunja Bennett arrived at the B&I Tavern sometime around noon to 1
P.M
. She advised that Taunja came into the tavern alone, and Ms. Copeland noticed she was quite wet and appeared to have walked to the tavern in the rain. She stated that Taunja appeared to be in a happy mood, and she purchased a beer at the bar, paying for it with small changeâ¦.

Ms. Copeland stated Taunja began socializing in the bar, talking to various patrons. She began talking to two men who were playing pool at the east end of the bar. She stated Taunja continued talking with the two men playing pool, and at approximately 4â4:30
P.M
., Taunja walked over to the bar and asked Carol if she wanted to go out disco-dancing after Carol got off work at 5
P.M
â¦.

Carol stated she told Taunja that she should not go with these two men because Taunja did not know them and it was not a safe thing to do. Taunja replied she would be OK and returned to where the men were playing pool.

A night bartender described one of the pool shooters as about thirty, a few inches over six feet tall, with short blond hair. The second player was blond and shorter. She recalled serving them a pitcher of beer. At around 8:00
P.M
., she'd noticed that the blond men and Taunja Bennett were gone.

ANOTHER TWO
weeks passed before police announced that they'd caught the killers. They weren't the pool shooters but a May-and-December couple, John Sosnovske and Laverne Pavlinac. The fifty-seven-year-old twice-married grandmother, a state hospital worker, confessed in detail and implicated the thirty-nine-year-old Sosnovske, a rough-hewn sawyer who was already on probation for a series of drunken crimes and misdemeanors. The gray-haired woman told police that her besotted boyfriend had picked up Taunja Bennett in a tavern and driven her to a ravine above the Columbia Gorge, where she'd held a rope around the victim's neck while Sosnovske committed acts of rape and murder. The plump, matronly woman produced a cut-out section of fly front from a pair of Levi's jeans and led police to the spot where she and her lover had dumped the body.

John Sosnovske denied involvement but failed two lie-detector tests. After he was arraigned on murder charges, he tried to shift blame for the killing to a fellow alcoholic who proved to be innocent. Police reported finding a scribbled note in Sosnovske's possession: “T. Bennett: A Good Piece.” The sawyer's light brown hair matched a strand found on the corpse's arm.

Royal Ever After by Winter Scott
Emily's Affair by Kindel, Elijana
The Dark Shore by Susan Howatch
The Iron Ring by Auston Habershaw
Unfair Advantage -The Power of Financial Education by Kiyosaki, Robert T.
Downfall by Rob Thurman
Escape from Evil by David Grimstone
The End of the Trail by Brett Halliday
November by Gabrielle Lord
Team: Alpha (Knights of Ares) by James, Honor
Our partner