"I Heard You Paint Houses": Frank "The Irishman" Sheeran & Closing the Case on Jimmy Hoffa 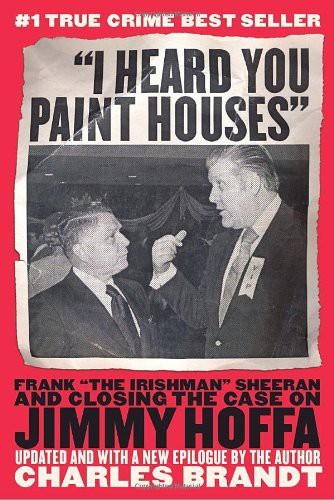 Chapter One
“They Wouldn’t Dare”

Chapter Two
What It Is

Chapter Three
Get Yourself Another Punching Bag

Chapter Six
Doing What I Had to Do

Chapter Seven
Waking Up in America

Chapter Ten
All the Way Downtown

Chapter Fourteen
The Gunman Had No Mask

Chapter Fifteen
Respect with an Envelope

Chapter Sixteen
Give Them a Little Message

Chapter Seventeen
Nothing More Than a Mockery

Chapter Nineteen
Tampering with the Very Soul of the Nation

Chapter Twenty-Two
Pacing in His Cage

Chapter Twenty-Four
He Needed a Favor and That Was That

Chapter Twenty-Eight
To Paint a House

Chapter Thirty
“Those Responsible Have Not Gotten Off Scot-Free”

Chapter Thirty-One
Under a Vow of Secrecy

To my wife,
N
ANCY
P
OOLE
B
RANDT,
to my mother,
C
AROLINA
D
I
M
ARCO
B
RANDT,
and to my father’s memory

I owe a debt of gratitude to my incredibly beautiful, talented, and wonderful wife, Nancy, who gave each chapter and each revision a hard, honest, and sensible edit before I sent it to the publisher. While I was in New York and Philadelphia working on the book Nancy took care of everything else and gave me daily inspiration, encouragement, and support. On the times Nancy would accompany me to visit Frank Sheeran, he would light up like a young man. And I owe a deep sense of gratitude for the encouragement of our supportive children Tripp Wier, Mimi Wier, and Jenny Rose Brandt.

I owe a debt of gratitude to my remarkable mother, who at 89, cooked Italian food for me, put up with me, and encouraged me during the long weeks I stayed in her Manhattan apartment and sat at my laptop.

I owe a debt of gratitude to my dear friend, the publishing icon William G. Thompson—first to publish both Stephen King and John Grisham—who generously lent his expertise as editorial advisor in developing and executing the project.

I struck pay dirt when Frank Weimann of the Literary Group agreed to be my agent. Frank took the project to heart as a piece of history that would otherwise be lost, gave the book its title, and gave Frank Sheeran a nudge in the right direction for his final taped interview.

A special thanks to the talented Kristin Sperber, editor at Steerforth, who, among other things, caught me writing like a lawyer from time to time.

When Neil Reshen suggested that my agent contact Steerforth Press we suddenly had my book accepted by a publisher who is always thinking. Thank you Neil, for steering us to the exceptional Chip Fleischer and his aide, Helga Schmidt.

Thanks to those writers, such as Dan Moldea, Steven Brill, Victor Riesel, and Jonathon Kwitny, whose skillful investigative reporting, at risk of physical harm, uncovered and preserved so much of the history of Jimmy Hoffa, his times, and his disappearance.

Thank you to those agents, investigators, and prosecuting attorneys and their staff whose efforts created many of the headlines and news stories I consulted.

Thanks to my creative cousin, Carmine Zozzora, for his daily encouragement that kept me focused when the going was rough and for his wise counsel every bit of the way, especially when I would bellyache and he would repeat: “Just write the book; the rest will take care of itself.”

A big heap of gratitude to all my superb friends and family who rooted for this book, and to those pals to whom I repeatedly turned for advice, encouragement, and support, especially Marty Shafran, Peter Bosch, Steve Simmons, Leo Murray, Gary Goldsmith, Barbara Penna, Rosemary Kowalski, Jeff Weiner, Tracy Bay, Chris DeCarufel, Jan Miller, Theo Gund, and Molly and Mike Ward. I owe a deep debt in countless ways to Rob Sutcliffe.

Thanks Lynn Shafran for all your advice, and especially for bringing the late Ted Feury to Nancy and me. Thank you, Ted, so much.

Thanks to the award-winning illustrator, author, and artist, my friend Uri Shulevitz, who more than twenty years ago encouraged me to start writing professionally.

And a belated thanks to my inspiring eleventh-grade English teacher at Stuyvesant High School in 1957, Edwin Herbst.

In a summer cottage by a lake in a room full of tearful and anxious members of Jimmy Hoffa’s family, the FBI found a yellow pad. Hoffa kept the pad next to his phone. On the pad Hoffa had written in pencil “Russ & Frank.”

“Russ & Frank” were close friends and staunch allies of Jimmy Hoffa. The giant, iron-muscled Frank was so close and loyal to Jimmy throughout Jimmy’s ordeals with the law and with Bobby Kennedy that Frank was thought of as family.

On that day by the lake the family in the room feared deep in their souls that only a very close friend, someone trusted, could have gotten near enough to harm a cautious, vigilant Jimmy Hoffa—a man who was keenly aware of his deadly enemies. And on that day “Russ & Frank,” mob enforcer Frank “The Irishman” Sheeran and his godfather, Russell “McGee” Bufalino, became leading suspects in the most notorious disappearance in American history.

Every book and serious study on the Hoffa disappearance has alleged that Frank “The Irishman” Sheeran, a staunch Hoffa supporter within the Teamsters, had turned on his friend and mentor. These studies allege that Sheeran was a conspirator and perpetrator, present when Hoffa was killed, and that the killing was sanctioned and planned by Russell “McGee” Bufalino. Among these studies are meticulously researched books, including
The Hoffa Wars,
by investigative reporter Dan Moldea;
The Teamsters,
by Court TV’s founder Steven Brill; and
Hoffa,
by Professor Arthur Sloane.

Cowboy Redemption (Down Under Cowboy Book 6) by Kasey Millstead
Roughing It With Ryan by Jill Shalvis
It Must Have Been Love by LaBaye, Krissie
Deadly Vintage: A Molly Doyle Mystery by Elaine Flinn
The Spirit Who Loved Me: Spirit Whispers Book One by Stacey Virginia Longmuir
Asesinato en el campo de golf by Agatha Christie
Perfect Fifths by Megan McCafferty
magical cures 06.5 - a charming christmas by kappes, tonya
Lord of the Desert by Diana Palmer
The Thief Who Pulled on Trouble's Braids by Michael McClung
Our partner