Read I Want My MTV Online

I Want My MTV 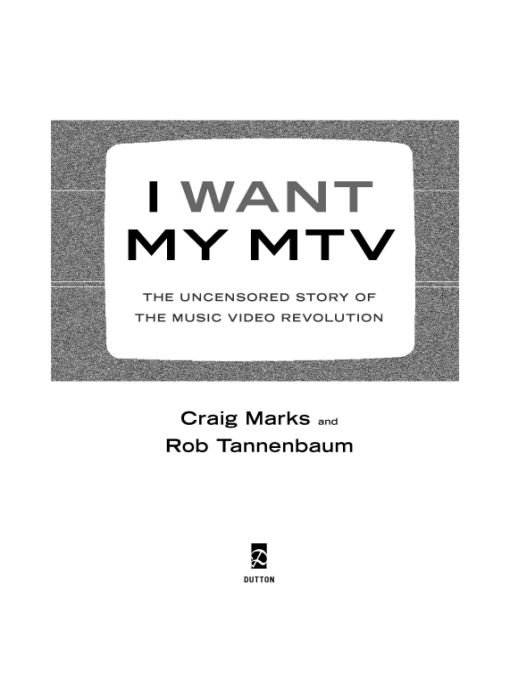 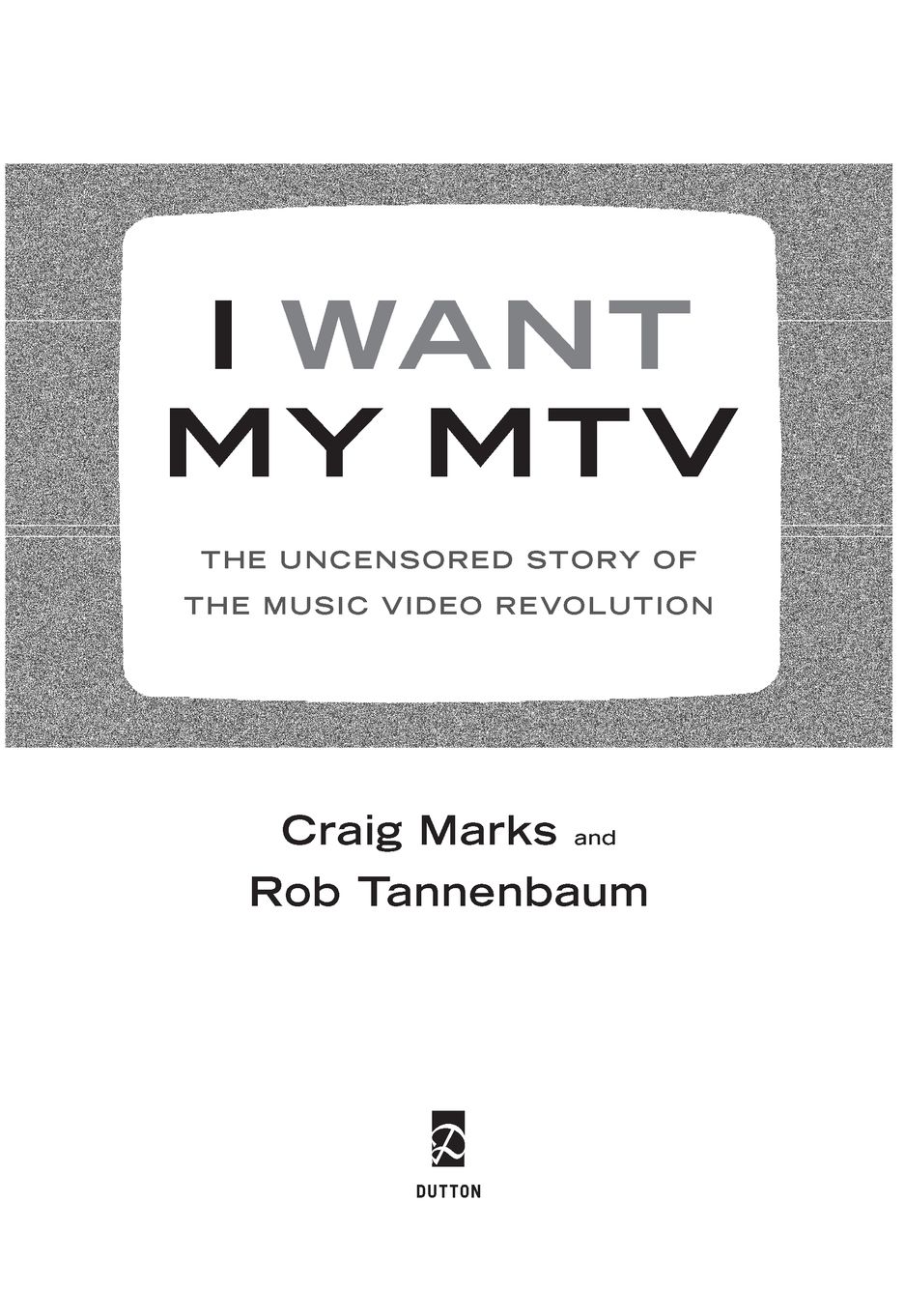 PREGISTERED TRADEMARKâMARCA REGISTRADA
LIBRARY OF CONGRESS CATALOGING-IN-PUBLICATION DATA
Â
Marks, Craig.
I want my MTV : the uncensored story of the music video revolution /
by Craig Marks and Rob Tannenbaum.
p. cm.
Includes index.
ISBN : 978-1-101-52641-5
1. MTV NetworksâHistory. 2. Rock videosâUnited States. I. Tannenbaum, Rob.
II. Title.
PN1992.8.M87M33 2011
791.45'611âdc23 2011032517
Â
Â
Without limiting the rights under copyright reserved above, no part of this publication may be reproduced, stored in or introduced into a retrieval system, or transmitted, in any form, or by any means (electronic, mechanical, photocopying, recording, or otherwise), without the prior written permission of both the copyright owner and the above publisher of this book.
Â
The scanning, uploading, and distribution of this book via the Internet or via any other means without the permission of the publisher is illegal and punishable by law. Please purchase only authorized electronic editions, and do not participate in or encourage electronic piracy of copyrighted materials. Your support of the author's rights is appreciated.
Â
While the author has made every effort to provide accurate telephone numbers and Internet addresses at the time of publication, neither the publisher nor the author assumes any responsibility for errors, or for changes that occur after publication. Further, the publisher does not have any control over and does not assume any responsibility for author or third-party Web sites or their content.

To my mom and dad, who loved me unconditionally and always had cable.
And to Porter, for whom I promise to do the same. (C.M.)
To Gabriela, who links the family that's recently gone
to the family that's soon to arrive. (R.T.)
So the book covers the years 1981 to 1992 . . .
WALTER YETNIKOFF, record executive:
Okay. I don't remember any of that.
Introduction
“RIDICULE IS NOTHING TO BE SCARED OF”
HARDLY ANYONE THOUGHT IT WOULD SUCCEED.
Upon hearing of the plan to launch a TV channel that would show music videos around the clock, businessmen of wealth and experienceâworldly men who ran record companies and partied with rock stars, and visionary men who made fortunes by anticipating the explosion of cable TVâscoffed and snickered. Who would watch this channel? Even if it proved popular, who would advertise there? Why would GM or Anheuser-Busch want to reach this channel's audience, consisting mostly of fourteen- to twenty-four-year-olds? Where's the money in that?
Prior to the launch of this channel on August 1, 1981, only a few dozen people believed it would succeed, and all of them worked at the channel. The start-up staff was a coterie of misfits, inexperienced and determined, and included two one-eyed executives who were later hailed as visionaries. Which is not to say that
everyone
who worked at the channel believed it would succeed. “It sounded like an asinine idea,” Bob Pittman (one of the one-eyed executives) admitted five years after the launch, when the channel was the centerpiece of a $525 million bidding war. It's easy to imagine this as the theme of one of the network's early advertising campaigns, which were usually brash and self-mocking: “MTV: It sounds like an asinine idea.”
There are two kinds of successful consumer products: some fill an existing need by making people's lives easier (toilet paper, or the dishwasher), and others create a need that didn't previously exist (sanitary wipes, or coffee). It's easy to predict success for the first type of product, but harder for the second. In 1981, there was no need for music videos. MTV was an outlet for something that barely existed; the network had about a hundred of them in inventory, mostly by marginal or unpopular British and Australian bands. Not only that, MTV planned to get more videos by asking someone else, record labels, to make and pay for them, then hand them over for free. That's not a business model, that's chutzpah.
But from asinine beginnings, MTV became the sun around which popular culture rotated. The MTV aesthetic during its Golden Age of 1981 to 1992âquick cuts, celebrations of youth, shock value, impermanence, beautyâinfluenced not only music, but network and cable TV, radio, advertising, film, art, fashion, race, teen sexuality, even politics. The channel was plotted to captivate an audience whose interests had been ignored: John Lack, who started MTV, called teenagers “the demographic group least interested in TV,” because TV wasn't interested in teens. Children had cartoons; adults had the evening news and most of the shows that followed it. Teens were an untapped audience, an invisible power. MTV gave them what they wanted, and got them not only interested in, but obsessed by MTV, making it their clubhouse.
Like MGM in the 1930s, or CBS from the mid-'50s to the mid-'70s, MTV became the preeminent arbiter of celebrity. Constant airplay of Michael Jackson videos helped make
Thriller
the best-selling album of all time. When MTV Europe launched in 1987 as the start of a global expansion that now reaches from Brazil to Pakistan, the network's influence expanded beyond the U.S.
Yo! MTV Raps
, which debuted a year later, gave hip-hop its first international forum and accelerated the music's popularity around the world. The channel's first foray into long-form programming, the faux-game show
Remote Control
, introduced dorm-dwelling smart-alecks to novice comedian Adam Sandler. When
House of Style
arrived the next year, it transformed Cindy Crawford from a model to a mogul. Cannily, MTV never tied success to the fate of any one or two stars. (“MTV works in dog years,” Downtown Julie Brown wisecracked, after her VJ tenure ended.) Unlike traditional networks, which spend millions to retain popular shows and actors whose popularity is bound to dwindle, MTV sees talent as disposable and replaceable; the network is the star, not the performer. Martha Quinn got five years. Tawny Kitaen got a year and a half. A-ha got three months.