Read I Wonder What Human Flesh Tastes Like Online 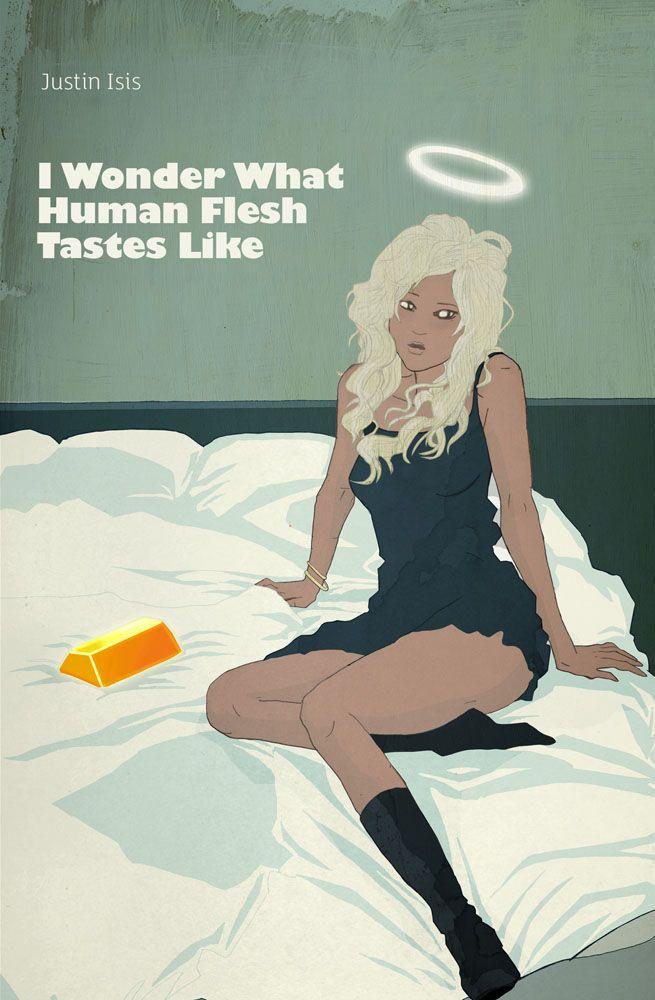 Work has been asserted by him in accordance with the

Published in January 2011 by Chômu Press.

by arrangement with the author.

All rights reserved by the author.

Design and layout by: Bigeyebrow, Justin Isis and Chômu Press

“
If you ever wanted to experience some life-bending obsession but thus far are still waiting for one to come along, reading
I Wonder What Human Flesh Tastes Like
will serve as the next best thing. In his disarmingly masterful first collection of stories, Justin Isis reports on what it is like to be young, Japanese (quite incidentally in our global culture), and hopelessly a slave to awful and bizarre attractions—eccentric enchantments that any fugitive from the conventional world would take agonizing pride in confessing to a sheaf of private papers.”

“
Justin Isis’ stories read like future videos, in their shape-shifting, voyeuristic Eurasian themes, dominated throughout by the obsessive retrieval of visual detail pulled right from the edge of one space-time dissolving into another. …the author’s ability to live parallel to what he is seeing … gives the collection an elusive, fetishistic concentration… I love these stories for their fractionally off-world message that is always vitally, sexily modern.”

“
Justin Isis is a genius and an inspiration. I've said so before; and I'll say it again.”

4. The Garden of Sleep

6. The Quest for Chinese People

7. A Design for Life

9. The Eye of the Living Is No Warmth

10. A Thread from Heaven

Other people no doubt have similar mantras to this partial one above, which is mine. It is a kind of catalogue of star-names, each embedded in the firmament of the personal imagination. ‘Stars’ is a conventional way of thinking of such entities, but I would like to consider them for a moment as a special kind of soap bubble. That is, although these entities might be related to each other, it is not necessary for them to be related to exist in the same sky, and appear to be part of the same shimmering cloud. What matters about each soap bubble is not so much its relation to the world or other worlds, as the world of visionary fertility that it contains. Each bubble is a
sui generis
globe of phantasmal possibilities, though these magic-lantern possibilities appear to us as iridescent reflections of the outer world.

I said the mantra with which I began was partial; one name missing from it is that of Justin Isis.

The first Justin Isis story that I read was ‘Nanako’ (included in this volume). I do not remember what my expectations were, but the opening line told me that the author had already arrived as a writer even though, apparently, the world had not yet noticed. I read that line and was intrigued by the sense of imaginative riches waiting to be discovered:

When he was a young man he’d known a girl called Nanako who reminded him of a Buddha.

The truth is, I was relieved. I am sometimes sent stories by unpublished writers, and more often than not, the author is still struggling with the most basic elements of writing prose. In such cases, it would be fatuous simply to praise, and I do not like dishonesty in critiques, but I am also aware how sensitive aspiring writers can be and have no wish to discourage them. Therefore giving feedback on such works can be a difficult duty.

After reading ‘Nanako’, there was no such difficult duty. Reading it, I had the peculiar sensation of disbelief. How was it that this story was not already published and well known? I could not believe how good it was, and sometimes I still cannot believe it, though when I re-read Justin’s work my initial judgement is always confirmed.

I wonder why it should be hard to believe that unpublished writing is good. It takes only a moment’s thought to realise such an attitude is absurd, and yet it is very common and, in some people, very stubborn. There must be hierarchies of authority involved.

Anyway, my subsequent correspondence with Justin and my reading of his work has made me excited about writing again and has reinvigorated my own work. If I may allow myself the vanity of talking about my own writing for a moment, I would not be surprised if any interested person noted an Isis influence in my writing from the year 2007. And if I know any person who is the future of writing, it is Justin Isis.

He is a writer of ideas — vibrant, counterintuitive and compelling ideas. For instance, this is a sample of some conversation between the two main characters in ‘A Thread from Heaven’:

—
What’s your interpretation of Christ driving the demons into the Gadarene swine?

—
Because they were different.

Park sat up on the bed.

—
No, they weren’t different. He was the same thing, something from outside. When he saw the demons, he started getting self-conscious, because they reminded him of himself. There’s no such thing as possession, the demons weren’t ‘inside’ the man — the possessed man and the demons were the same thing at the same time. Christ and the demons both had the same gimmick, except Christ was the better actor. There’s nothing a good actor hates more than seeing a bad actor ruin a role he’s played well.

As unstudied — even throwaway — as his ideas can seem, they are never one-dimensional or flimsy. Justin is a writer who redefines language and invents his own vocabulary, both systematically and as a by-product of his natural creative process. “Nerve”, “dignity” (as a non-existent quality), and “hoax” are all words that take on new significance in the context of Justin’s work.

Justin’s ideas never need to be disguised and inflated by pompous verbiage, as is the case with so many intellectuals and academics. In plain language they are sharp enough not to blunt, sophisticated enough not to pall, witty enough to need no affectation, strange enough not to be overlooked. Perhaps my disbelief has sometimes come from this fact — Justin gives ideas and writing of substance without having to resort to any of the usual disguises of legitimacy and authority. I have come to expect from this world — from the purveyors of ideas and writing — the very opposite, that is, disguises without substance.

In his fiction itself, what the above translates into is inventiveness of subject matter and style mixed with philosophical and atmospheric subtlety. Stories stark in concept and prose manage to suggest — more, to
create
— mystery through the odd angles at which those concepts are arranged, and the peculiar twists in them. Justin’s stories give this impression not accidentally, or as a side-effect, but because there is fundamental to them something very like a mystical vision. I am tempted to call it ‘Gnostic’, but this would be inappropriate. The mysticism of these stories, if I may call it such, is not ethereal. It is sinewy and embodied, involved with and shifting between specifics.

To give an example, ‘The Quest for Chinese People’ resembles the work of Borges in the way it takes a left-field concept, places it centre-stage, and forces one’s brain to adjust, thereby changing one’s perception of the world forever. What could be a vague mystical idea is firmly situated by making use of the specific concept of ‘Chineseness’. What’s more, this is not even the whimsy it might first seem; there is real logic here. One is left wondering why one never thought of the idea before. It is a
definitive
story, one which seems always to have been there, but which is endlessly new in its fascination.

Justin’s concepts are as playful as those of Borges, but not as intellectually mechanical (I mean that with no disrespect to Borges). I am reminded of William Burroughs recounting an anecdote of two Japanese swordsmen. They both strike at each other and step back. One says to the other, “You missed.” The other replies, “You think I’ve missed? Try nodding your head in a hundred years’ time.” The mechanical workings of the concept may not appear on the surface in Justin’s fiction, but everything is implied in the angle of the sword stroke. And I can’t help thinking that, in a hundred years’ time, people will be nodding (their severed heads off) at how accurate the angle of the stroke is here.

‘
The Quest for Chinese People’, I have said, is in some ways akin to Borges. Perhaps the story could be called absurdist fantasy (Justin’s work seems to attain an air of absurdity through sheer inventiveness), or maybe even science fiction in a very loose sense. Others might call it surrealism. But it shares its fundamental spirit and attitude with other stories in this collection — ‘The Eye of the Living Is No Warmth’ and ‘A Thread from Heaven’, for instance — that many readers would probably consider simply realistic.

What is this underlying spirit?

In fact, I am hard-pressed to give it any kind of name, and I feel that is how it should be. But I can — gropingly and provisionally — attempt a description. Perhaps there is a key to be found in these lines from ‘A Thread from Heaven’, in which Park is trying to explain to his friend Tomo the nature of mind:

—
Artists are also wind-up toys that have been set in motion. If they weren’t artists, they’d be politicians or comedians or something else. The shape of the mind determines the role. Everyone is given a role at birth and that role is their mind.

The Islanders by Katherine Applegate
I Will Breathe (Forbidden Book 1) by Puckett, Regina
Second Shot by Zoe Sharp
The Mask of the Enchantress by Victoria Holt
Possessions by Judith Michael
Strictly Yours: Hooded Pleasures, Book 3 by Sheryl Nantus
The Collected Stories of Lorrie Moore by Lorrie Moore
Valentine's Rising by E.E. Knight
Projected Pleasure by Jennifer Salaiz
Villainous by Matthew Cody
Our partner