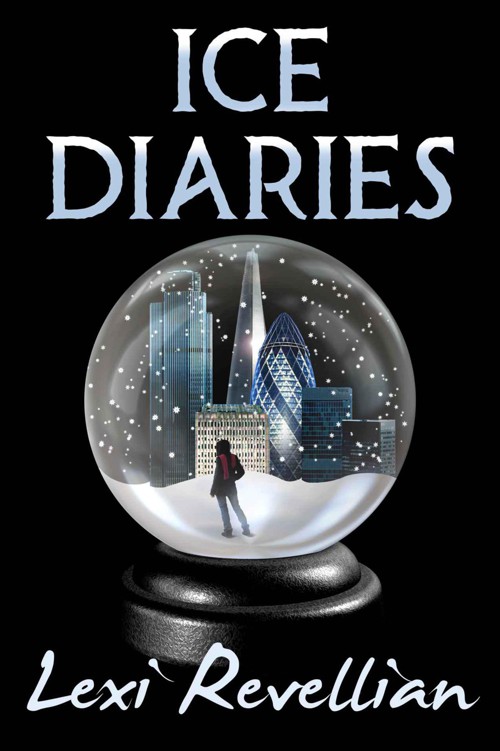 While the places in this book are a
mixture of real and imagined, the characters and events are
fictitious.

5 Solar tulips and a Tardis

23 The problem with guns…

24 Trip to the chemist

27 Biscuit under the sofa

Morgan put one foot in front of the
other, the snow crunching beneath his boots. One step at a time and
he’d get there. A full moon shone blue and white on the
undulating surface. Less than a mile away, City of London skyscrapers
emerged from twenty metres of snow like the tombstones of a dead
civilization. From a few of the nearer buildings thin smoke trailed
through the clean air towards myriad stars glittering coldly above.
He did not notice the beauty of the night; he had other
preoccupations. Unless he reached the source of one of those wisps of
smoke he would die.

Not far now, he could make it. The gash
on his ribs gaped with every gasping breath, blood seeping. He
battled pain, cold, thirst and exhaustion as if they were a tough
opponent in the cage; keep fighting however much punishment you take,
don’t admit the possibility of tapping out.

The weight of his backpack dragged him
down. Its contents were no good to him any more. He shrugged the
thing off and let it thump to the ground without a backward glance,
staggered on for fifty metres then fell to his knees and began to
crawl.

Today no snow fell, the first time for
months, and the sun shone in a brilliant blue sky. With luck there’ll
be icicles, so much easier to melt than snow. Greg called, as he does
most days, doing his rounds. He banged on the window, slid open the
patio door and came in. I gave him a Mars bar. I once joked he runs a
protection racket – we all got into the habit of giving him
stuff when he arrived, because he seemed so helpless – and he
took up the idea, though he interprets it his own way. He likes to
think he protects us, checking up on our small community each day,
carrying messages and doing a bit of trading. He put his bag on the
kitchen counter and his gloves to warm over my wood-burning stove
while he ate the Mars bar. The snow melted off his boots and pooled
on the stone-effect tiles. I peered into the open top of his bag.

“What’s that you’ve
got there, Greg?” He took out an A4 notebook, black with a
scarlet spine, and handed it to me. I opened it. Crisp off-white
pages, with faint blue lines and a margin at the top. I had a sudden
fancy to start a diary. I made him an offer. “A tin of
sardines?”

Greg concentrated, his big moon face
serious. He’s got the hang of bartering now, and enjoys it.
“It’s new almost, nothing written in it. There was only
some numbers on the first page, and I tore them out. You’d
never know. Two tins?”

“Hey, what about the Mars bar?”

“Okay. One tin of sardines and a
bar of soap. Imperial Leather.” I’d come across eight
bars the week before when I was working on my own, a lucky find.

“Time you had a wash, Greg,
you’re beginning to hum. Come round this evening and I’ll
heat you up some water. I’ll lend you a towel. Can’t say
fairer than that.”

I fetched the sardines and soap and
gave them to him. He held out his hand and we shook on the deal, in
Greg’s view an essential part of the transaction. He turned to
go, then thought of something.

“Paul says can you come over,
because he thinks the baby’s nearly coming.”

Paul and Claire live not far from my
place, in Shakespeare Tower in the Barbican, though in a blizzard it
can take half an hour to get there from my flat. Bézier, where
I live, is a lavish new block with a bulging glass façade like
two half barrels, erstwhile home to rich City bankers. It overlooks
Old Street roundabout – not that the roundabout is visible any
more – but my flat is on the opposite side, facing south
towards the City. The snow is so deep you can’t see the street
layouts, just the tops of the taller buildings, virtually all modern
architecture. Most Victorian buildings are covered, apart from the
odd church steeple or decorative tower (near me is a guy standing on
a globe shading his eyes – he looks rather surprised). St
Leonard’s lightning conductor sticks up, with a bit of the
spire below, the sort of feature that would make travelling on a
sledge with a windkite hazardous. If I had a sledge … Even the
tallest trees are buried now. You can see clusters of City
skyscrapers and cranes in the distance, and to the south east as far
as Canary Wharf where the light no longer pulses to warn off
aircraft. There are no aircraft. The London Eye is silhouetted on the
horizon to the south west like the wheel of a giant’s bike;
turn to the west, and the BT Tower looms, a high-tech totem pole.

Smoke trails rising from our fires are
visible in the clear air. Similar threads in the far distance show we
are not the only little group surviving in London. Sometimes I climb
to the rooftop of Bézier and stare out at them, wondering who
they are and how they are managing. Pretty much like us, I suppose.
Snow laps the bottom of the balcony that runs outside my flat (I’m
on the tenth floor) and I worry that next year I’ll have to
move all my supplies to a higher apartment, which would be a lot of
work, though the others would help.

I set off through the white landscape,
so bright in the sunlight I put on my dark glasses. Complete silence;
no birds, no cars, no people. Just the sound of my boots and the
squeak of the snow. Perhaps I can persuade everyone we should target
a sports shop and get us all pairs of cross-country skis …

I dropped on to the terrace on the
ninth floor, went down the emergency stairs and up three flights.
Unlike the rest of us, Paul and Claire made the decision to pick a
flat well above the snow, on the assumption the level was likely to
rise. This means a lot more lugging of stores and firewood on a daily
basis; I think it’s easier to move up a storey when you have
to. I can’t lock my flat, but this no longer matters. I knocked
on their door. Paul let me in, looking harassed. The room felt hot
after the cold outside and I hastened to take my coat off. The flats
don’t have fireplaces any more than mine does, but Paul’s
fixed up a Victorian range with the flue going out through a hole in
the wall. He made the hole painstakingly with a cold chisel and
hammer. He’s an architect, but not good with his hands. As a
group, we’re over-educated and lacking practical skills, which
matters more than it used to. Gemma stood behind him and smiled up at
me, looking a little lost.

“Hi Gemma.” I got out a toy
pony I’d been saving for this occasion and held it towards her.
She let go of her father and took it. “This is for your
collection.”

“What do you say, Gemma?”
Paul said automatically.

“Good girl. You go and play with
it in the living room.” He led me towards the bedroom. “Thanks
for coming.”

“When did it start?”

“Her waters broke last night, but
nothing much happened till this morning.”

As soon as Claire got pregnant, Paul
brought home all the books he could find in the Barbican library on
pregnancy and childbirth, and has been reading up on the subject. I’m
not sure this has helped. He now knows in great detail every possible
thing that can go wrong. Armed only with a St John’s Ambulance
course he took six years ago, he’s not equipped to cope if they
do. Now I was there to sit with Claire he went off to make a cup of
tea.

An elderly stove made the bedroom smell
of paraffin. Claire was sitting up in bed, pale, her hair clinging
damply to her forehead. She wore a thick sweater over a nightdress,
socks and legwarmers. For a moment she looked pleased to see me, then
she shut her eyes, her face scrunched up and a moan escaped her
gritted teeth. She inhaled deeply and breathed out through her mouth.
I sat by the bed, trying to look relaxed and confident. A positive
attitude was all I had to offer. I know nothing about childbirth. I
had chicken pox when my school showed the mother-giving-birth video;
afterwards my friends told me about it in gruesome detail and I was
quite relieved to have missed it. The sum total of my knowledge
picked up elsewhere was:

● You have to push but only when
you get the urge

● If you can’t get to
hospital in time, you should sit up with your back against something
and your legs apart

● It’s important to get all
the afterbirth out

And I know there are breathing
techniques which allegedly lessen the pain. Claire has been doing
breathing exercises religiously for months with the help of a book
Paul gave her. I’m sceptical about this except as a
distraction, because if it worked then they’d tell you to
breathe to combat the pain of a headache or a broken bone, and they
don’t. If you have a headache or broken bone, you take aspirin,
paracetamol or morphine because unlike breathing, they actually work.
But I kept this opinion to myself.

“How are you feeling?”

She grasped my hand, her eyes wide.
“Don’t ever have a child, Tori, it’s terrible.”

“Chance would be a fine thing.
Fond though I am of Greg, he’s not quite –”

Understandably in the circumstances,
Claire interrupted my comment about the desert that is my love life.
“I didn’t realize, last time they gave me an epidural.
What was I thinking? I must have been crazy. I thought a brother or
sister would be nice for Gemma …”

I patted her hand. “So it will.
It’ll be over in a few hours, then you’ll have a new baby
and you’ll forget all about it. Probably decide to have six
more.”

“Paul wanted to get Nina here.
Can you imagine? I told him over my dead body.”

“Oh my God. Well, that’s
something to be cheerful about.”

Nina is okay I suppose, but she has a
view on every topic and expects you to agree. If you don’t, she
assumes you haven’t understood her, and explains all over
again, more slowly and in greater detail. Sometimes I want to brain
her with a brick. I was really pleased when a bad back stopped her
coming on our group forages, because without her, dividing the spoil
takes no time at all, and it used to take the best part of an hour
with Nina present being nitpicky. She’s the last person in the
world you’d want to split a restaurant bill with – if
there still were any restaurants. Me and the guys, Paul, Greg and
Archie, have a swings and roundabouts approach to share-outs. So do
Charlie and Sam.

Claire began another contraction. I
glanced at my watch and wondered if I should time them – was it
a good sign when they got more frequent? The pain must have been
worse because she yelled. Afterwards I wiped her face with a flannel
from the bedside table, feeling inadequate.