Read Iconoclast: A Neuroscientist Reveals How to Think Differently Online

Iconoclast: A Neuroscientist Reveals How to Think Differently 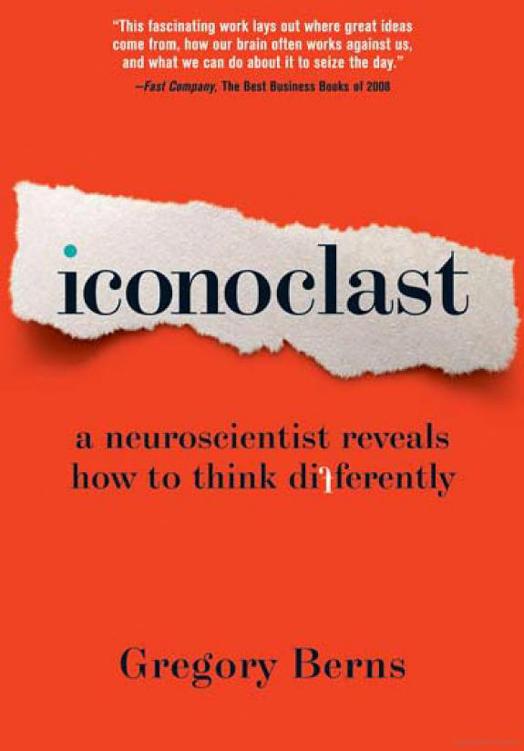 No part of this publication may be reproduced, stored in or introduced into a retrieval system, or transmitted, in any form, or by any means (electronic, mechanical, photocopying, recording, or otherwise), without the prior permission of the publisher. Requests for permission should be directed to [email protected], or mailed to Permissions, Harvard Business School Publishing, 60 Harvard Way, Boston, Massachusetts 02163.

For Helen and Madeline.

Nobody can tell you what can’t be done.

Doing What Can’t Be Done

J
ANUARY 31, 1954, WAS TO
be a special day for Howard Armstrong. It marked the fortieth anniversary of sharing the results of his first great invention with his longtime friend, and president of RCA, David Sarnoff. More than any other person, Armstrong was responsible for the three basic technologies that make radio and television possible. In addition to his first discovery, called
regeneration
, which is the technique that allows radio signals to be amplified, Armstrong invented the
superheterodyne receiver
, which transforms high-frequency radio waves into audible sound waves. But his crowning achievement, and his ultimate undoing, was the creation of FM radio—a technology that the entire radio industry had dismissed as inferior.
1

Although Armstrong and Sarnoff had once been close friends, their relationship had turned acrimonious through years of fighting over patent rights. The legal battles took a steep emotional and financial toll on Armstrong. Since he was never one to accept the opinions of the majority, his colleagues were therefore puzzled when Armstrong
removed the air conditioner from the window of his thirteenth-floor apartment overlooking the East River and stepped into the freezing wind of that bleak January night. Edwin Howard Armstrong, the most iconoclastic and influential engineer of radio technology, died as he had lived his life: iconoclastically and, ultimately, alone.

Much of what Armstrong did ran counter to accepted wisdom. Armstrong thumbed his nose at authority, taking nothing for granted except what he could see with his own eyes. As he liked to say, “It’s the things people know, that ain’t so.”
2
Ultimately, he was proved right. His invention of FM radio exemplified the benefits of the rugged individualist who shatters dogmatic thinking. And his suicide underscored the costs. But rather than deal with vague ideas of innovation or psychological constructs like nonconformity or personality traits, I will take an unorthodox view of iconoclasts like Armstrong. In this book, I will dig into the biological basis for iconoclastic thinking—the brain—and how this bit of biology sabotages creative thinking for most ordinary people.

Ever since Guglielmo Marconi had unveiled his wireless telegraph in 1896, the basic technology of radio used amplitude modulation (AM). AM’s main advantage was simplicity. Take a radio wave oscillating at a high frequency and change—modulate—it by whatever signal you wish to transmit. AM works quite well as long as the modulating signal is much lower in frequency than the carrier wave. In fact, it worked so well that the radio industry mushroomed around the idea of bringing broadcasts into people’s homes. Having installed the first transmitter on the Empire State Building when it was completed in 1931, RCA was at the vanguard of this industry. But anyone who has listened to AM radio knows its limitations. It is noisy; stations interfere with each other; and it is low fidelity.

All this was well known in the 1930s. Radio engineers had discussed the possibility of a different technology based on frequency modulation (FM), but a prominent mathematician who worked for AT&T published a mathematical proof of why FM would be no better than AM radio. The
proof was accepted wholesale by virtually every radio engineer. Except Armstrong.

Armstrong had a particular disdain for egghead types who made pronouncements by mathematical chicanery. Armstrong took these theoretical conclusions as a challenge to show not only that the legions of radio engineers were wrong but that he could create something superior. The technical challenges to create an FM receiver were formidable. It took Armstrong nearly eight years to solve the fundamental problem. But by 1934, when he demonstrated it to Sarnoff, the results were startling. For the first time ever, transmitting between RCA’s antenna on the Empire State Building and a receiver on Long Island, they could hear with clarity the sounds of someone pouring a glass of water or crumpling a piece of paper. Music was as clear as if you were sitting in a concert hall. Gone was the hiss of AM. In its place was high fidelity.

Sarnoff, as president of RCA, was heavily invested in AM technology. He reacted as would anyone who had to protect the status quo. Perhaps out of fear, but certainly out of necessity, Sarnoff put his best engineers on the problem of discrediting the superiority of his friend’s discovery. The strategy worked for a while. He forced Armstrong to remove his transmitter from the Empire State Building. But Armstrong was tenacious. He countered by building his own transmitter across the Hudson River in New Jersey. Compared with RCA’s, Armstrong’s transmitter was tiny, but the fact that he could broadcast with such high fidelity with low power only made his case for FM stronger. Although Armstrong did eventually license FM technology to General Electric and AT&T, RCA held out, refusing to make deals on the same terms as the others. In the end, Armstrong’s widow settled with RCA for $1 million—the same amount RCA had offered Armstrong a year before his death.

Armstrong’s story is a cautionary tale. He invented so many of the basic technologies that ushered in the age of communication that it is hard to imagine what the world would have looked like without them. Armstrong’s insights occurred at pivotal points in history. His invention
of regeneration and the superheterodyne receiver played key roles in both World Wars. But what is most interesting about Armstrong is the extent of his iconoclasm. His extreme iconoclasm, which ultimately advanced radio technology but cost him his life, can be understood by differences in the way his brain functioned.

The Brain, Neuroeconomics, and the Science of Iconoclasm

You may wonder what the brain has to do with iconoclasts. Indeed, until a few years ago, I really wouldn’t have given any thought to an iconoclastic brain either. As a neuroscientist, I had spent the last decade studying which parts of the human brain responded to reward and were responsible for motivation. During this period of time, a revolution had occurred in the way that scientists thought about the biological basis of reward and pleasure. This revolution swept away the idea that there was a pleasure center in the brain that somehow acted as an accelerator to the engine of human behavior. The picture of reward and motivation that emerged from this revolution was a sophisticated mix of computational algorithms and pharmacology. It was a picture in which chemicals like dopamine shuttled between neurons in ways that looked remarkably like the calculations that modern robots perform. And unlike in the antiquated, Freudian notion of the id driving human behavior, we now know that the decisions that humans make can be traced to the firing patterns of neurons in specific parts of the brain. These discoveries gave birth to the field known as
neuroeconomics
.

Running a research laboratory to make these discoveries, however, is a job unto itself. Many labs, like mine, are housed within universities and academic medical centers, but they operate like a business. Funds go in, and knowledge and discovery come out. Since I am the director of such a laboratory, the things I do look very much like what a CEO of a small business does. On a day-to-day level, decisions must be made
about how to direct resources and personnel within budgetary constraints. My lab, which is considered modest in size by academic standards, has an annual operating budget of about $1 million. As the head of this operation, I am responsible for growing the business by finding new sources of funding to remain productive.

The laboratory’s primary function, of course, is research and development. We have tangible measures of success in the form of publications, and sometimes patents and licensing deals. In the biomedical field, the value of publications is easily gauged by the impact factor of the journal that they are published in. The impact factor measures how many times articles in a particular journal are cited by other people. It is extremely competitive to publish in high-impact journals, but the rewards for doing so are great: promotions, publicity, and more funding. It is a classic trade-off of risk and reward. Risky because so few papers get published in the best journals. Consequently, one of the critical decisions a laboratory head makes is how to allocate resources between high-risk, potentially high-impact projects, and low-risk, low-payoff ones.

Unlike other types of business, however, the business of running a research laboratory is continually driven by the tenuous dance between advancing science within existing frameworks of thought and the headline-grabbing paradigm shifts that all scientists dream about. Every young PhD student fantasizes about winning the Nobel Prize someday—the crown jewel of paradigm-shifting, iconoclastic thinking. Science can be as competitive, and cutthroat, as any business endeavor. In addition to the constraint of resource allocation, the laboratory head must make strategic decisions about whom to collaborate with and when to bring products (discoveries) to market (i.e., publish them). And so, it was within this type of environment that I began to realize that the very thing I was studying, the human brain, also contained the secrets to success in an environment that demanded innovation and being able to do things differently than competitors.

To be clear, I will operationalize the definition of an
iconoclast
as a person who does something that others say can’t be done. This definition implies that iconoclasts are different from other people. Indeed, this is true, but more precisely, the iconoclast’s brain is different, and it is different in three distinct ways. Each of these three functions maps onto a different circuit in the brain, which will be dissected in short order. For now, it suffices to know that the iconoclastic brain differs in these three functions and the circuits that implement them:

Tears in Rain by Rosa Montero, Lilit Zekulin Thwaites
Shots on Goal by Rich Wallace
Caroselli's Baby Chase by Michelle Celmer
What He Craves by Tawny Taylor
Mother, Please! by Brenda Novak, Jill Shalvis, Alison Kent
Then She Fled Me by Sara Seale
The No-Cry Separation Anxiety Solution: Gentle Ways to Make Good-bye Easy from Six Months to Six Years by Elizabeth Pantley
Clarity by Lost, Loretta
Love Amid the Ashes by Mesu Andrews
Being Human by Patricia Lynne
Our partner