Read I'd Rather Be Single 2 Online

I'd Rather Be Single 2 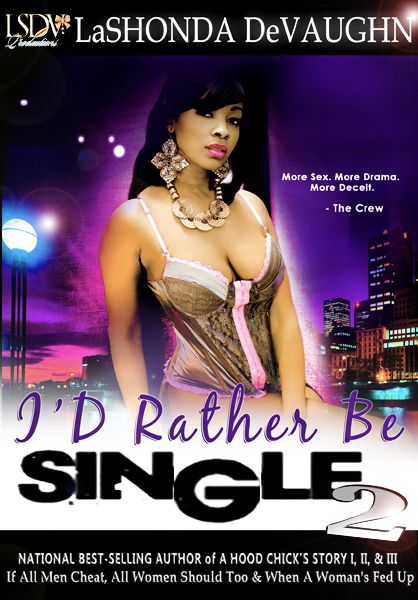 Names, characters, businesses, organizations, places, events and incidents are the product of the author’s imagination or are used fictionally.

Any resemblance of actual persons, living or dead, events or locales are coincidental.

All rights reserved. No part of this book may be reproduced without written permission from the publisher, except by a reviewer who may quote brief passages in a review to be printed in a newspaper or magazine.

GOD I just simply want to say, THANK YOU. Without you I am nothing and I’m truly thankful and grateful for everything that you’ve been doing for me. To my beautiful babies Shy and Dre, thank you for being my inspiration, you both help keep me motivated and I love you both with all of me. To my Angel, my baby brother Andre, we did it again bro. As long as I’m alive, your name will live on, I promise. Special thanks to my mom and big brother Darryl, I’m so thankful for the tight bond that we share, thanks for having my back. No matter what we go through, we know we are all we got and nothing will tear us apart.

I would like to give a huge shout out to the ladies that worked on I’d Rather Be Single pt 1 with me: Mimi Renee, Kaie Golson and Tysha. In the Urban Fiction world, there’s always talk about how anthologies are the least likely to sell and y’all all know how I like a challenge ;). With the help of you ladies, WE PROVED THEM WRONG! “I’d Rather Be Single” stayed on the AA Best Selling Charts for almost a year straight and also killed them on the Barnes & Noble charts!! Thanks to you ladies, we did the damn thing and I truly thank y’all for contributing your talent. With that being said, I have to thank the people who made it all possible, OUR READERS!! Man, when I say y’all ride for ya girl, it’s an understatement!! Thank you for spreading the word, for the emails, tweets, fb notes, everything! I may not be able to get to everyone timely but I try to make sure that I stay communicating with y’all because you are responsible for helping to build my brand. LSDV Productions wouldn’t even exist without you all so, THANK YOU, I adore you all! To everyone on the LSDV team, my editors, designers, marketers, typesetters, photographers, etc., thank you for all of your hard work.

As always, I promise to keep them coming!

Ring the Alarm, I been doing this too
long and I'll be damned if I see another bitch on your arm! Beyonce said it best, I been in this game too long, I taught Tyra the game and now this bitch tries to use what I taught her to take Michael Slinks away from me? NOPE this bitch got the game wrong, NO ONE takes anyone or anything that’s MINE…it's ON! – Rosslyn

“Huuuuuuuu!!!” Rosslyn’s eyes were closed as she took in a deep breath of freedom after exiting the steel doors of the mental institution. The four-month stint had made her feel like she had lost touch with reality. Her ponytail was disheveled, no make-up covered her minor blemishes, no fake lashes or lip-gloss adorned her pretty yellow face. The glam girl who prided herself on her photo-shoot fresh appearance, looked like a regular around the way girl. The outfit she sported was the same outfit that she’d worn when she was taken away; blue skinny leg jeans and a white baby doll wife beater. She peered around at the busy street and cracked a half smile. She was excited to be back in society.

She strolled down the street
, growing uneasy about where to begin repairing her life. She had no idea how to pick up the pieces from where she left off four months ago. There was no contact with Terry Lamont, the basketball player who had been funding her fabulous lifestyle; actually, there was no contact with anyone. She was unsure if Terry even knew where she had disappeared to, but she hoped that she could effortlessly jump back into her old life.

She flagged down a cab
, and her first destination was Terry Lamont’s crib. She had to see if shit was still sweet with their relationship. Though Rosslyn had her own money saved, rich men were her income, so she had to find out if she was still employed.

The driver arrived at Terry Lamont’s beautiful home and announced the
total to Rosslyn. She threw the money at the taxi driver, lugged her small bag out of the car, and proceeded to Terry’s front door.

She
licked her hands and patted down all the fly-aways from the top of her ponytail, and then took out her keys. She stuck the chiseled key into the door of the six bedroom brick style mansion, and realized that the locks had been changed. She wiggled and maneuvered her key in the lock, to no avail.

“Terry! Open the door
, baby, it’s me!” she shouted between knocks. “I see your car out here, so I know you’re inside. Open up!”

Finally
, Terry approached the door and cracked it open.

Shocked by her presence
, he asked, “Rosslyn?” He almost choked on her name. It was like he had seen a ghost. He couldn’t believe that the woman who had abandoned him four months ago, had the nerve to show up at his front door. “What are you doing here? Better yet, where the fuck you been?”

Rosslyn
scratched the back of her head and quickly gathered a lie. “My aunt was sick, I had to drop everything and go to New York.”

She searched his
face, hoping to find some belief in his expression, but it hadn’t changed. His foot remained in the door, and he still didn’t let her in.

Suddenly
, a presence crept behind him.

A
tall slender female, resembling Sanaa Lathan walked to the door. “Who is it baby?” she asked, tightening her white robe.

Immediately
, Rosslyn’s anger grew from one to ten.

“
What? Who the fuck is that?” Rosslyn pointed fiercely into the pretty girl’s face.

Terry struggled to keep t
he door cracked, because Rosslyn was now forcing her way inside, screaming and hollering.

“
Really Terry? Four months go by and you replace me with this seat filler? Who is this bitch?” she shouted!

“Excuse you?
” The Sanaa Lathan look-alike screeched from behind Terry, wishing that he would move out the way so that she could get to Rosslyn.

“Baby
, go back to bed.” Terry instructed her. The confused girl rolled her eyes and obeyed Terry.

Rosslyn’s
eyes widened. “Oh, she’s your baby?” she shouted. “I was only gone for four months and you replaced me just like that?” She snapped her fingers.

“You dam
n right!” he pitched. He was becoming angrier by the second. “You disappear for four months, I called your ass every day for three weeks straight. I paid rent on a spot that no one occupied. What the fuck did you expect me to do? I almost thought you died or got kidnapped or some shit. What was I supposed to think?”

“I’m sorry.
I had to take care of my family.” she said, trying to force her lie as her eyes welled up.

“Well
, I don’t know what to tell you, Rosslyn. It’s over, I’ve moved on.” His shoulders were hunched and he held a straight face.

Terry stepped out of the house and closed the door behind him.
He spoke with his hands, and the muscles in his arms visibly tensed up as he let Rosslyn know it wasn’t happening. “Look Rosslyn, stop it, okay? It’s too late. I’m involved with someone now, it’s over! You’re gonna have to leave.”

“But I love you.”
Her face was full of tears and she tried to force a hug.

Terry
wrestled her arms down to her sides. “You gotta go, okay? Too much time has gone by. I wish you the best.”

He stepped back
inside, glanced into her face one last time and locked the door behind him.

“Terr
yyyyy! Terry!” she cried loudly. Rosslyn cried so hard it felt like her chest was caving in. The rejection stung her in the core of her pride. “You can’t leave me, you CAN’T leave me, Terryyy!!! No one leaves me!!” She kicked the door and continued to scream his name, crying her eyes out until she felt defeated.

After exhausting herself,
she blankly stared at the door, realizing that he wasn’t coming back out to reconcile their relationship, and that he indeed meant what he told her. It was over. Rosslyn’s adrenaline was still pumping; her heartbeat was almost visible through her shirt. There was no way she could sit with the fact that she lost Terry to another woman.

Suddenly
, her anger took over, allowing revenge to consume her, mind, body and soul. She decided that she was not leaving the premises until she felt like she had gotten revenge. But not on Terry, she wanted revenge on this other woman who took him away from her.

Deceive (Declan Reede: The Untold Story #2) by Michelle Irwin
Her Desert Knight by Jennifer Lewis
Blaze (Halloween's Forbidden Lust) by Stark, Alexia
Smoke and Mirrors by Ella Skye
Blitzed by the Brit: A Secret Baby Sports Romance by Jessica Ashe
Keepers of the Labyrinth by Erin E. Moulton
Branded by Fire by Nalini Singh
A Plague of Lies by Judith Rock
Gravity by Scot Gardner
The Dream Vessel by Jeff Bredenberg
Our partner