Read If Dying Was All Online

If Dying Was All 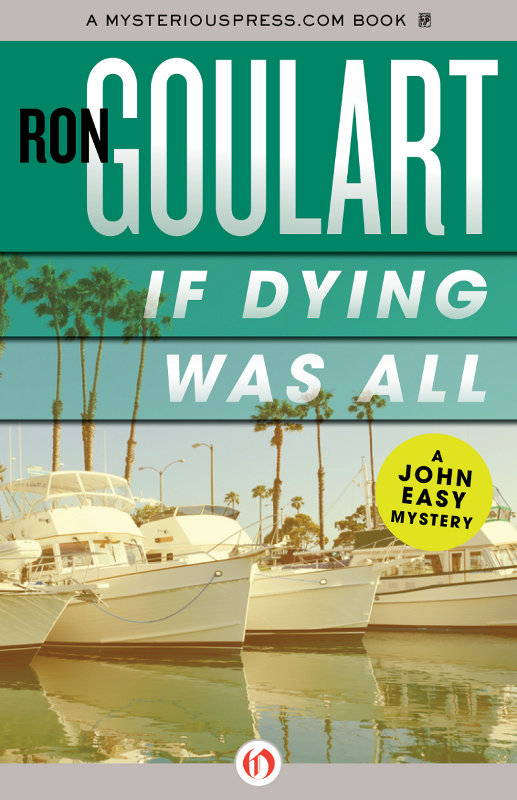 If Dying Was All
A John Easy Mystery
Ron Goulart

T
HE TALL, NAKED GIRL
held up the portable typewriter at arm’s length, gripping the case handle with long tan fingers, and asked, “How about this?”

John Easy sat up in bed, wide awake at once, and automatically reached his hand into his bare armpit. He shook his head once, yawned and coughed at the same time, frowned up at the long, slender, auburn-haired girl. “Very good, Marina,” he said. “Keep lifting bigger and bigger objects everyday and by Christmas you can pick up the refrigerator.”

“No. I mean as something to salvage.” Marina Harley set the pale green typewriter case down on one of the round straw mats circling the low bed. She bent from the waist, knees unbending, and her tan breasts slapped gently together.

Easy watched her. He was a tall wide-shouldered man, two years over thirty, dark and knocked-about looking. His hair was a mahogany brown, short cropped and yet shaggy. He reached over to the barrel-shaped night stand and got his leather-banded watch. “Salvage from what?”

“You always put your watch on first,” observed Marina, upright again. “Before anything else.”

Easy put on his wristwatch. “Salvage from what?”

“From the fire,” replied the lovely girl.

“Fire?” Easy swung out of bed and hopped over round straw mats to the balcony windows. He pulled the drapes open. Everything was still there, the pines and oaks and the one other house on Marina’s hilly road. The early morning light was yellow and faintly smoky. “Is the San Fernando fire expected to jump over here into San Ninguno Canyon?”

“No, not yet,” replied Marina. “But there’s still a possibility it might, according to the news. You can’t really predict with fires. I woke up early and I’ve been trying to decide what to save from the cottage if I have to run for it.”

In the flower garden of the house down the hill a plump old woman in a smock and straw hat waved a trowel at Easy and smiled. He closed the drapes. “Mrs. Ferguson seems used to seeing naked men up on your balcony,” said Easy.

“It’s too late in the year for tulips.”

“Well, whatever she’s digging at down there,” said the tall, pretty girl. She placed her left palm high on her bare left buttock. “Don’t start playing detective with me, John.”

Easy said, “No jokes about my profession.”

The girl twisted the ends of her long auburn hair around her right forefinger. “You’re getting class conscious now. You think you’ve got a profession and all I’ve got is a job.”

“You quit your job day before yesterday, didn’t you?”

“Now you’re being a male chauvinist,” said Marina. “You think it’s silly for a girl to go back to school for a master’s degree. You’d like to see me stay a cocktail waitress at the Tin Guru forever.”

“I thought you’ve been working at the Downhome Soul Shack.”

“The Panthers blew up the Soul Shack three weeks ago,” said the naked girl. “You’ve been too busy hiding under beds and taking poor people’s cars away from them to pay attention to me. I haven’t even seen you since Labor Day.”

“Not cars. I don’t do repo work.” Easy, scratching his pubic hair, asked, “What kind of place is the Tin Guru?”

“An eastern food automat with a cocktail lounge attached, down at the ocean end of Santa Monica Boulevard.”

“You mean you can put a quarter in and chutney comes out a slot?”

“Fifty cents,” said Marina. “But don’t start sidetracking me. I’m angry with you.”

He stepped two mats closer to the girl. “Okay. About what?”

Marina turned her slim straight back on him, kicked out angrily at a cane-backed rocker. The chair began flapping back and forth and two bald-headed Raggedy Ann dolls fell off it and landed in a bushel basket full of antique doorknobs. “Oh shit,” said the lovely girl. “I don’t remember now.” She spun around to face him, left hand still on left buttock. “I guess I’m upset and worried about going back to UCLA, John. I’m too old.”

“I’m twenty-five. My birthday was last week,” said Marina. “See, you don’t pay enough attention to me. And I’m worried about the fires in the valley and in some of the canyons and down in San Diego. I like to collect stuff, in a pretty eclectic way, and I’m fond of it all. I can’t even decide what to gather up and run with if the holocaust comes.”

“As long as you got yourself gathered up it wouldn’t matter,” Easy told her. “The holocaust isn’t likely to reach here to San Ninguno.” He was near enough to reach out and touch her, which he did.

Marina asked, “I don’t suppose you could get the anchor in your Volkswagen?”

“My marine salvage anchor, that I have down in the patio.”

“I’d like to put a couple of things in your car when you leave,” said Marina. “Plus me, to be dropped at UCLA.”

“I don’t know why you don’t get a bigger car. Or a more impressive one.”

“Because I don’t like cars.” He put his right on top of her left hand.

“I guess my whatnot won’t fit either.”

“When do you have to be back at your gumshoe works?” Both her nipples poked against his chest.

“Well, that’ll give me time to decide what I want you to put in safe keeping.” She glanced downward. “How can you get an erection when we’re probably on the brink of a holocaust?”

She frowned at him for a moment, then smiled and edged around him toward the bed.

Easy’s short, broad-shouldered, thirty-six-year-old, blonde secretary asked, “What’s that in the back seat of your car?” She was standing over the air conditioner of his private office, fiddling with a silver dial and looking out at the small gray parking lot.

“A bushel basket full of doorknobs.” Easy unbuttoned his jacket, loosened his tie and sat down behind his metal desk.

Nan Alonzo let go of the air conditioner and rubbed at her short, broad nose. “A basket of doorknobs?”

“Be thankful it’s not an anchor,” Easy said. “Why aren’t you wearing your glasses?”

“You don’t seem able to see too well.”

“Somebody in my group therapy session last night slapped me on the back and my contact lenses both popped out and we only found one,” explained his secretary. “How’s Marina?”

“Fine. Except she has the idea that the fire over in the valley is going to jump into her canyon.”

“These winds,” said the heavyset Nan. “It could. I heard on the news this morning there’s even a fire on Catalina Island, and there was a bad one on San Obito a couple weeks ago. I don’t blame Marina for worrying. Is she still working at that Arabian restaurant—what was it?—the Gourmet Commando?”

“No, she’s decided to go back to school.”

His secretary said, “That’s what Sandstone says he’d like to do.”

“I thought you were dating somebody in show business, a magician.”

“Sandstone is a magician,” said Nan. “Except he’s not the same one I was dating before. You’re thinking of the Great Nabo.”

“You have a fondness for magicians.” Easy reached a handful of messages out of his in-box.

“Yes, and I had an insight about that last night at the group therapy session. That’s why the fellow slapped me on the back, to congratulate me.”

Easy nodded, cleared his throat, hunched his wide shoulders. He began leafing through his blue memos. Each had
Easy & Associates
,
Detective Services
printed in the upper left-hand corner. “The MacQuarrie trial’s been postponed again?”

“The defense attorney had a stroke.”

“I thought he had a stroke last month.”

“That was the judge.”

Easy leaned back in his swivel chair, which squeaked once, and fanned himself with the pack of memos. “Security checks, divorces. Maybe this isn’t a profession.”

Easy did. “What’s this? ‘Frederic Clay McCleary says his daughter has come back to life.’”

“He called a half hour ago. Says his attorneys, Lumbard, Bockman, Arnold & Denny, suggested you.”

“Remind me to take Carlos Denny to lunch sometime. When is this McCleary coming in?”

“That’s right, they don’t get out much.” Easy frowned at the McCleary memo. “Wait now. Frederic McCleary the screenwriter. He won a couple Oscars twenty years ago.”

“That he did.” Nan walked around the desk and sat in the client’s chair. “He lives right up in Beverly Hills, off Sunset. Not far from us. Has an enormous 1920’s sort of pseudo-Moroccan, semi-Spanish rancho of a place, with lots of palm trees and imported foliage.”

“What about his daughter?”

“She committed suicide five years ago.”

“She just wrote her father a letter.”

T
HE BIG ROOM WAS
dark and sour. The bright yellow afternoon outside showed only as thin gold lines between the heavy drapes. Frederic McCleary sat, hunched, in the exact middle of a wide autumn-colored sofa. He was a puffy, pale man in his middle sixties, with thinning white hair and a prickly moustache. Reaching into a breast pocket of his tweed jacket, he drew out a letter. “I’ve never believed she was dead,” he said across the shadows to Easy.

Easy was deep in a morris chair, next to a grand piano with a Spanish shawl atop it. A lamp with a rearing iron horse for its base rested near the fringe end of the shawl, and next to it a partly eaten tuna sandwich on a white china plate. The sandwich was several days old. “Now you have proof she’s alive?” he asked the old screenwriter.

McCleary rested the envelope on one sharp knee and picked up his glass from the pedestal table to his right. “She wrote and asked me to come and see her.”

“When are you supposed to meet her?”

“The rendezvous date has already passed,” said the old man. He sipped at his glass of Scotch. “Jackie didn’t keep our date. We were to have met three days ago. She never showed up. I’ve had one further communication, which I’ll come to shortly. I’ve made up my mind I need some help.”

“You haven’t talked to the police?”

“I have little use for them,” replied the hunched, old man. “Besides, Jackie’s in some kind of trouble. No, a reliable private investigator is what I need. I should have hired one then, five years ago. But I went on a binge instead. A lost weekend that lasted for a year or more. After that I didn’t care about anything much for a long while.” He ran a finger along the side of his face. “The youngest of my lawyers, Carlos Denny, suggested you.”

Izzy's Fight: The Izzy Rose Chronicles Book 1 by Nicole Clark
Broken Souls by Boone, Azure
It's Alive by S.L. Carpenter
Butterflies (The Secret Casebook of Simon Feximal) by KJ Charles
Heart of the Mountain Man by William W. Johnstone
The Cabal by Hagberg, David
The Bane Chronicles 1: What Really Happened in Peru by Cassandra Clare, Sarah Rees Brennan
Wicked Bet: A Bad Boy Romance by Sophie Brooks
Crime on My Hands by George Sanders
A Joyful Break (Dreams of Plain Daughters) by Craver, Diane
Our partner