Read If He Had Been with Me Online

If He Had Been with Me

BOOK: If He Had Been with Me
3.54Mb size Format: txt, pdf, ePub
Read Book Download Book
ads 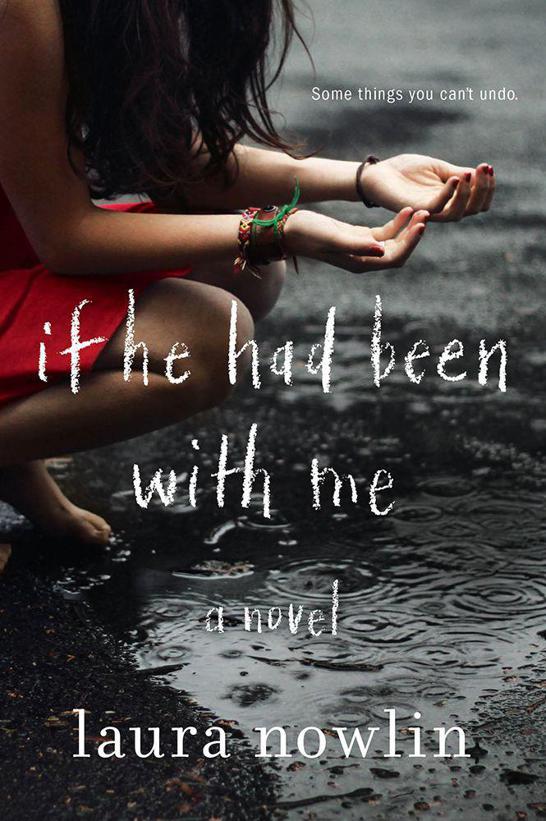 For my husband, Robert;
without you, I wouldn’t have known how to
write about true love.

I wasn’t with Finny on that August night, but my imagination has burned the scene in my mind so that it feels like a memory.

It was raining, of course, and with his girlfriend, Sylvie Whitehouse, he glided through the rain in the red car his father had given him on his sixteenth birthday. In a few weeks, Finny would be turning nineteen.

I can see it—the rain-slicked road and the flashing lights of ambulance and police cars cutting through the darkness of night, warning those passing by: catastrophe has struck here, please drive slowly. I see Sylvie sitting sideways out of the back of the policeman’s car, her feet drumming on the wet pavement as she talks. I cannot hear her, but I see Sylvie tell them the cause of the argument, and I know, I know, I know, I know. If he had been with me, everything would have been different.

I can see them in the car before the accident—the heavy rain, the world and the pavement as wet and slick as if it had been oiled down for their arrival. They glide through the night, regrettably together, and they argue. Finny is frowning. He is distracted. He is not thinking of the rain or the car or the wet road beneath it. He is thinking of this argument with Sylvie. He is thinking of the cause of the argument, and the car swerves suddenly to the right, startling him out of his thoughts. I imagine that Sylvie screams, and then he overcompensates by turning the wheel too far.

Finny is wearing his seat belt. He is blameless. It is Sylvie who is not. When the impact occurs, she sails through the windshield and out into the night, improbably, miraculously, only suffering minor cuts on her arms and face. Though true, it is hard to imagine, so hard that even I cannot achieve the image. All I can see is the moment afterward, the moment of her weightless suspension in the air, her arms flailing in slow motion, her hair, a bit bloody and now wet with rain, streaming behind her like a mermaid’s, her mouth a round O in a scream of panic, the dark wet night surrounding her in perfect silhouette.

Sylvie is suddenly on Earth again. She hits the pavement with a loud smack and is knocked unconscious.

She lies on the pavement, crumpled. Finny is untouched. He breathes heavily, and in shock and wonder, he stares out into the night. This is his moment of weightless suspension. His mind is blank. He feels nothing, he thinks nothing; he exists, perfect and unscathed. He does not even hear the rain.

Stay
. I whisper to him.
Stay
in
the
car. Stay in this moment.

But of course he never does.

Phineas Smith is Aunt Angelina’s son. Aunt Angelina is not my aunt; she is my mother’s best friend from girlhood, her best friend still—and next-door neighbor. Our mothers had been pregnant together that spring and summer long ago. My mother respectably so, married to her high-school sweetheart for over a year with numerous pictures of their wedding scattered throughout their house with a fenced-in backyard. My father was—is—never around because of his work at The Office but Mother did not mind; she had Angelina. Angelina was pregnant from her lover. He was married and rich and far too old for her. He also refused to believe that it was his child. It would take a court-ordered DNA test a few weeks after Phineas’s birth to get his father to do the honorable thing—buy Aunt Angelina the house next door to my mother, and after writing each monthly check, pretend that she and the baby did not exist for the next thirty days.

My mother did not work and Aunt Angelina taught art at Vogt Elementary across the street from her duplex, so the summer was theirs to spend. They told us that the summer of their pregnancies, Aunt Angelina would walk over from her duplex on Church Street—her stomach large and heavy, protruding, as if it were leading the way—to our large Victorian house on Elizabeth Street, and they would spend the day on the back porch with their feet propped up on the railing. They would drink lemonade or iced tea, and only go inside to watch the
I
Love
Lucy
Show
in the afternoon. They sat close together so that Finny and I could kick each other like twins.

They made such plans for us that summer.

Phineas was born first on the twenty-first of September. A week later, likely missing the one who had been kicking me, I came along.

In September people will tell you that their favorite season is autumn. They will not say this during any other month of the year. People forget September is actually a summer month. In St. Louis, this should be apparent to people. The leaves are still green on the trees and the weather is still warm, yet people hang smiling scarecrows on their front doors. By the time the leaves and weather do begin to change in late October, they have tired of autumn and are thinking of Christmas. They never stop; they never wonder if they already have it all.

My mother named me Autumn. People say to me “Oh how pretty,” and then the name seems to glide away from them, not grasping all the things that the word should mean to them, shades of red, change, and death.

Phineas understood my name before I did. My name had what his did not, associations, meaning, a history. His disappointment when our fourth grade class looked up names in the baby name books surprised me. Every book gave his name a different meaning and origin: snake, Nubian, oracle, Hebrew, Arabic, unknown. My name meant exactly what it was; there was nothing to be discovered by it. I thought if a name was of unknown origin and meaning, it could not disappoint. I did not understand then that a boy without a real father would crave an origin and a meaning.

We grew up in Ferguson, a small town in the suburbs of St. Louis, composed of Victorian houses, old brick churches, and a picturesque downtown of shops owned by families for generations. I suppose it was a happy childhood.

I was quirky and odd and I did not have any friends besides Finny. He could have had other close friends if he wanted; he was good at sports and nothing was odd about him. He was sweet and shy and everyone liked him. The girls had crushes on him. The boys picked him first in gym. The teachers called on him for the right answer.

I wanted to learn about the Salem witch trials for history. I read books under my desk during lessons and refused to eat the bottom left corner of my sandwiches. I believed platypuses to be a government conspiracy. I could not turn a cartwheel or kick, hit, or serve any sort of ball. In third grade, I announced that I was a feminist. During Job Week in fifth grade, I told the class and teacher that my career goal was to move to New York, wear black turtlenecks, and sit in coffee shops all day, thinking deep thoughts and making up stories in my head.

After a moment of surprise, Mrs. Morgansen wrote
Freelance
Writer
under my smiling Polaroid picture and tacked it on the walls with the future teachers and football stars. After consulting her, I agreed that it was close enough. I think she was pleased to have found something for me, but sometimes I wonder if she would have cared as much if I had been ugly as well as odd.

For as long as I can remember, people have told me that I am pretty. This came from adults more often than other children. They said it to me when they met me; they whispered it to each other when they thought I could not hear. It became a fact I knew about myself, like my middle name was Rose or that I was left-handed: I was pretty.

Not that it did me any good. The adults all seemed to think it did, or at least should, but in childhood my prettiness gave more pleasure to the adults than it did me.

For other children, the defining characteristic was another fact I had accepted about myself—I was
weird.

I never tried to be weird, and I hated being seen that way. It was as if I had been born without the ability to understand if the things I was about to say or do were strange, so I was trapped into constantly being myself. Being “pretty” was a poor consolation in my eyes.

Finny was loyal to me; he taunted anyone who dared torment me, snubbed anyone who scorned me, and always picked me first to be on his team.

It was understood by everyone that I belonged to Finny and that we belonged together. We were accepted an as oddity by our classmates, and most of the time they left me alone. And I was happy; I had Finny.

We were rarely ever apart. At recess I sat on the hill reading while Finny played kickball with the boys in the field below. We did every group project together. We walked home together and trick-or-treated together. We did our homework side by side at my kitchen table. With my father so often gone, The Mothers frequently had each other over for dinner. A week could easily go by with Finny and I only being separated to sleep in our own beds, and even then we went to sleep knowing the other wasn’t very far away.

In my memory of childhood, it is always summer first. I see the dancing light and green leaves. Finny and I hide under bushes or in trees. Autumn is our birthdays and walking to school together and a deepening of that golden light. He and his mother spend Christmas at our house. My father makes an appearance. His father sends a present that is both expensive and unfathomable. A chemistry set. Custom-made golf clubs. Finny shrugs and lays them aside. Winter is a blur of white and cold hands shoved in pockets. Finny rescues me when other kids throw snowballs at me. We sled or stay indoors. Spring is a painting in pale green, and I sit watching from the stands while Finny plays soccer.

All the time that became known in my mind as Before.

BOOK: If He Had Been with Me
3.54Mb size Format: txt, pdf, ePub
Read Book Download Book
ads