Read If I Forget You Online

If I Forget You 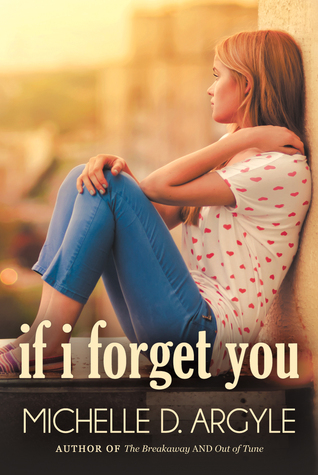 Kasie West, author of
The Distance Between Us

“Avery may have a bad memory, but I will never forget this book.”

“Achingly sweet and beautiful,
If I Forget You
captured my romantic reader heart.”

If I Forget You

All rights reserved. No part of this publication may be reproduced, stored in or introduced into a retrieval system, or transmitted, in any form, or by any means electronic, mechanical, printing, recording or otherwise, without the prior permission of the author, except for the use of brief quotations in a book review.

Summary: “When forgetful Avery Hollister heads off to college, it takes her a week to realize the guy she’s crushing on is, in fact, three different guys.”

This book is a work of fiction. Any resemblance to actual persons, living or dead, events, or locales, is entirely coincidental.

I forgot what I was going to say here

… but I know you’ll understand

Avery set down her luggage and looked around the cramped hallway of her Aunt Chloe’s house. There was old clutter everywhere, but it didn’t bother her. What bothered her were her sweaty palms. Moving away from home for the first time should be exciting, but all she felt was an almost paralyzing nervousness.
Don’t panic. I can do this
. She wiped her hands on her jeans and faced her aunt, who was grinning like a Cheshire cat.

“I hope you’re comfortable here,” Chloe chirped. “A new place can be so exciting! College is going to be wonderful for you.” She hadn’t stopped talking the entire car ride from Spokane to Seattle. Avery just wanted some peace and quiet, but she didn’t want to be rude.

“It’s great of you to let me stay here,” she replied, looking around. “I just hope I’m not going to be in the way.”

“In the way of what? I’m thrilled to have you here.” Chloe pulled out a thick bunch of papers from her purse. “Now, your mother gave me
this
. She told me you’re forgetful and I should make sure you brought everything.”

Avery cringed. “She told you? I asked her not to do that.”

“Oh, it’s nothing to be ashamed of. Everyone forgets things, don’t they?” She waved the papers in the air. The fifteen-page list was folded into a neat square. Everything about Avery’s mother was neat and clean, the total opposite of Chloe. Even though they were fraternal twins, they were nothing alike. They hardly ever talked to each other.

Avery rushed forward and snatched the papers from Chloe’s delicate hand. “Then we don’t really need to check anything, do we?” she said quickly. “Mom is overprotective. Sometimes she goes a little overboard.”

Like fifteen pages overboard … even though she had good reason.
A nervous laugh escaped Avery’s lips as she clutched the papers close.

Chloe narrowed her eyes. “That’s an understatement. I have never understood her. How have you survived under her constant control? Living here will be a breath of fresh air, won’t it?”

Avery tried to smile, but she couldn’t force her lips upward. She had no idea how she was going to get through college without her mom’s help, but she would have to do it. She
wanted
to do it. She didn’t want to check lists anymore. She could survive without that stuff.

In an effort to calm herself she studied her aunt. Chloe had wild chestnut-brown hair and sparkling green eyes set in an oval face starting to wrinkle. Her skin was olive, making her seem almost tanned. Avery’s hair wasn’t as dark as Chloe’s
—
more of a limp, mousy brown
—
and her skin a lot paler, but she had those same green eyes and oval face.

“I think I’ll miss Mom a lot,” Avery admitted. “But I’m excited for college.” This time a genuine smile spread across her face. When she had first set foot on the University of Washington campus, it had felt as if she’d found a missing piece of herself. This was where she was supposed to be. She would make it work.

Chloe beamed. “As you should be. You’ll love it here, Avery, I promise.” She wrapped an arm around Avery and led her down the hall to her new bedroom, which was connected to a private bathroom, and reminded her that since she would be living here rent-free she was responsible for keeping both clean.

Avery tried not to laugh out loud.
Clean?
This house?
Perhaps it was “clean,” but it certainly wasn’t tidy. Every corner was filled with something
—
old magazines, baskets full of glass bottles and broken seashells, a pile of fraying string. The walls were cluttered with framed black and white pictures of Chloe and some man she had never told Avery about. The house was fascinating, even if it did put Avery on edge.

Standing in the middle of her new room, she looked around. It was pristine compared to the rest of the house, and although she had stayed in it only two months earlier, it was different now. The dusty filing cabinets had been moved out and a dresser put in. There was a new rug on the hardwood floor, a pair of sunny-yellow curtains over the window that looked out on the street, and the walls were painted a pretty shade of lavender.

“Wow,” Avery breathed. “Thanks, Chloe. Mom didn’t tell you to do all this, did she?”

“Of course not. I’ve been meaning to fix up this room for years. Besides, I’m happy you decided to stay here instead of moving into one of those cramped dorms.”

Avery laughed. Poor Chloe. “Are you really that lonely?”

“No, I just don’t ever get to see my favorite niece
—
okay,
only
niece.” Chloe squeezed Avery’s shoulders and then let go. “I don’t even know if you have a boyfriend!”

“Oh.” Avery’s shoulders drooped.
Boyfriend.
What a horrible word. “No, I don’t have a boyfriend,” she answered, walking around the room and running her finger along the furniture. “I’ve never … well, I almost had a boyfriend once, kind of.”

“Kind of?” Chloe folded her arms and leaned against the doorframe. “What do you mean?”

Ryan was my best friend’s boyfriend,
she wanted to say.
Or he was until I screwed it all up with my stupid memory.

“Nothing. It was a mistake.”

“I’m sorry to hear that,” Chloe said softly. “I do hope you meet someone here at college. Although …”

Avery looked up, realizing she hadn’t thought twice about meeting guys here. Why worry about it when they had always been so far out of her reach? “Although … what?” she asked.

“It’s one of my ground rules. No boys here in your room.”

Avery nodded. “I doubt that will ever be a problem,” she laughed.

Chloe went to bed around nine. Avery wasn’t used to sleeping so early, so she sat at her new desk and wrote in her journal for half an hour. Listing what had happened during the day was a long-time habit she wanted to break, but she decided to stay on the safe side for the moment in order to keep everything straight. She wrote down all of Chloe’s rules she could remember, like keeping the bathroom clean and washing the dishes after every meal. She didn’t want to forget something important and risk irritating her aunt. She wanted to keep up the good relationship they had going with each other.

When she finished writing in her journal, she made a cup of tea from Chloe’s stash and pulled on a jacket before slipping out to the front porch swing. The air was crisp for September and smelled rich, like earth and leaves. She looked up at the few stars twinkling between the clouds. She wanted to call her mom even though they’d already talked when she and Chloe had reached Seattle.

Looking down at her phone, she pushed the button to wake it up. She knew she was supposed to be strong and independent now, but it hurt too much to think of her mother alone at home. Ever since Avery’s dad had been shot and killed in Afghanistan, nothing had been the same. Her mom seemed to live wrapped in a shroud of sadness. It had been three years, but sometimes the pain of losing him was still so sharp it felt like it had happened three days ago.

Avery chewed on her bottom lip to keep her tears from breaking free. She had left her mother completely alone. All they’d had for the past few years was each other
—
making sure dinner was ready on time so they didn’t have to eat alone and think about how much they missed her dad, long walks downtown, rushed phone calls to check up, and dirt-caked summers in the garden. Then today Avery had left her. That had to hurt her, right? It sure as hell hurt Avery, and she had no idea how to make it go away.

“No, no, that’s not what I said!” a male voice called out, ripping Avery from her pity-fest.

Looking across the dark lawn and the fragmented silhouettes of bushes and trees waving in the porch light, she held her breath. From where she sat, she had a good view of the neighbor’s house. It was a similar house to Chloe’s
—
an older Victorian model with a peaked roof practically touching both houses to either side of it. The screen door opened as a guy in his early twenties slipped through and started pacing the front porch. He held a cell phone to his ear as he walked. He was tall and slim, and Avery could tell even under his suit that he was in shape. He had a lean sort of build, like a runner. His dark blond hair was carefully styled. So business-like, but young at the same time. Polished. Confident.

“Oh, come
on,
” he said after a heavy sigh. “Please listen. I only meant yesterday and today. Tonight was supposed to … yes, I know … no … tonight was
—
”

He pulled the phone away from his ear and stared at it. Avery followed his movements as he continued to pace the porch and then finally sat down on the front steps and let out a soft groan as he started pushing buttons on his phone. He looked completely dejected. Avery liked the way the porch light shone on the side of him facing her. He had a nice profile, the kind her mother would sketch in squares instead of ovals
—
as neat and tidy as her lists. For a second, Avery was tempted to put down her tea and go comfort him, but she hadn’t even lived in Seattle one day and wasn’t sure she felt that brave.

“Have a good day!” Chloe yelled. “I’ll see you at three at the library!”