Read If You See Her Online

If You See Her 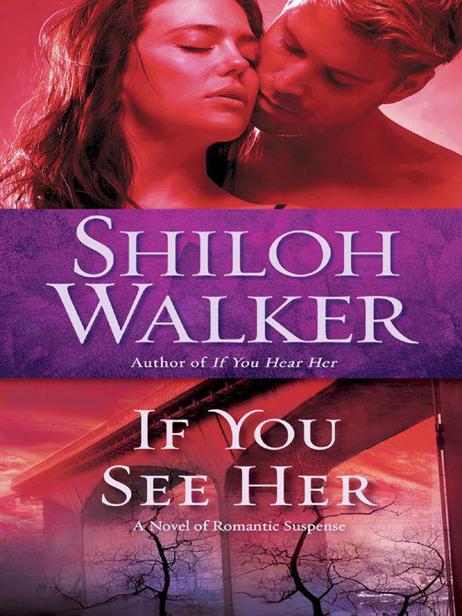 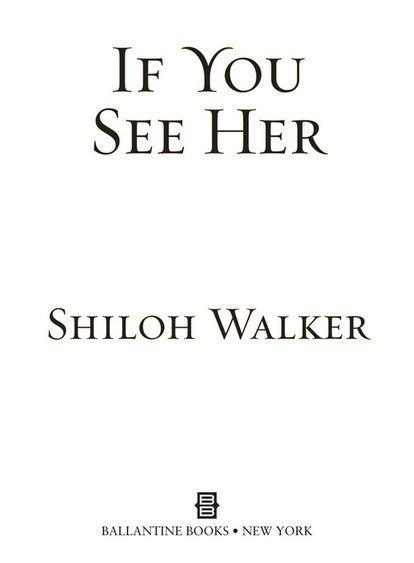 If You See Her
is a work of fiction. Names, characters, places, and incidents are the products of the author’s imagination or are used fictitiously. Any resemblance to actual events, locales, or persons, living or dead, is entirely coincidental.

This book contains an excerpt from the forthcoming book
If You Know Her
by Shiloh Walker. This excerpt has been set for this edition only and may not reflect the final content of the forthcoming edition.

Excerpt from
If You Know Her

Remington Jennings pinched the bridge of his nose and tried not to think about the sad green eyes and silken brown hair of one Hope Carson. “Disturbed, how? Can you help me out any here, Detective Carson?”

On the other end of the line, the man sighed. “Well, I’m reluctant to do that. You see, I wouldn’t have a DA on the phone, asking about my wife, if there wasn’t trouble. And I don’t want to cause her trouble.”

“She’s your ex-wife and she’s already got trouble. Do you want her to get the help she needs or not?” Remy asked, his voice taking on a sharp edge. Hell, anybody with half a brain could see that woman wouldn’t hurt a fly unless she was just pushed …

“You want to help her, is that it, Jennings?” The detective laughed, but it wasn’t a happy sound. It was sad and bitter.

“If I didn’t, I wouldn’t have called. I’m not trying to lock her up and throw away the key here. Help me out, Detective.”
Damn it, Carson, gimme a break
.

“Help you out. You mean help you help Hope.” Once more, Joseph Carson sighed. He was Hope’s ex and a
cop from out west. He was also proving to be one hell of a pain in the ass.

Faintly, Remy heard a heavy creak. “Mr. Jennings, pardon my French, but you can’t help Hope, because she doesn’t fucking
want
help. She’s a very troubled young woman. She … shit, this is hard, but we hadn’t been married very long when she was diagnosed with borderline personality disorder. She’s manipulative, a chameleon—she can make a person believe whatever they need to believe. You might
think
you’re seeing a woman you can help—if she’ll just
let
you. But that’s not the case. You’re seeing what she
wants
you to see.”

Remy clenched his jaw, closed his hand around the pen so tightly it snapped.

Shit—that … no. Not right. Everything inside screeched just how
wrong
that was. It couldn’t be right—it just couldn’t.

But his voice was cool, collected, as he said, “Borderline personality disorder, you said? Does she have a history of violence?”

Long, tense moments of silence passed and finally, Carson said, “Yeah. There’s a history of violence. Only against herself … and me. I kept it very well hidden. I didn’t want people thinking bad things about her, and on my part … well, I was ashamed. For her, for myself, for both of us. It wasn’t until things got really bad that I couldn’t hide it anymore.”

“You’re telling me she was violent with you?” Remy knew he needed to be making notes, processing this.

But he couldn’t—couldn’t process, couldn’t even wrap his mind around it. That woman lifting her hand against somebody?

No. The picture just wasn’t coming together for him.

“So you’re telling me she
does
have a history of violence?”

“Shit, didn’t I just go through that?” he snarled.

Remy clutched the phone so tight, it was amazing the plastic didn’t crack. This was wrong—so fucking wrong, and he knew it, knew it in his bones.

She’s manipulative, a chameleon—she can make a person believe whatever they need to believe. You might
think
you’re seeing a woman you can help—if she’ll just
let
you. But that’s not the case. You’re seeing what she
wants
you to see
.

Damn it, was he just letting her lead him around, he wondered?

Right then, he wasn’t sure.

He took a deep, slow breath, focused on the phone. “Can you give me some examples? Tell me what happened?”

“Examples. Shit.” Carson swore and then demanded, “Why should I tell you this? Just answer me that.”

“Because if she’s got a mental disorder, then she
does
need help and if she needs help, I’d rather her get help then get locked up. You should know her better than anybody. So if you do care about her, help me help her. Come on, Detective. You’re a cop. You’re sworn to uphold the law, to protect people. If your wife could prove dangerous …”

“You fucking lawyers, you always know what to say,” Carson muttered. But there was no anger, no malice in his voice. Just exhaustion. “Yeah, you could say she has violent tendencies. You could say she has a history of violence. She’s very manipulative and all those violent tendencies get worse when she doesn’t get her way. She becomes unstable, unpredictable. There is no telling what she might do to somebody she perceived as being in her way.”

Abruptly, his voice lost that calm, detached tone and he snarled, “There. I gave you all the dirt you needed and don’t tell me you can’t use that. God help me, I hate
myself even though I know she needs help. Now tell me what the fuck is going on!”

Remy blew out a slow breath and said, “She’s in the hospital at the moment—attempted suicide. Plus, there was an attack on a friend of hers. It looks like she might be responsible.”

“Fuck.” The word was harsh, heavy with fury and grief. “She’s tried to commit suicide before, so as much as I hate to hear it, that’s not a big surprise. But the friend … you said there was an attack on a friend?”

“Yes.” Remy scowled absently at nothing. “Maybe you’ve heard of him—it seems like the two of them go back quite a while. The name’s Law Reilly?”

“Reilly.” Carson grunted. “Yeah. I know Law. I wish I could say I was surprised to hear that she’d turned on him, but Hope’s always had a way of turning on those who’ve tried to help her. Those who care about her.”

Damn it, was there anything this guy could say that would make it a little bit easier for him to figure out how to handle Hope?

Of course if he
wanted
her put away, this guy would be making his whole damn night.

But right now, he could almost hear the cell door swinging shut on her and it was just turning Remy’s stomach. “So you think she could have hurt Mr. Reilly?”

“With Hope, I just don’t know. The one thing I
do
know? She’s capable of just about anything. I also know that I wish I could help her. Hell, I’d like to believe
you
can. But I know I can’t, and I can’t believe you can either. She doesn’t want help, won’t admit she needs it. Look, if there’s anything I can do to make sure she gets that help, just ask. I don’t want her in trouble, but I do want her to get help. Before it’s too late.”

Remy barely remembered the rest of the conversation.
He was too busy finally processing the fact that he’d more or less gotten the supporting evidence he needed.

Hope Carson’s fingerprints had been found all over the weapon used to beat Law Reilly.

She had slit her wrists.

She had a history of violence.

A history of turning on people who cared about her.

According to her ex-husband—who seemed to care about her—she was manipulative, prone to doing whatever it took to get her way.

Instead of feeling satisfied with what he needed to do, what he
could
do, he found himself thinking about those sad, sad green eyes …

By the time she landed at Blue Grass Airport, Nia Hollister was so damned tired, she could barely see straight, so sick at heart, she ached with it, and she longed to curl up in a dark, quiet room and just … sob.

Giving in to tears had never been her way, but this time, the temptation was strong, so overpowering, there were times when she felt the tears swelling in her throat like a knot. And a scream—just beyond the tears, there was a scream begging to break free.

She kept it held inside through sheer will alone.

Now wasn’t the time to scream, or to cry.

Somewhere inside her heart, she still wanted to believe they were wrong.

Joely wasn’t dead. She couldn’t be. They were like sisters—almost closer than sisters.

They rarely fought. They were best friends, in their hearts, their souls. Even when Nia was on the other side
of the country for half the year—or
out
of the country …

They could be wrong. All of them—Bryson, Joely’s fiancé, who wouldn’t even go with her to identify the body, the cops who insisted it was Joely … everybody. They could all be wrong.

But if it wasn’t her cousin lying dead in a morgue in Ash, Kentucky, then where was she?

Her fiancé hadn’t seen her in more than a month.

She wasn’t answering her cell phone or e-mail.

It was like she’d dropped off the face of the earth.

No … she hasn’t dropped off the face of the earth. She’s been lying dead in the deep freeze in the morgue, you selfish bitch, while you’re off on assignment
.