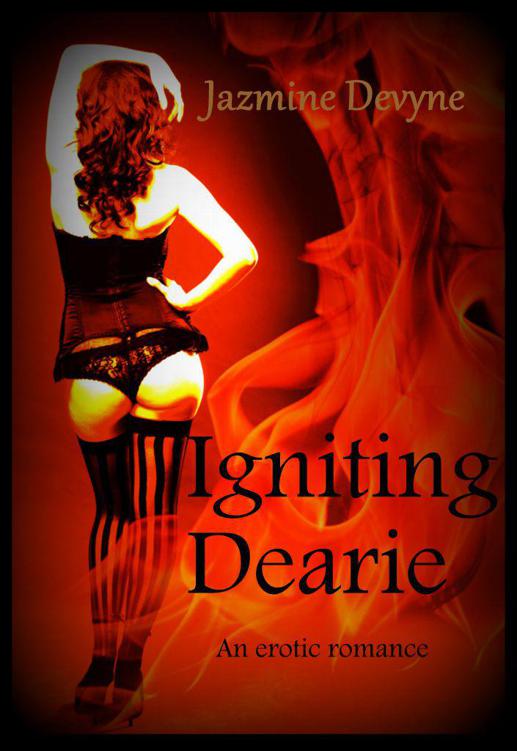 “Warning: The unauthorized reproduction or distribution of this copyrighted work is illegal. Criminal copyright infringement, including infringement without monetary gain, is investigated by the FBI and is punishable by up to five years in federal prison and a fine of $250,000.”

Igniting Dearie
is a work of fiction. Any resemblance to persons living or dead, or places, events or locales is coincidental. These characters are purely of the author’s imagination and used fictitiously.

This e-book contains material not suitable for readers 17 and under.

License Notes: This ebook is licensed for your personal enjoyment only. This ebook may not be re-sold or given away to other people. If you would like to share this book with another person, please purchase an additional copy for each recipient. If you’re reading this book and did not purchase it, or it was not purchased for your use only, then please return to

amazon.com and purchase your own copy.

If you would like to know more about the author you can follow her by becoming a fan here:

It was nearly noon when Dearie came to a sudden halt outside of
Allure
, the bar and grill where she was supposed to meet her friend, Belle. She wouldn’t be nervous at all if Belle was the only one she would be having lunch with. But somehow, Belle talked her into coming to the Saturday munch that her group of friends held the first of every month.
The mu
n
ch was a safe and social gathering of like-minded people that were
interested in kink and the BDSM
lifestyle.
She wouldn’t be in this predicament if she had kept her mouth shut when Belle was talking once again, about her Master, Devlin. Belle met him at the munch six months ago and they had been nearly inseparable since. In fact, Belle informed Dearie this morning that her Master asked her to move in with him. Dearie had to admit, while she was happy for her best friend and roommate, she was sad that Belle was moving out. That was yet another reason she agreed to come to the munch this time. If she enjoyed it, it would be another way she could spend time with her best friend now that they would be living apart. It also couldn’t hurt for her to start making new friends and who knows, maybe she would find her own special someone.

If truth be known, Dearie was keenly interested in the lifestyle her friend was so fond of.
H
er boyfriend Dirk
had
broke
n
up with her, stating he was bored with their relationship and sex life
.
Although it stung to admit it, she had also been bored with their routine of sex with the lights off, in the same few positions, with nothing new in the horizon. Her shyness was holding her back. Dirk hadn’t
tried to
coax her out of her shell. He was nearly as boring and shy as she was.
Now, Dearie was dying to try something new.

Dearie needed a real man. A manly man that wasn’t afraid of being in control. One that thrived in a position of dominance that would help her blossom the way Belle’s Master did for her. Belle was no longer a shrinking violet. Devlin had taken her under his wing and Belle progressed from caterpillar to a beautiful, confident butterfly in a matter of weeks. The difference in her was lovely to see. Before that, Belle had always been a sweet, meek and soft spoken young woman. Now
, she was so bright and happy. H
er Master not only made her see her worth, but he molded and shaped her into a stunning, vibrant, albeit sexually exuberant darling.

Looking down at her chocolate
brown
sweater dress that reached just over the tops of her suede boots, clinging to every ample curve she had, Dearie nearly turned around and went home. She wasn’t one to dress in revealing
apparel
, n
or
did she own a single item of clothing that was leather
,
like Belle had a fondness for wearing. She was going to stick out like a sore thumb. But as she turned to leave, she heard a joyful shriek and found herself wrapped up against her best girlfriend in a tight hug.

“Oh
,
Dearie! I’m so glad you came. I was afraid you would chicken out and stay home.” Belle kissed her cheeks and took her hand, tugging her into bar.

“Master Devlin is already here
,
along with several others. He just texted me to make sure I was on my way. One of his friends
—
you know the guy I was telling you about, Slate
—w
ell he’s here already.
He’s w
aiting to meet you and he is a dish
,
Dearie! You’ll see what I mean when you meet him.”

Still, Dearie hadn’t said a word, merely giggling at her friend
’
s excitement while trying to calm her pounding heart. Belle quickly weaved them through the tables until they reached the back of the bar where there was a room off to the side for private parties. There was a long table that filled most of the space
,
and it had several people already seated
,
and others
standing around it talking. Devlin was at the head of the table and to his right side was the sexiest man Dearie had ever seen. His
long, jet black, straight as a board hair
reach
ed
the middle of his back.

“See Dearie, I told you Slate’s a dish. You’re already staring
,
you bad girl.” Belle’s laughter had Dearie blushing ten shades of red and jerking her head towards her friend with a gasp.

“I wasn’t staring Belle, I was just looking around—don’t embarrass me in the first five minutes or I’m high-tailing it out of here,” she huffed, trying not
to
look over at Slate again.

“Oh you—stop being so uptight and live a little. That’s why you wanted to come
,
right? To live a little, have some fun, let your hair down,
and
get a spanking…” Belle’s girlish giggles were smothered with a kiss from Devlin.

“Are you being bad already
,
Belle?” Devlin looked at her sternly, but everyone could see the love in his eyes when he looked at Belle.

“No sir, I wouldn’t dare. I’m your good girl
,
remember?” Belle gave him a sweet smile and kissed his jaw.

“Then behave like a good girl and introduce your friend so we can sit down to eat. I’m starving to death.” He smacked her bottom, grinning when she yelped in surprise.

Gathering her wits
she took Dearie’s hand in hers.
“Everyone, this is my best friend Dearie Morgan. This is her first time attending a munch
,
so be on your best behavior so you don’t scare her off. That means no spanking her or pinching her under the table unless she’s asked for it.”

Dearie’s face turned a bright shade of red, nearly as red as her hair, but she couldn’t help but smile at everyone and wave. “It’s nice to meet all of you. Thank you for allowing me to join you today.”

Turning to her friend she whispered in her ear, “If Devlin doesn’t bust your ass for teasing me, I will, you freaking brat!”

Devlin was close enough that he heard the exchange and laughed. “Dearie darlin
g, you are quite welcome to stop
by the house afterwards and pick any of my paddles to swat her with. I would like very much to see that.” He winked at her and pulled out the chair next to him for Belle to sit down, pushing her in close to the table to make sure she was comfortable.

Dearie smiled at Devlin, thinking to herself that it might be a good idea to do just that when she realized the seat next to Belle was taken. She looked around; nerves kicking into high gear when she noticed most of the seats had filled already. As if sensing her inner turmoil, Devlin motioned over to the empty chair next to his friend. “Dearie, come over here and sit by my buddy
,
Slate. I promise,
he won’t bite—
unless you ask for it.”

Slate stood up and winked at her, pulling the chair out
,
waiting for her to sit before he sat back down. Looking over at her, he leaned close enough so only she could hear the deep timbre of his voice, “I do bite Dearie, I like to spank too, but
only if you beg me for it first.” H
e gave her a sexy smile and lifted his hand as the waitress walked by the room. Dearie inhaled sharply, causing her to cough. He patted her back in a soothing motion, a cocky smile on his face showed his pleasure from teasing her.

She blinked her eyes, still breathless from his saying he liked to bite and spank
,
“I…I
…
um
,
yes. Thank you
,
Slate.”

“A glass of red wine for the lady
,
and I’ll take a scotch on the rocks please.” Slate gave the waitress a winning smile as she
took their drink orders and
passed out
menus
.

Dearie smiled when she saw the waitress move on to her friends.
She listened as
Devlin ordered Belle her favorite drink, a slow gin fizz, and a gin and tonic for himself. It made
her
happy
, that Belle
had found a man who did
the little things
for
her
, the way her
Master did. It also stirred a longing
within Dearie,
to have
someone who would take the time to learn her wants, needs and favorite things like that.

Slate must have noticed her look
ing
longing
ly
as she watched her friend. He spoke in a low voice to her, his hand now rubbing a gentle but firm circle on her lower back. “Those two have been good for each other haven’t they?”

She tu
rned her head and smiled at him,
“Yes, I think if two people can be perfect for each other, it’s those two.”

“That’s how it should be when a man finds his mate. They should be so in tune with each other that even when they are around others, the world just kind of falls away when they are side by side. Look at the way she stares into his eyes, she’s completely enamored. And him, well you can tell just by the way he smiles at her that he’s head over heels. They barely even realize there
are
other people in the room with them
,
they are so focused on each other.” His fingers were gently rubbing the tension from her back, traveling up the center and delving underneath her fiery red curls to massage the nape of her neck.

Dearie was practically purring, arching a bit against his hand as she nodded in agreement. “Is it not strange to know that she calls him
‘
Master
’
and he considers he
r his submissive? Maybe I’m
a little
old fashioned
,
but it almost makes me think he doesn’t respect her if he thinks she is beneath him. I guess this whole Dominant/submissive thing is still so new to me it can be confusing.” She couldn’t believe she felt comfortable enough
to
talk about this with a complete stranger, but something about Slate made her feel safe and secure.