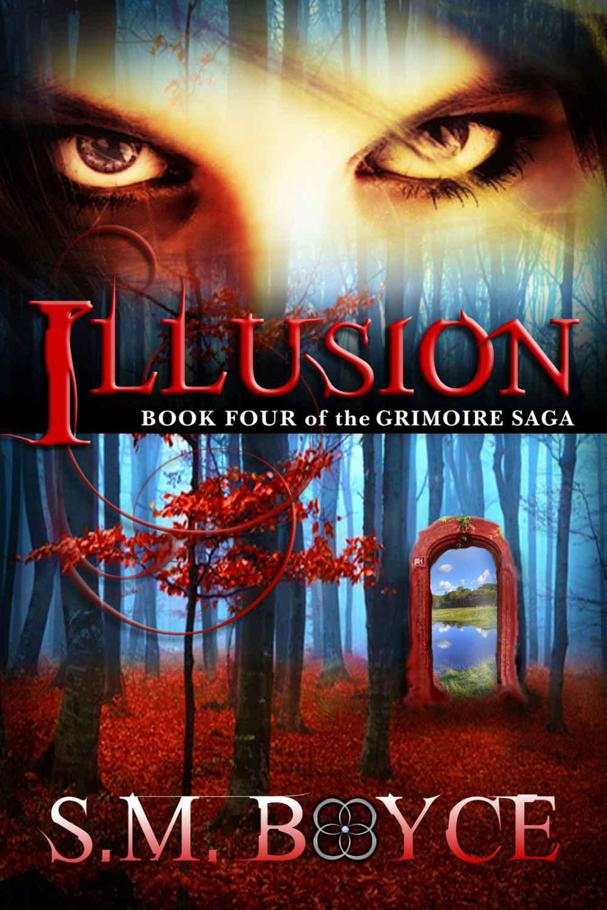 Book Four of the Grimoire Saga

A Novel by S.M. Boyce

I hope you enjoy this finale to the Grimoire Saga. I’m excited to bring you the
Ourean Chronicles
next winter (a spinoff series with backstories of your favorite supporting characters in the Grimoire Saga), but it’s bittersweet to see my debut series come to a close.

Happy reading. It’s my cruel hope that I keep you from sleeping until you read the final pages.

The final chapter in the war for Ourea ends with blood.

Kara Magari is an icon. A hero. The people love her. The royalty tolerates her. She has everything—an army, allies, and a close circle of chosen family. They believe she will end the war, and they shouldn’t. She’s as scared as they are. She just can’t show it.

The war she accidentally started ends with a final battle that will either save or enslave her people. She will do anything to win—until she learns the cost of victory.

Braeden Drakonin is afraid of what he’ll become when he takes over his father’s kingdom—that much authority can change a man. But his father has already tried to kill him more than once, and it’s time to end his reign. Braeden’s armies are ready. His strategy is foolproof. His generals are waiting for the order to attack. It’s only in the final seconds before the battle begins that he realizes he missed one crucial detail—the traitor.

This novel is a work of fiction. Names, characters, places and incidents are either products of the author’s imagination or used fictitiously. Any resemblance to actual events, locales, or persons, living, dead, or undead, is entirely coincidental.

No part of this publication can be reproduced or transmitted in any form or by any means, electronic or mechanical, without permission in writing from Sarah Montee.

For J. N. Chaney, the Lewis to my Tolkien.

Deidre scanned the room. Candles illuminated pockets of the chamber that was once Niccoli’s office, their light casting the shadows of the seventeen men around her on crimson walls. The hush in the room mirrored the quiet night outside, where trees rustled in a soft wind. Chairs creaked as men shifted in their seats. Some rested their hands on sword hilts.

These men—elder children like her, others Niccoli had turned at some point in the last thousand or more years—all eyed her. Some glared. Some smirked. But everyone listened.

Carden’s Xlijnughl—his gray teleporting creature—purred, the low grumble humming in her ear. It sat on her shoulder, its tail curled around her neck for balance. The silver fur gleamed in the candlelight, smooth as silk. She smiled. Its presence had already raised a few eyebrows in the room, though no one had yet dared to ask her how she found it. After she’d killed Carden, the little creature ran laps around the room, apparently pleased with its own freedom. A night of scratching its ears and a few steaks later, she’d bought its loyalty. It would serve her well.

Deidre launched into her prepared speech for the elder children. “The yakona will slaughter each other soon, and I want you all to experience the feast of souls to follow. Carden takes no prisoners. You and your families will have your choice of warriors, healers, and ranking officials in the yakona kingdoms. Carden may even give you some of his own people if you fancy them. He wants you in this war.”

She loved the taste of lies, especially when the lies convinced fools to obey her. These idiots would die, and their children—the isen they had turned—would die along with them.

“Why should we care about yakona wars?” an isen asked, his voice rich with an Indian accent. Rami. His almond-shaped eyes caught her gaze and held it, unwavering as he challenged her. He leaned back in his chair, his brown skin even darker in the low light. But his fingers played with the hem of his shirt, betraying his nerves. He would be easy to break.

She shrugged. “Why not? It won’t even be a challenge for masterful isen like all of you.”

“That doesn’t mean we should meddle,” another man said.

Deidre panned the room to see who spoke. Andor, a thousand-year-old Viking, leaned his broad frame against the wall, thick arms crossed. He blocked much of the wall, towering a good two feet over her with a neck as wide as her thigh. He narrowed his eyes, and a black curl fell in front of his face. He never could conceal his bias well. He’d always hated her.

She feigned a smile. “It’s not meddling. It’s an opportunity. I’d hoped you were smart enough to see that.”

“An opportunity to die.”

“An opportunity to collect the finest souls in Ourea,” she corrected.

“We won’t obey a yakona Blood, feast or no,” another isen said. This one had an English accent.

She turned to the new voice—Rupert. Inwardly, she groaned. He rubbed his chin, presumably musing the ramifications of her plan, but winked when she caught his eye. His gaze shifted to her legs, and his other hand tightened its hold on his chair’s armrest. She suppressed the desire to gag. Pig.

Instead, Deidre forced a laugh. “It’s one battle. It’s not as if Carden can control you like Niccoli did.”

“What are you up to, woman?” Andor interrupted.

She let her annoyance seep through. “Care to elaborate?”

He took a few steps forward, his wide shoulders hiding the window as he moved. “You’ve never belonged here. You’ve never turned an isen of your own. You have no family, no faith in the isen life. It’s publicly known you think we’re all demons or monsters of some sort. Why should we trust anything you say?”

Andor huffed. “She tried to kill Niccoli once, or have you forgotten? What’s stopping her from killing us?”

“Many of us would have killed Niccoli, given the chance,” Rami replied.

A few heads nodded in agreement.

Andor crossed his arms, back straightening. “She’s killed others in this camp. Elder children like us, brothers. She can’t be trusted.”

Deidre looked at the floor to hide a smile. That murder spree had been fun.

“This isn’t about trust,” she chimed in.

“I don’t want your trust, nor do I trust any of you. This war with the yakona is about power. Succession. Niccoli is dead, and you’re all competing to take his place here at the guild. Those with the most powerful children win. You get powerful children by allowing those isen to consume souls of the most powerful mortals alive. It’s fairly simple. Like I said, this isn’t about trust or aiding the yakona. It’s preparation for the real war—the war to control this guild. He who wants to rule here would be foolish to waste this opportunity.”

The room hushed. A candle crackled in the silence. A few isen nodded. Good. At least some would take her up on her offer.

She continued. “Think it over, gentlemen. I don’t usually wait for anyone, but for you, I’ll let you decide by tomorrow morning. Those wise enough to take advantage of this offer can leave with me at sunrise.”

Single Ladies by Tamika Jeffries
Girls, Guilty but Somehow Glorious by Sue Limb
Cowboy Fever by Joanne Kennedy
Lassiter Tough by Loren Zane Grey
Take The Star Road (The Maxwell Saga) by Peter Grant
Lonestar Angel by Colleen Coble
A Touch of Infinity by Howard Fast
Bound Together by Marie Coulson
You Can't Read This Book: Censorship in an Age of Freedom by Nick Cohen
Masterpiece by Juliette Jones
Our partner