Read I'm So Sure Online 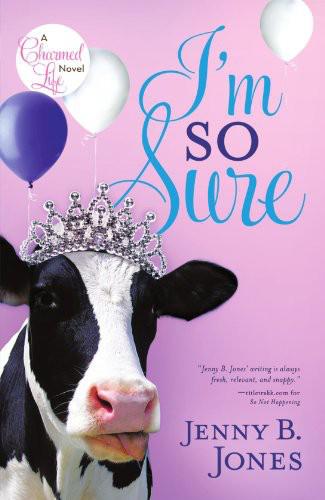 Other Books by Jenny B. Jones Include:

Just Between You and Me

In Between
On the Loose
The Big Picture

Thomas Nelson, Inc., titles may be purchased in bulk for educational, business, funaising, or sales promotional use. For information, please ail [email protected]

Jones, Jenny B., 1975–
I’m so sure / Jenny B. Jones.
p. cm. — (The charmed life)
Summary: When Bella's stepfather participates in a reality television show, the entire family gets involved, and as her less-than-perfect life goes on public display, she must rely on her Christian faith while she investigates a mystery involving the prom, deals with her returning ex-boyfriend, and negotiates an awkward relationship with the irritating yet attractive editor of the school newspaper.
ISBN 978-1-59554-542-8 (softcover)
[1. Dating (Social customs)—Fiction. 2. High schools—Fiction. 3. Schools—Fiction. 4. Journalism—Fiction. 5. Christian life—Fiction. 6. Reality television programs—Fiction. 7. Mystery and detective stories.] I. Title. II. Title: I am so sure.
PZ7. J720313Im 2009
[Fic]—dc22

This book is dedicated to my super handsome nephew, Hardy. You are the sweetest, smartest, niftiest boy in the world. And I cannot believe your dad, who used to “accidentally” punch me in the nose and make me his wrestling guinea pig, could have a son as perfect as you. I love you!

I lower my binoculars and swap them for a camera. A moment like this needs some megapixel proof. The lens zooms closer and closer on my target. I shove my way farther into the bushes of the Truman City Park and aim toward the old tennis court, where the loser twines himself around a girl who is definitely
not
his girlfriend. Leaning over and balancing on one leg, I angle my body and get the perfect shot. One more close-up to seal the deal.

With a squeal and a jerk, I topple over and crash into the shrubs.

Spitting dried leaves, I glare at the boy standing over me. “Hey, Chief.”

As the sun shines behind him, the editor of the Truman High
Tribune
smiles, and for a moment I forget that I’m sprawled in a small tree with limbs poking me in very uncomfortable places.

Luke Sullivan is
de
lish. Except for his attitude. And his arrogance. And his broodiness. And his genius IQ that makes me feel like I have all the intellect of a gerbil.

“What are you doing?” With his hand on mine, he pulls me upright and I’m catapulted straight into his chest.

“Working.” I take a step back. “Mindy Munson hired me to find out if her boyfriend was cheating.” I jerk my head toward the couple making up their own game on the court. “I’d say we have a definite love violation here.”

“So you’re taking pictures of a guy without his permission. Don’t you think that’s a little creepy? A little unethical?”

I consider the idea. “Not so much.”

“This has got to stop. Ever since we busted the football team, people think you’re Nancy Drew.”

It’s true. When you get kidnapped by the leader of a deadly football gang, and said leader tries to permanently erase you from the planet, people think you’re the stuff. And when you walk away from the attempted murder with your head still intact, folks start to think you’re some sort of sleuthy hero.

Oh, the many perks of almost dying. I’ve spent the last two months tracking down stolen iPods, cheating boyfriends, a drill team stalker, and one lost bullfrog by the name of Mr. Toady Pants.

Not only does it keep me busy, it keeps me in shoes. Hey, the Prada fairy doesn’t visit me like she used to. I do what I must.

“Did you finish the article I assigned?” Now Luke’s all business.

“I’m working here. According to my watch the school day has been over for an hour, and believe it or not, I do have a life outside of the paper. What are you doing here anyway? If you’re so hard up for female company that you have to follow me around, maybe you should give Mindy Munson a call.” I throw a look at her loser boyfriend. “My keen reporter’s instinct says she’ll be on the market by tonight.”

A corner of his mouth twitches; then he tilts his head and pierces me with those ocean blue eyes. “Who says I’m on the market?”

I blink. “Um . . . because I’ve never seen you with a girl. I realize I’m new to detective work and all, but unless your lady is invisible, she—”

“She’s at Harvard.” He picks a leaf from my jacket. “Freshman. And no, we don’t see much of each other, but she should be in for Christmas.”

Why do I suddenly feel like a deflated balloon? “You never mentioned her.”

A chilly wind blows, and my chestnut hair reassembles itself into a new formation. Luke reaches out and tucks a wayward strand back into place, his fingers sliding across my ear.

I jump as a flash explodes in my face. As three men surround us, Luke pushes me behind his back.

A squatty man sporting a Donald Trump comb-over steps forward. “Can we get another one of you and your boyfriend?”

I peek around Luke. “
What?
Who are you?” I shove Luke’s protective hands away and plant a fist at my hip. “And this
isn’t
my boyfriend.” Why am I explaining here?

“Doesn’t matter—just move in closer. These will be great promo shots.”

“Drop the camera and leave her alone.” Luke steps toward the guy. The boy may be tall and wiry, but he’s a beast on the soccer field, so he’s got some muscles on that frame.

“We just need a few more pics of the girl. Maybe you two could huddle up again?”

I gasp. “We were
not
‘huddled up.’” Though we have kissed once. But it was just to escape the deranged football players. I barely remember it. Just a dim, faded . . . totally hot memory. Donald Trump snaps another picture. “I don’t know who you are, but how dare you spy on me and take my picture without my permission!”

Luke quirks a dark brow my way, then returns his stare to Mr. Comb-over. “Who are you?”

The short man shoves his card in Luke’s hand. “Marv Noblitz. I work for WWT.”

Though it’s a vague fog swirling in my mind, I feel trouble beginning to take shape. “I think you might be looking for my step-dad.” He’s known as Captain Iron Jack on the amateur wrestling circuit. But I just call him Stepdaddy Spandex.

“We’re looking for the entire family.”

A horror movie soundtrack begins to play at full volume in my head. The kind of tune that pounds out right before things get ugly and the fake blood spews. “Look, Mr. Noblitz, Jake’s the wrestler. Whatever you’re working on, I didn’t sign up for it.”

“It’s a reality show—
Pile Driver of Dreams
.” He chuckles. “And you didn’t have to sign up—your stepdad did that for you.”

“Huh?” My brain tingles with dread.

“Get ready, kid.” He pulls out a cigar and sticks it in his mouth. “Hope you’re prepared to live your life in front of millions, because we’re going to follow you and your family for months. You’ll barely take a tinkle that we won’t be there with a camera.”

I stand there mute. Frozen.

Luke pats me on the back, his face grim. “Looks like Hollywood’s knocking on your door.”

I sigh and close my eyes. “Yeah, well somebody needs to tell Hollywood Bella Kirkwood is
not
at home.”

W
ith a camera crew on my tail, I speed through downtown, blaze through some dirt roads, and lose them with a couple of detours near Old Man Peterson’s farm. It will buy me at least a few minutes.

I barely put my lime green VW Bug in park before I leap out, oblivious to the biting December chill.

“Mo-
ther
!” Ever since my mom moved us from Manhattan to marry her factory-working, wrestler wannabe, life has been nuts—at best. But
this
is going too far!

“Mom!” Touring the house, I find her, Jake, and my little stepbrother, Robbie, in our newly remodeled kitchen. Laughing. Like life is fine.

Mom cuts into a roll of cookie dough. “Hey, sweetie. We were—” Her knife freezes. “What’s wrong?”

Mom runs to me and pulls me into a seat. “Calm down, Bella. How do you know about that?”

My mouth drops. “The question is
why
didn’t I know sooner? Like
before
I got all Britney Speared with the camera crew?” Let the record show, I totally had underwear on.

“A few months ago I saw on TV where they were scouting for ten wrestlers for a reality show. So I sent in Jake’s application.”

Jake’s arm slinks around my mom. “We had a one-in-a-million shot of making it.”

My laugh is bitter. “With your luck with the odds, I wish you’d bought a lotto ticket instead. Your camera crew should be here any minute.”

Jake lets out a shout, then grabs my mom and twirls her around the kitchen. My six-year-old stepbrother takes the opportunity to run circles around them, his Superman cape flying behind. Their whooping happiness makes me want to hurl.

Okay, so maybe most girls would think it would be nifty-cool to have a camera crew in your house and be on TV once a week. But not me. Not when it is centered around your stepfather’s attempts at wrestling. The head of our household will be seen shirtless. In spandex. And a pirate costume. He says
aargh
, for crying out loud! I will never be able to hold my head up. And my own dad is going to flip. Though he’s been a guest commentator on
E! News
a lot as a plastic surgeon to the stars, he’s never been able to get his own show. And now my stepdad gets on TV—just for doing a really good body-slam.