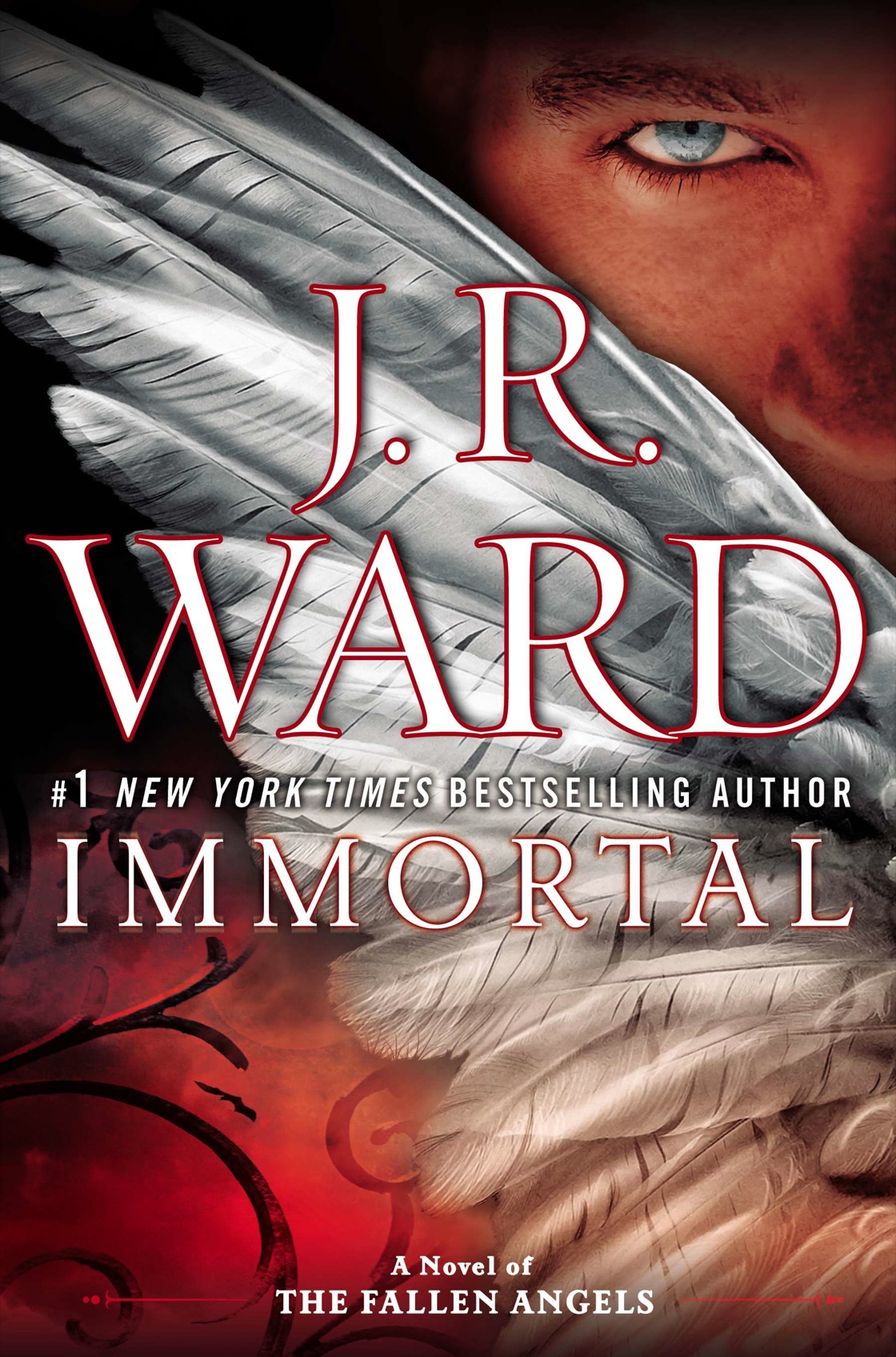 NOVELS OF THE FALLEN ANGELS 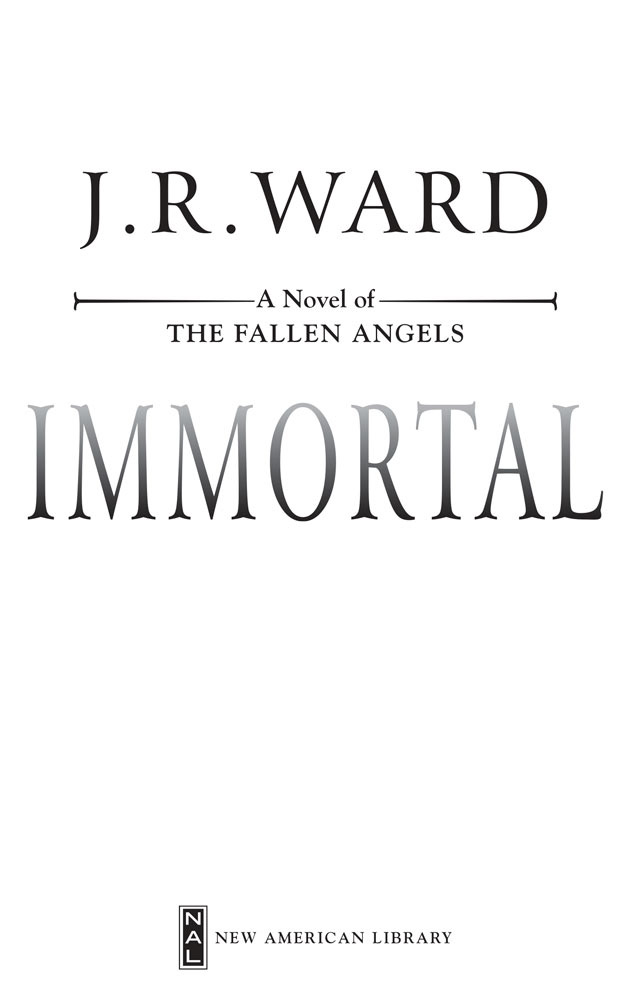 Immortal: a novel of the fallen angels/J. R. Ward.

who gave me ten extra, wonderful weeks with someone I loved.

If that isn't an angel, I don't know what is.

With immense gratitude to the readers of the Fallen Angels! Thank you so very much for all the support and guidance: Steven Axelrod, Kara Welsh, Claire Zion, and Leslie Gelbman. Thank you also to everyone at New American Libraryâthese books are truly a team effort.

With love to Team Waudâyou know who you are. This simply could not happen without you.

None of this would be possible without: my loving husband, who is my adviser and caretaker and visionary; my wonderful mother, who has given me so much love I couldn't possibly ever repay her; my family (both those of blood and those by adoption); and my dearest friends.

Oh, and to my WriterAssistant, Naamah. Book number two in the bag!

Sometimes a girl just needed a new pair of kicks.

As the demon Devina strode through the Freidmont Hotel's lobby, she was all about the good feels, strutting it large, hinging those hips. In her mind, her thoughts were locked on last-night action. On her body, she wore skintight leather from her double-Ds to her size nines and all the acreage in between. And talk about pheromonesâif she put out any more of them, her fuck-me aura would burn holes through the paneled walls.

Eyes followed her. Men's and women's. But why wouldn't they? Caldwell, New York, wasn't that far from NYC, and famous people came up all the time from the Big Apple. Besides, even though they didn't recognize her from movies or TV, she was still a world-class beauty.

At least in this current suit of flesh.

Back to the shoes.

She was heading to the revolving doors, crossing that smooth stretch of shiny, creamy marble, when she saw the stilettosâand stopped dead. Under a Plexiglas case, as if they were jewels, the pair of golden Louboutins was spotlit from above, and oh, the loveliness: The entire skin of each of them was covered in a million micro Swarovski crystals, until their surface looked liquid.
And the style? Razor-thin heels that were high enough to put you
en pointe
. Tiny toe box to show off the cleav. Hidden platforms to provide support on the ball of the foot.

And the capper was, of course, the red sole, the underside of the heels flashing the color of a candied apple.

It was love at first sight.

She didn't even look at the man who'd materialized beside her. OCD was a disease of capture, and its hooks were once again nailing her in the heart. Even though she had nearly a thousand pairs in her wardrobe, the idea that she couldn't have this particular twosome, that someone or something might get in the way of her possessing them and keeping them, made her chest tight, her palms sweaty, and her blood flutter through her veins.

She followed like a lamb, looking over her shoulder to double-check that the shoes were still where she'd seen them. Worse came to worst, she could always just steal themâ

In the back of her mind, a whoaaaaaaaaaa-Nelly rang out. For the past year, she'd been going to therapy to try to stop these kinds of tailspins.

It is not going to solve your problems with Jim.

FFS, what was she supposed to say to herself? She tried to remember the combination of words that was supposed to put this out-of-control need into a healthier perspective, but there was a traffic jam in her system of neuro-highways. All she could think of was, Get it, keep it, count it.

Damn it, this was a big step back. Thanks to that fully actualized, post-menopausal woman with the PhD on her wall and the couch-cushion body, Devina had been making headway with the compulsions. But thisÂ .Â .Â . this was old-school, and not in a good way.

And yeah, she knew why this was happening.

It was easier to think about the shoes.

The boutique was in the rear of the lobby, and as she walked through the glass-and-marble entrance, the scented air did nothing to ease the burn. The only thing that was going to help wasâ

“Was that a nine?” the salesman asked.

Devina shot a glare over. Mr. Can't Remmy a Damn Shoe Size had a good suit on and a silk tie, and his salt-and-pepper hair was sculpted back from his Botox'd forehead. Turned out the sophisticated fragrance in the place was his cologne, and as he fiddled with his handkerchief, his nails were buffed to a high shine.

He was too put-together to kill. And besides, how would she get her shoes then?

“Very good, madam. Would you care for a mimosa?”

Left to her own devices, she paced around the fake Aubusson and checked out the other high-ends you could buy. Judith Leiber minaudiÃ¨res. More shoes, but nothing she was panting to have. Akris jackets. St. John knits. Armani dresses.

Catching sight of herself in one of the many mirrors, she checked out her own assÂ .Â .Â . and thought back to how she'd spent the night.

Her one true love had banged the shit out of her. They'd had about eight hours of epic sex up in her suite, just like she'd wanted.
And the fact that the entire time he'd hated himself for it? Icing on the cake.

Jim Heron was a hell of a lover.

Tragically, that wasn't the only thing he wasâand therein lay the problem. He was a cheater. He was a liar. And he didn't understand the concept of monogamy: Even after their incredible night? He'd gone back home to someone else.

And God, the idea that that virgin Sissy was the competition? Now that shit made her want to buy everything in this store. Even the crap that didn't fit her.

As she started to estimate the cost, item by item, she stopped herself and tried to placate her OCD with the reality that she was leading three rounds to two in the war over humanityâso if she won the battle for this current soul? By the rules the Creator had set up, she got everything: Not only did she keep her precious collections and her children down in Hell, but she gained dominion over the earth as well as Heaven above.

For someone hardwired like her, it was a wet dream unparalleled, a winning Powerball lottery ticket with a jackpot in the hundreds of billions.

You wanna talk about shoe collections? She could enslave Manolo, Stuie, Christianâand get them to make nothing but footwear for her for time immemorial.

But even better, she'd get Jimâ

Devina turned around. Mr. Manicure had come out from the backÂ .Â .Â . but didn't have a box in his hand. “Excuse me?”

“We have only the size eight. I can orderâ”

The man cleared his throat. Twice. Then he opened his mouth to try to breathe. Brought his carefully tended hands up to his carefully knotted tie. Went walleyed.

“You were saying?” Devina drawled.

A little clicking sound came out of him as he tried to remain composed while failing to bring air into his lungs.

But damn it, if she killed him, how would she find the shoes in the back?

Devina released the invisible pressure. “Bring me the eights.”

The man wheezed and threw a hand out to catch himself on the Leiber display, knocking a couple of the hard sparklies off their posts.

“Now,” she barked, flashing her eyes at him.

Cue the shuffling across that rug. And the instant he was behind the silk curtain, the round of coughing and wheezing was like an asthmatic in a greenhouse. But he did emerge with a beige-colored box about two minutes and thirty-nine seconds later. Not that she was counting.

She didn't hear a word he said as he approached, her eyes locked on what was in his hands. There was a temptation to snatch the shit out of his grip, but she wanted to see the shoes on her feet, even if they didn't go with her outfit.

Although, dayum, Swarovski and black leather was classic.

Devina hit the row of three damask-covered chairs and kicked off her black Guccis. “Give them to me now.”

The gem-like twinkling was better than those little purses. Better than what she'd seen out in the lobby through the display case. And the color was that of Caucasian flesh.

She closed her eyes reverently and sent up a prayer for the salesman to keep quietâif he said one thing about her feet being too big, she was going to take his head off, and not verbally.

With care, she un-bagged the other one and lined up both shoes side by side on the floor. Then she released the structure of her feet so that as she slid her tootsies into the works of art, her bones and skin were like water filling a vase, nothing but accommodation.

The salesman seemed a little surprised as she stood up and walked around all comfy-comfy, but he wasn't going to say boo, and how lucky for him. Plus, come on, the Loubous were what, like nearly five grand? And he had to be on commission.

Devina smiled as she stared down at her feet, a flush of giddy relief wiping away all the angst about Jim and the war and that fucking Sissy. All at once she was glowing from the inside out, as if she'd had a rip-roaring orgasm, a hot-fudge sundae, and a deep tissue massage all at once.

These were the most perfect shoes in the entire world, and they were hers and nobody else's, and she was taking them to her wardrobe right nowâ

That bell in the back of her head rang again, the one that told her when she was backsliding. But screw that.

The stillies were epic, and she couldn't wait for Jim to see her in 'em. Preferably while the rest of her was nakey.

Yup, these she would save for him.

Popping them off her feet, she put them back into the box just as they'd been presented to her and double-checked to make sure the little red bag with the extra heel tips was in there. Then she glanced over at the salesmanâwho was taking a discreet puff from an inhaler.

“Put them on my tab,” she said triumphantly. “I'm in the penthouse.”

When your man went home to another, retail therapy was the only way to go.

Dangerous Tides by Christine Feehan
Into the Storm by Avi
Dodger for President by Jordan Sonnenblick
Grayson by Lynne Cox
Aimee (A Time for Love Book 3) by Phelps, Brandi
Elysia by Brian Lumley
Bitter Eden: A Novel by Tatamkhulu Afrika
Murderville 2: The Epidemic by Ashley, Jaquavis
Moon Over Soho by Ben Aaronovitch
Subservience by Chandra Ryan
Our partner