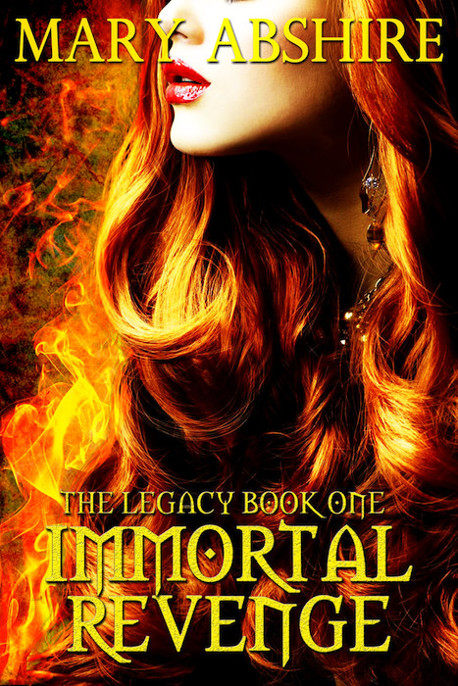 Welcome to the Neighborhood

The Legacy, Book One

A special thank you to all my friends, daughter, editor, publisher, and readers. I appreciate your support. You're awesome!

Ravenous flames devoured the headless body pinned to the makeshift cross in the front yard. Katie stared, frozen in shock as she sat in her car. Chills shot down her spine. Her gut instinct told her the body burning was her boyfriend, her lover for the last nine years.

Smoke drifted into the car from the vents. One breath triggered bile to rise in her throat. She shoved the door open and bent. Her dinner came out in a mad gush, flying onto the driveway. Tears streamed down her cheeks while her stomach muscles tightened. More of the disgusting fluid rocketed up to her mouth. Pain and heartache overwhelmed her mind, body and soul. He was gone. Forever. He’d said the word countless times over the years. The meaning of the word never hit home, until now.

Sirens screamed through the night, moving closer by the second. The irritating sound intensified the deep throb in her head. She vomited again, unable to control the spasms. Through the thick smoke, she smelled gasoline. Oh God, they’d poured it on him to make sure he couldn’t survive. As if decapitation wasn’t enough.

Bright lights flashed in the darkness as they headed toward her. She’d stopped in the middle of the long driveway, not far from the burning cross holding her lover. Two police cruisers rushed from the road and came to a stop behind her car. Large fire engines blaring their horns passed them and her vehicle. They drove by so fast her vehicle swayed slightly.

“Katie?” Officer Hildebrand asked. She recognized his voice from having served him drinks at the bar every Friday night when he was off duty. “Katie, are you all right?”

She wiped her mouth with the back of her hand as she watched him jog toward her. He passed her and stopped a few feet in front of her car.

“Holy mother of…” He directed his gaze to the burning cross. “Is that a body?”

Another violent spasm hit her stomach. Teeth clenched and lips tight together, she held the urge to barf again, but she couldn’t stop the flood of tears pouring from her eyes.

“Ben, would you stop looking at it and help her out,” Officer Charles Donahue said, walking toward them. His deep smoker’s voice identified him anywhere.

“Katie!” Officer Hildebrand blurted out as if he’d forgotten about her. He rushed toward her and stopped short where her dinner lay on the ground. “Are you all right? Did someone hurt you?”

Unable to speak, she shook her head. Grief stabbed her in the heart. Why? How? Who? Something such as this shouldn’t have happened.

Officer Donahue stopped a few feet to the side of her door and took off his hat. His white hair gleamed thanks to the bright flames. He stared at the sight on the front yard. “My God.”

Officer Ben reached across the circle of puke and placed his hand on her shoulder. “Are you injured? Do you need medical attention?”

She shook her head again as more tears ran from her eyes. Gone. Kyle was gone. How could this happen? The question repeated in her mind.

“Ben, why don’t you drive her back to the station?” Officer Charles said. “I’ll take her car and meet you back there in a few minutes.” He placed his hat back on his head and straightened it.

“Katie, would you like to come with me?” Ben asked softly, as if he were a parent speaking to a young child.

Katie straightened her tense body. From the gap between the car door and the front windshield, she stared at Kyle’s farmhouse. Large flames leaped toward the sky and consumed the structure. Firemen carrying long hoses ran toward her home, but kept a distance. Clearly they couldn’t save it. God, so many memories. So much passionate love shared. So much laughter and happiness occurred within the walls.

“Come on,” Ben said, wrapping his fingers around her arm.

She grabbed her purse sitting in the passenger seat. Leaving the keys in the ignition and the car running, she slowly rose and avoided the disgusting mess on the ground.

Ben kept his hand on her arm while he escorted her toward his vehicle. She walked with her head up and as much poise as she could gather, but her heart ached fiercely. More tears escaped her eyes. Everything she owned and ever cared about was gone. She had nowhere to go.

Ben helped her into the passenger side of the police cruiser, opening the door and closing it once she was situated inside. Katie’s lip quivered as she stared ahead at the bright flames devouring the home she’d known for the last eight years and the one man on earth she’d loved. He was invincible, a fighter to the end. He was strong, smart, experienced, a teacher and lover at heart. He was also immortal.

Ben slammed his car door. “There’s a bag under the seat if you need to…”

“Right.” His tone indicated he didn’t believe her reply.

Clutching her purse to her chest, she leaned back and closed her eyes while the non-stop flow of tears continued. She wanted to believe she was having a nightmare. Soon, she’d wake up in Kyle’s arms, in their soft bed and everything would be all right.

Reality returned as she sat in a bright room sitting by a table. The buzz from the florescent light bulbs above her head reminded her of bees swarming around a nest. Voices and ringing phones spilled into the small room through the half open door. A strong coffee aroma drifted in also. She had no idea how much time had passed and no recollection of walking into the police station, but she’d been in it a few times to know exactly where she was.

Ben walked in the interrogation room, followed by Charles. Both wore their beige uniforms with their shiny gold badges. Ben took the seat on the opposite side of her while Charles sat facing her from the end of the table. Charles, the older of the two, arrived with steaming coffee in his hand. Ben held a paper notebook. Both stared at her.

Charles set his mug on the table. “The coroner called a minute ago and said he’ll try to have identification within forty-eight hours.”

Good luck with that
, the voice in her head chuckled. He was a five-century-old vampire. Computer records didn’t date back that far.

Katie already knew the truth. The local town of Mishawaka didn’t have much of a crime problem, not of the murdering kind anyway. Cross burning and the Ku Klux Klan died over six decades ago. Based on this and knowledge she had about vampires, logic dictated the body belonged to Kyle.

“I already know the identity,” she said softly.

Ben withdrew a pen from the pocket on his shirt. “Katie, we would like to ask you a few questions, if you are up to it.”

His sad brown eyes reflected deep compassion. They’d known each other since college, before she’d met Kyle. They’d even had a few classes together and went out on a few dates during her pre-Kyle years. He never married, stayed close to town, took part in local festivities and enjoyed working. On Friday nights, one of Ben’s few off duty nights, he’d come into the bar, sit for a few hours, drink and chat with her. He tipped her nicely too. The all around good guy cop had always treated her with kindness and respect, not because of his badge but because that was they type of person he was. Perhaps he still had feelings for her too.

Could he understand her loss for a vampire, or even that they existed? Unequivocally the answer was no. If she told him the truth, Kyle was immortal or about Kyle’s involvement with the Order of the Legacy, he’d probably commit her to a state asylum.

“I’ll get it.” The old man with wrinkled skin left promptly.

“I’m sorry about all this. And if it is Kyle, I’m sorry for your loss.”

Ben’s sympathetic words brought tears to her eyes. No one could fill the large hole in her heart. Kyle was a one of a kind man–loving, generous, witty, incredibly sexy and had a body of steel. The immortal part was a minor detail, along with his need for blood to sustain him. He never killed or harmed anyone, not even verbally. He was honorable through and through. And he promised to love her forever.

A tear rolled down her cheek and she rubbed it away. “Thank you.”

Ben leaned his elbows on the table and bent closer to her. “Are you sure you want to answer our questions? We can wait for a better time.”

Katie pondered her answer. If she delayed them, they’d resurrect more pain. The better choice seemed to give them what they wanted now since her heart and soul were numb. “Now is fine.”

Ben gave her a small smile. It quickly disappeared when Charles stepped back into the room with a white Styrofoam cup in his hand.

“Thank you,” Katie said as she took the drink from him.

“Are we ready?” Charles asked, his gaze pointed at Ben as he sat in the chair.

“I think so.” Ben pushed on the tip of the pen with his thumb and it made a clicking sound. He met Katie’s eyes. “Where were you tonight?”

Katie sipped her water, then set the cup down. “I had to run an errand for Kyle. He ordered something and asked me to pick it up at the South Bend airport.”

Charles crossed his legs. “What kind of package?”

“I don’t know. It’s FedEx, so it’s probably for me.” A lump formed in her throat. How many times had he ordered sexy lingerie for her and given it as a gift? Too many. The man consistently went out of his way to make her happy. She swallowed, pushing the lump back down her throat. “He liked to surprise me with gifts.”

“Did you do that often?” Charles asked. “I didn’t think you could pick up packages at the airport.”

“Yes, he…” She paused to clear the scratchiness from her voice. “He knew a couple people there. They’d call him and he’d either get it or send me to retrieve the package.”

“And who did you talk to tonight to get this package?” Ben asked as he wrote.

Katie nodded. “Yeah.” Mishawaka wasn’t a small town where everyone knew everything, but the people who ended up in trouble with the law always made lasting impressions. Stanley was one of them.

“Is the package in your car?” Charles asked.

Charles looked at Ben. “I think we should check it out.”

Ben inhaled a deep breath as he finished writing, then lifted his eyes. “Would you be opposed to us taking a dog to sniff around your vehicle?”