Read Immortal Sacrifice: #4 The Curse of the Templars Online

Immortal Sacrifice: #4 The Curse of the Templars 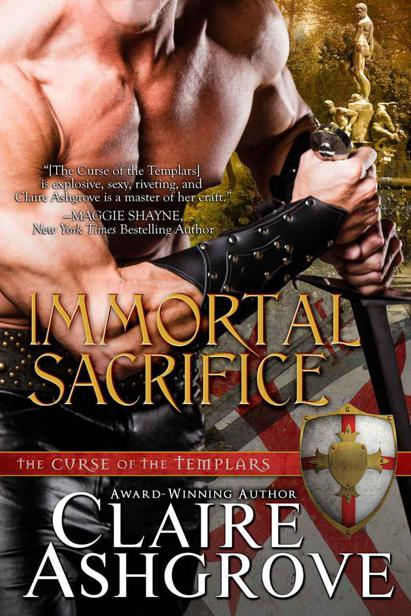 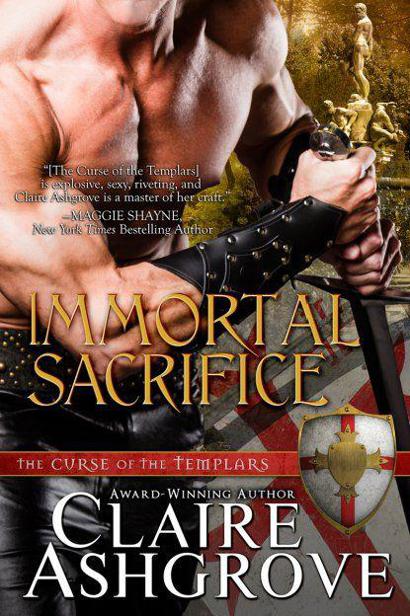 Too long s
he’d known this only in memory. Too long she’d relied on distant sensations to nurse her soul-deep yearning. But now it was real. Caradoc was here. Kissing her as if nothing had changed between them and they were once more locked away in a cottage in England, lovers who couldn’t get enough of one another.

The slide of his hand along the length of her spine stirred her he
artbeat into an erratic rhythm. Each staccato pulse shot zings of ecstasy to every nerve ending she possessed until they all stood on end and her body trembled with sensory overload. His powerful arms surrounded her. His mouth dominated. His broad chest offered shelter from every catastrophe she could imagine.

She couldn’t g
et enough. Hungered for every bit of raw emotion that Caradoc had once exposed her to. Craved the feel of his skin sliding against hers, the sensation of taking him into her body and knowing him only as a lover could. She squirmed against the building ache within her womb and gave in to a soft moan.

The sound, however, jolted her back to reality, and the harsh realism sent her crashing through ecstasy to land in a bruise
d heap on the cold hard truth. This wasn’t the man who made her believe in dreams and fairytales. This was the man who’d sworn his love then left her to wake up confused and alone.

Isabe
lle shoved out of his embrace. “I’m not doing this,” she rasped. Not in a hundred years. Make that a hundred centuries.

She straightened her skirt then bent over to pick up her purse that had landed o
n the floor some time earlier. Slinging it over her shoulder, she bolted for the door.

“Isabelle, wait!”
Caradoc caught up with her in four determined strides. His fingers wrapped around her wrist. “I did not mean for that to happen.”

“Of course not!”
She gave her arm a fierce jerk at the same time she opened the door. “You didn’t mean it before, why should you now?”

The
Curse of the Templars

This is a work of fiction. Names, characters, places and incidents are either the product of the author’s imagination or are used fictitiously. Any resemblance to actual persons, living or dead, business establishments, events, or locales is entirely coincidental.

Immortal Sacrifice: The Curse of the Templars

No part of this book may be reproduced, copied, stored, scanned, transmitted or distributed in any form or by any means, including but not limited to mechanical, printed, or electronic form, without prior written permission of the author. Please do not participate in or encourage piracy of copyrighted materials in violation of the author’s rights.

To my wonderful boys, Garrett and Pierce.

Thank you for making my life beautiful.

Curse of the Templars Books

In 1119, nine knights rode with Hughes de Payens to the Holy Land, becoming the Knights Templar. All were bound by marriage or blood. Eight were recorded over time. The ninth vanished into history.

Beneath the legendary
Temple Mount, the knights uncovered holy relics, including the Copper Scroll—a document written by Azazel’s unholy hand. For their forbidden digging, the archangels exacted a sacrifice. The knights would spend eternity battling the demons of Azazel’s creation, but with each vile death they claimed, a portion of darkness would enter their soul. In time, they would transform into Knights of Azazel, warriors veined with evil, destined to fight against the Almighty.

Yet an ancient prophecy remained to give them hope. When darkness raped the land, the seraphs would return. Female descendants of the Nephilim would carry the light to heal their dying souls.

Centuries have passed. Azazel’s might grows to intolerable limits. With the acquisition of eight holy relics, he will gain the power to overthrow the Almighty.

Six Templars stand above the rest in duty, honor, and loyalty. But each is haunted by a tragic past, and their darkened souls rapidly near the end. As they battle both the overwhelming power of evil and the nightmares of lives they left behind, the seraphs are more than tools to victory.

Supernatural Transformation: Change Your Heart Into God’s Heart by Guillermo Maldonado
Echoes of a Promise by Ashleigh Bingham
Invasive Species Part One by Daniel J. Kirk
The Measure of the Magic by Terry Brooks
Something Bad by RICHARD SATTERLIE
Wyvern's Prince (The Dragons of Incendium Book 2) by Deborah Cooke
299 Days VIII: The War by Glen Tate
Raina's Story by McDaniel, Lurlene
Midnight Mistletoe (A Paranormal Romance) (Golden Pack Alphas) by Cremant, Laurel
They Never Die Quietly (2010) by Annechino, D M
Our partner