Read In a Class of Their Own Online

In a Class of Their Own 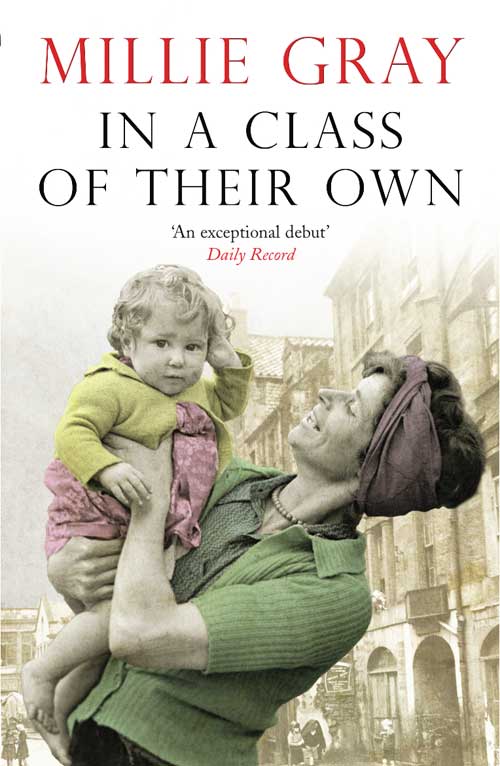 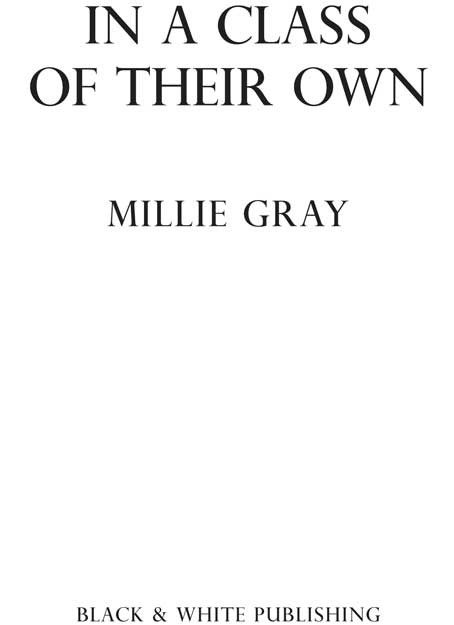 To my husband Bob

Chapter   5
The Art of Survival

Chapter   8
All Straightened Out

Chapter 10
Aiming for the Skies

Chapter 12
Let there be Light

Chapter 13
Giving up the Ghost

This story tells of one family's life in Leith in the years before, during and after the Second World War. Although it echoes some of the writer's experiences and personal feelings, the characters portrayed in the book are wholly fictitious and bear no relation to any persons, living or dead. Many of the street names, localities and other details from that period in Leith's history have been preserved however.

“We’re here, Sam,” Carrie called out. Her brother, who had been so busy making sure that his legs didn’t buckle under him, slowed to a halt once he discovered that he had run right past the big, highly-polished door with its gleaming brass plate that said:
Edinburgh Corporation Housing Department.

Sam trotted back obediently to where his mother, Rachel, was busy straightening baby Paul’s legs after having lifted Carrie out of the foot of the pram. He shrugged stoically at not having had his usual turn of getting a hurl in the pram. Obviously his mother had been preoccupied ever since they had left home in Leith and he’d wisely resisted the impulse to remind her that a four-year-old found it wearying to run for ninety minutes non-stop through all that teeming rain and driving wind. Sam knew full well that this was a Monday, the day when Mam
had
to be at the Housing Office before the door opened; but that didn’t stop him making his customary plaintive query, “Mammy, why’ve we come here?”

Rachel turned abruptly to look at Sam as if she hadn’t known he was there.

“Sam!” she said in exasperation. “You ask the same bleeding question every week and the answer I give you is the same bleeding answer, week in and week out. We’re here because I want you and Carrie to go to a good school when you start in April next year.”

Sam sniffed, lifting his hand to wipe away the water that was dripping steadily from his hair and tickling his nose. “But, Mam,” he whined, pointing to the brass plate, “ye telt me it says there,
‘Hoosing
Department’.”

His mother glanced at the storm-tossed heavens for a second before muttering through clenched teeth, “Aye, that’s right, Sam. We’re here cos I’m aiming to get us a good address. That means that the schools there will be very good as well.”

“Nae like the Ragged School you and your sister will have to go to if we can’t get out of Admiralty Street.”

“But Mammy,” Carrie butted in, “our Hannah says Couper Street is a guid school and
she
kens aw her readin’ and coontin’.”

Rachel turned on her daughter, who had taken off her hat so that the rain could plaster her fair curls tight to her skull. “Carrie,” she said with exasperation as she grabbed the hat and rammed it back on. “The words are ‘reading’ and ‘counting’; and the reason Hannah does very well at Couper Street is all due to her being so clever and streets ahead of the rest.”

But to herself she muttered: “Nae like you pair. Lord, gie me patience. Only just turned four an’ they baith argue black’s white an’ syne turn it black again.”

She sighed audibly, reflecting that, even although the midwife had explained how they
couldn’t
be identical twins, they certainly were in
her
estimation. They had the same thrawn natures; the same fair, red-tinted curls (though Carrie’s were less fiery than Sam’s); the same snub nose; the same big eyes – except Sam’s were blue and Carrie’s were … Rachel shook her head wearily, thinking that if one of them
had
to have such bad squints, why couldn’t it have been Sam? Cross-eyes make even the prettiest girl look – and she gulped before mentally changing
ugly
to
different.

But doing something about Carrie’s eyes would have to wait. The most important thing was whether their long, rain-sodden trek to the Housing Office would bring the result she so dearly wished for. In spite of the depressing weather, she felt momentarily buoyed up with confidence. Then, as the wind tore at her face and the rain began to turn to sleet, she acknowledged to herself that they were such buggers in the Office here that it could well take a good few weeks more before she could really wear them down. The noise of the door being opened suddenly broke into Rachel’s thoughts.

“You again?” grunted the janitor. “Every effing Monday for a hale year I’ve opened up this door and found you lot.” He stuck his hand out to decide if it was raining or not. “Ye nae got a bed ti bide in wi’ weather like this?”

“I’m no layabout,” declared Rachel. “And before you go on, no, I haven’t got money to throw away on buses either.”

What an ass that man was, she thought, to be putting his hand out like that to feel if it was raining! Anyone could see it was simply lashing down. Then she noticed Sam and Carrie were both trying to climb into the pram at the same time. “Here! What d’you two bairns think you’re at? Now, just stand there by that pram. And don’t let nobody – and I mean nobody – touch it till I come back. Understand?”

Sam and Carrie both nodded so vigorously that spray from their drenched heads cascaded over their mother. Satisfied that neither would move and that baby Paul would be safe, Rachel climbed the five steps to the Housing Office, simultaneously pushing back her nut-brown hair and hastily brushing the drips from her faded coat.

“Wish I wasnae so down-at-heel,” she said to herself.

In reality, Rachel had no need to worry unduly about her appearance. Thanks to Eugenie Fraser’s coaching, she always walked with a stately, almost regal air that seemed to add inches to her stature. Rachel had been only thirteen when she’d first gone to work, as a teenie, at Miss Fraser’s elegant New Town mansion in Moray Place. From the very start, Eugenie had taken a personal interest in the young girl and, after only six months’ training, had promoted her from scullery-maid to upstairs duties where she quickly learned to welcome visitors and wait upon the guests. When mistress and servant were alone together, Eugenie would patiently instruct Rachel on how to speak the King’s English correctly, how to walk with head held high and how to make the most of her personal appearance – of which her gleaming green eyes were by no means the least of her striking features.

“Rachel, my dear,” Eugenie would say, “I can’t possibly imagine how a little gem like you managed to pick the parents you have! But never mind, you have good looks, some brains and that
je
ne sais quoi
that we all wish we had – the capacity to look genteel even when dressed in a coal sack.”

The memory of those encouraging words always made Rachel smile: Eugenie’s attitude had stemmed from having been a suffragette possessed with the fervent desire to improve the lot of all women. She had wanted to make others of her sex realise they all had the potential to become more than mere chattels of men.

“All very well for you, Eugenie,” chuckled Rachel to herself. “Your father died leaving all his money to you. So you never had to see a coal sack, let alone wear one.”

At that moment the receptionist – an officious old maid – broke abruptly into Rachel’s reminiscences with an imperious click of the fingers.

“And what can we do for you today?” she demanded sourly as Rachel planted her rent book on the counter. “I know you have a clear rent book, Mrs Campbell, but, as I have already explained more than once to you, we can only offer you re-housing to the North of the City, along with all the other Leith slum clearance families in Admiralty, East and West Cromwell Streets; and …”

“… And as I have already explained to
you,
sixty times over,” Rachel broke in, “I’m not going to the North. I wish to be re-housed in the East.”

“The East of the City?” said the receptionist incredulously, lifting her mascara-laden eyes to the ceiling.

“That’s right. The
East
of the City. And in particular, the estate across Leith Links and up beyond Restalrig Brae.”

The woman sighed and this time scrutinised her enamelled fingernails as if only then becoming aware of them. “I don’t think, Mrs Campbell, that you quite understand. We have
no
vacancies in that area. Besides, all our tenants there are most carefully vetted.”

“You telling me I’m not good enough to go there?” retorted Rachel with fury. She leaned threateningly across the counter as if to grab the woman’s throat but halted suddenly, remembering Eugenie’s warning that a lady must
never
let herself down in public. If one gave way to anger, the battle was lost.

But the receptionist had seen the danger and drew back. “No, n-n-no,” she stammered. “What I’m saying is that the tenants there are all hand-picked so they will all fit in properly.”

“Fit in? And what exactly do you mean by ‘fit in’?” demanded Rachel fiercely.

“Er … just that they all have to be … er … you know, be in the same class.” She paused before adding, “I mean, I don’t think anybody from the Leith slums could imagine …”

“I beg your pardon!” Before Rachel could launch into a tirade against this pen-pushing bureaucrat, she caught sight of Councillor Smith sidling along the wall towards the Council Chambers.

“One moment, Councillor Smith,” she called out.

“Fine you know, Councillor Smith. It’s the same old thing I see you about every week. This here’s my rent book and it’s never been in arrears these past two years. All I want is to be re-housed in the Restalrig district.”

“Yes, I realise you do but, as I’ve already explained to you, we have to look at prospective tenants and the available vacancies. Unfortunately at this precise moment we have no vacancies in Restalrig.”

Rachel drew a deep breath before allowing a sly smile to cross her face. “Oh, but you
have,”
she gently intoned.

“Oh yes. You see, the bairns an’ me took a walk up there yesterday. Just for a wander. And guess what we found!” She paused, relishing the moment. “An
empty house
!
In Learig Close. You know, the close on the left of Restalrig Brae, just before the railway bridge.”

“Aye, where your four-in-a-block houses are on one side of the street and the private-owned ones on the other.”

“Oh,
that
Learig Close,” the Councillor exclaimed, before collecting himself and proceeding in a conciliatory manner. “Now, correct me if I’m wrong, Mrs Campbell, but are you saying you wish to be re-housed in Learig Close?”

“Well,” he paused. “I don’t know. We would need to look at where you are on the list and then … er … could you maybe … perhaps … make out a special case for yourself?”

“Special case?” said Rachel. “Well, I don’t think there can be anyone more entitled to be re-housed than me.”

Councillor Smith smiled patronisingly, which only served to infuriate Rachel. She swallowed hard and pulled herself up to her full five feet four inches before continuing.