Read In Blood and Worth Loving 2: Lost Without You Online

In Blood and Worth Loving 2: Lost Without You 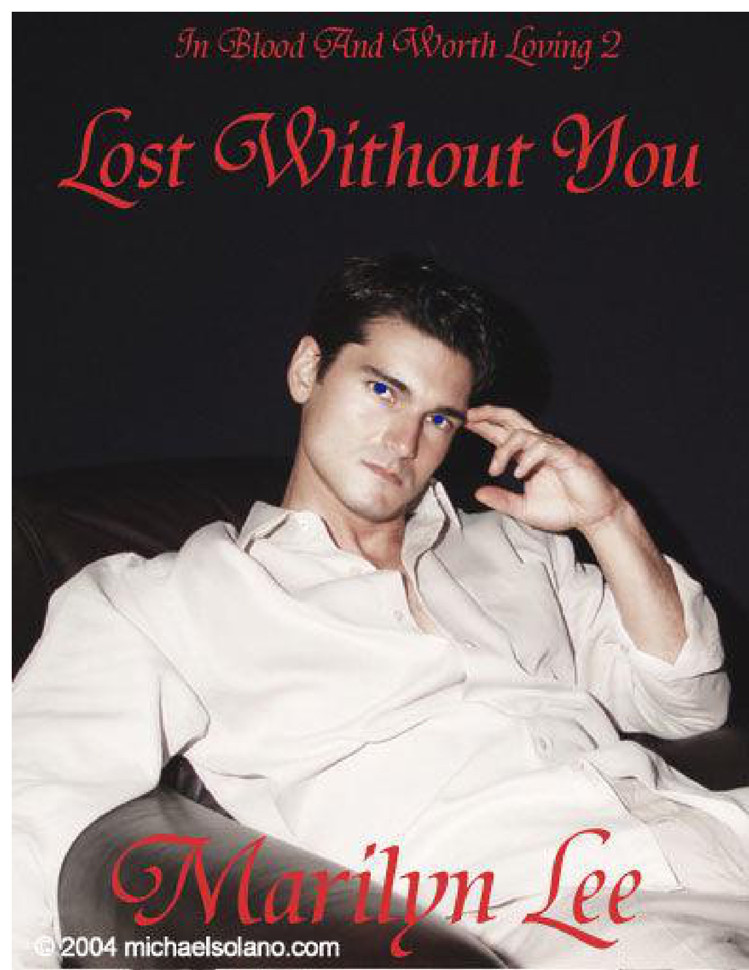 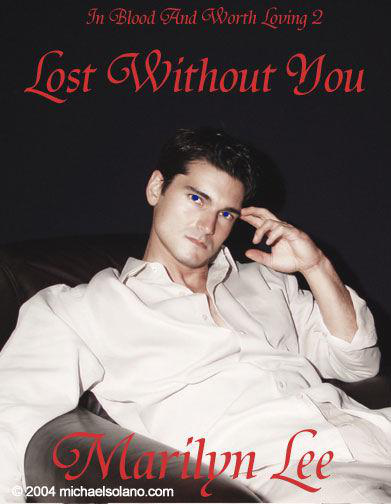 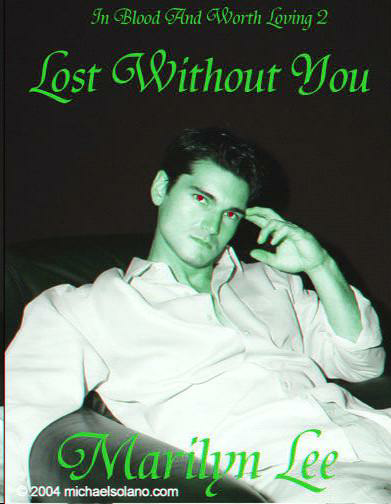 In Blood And Worth Loving 2—Lost Without You

This is a work of fiction. Names, characters, places, and incidents are products of the author’s imagination or are used fictitiously and are not to be construed as real. All service marks, registered trademarks, and registered service marks are the property of their respective owners and are used herein for identification purposes only.

Seated alone at a table for two, Jayvyn Redwolfe tore his gaze from the pretty, buxom brunette he’d spent the last fifteen minutes watching slow dance. He turned his attention back to the woman who stood to his left.

The dim club lighting presented no obstacle to his giving her a swift but thorough inspection. Around 5’5”, she had dark hair and eyes, full lips, nice sized breasts and beautiful skin the color of milk chocolate. Although surrounded by women other men might consider more attractive, she gave him a slow, confident smile that sent a surprising rush of excitement through him.

Maybe he wouldn’t regret having allowed Rayna to talk him into accompanying her for a night of clubbing after all. Abandoning his half-formed plan to ask the brunette to dance, he rose and moved around the table to pull out the chair opposite his. “I insist you do.”

She gave him a sexy smile. “Then I’d better sit down.”

As she sat, her soft, subtle perfume filled his nostrils. Suppressing an almost primal urge to bend his head and inhale her scent, he returned to his chair to give her his full attention. And she was certainly worth a second look with her warm brown eyes, enchanting smile, and her absolutely alluring neck.

She placed a hand on her throat. “You’re staring at my neck. Is something stuck here?” It was too early in the game to reveal his hunger. He flashed a quick smile while shaking his head. “No.” She placed her hand back on the table, exposing her lovely neck again.

Jayvyn made an effort not to stare at the delectable region below her head. He glanced at the half-empty glass she’d placed on the table to her right. “Would you like another drink?”

“Thanks but any more than this and—”

“And I become wild and unmanageable.”

“Really?” He smiled. “Then by all means have another.”

She arched a brow. “And make a spectacle of myself?”

He leaned forward and spoke in a sotto conspiratorial voice. “I promise not to tell anyone if you do.” He watched yet another slow, sensual smile curve her luscious lips in response. “That’s a very generous offer.” He smiled. “I’m a very generous guy.”

“Even so, for the sake of my reputation, I think I’d better stick to my limit.” Too bad. He glanced at her bare left hand. “Are you here alone?” She shook her head. “I’m with friends. We made the mistake of starting to dance as soon as we arrived. Now that we’re ready for a short break, we split up to look for seats to rest before dancing some more of the night away.”

“Are your friends male or female?”

She arched a brow. “I’m starting to feel as if I’m being cross-examined.”
Maybe because you are.
He flashed a brief smile. “Just friends?” he asked again.

A frown furrowed her brow before she gave him a surprised look as if she expected him to already know the answer to the question. Finally, she shrugged. “We’re here as couples meeting a few other friends.” She lifted her glass to her slightly parted lips.

Her mouth looked soft and deliciously kissable.
Couples? Damn.
“So that wasn’t a pickup line?” She moistened her lips. “A pickup…you mean you thought I was coming onto you?”

She tilted her head. “You ask that as if you’re used to women trying to pick you up.”

“At the risk of sounding conceited, I am.”

“Trust me. It does sound conceited.”

“Trust me. It does sound conceited.”

His lips twitched with suppressed amusement. “Maybe so, but I know when a woman is flirting with me.”

“Okay. Maybe I was flirting a little—”

“Okay. Maybe I flirted a little more than I should have.”

“But?” He encouraged when she abruptly ended her sentence. “Go on.”

“Girls?” She appeared to be in her early thirties. “You don’t object to the term girl?” She shook her head, a smile tugging at the corners of her mouth. “The older I get the less I object.” A human woman who didn’t take herself too seriously. Rare and interesting. And intriguing.

“Before you misunderstand, I should point out I’m here with my date.” Lucky bastard. “You’re on a girls’ night out with a guy in tow?” Her lips twitched. “You make it sound worse than it is.”

“We have a unique relationship.”

She gave him an annoyed look. “I know the difference between kinky and unique. I said unique and that’s what I meant.”

“Ah. A woman who knows what she wants.”

“Damn right I know what I want.”

She might know what she wanted, but did she know what was good for her? “And it’s him?”

“Yes. You have a problem with that?”

She gave him a cool look. “Never mind. I really am sorry if I misled you.” Her gaze revealed no deception. Her voice betrayed no insincerity. Damn his luck. The first woman to excite him in years had plans for her Friday night that didn’t include him. “So you were just toying with me?”

“Of course not. I don’t toy with other people’s emotions.”

Emotions? Where the hell did she get off thinking she’d managed to toy with his emotions within the space of the few minutes they’d been talking? “Then?”

She glanced around, as if looking for someone before she met his gaze again. “This was a bad idea.” Not from his standpoint.

He rose, staring across the table to lock his gaze with hers. The impulse to will her to remain proved difficult.

But fifty years of living with Rayna had taught him how unpredictable human women were. The more a man tried to bind them, the more they struggled to be free.

She sucked in a breath, looked away from him, and shook her head. “Sorry I imposed on you.” Her soft, sensual voice stroked his passions. He walked around the table to look down into her eyes, managing to resist the temptation to lean down and brushed his lips against her lovely neck. “What’s your name?”

“I have a date for the night,” she reminded him. “And I’m not looking for other entanglements at the moment.”

“That this date of yours is so controlling he doesn’t allow you to even mention your name to other men.” He watched her lips compress and her dark gaze narrow. “You’re wrong if you think he or any other man controls me!”

“And is it an appropriate name for you?”

A slow, sexy smile spread across her face. “I still have my moments.” He glanced at her neck. She filled the night with exciting possibilities. “Do you come here often, Cayenne?”

“Do you?” she countered.

“Why do I get the impression that if I say yes you’ll never come here again?” She laughed. Her laughter, like her smile, was warm and seductive.

“Do you come here often?” he asked again.

“When I’m feeling tense, I like to dance. I’ve been here a few times when I felt the need to unwind.”

“Always with the lucky bastard in tow?”

She sighed. “I don’t think he considers himself particularly lucky.”

“Then why are you dragging his sorry ass around?”

She frowned. “I thought you understood.”

“You thought I understood what?”

“That I want him back. You did agree to help me get him back. Didn’t you?” Rayna! Damn it. It would be a cold damned day in hell when he did anything to aid her getting back with a man who didn’t appreciate her. “If he doesn’t want you, fuck him.”

“Why not? Don’t you think you deserve more than an asshole who doesn’t appreciate you?”

She compressed her lips. “There isn’t one.”

“Isn’t there?” he challenged.

She sighed. “Haven’t you ever wanted someone who didn’t want you anymore?” The bastard didn’t want her? “Not lately.”

“Then consider yourself lucky.”

The ache he heard in her voice touched a nerve. He softened his voice when he spoke again. “It stings?”

He brushed his hand against hers. “It will pass, sweet.” The endearment, the equivalent of which he’d only ever used with one other woman, tumbled from his lips.

He inhaled slowly. What idiot had hurt her and made her look and sound so wounded? “Is he married?” She shook her head. “Not anymore he’s not.”

She laughed. “I must have had too much to drink already. You’re so easy to talk to; I’m standing here telling my troubles to a complete stranger.”

Rather than feeling like a stranger, she felt like someone he had ached to meet since he’d lost the only woman he’d ever loved.

He shook his head. “Don’t be sorry. Let me buy you a drink and you can get it all off your chest.” For a moment, he saw a look of acceptance in her dark, beautiful gaze. Then she abruptly shook her head and stepped away from him. “Thanks for the offer, but I’ve had my limit.”

“Then we can just talk or you can talk and I’ll listen and offer silent sympathy.”

“You have no idea how much I’d like to accept, but—”

She shook her head. “I’d better go find my friends.”

“And the lucky bastard?”

She shrugged. “I came with him.”

“That doesn’t mean you have to leave with him.”

“That doesn’t mean you have to leave with him.”

She frowned. “I want to leave with him.”

But not for long if, he had anything to say about it. “Then he is lucky.” She smiled. “I think you mean that as a compliment.”

“Before you do, will you come here again?”