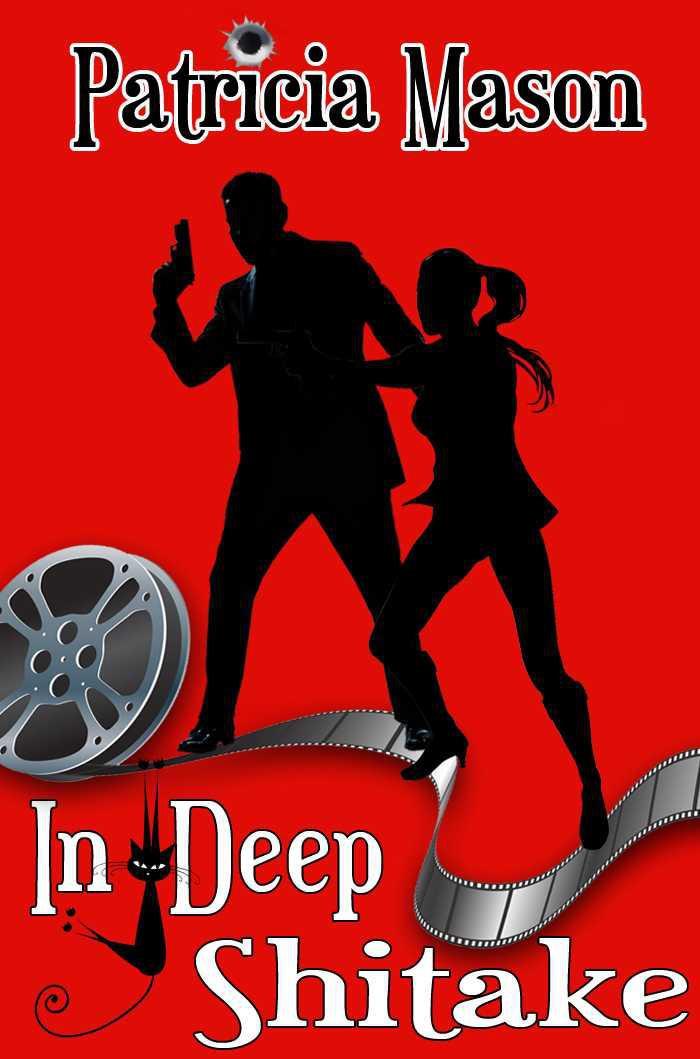 Praise for
IN DEEP SHITAKE

“A case of mistaken identity turns into a fun, fast paced romp ... Once you pick up this great story, you won’t be able to put it down."

Add one outrageously sexy female private eye with a penchant for food-word obscenities.

Mix in a dose of mistaken identity and a handful of Russian mobsters...And they're all
In Deep Shitake.

"This book was fantastic...a must read" -- The Romance Studio (about A Girl, A Guy and A Ghost).

"An intriguingly beautiful paranormal romance that will have readers longing for more." --Night Owl Reviews (about A Girl, A Guy and A Ghost).

"This is a wonderful story and I hope to read more from Ms. Mason and soon!" -- The Pen & Muse (about Sacrifice in Stone)

"What an awesome story!" -- JER Reviews (about Undisclosed Desires).

A locked car is like a chastity belt. There may be a way in if you don't have the key, but you can be sure it's going to be painful.

The fortune cookie's advice from long ago flickered through Mo's mind as she contemplated her assignment: break into a certain Mercedes sedan and take note of the information found inside. The car in question was parallel parked on a public street in the historic downtown of Savannah, Georgia. Being locked, the Mercedes' half-open sunroof seemed Mo's only option for entry.

She scanned her surroundings. The antebellum row houses that typified the downtown loomed four stories high on both sides of the street. This was one of the city's most scenic neighborhoods, with its cobblestones and the canopy of trees linking branches overhead.

Mo didn't see anyone around. Ten p.m. on the Tuesday before St. Patrick's Day— a big tourist attraction—was rarely calm. But tonight's stillness was good for her purpose. Only the chigger bugs in the Spanish moss hanging from the live oak trees would see her if she leaned in through the car's sunroof to unlock a door.

After a few more seconds of hesitation, Mo decided to go for it. Failure in her assignment meant termination from the private investigation firm and that wasn’t an option she could consider given her current money woes.

The skin-tight, purple dress she wore wasn't exactly conducive to car B&E. The outfit was intended for a honey trap assignment, to catch a client's cheating husband, scheduled for later that night. Nevertheless, Mo toed off her high heels, hiked up her skirt a bit more, and hopped onto the car’s hood. Inching through the sunroof face-first, she dropped her purse onto the passenger seat. When Mo stretched her arm toward the door, she found the power lock switch tantalizingly out of her grasp.

If I just lean in a little more
, she thought,
I can reach it
.

Grabbing the steering wheel, Mo allowed her body to slide inside. But before she closed the necessary distance to the door handle, her body jerked to a stop.

She was wedged, face-first and bottom-up, with her top half trapped inside the car and her lower half draped over its windshield.

Her waistband had snagged on some unseen piece of car trim. She twisted her body this way and that, forward and back, causing the skirt part of the dress to bunch into an uncomfortable knot around her belly. Mo's behind, covered only by lacy black panties, lay exposed to the night air.

At least I'm not wearing a thong
, she thought, grasping for something to be positive about.

The gunk under her right toe on the windshield was positive also...positively bug guts.

As she hung there, Mo's phone pinged a message alert. Her purse had landed on the car seat with its flap open and Mo could see the face of the cell lying atop its contents. A notification of a text from her brother, Leo, with his signature tongue-out smiley-face emoticon taunted her. If only she could reach that cell. Leo would tease her mercilessly about this from now until the end of time, but at least he would help her.

Just then a sound in the distance interrupted her thoughts. A sound dreaded by all women stuck in a sunroof: footsteps.

Ross had just woven his way around a group of tourists waiting to board a ghost tour trolley when the cell phone rang in his pocket. Touching the button of the Bluetooth device in his ear, he answered, “Ross Grant,” without breaking his stride down the sidewalk.

“This is your only warning,” a menacing voice said from the other end of the phone.

“Aaron.” Ross gave a husky chuckle, turned left and strode on. “Quit being such a
tosser
, mate.”

When he reached the end of the block and paused to consider what direction to take, the warm night air carried a slight hint of jasmine scent from the nearby bush. Ross barely noticed his surroundings. He wasn't here to be a tourist or to enjoy the weather.

“I don’t know what a
tosser
is. Why don’t you insult me in American English? You haven’t lived in Britain for ten years,” Aaron replied. “Besides, I think my thug voice is pretty good.”

Ross chuckled. “Okay. You’re a miracle worker. What miracle have you worked for my career today?” He could use divine intervention to break free of the super spy action hero typecasting he'd been mired in for the last ten years. Forty wasn't old. His career could skyrocket if people would just forget about
SpyMatrix
.

“I just snagged an offer for you to do a musical,” Aaron said.

“Really?” Ross’s eyebrows arched as a thrill of excitement shot through him. Maybe Aaron had earned his fifteen percent this week. A musical would be a huge departure from what he'd been offered lately. “Broadway? Film?”

“Someone wants me to sing on stage in Japan?” Not ideal. But he could work with anything if given a chance.

There was a moment of silence before Aaron said, “In a Japanese commercial.”

Had he just thought he could work with anything? Think again.

“No, Aaron. No way.” Ross stopped walking. “I didn’t attend the Royal Shakespeare Academy to sing in a commercial. And a Japanese commercial at that.”

“Technically you wouldn’t be singing,” Aaron said. “The toilet would sing.”

Groaning and trying to repress the feelings of humiliation that bubbled up, Ross started walking again. “I’m not that desperate yet. Thanks very much.”

“Then you’d better make sure that Savannah producer is
gonna
come through with the bucks for the film you want to direct.” Aaron's bark sounded particularly harsh across the cell.

“I’m on the way to meet with him right now.”

“Good...Oh. I want to warn you about that asshole tabloid reporter, Stewart Milton," Aaron continued. "The one who’s been writing all the crap about you."

"What about him?" Ross asked, turning right to head down another block, this one lined with town home-style, Victorian-era homes.

"He flew out of L.A. for Savannah yesterday.”

“Why? Aren’t there enough celebrities in L.A. for him to harass?”

“Yeah, but he’s after you buddy-boy,” Aaron answered. “The word going around is that he has a personal grudge against you.”

“You slept with his wife.”

“I haven’t slept with anyone’s wife,” Ross shouted then glanced around him and lowered his voice. “I think I’d remember.”

“That was six years ago. And she wasn’t involved with anyone when we dated.” Shaking his head, Ross stepped over a gap in the bricks of the sidewalk. All he needed now was to break a leg. “Ridiculous.”

“Yeah, I agree. But, apparently, she can’t forget you and the guy is jealous.”

“Out of curiosity, would I be sitting on the toilet while it’s singing?” Ross asked.