Read In Favor of the Sensitive Man and Other Essays (Original Harvest Book; Hb333) Online

In Favor of the Sensitive Man and Other Essays (Original Harvest Book; Hb333) 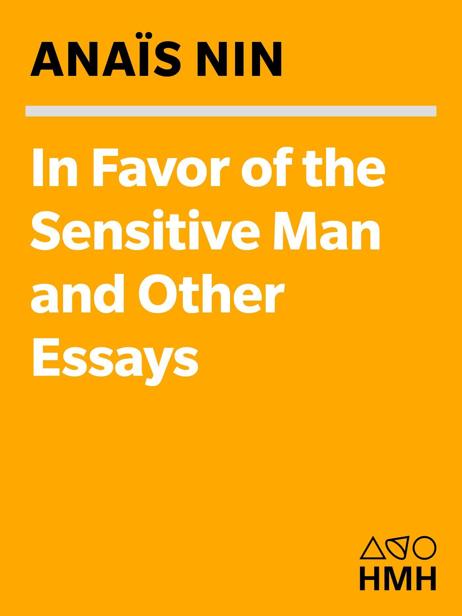 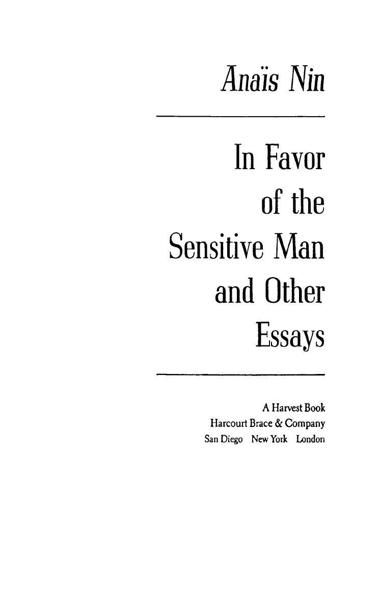 Anaïs Nin Talks About Being a Woman: An Interview

My Sister, My Spouse

Between Me and Life

Women and Children of Japan

In Favor of the Sensitive Man

On Truth and Reality

The Story of My Printing Press

Out of the Labyrinth: An Interview

Angel in the Forest

At a Journal Workshop

Henry Jaglom: Magician of the Film

The Labyrinthine City of Fez

The Spirit of Bali

In favor of the sensitive man and other essays.

WOMEN AND MEN
Eroticism in Women

From my personal observation, I would say that woman has not made the separation between love and sensuality which man has made. The two are usually combined in woman; she needs either to love the man she gives herself to or to be loved by him. After lovemaking, she seems to need the assurance that it is love and that the act of sexual possession is part of an exchange which is dictated by love. Men complain that women demand reassurance or expressions of love. The Japanese recognized this need, and in ancient times it was an absolute rule that after a night of lovemaking, the man had to produce a poem and have it delivered to his love before she awakened. What was this but the linking of lovemaking to love?

I believe women still mind a precipitated departure, a lack of acknowledgement of the ritual which has taken place; they still need the words, the telephone call, the letter, the gestures which make the sensual act a particular one, not anonymous and purely sexual.

This may or may not disappear in modern woman, intent on denying all of her past selves, and she may achieve this separation of sex and love which, to my belief, diminishes pleasure and reduces the heightened quality of lovemaking. For lovemaking is enhanced, heightened, intensified by its emotional content. You might compare the difference to a solo player and the vast reaches of an orchestra.

We are all engaged in the task of peeling off the false selves, the programmed selves, the selves created by our families, our culture, our religions. It is an enormous task because the history of women has been as incompletely told as the history of the blacks. Facts have been obscured. Some cultures such as the Indian, Cambodian, Chinese, and Japanese have made their sensual life very accessible and familiar through their male artists. But many times, when women have wanted to reveal the facets of their sensuality, they have been suppressed. Not in as obvious a way as the burning of D. H. Lawrence’s works, or the banning of Henry Miller or James Joyce, but in one long, continuous disparagement by the critics. Many women resorted to using men’s names for their work to bypass prejudice. Only a few years ago, Violette Leduc wrote the most explicit, eloquent, moving descriptions of love between women. She was introduced to her public by Simone de Beauvoir. Yet every review I read was a moral judgment upon her openness. There was no moral judgment passed upon the behavior of Henry Miller’s characters, merely an objection to language. In the case of Violette Leduc it was upon the character herself.

Isabelle pulled me backwards, she laid me down on the eiderdown, she raised me up, she kept me in her arms: she was taking me out of a world where I had never lived so that she could launch me into a world I had not yet reached; the lips opened mine a little, they moistened my teeth. The too fleshy tongue frightened me; but the strange virility didn’t force its way in. Absently, calmly, I waited. The lips roved over my lips. My heart was beating too hard and I wanted to prolong the sweetness of the imprint, the new experience brushing at my lips. Isabelle is kissing me, I said to myself. She was tracing a circle around my mouth, she was encircling the disturbance, she laid a cool kiss in each corner, two staccato notes of music on my lips; then her mouth pressed against mine once more, hibernating there. . . . We were still hugging each other, we both wanted to be swallowed up by the other. . . . As Isabelle lay crushed over my gaping heart I wanted to feel her enter it. She taught me to open into flower. . . . Her tongue, her little flame, softened my muscles, my flesh. . . . A flower opened in every pore of my skin. . . .

We have to shed self-consciousness. Women will have to shed their imitation of Henry Miller. It is all very well to treat sensuality with humor, with caricature, with bawdiness, but that is another way of relegating it to the casual, unimportant areas of experience.

Women have been discouraged from revealing their sensual nature. When I wrote
Spy in the House of Love
in 1954, serious critics called Sabina a nymphomaniac. The story of Sabina is that in ten years of married life, she had known two lovers and one platonic friendship with a homosexual. It was the first study of a woman who tries to separate love from sensuality as man does, to seek sensual freedom. It was termed pornographic at the time. One of the “pornographic” passages:

They fled from the eyes of the world, the singer’s prophetic, harsh, ovarian prologues. Down the rusty bars of ladders to the undergrounds of the night propitious to the first man and woman at the beginning of the world, where there were no words by which to possess each other, no music for serenades, no presents to court with, no tournaments to impress and force a yielding, no secondary instruments, no adornments, necklaces, crowns to subdue, but only one ritual, a joyous, joyous, joyous, joyous impaling of woman on man’s sensual mast.

Another passage from
Spy,
labeled pornographic by the critics:

His caresses were so delicate that they were almost like a teasing, an evanescent challenge which she feared to respond to as it might vanish. His fingers teased her, and withdrew when they had aroused her, his mouth teased her and then eluded hers, his face and body came so near, espoused her every limb, and then slid away into the darkness. He would seek every curve and nook he could exert the pressure of his warm slender body against and suddenly lie still, leaving her in suspense. When he took her mouth he moved away from her hands, when she answered the pressure of his thighs, he ceased to exert it. Nowhere would he allow a long enough fusion, but tasting every embrace, every area of her body and then deserting it, as if to ignite only and then elude the final welding. A teasing, warm, trembling, elusive short circuit of the senses as mobile and restless as he had been all day, and here at night, with the street lamp revealing their nudity but not his eyes, she was roused to an almost unbearable expectation of pleasure. He had made of her body a bush of roses of Sharon, exfoliating pollen, each prepared for delight.

So long delayed, so long teased that when possession came it avenged the waiting by a long, prolonged, deep thrusting ecstasy.

Women through their confessions reveal a persistent repression. In the diary of George Sand we come upon this incident: Zola courted her and obtained a night of lovemaking. Because she revealed herself as completely unleashed sensually, he placed money on the night table when he left, implying that a passionate woman was a prostitute.

There is common agreement about only one thing, that woman’s erogenous zones are spread all over her body, that she is more sensitive to caresses, and that her sensuality is rarely as direct, as immediate as man’s. There is an atmosphere of vibrations which need to be awakened and have repercussions on the final arousal.

The feminist Kate Millett is unjust to Lawrence. Whatever he asserted ideologically, she was not subtle enough to see that in his work, which is where the true self is revealed, he was very concerned with the response of woman.

My favorite passage is from
Lady Chatterley’s Lover:

Then as he began to move, in the sudden helpless orgasm, there awoke in her new strange thrills rippling inside her. Rippling, rippling, rippling, like a flapping overlapping of soft flames, soft as feathers, running to points of brilliance, exquisite, exquisite and melting her all molten inside. It was like bells rippling up and up to culmination. She lay unconscious of the wild little cries she uttered at the last. . . . she felt the soft bud of him within her stirring, and strange rhythms flushing up into her with a strange rhythmic growing motion, swelling and swelling till it filled all her cleaving consciousness, and then began again the unspeakable motion that was not really motion, but pure deepening whirlpools of sensation swirling deeper and deeper through all her tissue and consciousness, till she was one perfect concentric fluid of feeling, and she lay there crying in unconscious inarticulate cries. The voice out of the uttermost night, the life!

Lost by Kayden McLeod
Summer's Indiscretion by Heather Rainier
Accept This Dandelion by Brooke Williams
The Housewife Assassin's Handbook by Josie Brown
Epic by Conor Kostick
Some Wildflower In My Heart by Jamie Langston Turner
An Alpha's Storm (Water Bear Shifters 1) by Sloane Meyers
Down Outback Roads by Alissa Callen
The Big Love by Sarah Dunn
Doctor Who and the Cave-Monsters by Hulke, Malcolm
Our partner