Read In My Sister's Shoes Online

In My Sister's Shoes 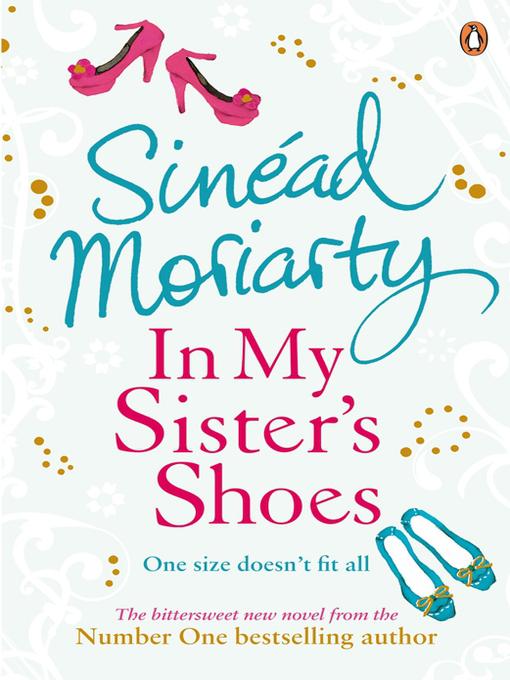 Sinéad Moriarty lives in Dublin with her husband
and their two sons.
In My Sister’s Shoes
is her fourth
novel.

In My Sister’s Shoes

All rights reserved Without limiting the rights under copyright reserved above, no part of this publication may be reproduced, stored in or introduced into a retrieval system, or transmitted, in any form or by any means (electronic, mechanical, photocopying, recording or otherwise), without the prior written permission of both the copyright owner and the above publisher of this book

I waited… nothing. Bollox. I still wanted to kill them. I thought the counting was supposed to calm me down, make me Zen, stop me wanting to murder them.

The letter T flew by me, hit the wall and slid down, leaving a trail of tomato sauce behind it. An F hit me right in the face, splashing tomato sauce into my eye. They screeched with laughter.

I wiped my eye with my sleeve and sighed. How, in God’s name, had I ended up here? Where was my old life, the glamorous one, the independent one, the nice, clean, nonfood-smudged, non-snot-covered one?

But they weren’t and I was drowning in a sea of alphabet spaghetti.

As I strutted up the pathway to my sister’s house, I realized I felt really happy for the first time in ages. I was on top of the world. I, Kate O’Brien, was a television presenter. After eight years of living in a studio apartment in London, making tea for other presenters, I finally had my own show and it felt fantastic.

I rang the doorbell and heard squealing from the other side. The twins were obviously very excited about being five.

The door opened and a very harassed-looking Dad pulled me into the hall.

‘Guess what?’ I asked, dying to tell him my good news, but he cut across me.

‘Thank God you’ve arrived. Mark’s been boring me rigid about some new mathematical theory or other. I’d rather nail my balls to the mast of a sinking ship than listen to another word of it,’ he hissed.

‘Charmingly put. Nice to see you too, Dad.’ I laughed, and looked at my brother-in-law, Mark, who had his back to me and was now busy showing the twins how to multiply three apples by three pears. They gazed adoringly at their father as he prattled on.

‘That dude needs to get out more,’ drawled Derek, my younger brother, from the couch. ‘It’s bad enough that he’s a maths professor but he doesn’t need to inflict it on his kids. They’re going to be total nerds. No one wants to hang out with kids who are good at maths!’

‘You could have done with a bit more focus on your studies, instead of pie-in-the-sky dreams about being a musician,’ grumbled Dad. He had been funding Derek’s dream of becoming a famous rapper for years and was clearly fed up.

‘Seeing as you haven’t made it outside the garage yet, I won’t hold my breath.’

‘She’s in the kitchen putting the candles on the cake,’ said Dad. ‘If you can call it a cake, it’s a rotten looking organic carrot yoke. Sure you wouldn’t feed it to a rabbit.’

As if on cue, my elder sister came through the door carrying the birthday cake. ‘Kate, I’m so glad you made it,’ she said, coming over to kiss me.

‘I wouldn’t miss the boys’ birthday,’ I said, winking at the twins, who ran across to say hello.

‘Except last year when you forgot,’ said Mark, as I glared at him. I could never figure out what Fiona saw in him. I suppose because she was a maths genius too, they had numbers in common.

‘I hope it’s more suitable than their Christmas present was,’ said Mark.

I blushed. Riddled with guilt at having forgotten their fourth birthday had spent a month’s wages on a PlayStation that came with two games – Big Mutha Truckers 2 and Airforce Delta Strike – which I’d thought was a really cool present. How was I to know that they were violent games and that the boys were too young for PlayStation? I didn’t have a clue about kids. Fiona was speechless and Mark kept shaking his head, saying how totally unsuitable it was and didn’t I know that these games corrupted children’s minds? I had felt about two feet tall.

Jack held up his present, looking confused. ‘What is it?’ he asked.

‘Burberry ear-muffs – to keep your ears warm in the winter when you go to the park,’ I announced.

The twins looked blankly at me.

‘Look, you put them on like this,’ I said, placing them on Jack’s head.

‘Yucky,’ he said, and pulled them off.

‘What’s this?’ asked Bobby, trying to put a little jacket over his head.

‘That’s a little Burberry coat for Teddy, so he can keep warm when you take him for walks,’ I said, grinning at Teddy, the cocker spaniel, who was curled in a ball in the corner.

Everyone was staring at the ear-muffs in silence.

‘I thought tartan went out of fashion in the sixties,’ said Dad, laughing.

Bobby peered into the bag to see if anything else was in there. Finding nothing, he fixed his eyes on me with raw disappointment.

We heard a yowl and turned to see Jack wrestling Teddy into the dog coat – clumps of his fur were stuck in the zip.

Mark ran over to save him.

‘Guess what?’ I said, still bursting to tell them my news.

‘I’ve got my own show!’ I said, ignoring them both.

‘Ah, sure what good is that to you?’ said Dad. ‘You need to focus less on that auld job and more on meeting a nice boy.’

‘So, are you going to be earning mucho
dinero
?’ asked Derek, perking up.

‘Well, it’ll be a lot better than what I’m on now, although that wouldn’t be hard. But don’t be expecting hand-outs – get your own job.’

‘Is it an entertainment show?’ asked Fiona.

‘Yes, pretty light stuff – interviewing rising stars, reviewing music, movies and TV shows. It’s on the Lifechange channel, not exactly the BBC – but it’s up and coming and at least I finally get to present. I’ve taped the first three shows already. It’s going well.’

‘Mark,’ Fiona called, ‘did you hear the good news? Kate has her own show. She’s going to be famous.’

‘Finally. Well, at least now you won’t have to worry about her so much,’ he said, sitting down beside his wife and putting his arm round her.

‘Fiona! What are you doing worrying about me? I’m thirty, for God’s sake, I’m fine.’

I smiled at her. She’d been worrying about Derek and me since Mum had died twenty-two years ago. Dad, heartbroken, had thrown himself into work and left Fiona, aged twelve, to look after her younger siblings. I was eight and Derek was only four, so Fiona had become our surrogate mother. I always felt guilty that she had given up her youth to make our sandwiches and do our homework with us. She had been twelve going on forty.

‘Well, you can stop right now,’ I said. ‘I’m an overnight success after eight years’ grafting.’

‘So, like, can Gonzo and me come on your show and try out some of our new material?’ asked Derek.

‘What happened to families helping each other out?’

‘She doesn’t want the show to be cancelled,’ said Dad.

‘Your stuff isn’t good enough yet. It needs more work,’ I said, trying to be tactful.

‘We’ve been working on some new songs. You’ll be blown away when you hear them. We’re recording a CD on Friday so I’ll send you a copy and you can slot us into your show,’ said the wannabe rapper, as he headed out the door. ‘Thanks for the grub, Fiona, I’ll catch you later.’

‘Oh, God.’ I groaned. ‘How am I going to get him off my back? He’s going to hound me about this everyday.’

‘Couldn’t you put him on the show for a few minutes?’ asked Fiona.

‘Is it that bad? I thought some of the lines rhymed well,’ said the ever-supportive oldest sibling.

‘It’s absolute tripe. The lad needs to cop on to himself and get a proper job,’ huffed Dad.

‘I’ve told him, next year when he turns twenty-seven the finances will dry up. Besides, he’s working part-time at the moment so I’m helping him less. I can tell you now, when your two boys grow up and beg you to support their pipe-dreams, you’ll find it a lot harder to say no than you think.’

‘Our boys will be mathematicians, like their parents,’ said Mark, as we watched Jack rubbing birthday cake into Bobby’s hair.

‘So, how’ve you been?’ I asked Fiona, changing the subject as quickly as possible.

‘Good, thanks. You know, busy with teaching and the boys. Actually, we have some exciting news too. Mark’s been asked to submit a paper for the Goldwin Prize.’

Mark nodded. ‘It’s a big honour. It’s for the conference on statistics, mathematics and related fields.’

‘What do you get if you win?’ Dad asked, in his usual blunt manner.

‘A huge grant for the department, and worldwide recognition of his work. It’s a really big deal – there’s a lot of pressure on him,’ said Fiona, smiling proudly at her husband.

‘Thank you, Kate,’ said Mark. Then, to Fiona, he said, ‘Actually, darling, speaking of the prize, I need to slip away and do a couple of hours’ work, if that’s all right?’

‘This paper’s going to make a difference to the way people think. Not as important as interviewing teenage singers, perhaps, but important none the less. I’ll be back to read the boys a bedtime story,’ he said, kissed Fiona and walked out.

Bad Attitude by Tiffany White
Cursed by Desconhecido(a)
Love Proof (Laws of Attraction) by Ruston, Elizabeth
The Story of Britain: From the Romans to the Present by Rebecca Fraser
jinn 03 - vestige by schulte, liz
Crossroads by Megan Keith
Cowboy in Charge by Barbara White Daille
Black Mirror by Gail Jones
Something for Nothing by David Anthony
Franco's Fortune (Redemption Book 2) by Cara Marsi
Our partner