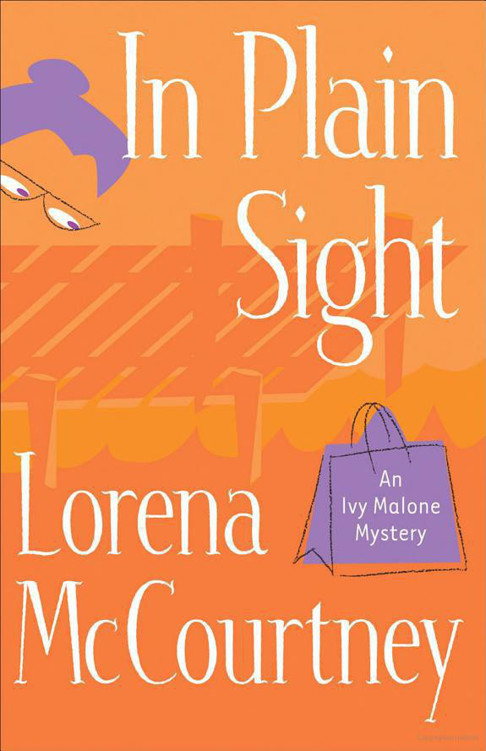 Other books by Lorena McCourtney

Cast all your anxiety on him because he cares for you.

In spite of the threats, I’d held on to a small hope that the danger would, given a little time, fade away. The phone call I’d just received squashed that hopeful fantasy.

The Braxtons are not fading away.

Because of my role in convicting his brother of murder, one mean, beefy Drake Braxton vowed at the end of the trial to make roadkill out of me. There are apparently more Braxtons eager to help in this endeavor. Their homicidal intentions were made all too clear when my house caught fire, with me in it, a couple of weeks ago. Intentions thwarted in the small-blaze stage only because of the observant eyes of my good—and nosy—neighbor, Magnolia Margollin.

Although I recently discovered that I have aged into a semi-invisible state, I’m afraid I may not be invisible enough to evade the Braxtons’ murderous intentions toward me. This phone call that threatened dire damage to various parts of my anatomy was further proof of those intentions. The prudent action at this point appeared to be to remove myself from the danger zone for a time.

Ever since the death of my best friend, Thea, my niece DeeAnn Harrington had been urging me to stay with her and her family in their big house near the small town of Woodston, Arkansas. She’d also suggested I should consider living with, or close to them, permanently.

I’m reasonably certain I don’t want to make a permanent move. Harley and I bought this house here on Madison Street in Missouri many years ago, and, though Harley is gone and the area has deteriorated in the past few years, it’s still home to me. But I’ve been talking it over with the Lord, and a temporary visit down there in the lovely Ozarks appears to be a fine solution to my problem.

“Oh, Aunt Ivy, you should see what I just crocheted! It’s a candy-pink top that’s just awesome. I can’t wait for some nice spring weather to wear it.”

I’d helped Sandy learn to crochet the last time I was down for a visit. Now, with a certain apprehension about teenage apparel, I asked, “Does it show your belly button?”

“Does your mother know?”

I didn’t intend to jump into the middle of
that
, so I just said, “Could I speak to DeeAnn, please?”

“Are you going to come visit us again? Oh, I hope so! But you need to come right away, before—”

“Okay, I’ll get Mom. She’s upstairs sorting through some towels and stuff to pick out things that match.”

That seemed odd. DeeAnn is a good enough housekeeper, but she doesn’t usually fuss about such things as whether her towels coordinate. She came on the line a minute later.

“Aunt Ivy, how good to hear from you! I heard on the news that they sentenced that awful man who murdered your neighbor, but I couldn’t get you when I tried to call. And everything has been in such an uproar here that I didn’t get around to trying again.”

Uproar
was the usual state of existence in the Harrington household. The twins, Rick and Rory, were off at college in California now, but DeeAnn was financial secretary at their church, created puppet shows about Korman the Klutzy Kangaroo for the Sunday school kids, and kept books for several small businesses in Woodston. Sandy practiced gymnastics in an upstairs hallway, zoomed around on her skateboard, kept in touch with people from Arkansas to Zanzibar on the Internet, and sometimes had the guys in a local Christian rock band over to practice. Husband Mike did executive things with an expanding roofing manufacturer and was up to his elbows in activities aimed at keeping the teens in a church youth group busy.

“Maybe I can help,” I said to DeeAnn. “There have been some, uh, unforeseen developments here, and I’m thinking I might take you up on your invitation to come visit for a while.”

It didn’t take extrasensory powers to hear the dismay in her voice.

“If it isn’t convenient now, maybe some other time,” I amended hastily.

“Oh, Aunt Ivy, I feel so bad about this. It isn’t that it isn’t convenient, and we’d love to have you. But we’re moving. Mike has gotten a promotion, but it’s also a transfer. To Hawaii!”

“Hawaii,” I echoed in astonishment. I finally gathered my wits together enough to add, “Well, this is so exciting! And wonderful news for all of you. Congratulations!”

“It is wonderful news, and we are excited. But it’s all happening so fast. We’re leaving in less than a week, and there’s all this sorting and packing and everything that has to be done. I didn’t realize we had so much
stuff
.”

I was glad I hadn’t mentioned my Braxton problem. DeeAnn would feel worse than ever if she knew about that. “Throw things out,” I advised. “That’s what God designed moves for. To make us get rid of our excess baggage.”

“Hey, I know what let’s do. As soon as we get settled over there, you come stay with us! Sandy has been researching all this stuff about Hawaii on the Internet. We’ll eat fresh pineapple and go body surfing and roast a whole pig in a luau!”

A whole pig sounded a bit intimidating, but, in general, a trip to Hawaii might be a fine idea. If the Braxtons didn’t roast
me
first. “Maybe I can do that,” I said.

“Aunt Ivy, is something wrong?” my ever-perceptive niece asked. “You aren’t thinking we don’t
want
you to visit, are you?”

“Well, of course I think that,” I said with pretended huffiness. “I’m sure you’ve invented this wild story about Hawaii just to keep me from coming. I venture to say you may even go so far as to move to Hawaii to make the story convincing.”

DeeAnn laughed. “There’s one woman I’ve done some bookkeeping for whom I’d consider moving to Mars to escape from, but not you, Aunt Ivy. Never you.”

“I know. And I appreciate that.”

“But there is something wrong, isn’t there?”

I considered how to phrase my situation in order to be truthful but not cause DeeAnn concern. “Since the trial, things have felt a bit … edgy here. I was just thinking it would be nice to get away for a while. But don’t you worry about it. I’ll be fine. I’ll just go spade up my garden and plant some spring peas. Now tell me all about Hawaii.”

DeeAnn bubbled on about how the company had leased a house for them in Honolulu, and how they’d already had welcoming emails from relatives of friends in their Woodston church. “Sandy has mixed feelings about the move. She’s excited about Hawaii, but she hates to change schools in the middle of the year. And leave her friends, of course. I’ve found homes for all my houseplants. We’re down to only one cat at the moment. Celery. And Mrs. Grandy from church is taking her, so no problem there.”

Celery, their stub-tailed calico cat, so named for one of her odd food preferences, was a stray that had wandered in a couple of years ago. I’ve always suspected there must be some sign in generic animal language announcing “Free food! Nice folks! Come on in!” posted on the back steps of the Harrington house.

“But we haven’t decided what to do about the house, whether to put it up for sale or rent it. I do love this old place …”

“I’m sure everything will work out fine. Well, I’ll just let you get back to your sorting and packing. We’ll talk again before you leave, okay?”

I didn’t mean to cut her off, but I had some thinking to do here. With Plan A shot down and the Braxtons gunning for me, it was time to move on to Plan B.

Unfortunately, I had no Plan B.

I stood at the window looking out on my backyard garden area.
Now what?

The yard, under a drizzle of spring rain, looked as dispirited as I felt. Straggly weeds. Puddles and mud. Soggy dead leaves. In spite of my cheery words to DeeAnn, I felt no urge to go out and dig. Actually, I’ve been considering giving up gardening. My vegetables too often bear a disconcerting resemblance to an experiment in plant genetics gone awry.

Even my trusty old ’75 Thunderbird, parked in the driveway because the garage door was stuck, looked as if it was losing its grip on elegance. The dent in the rear fender that had been barely noticeable seemed more pronounced now. And when had I lost that left front hubcap?

Anything but Mine by Linda Winfree
The Playmaker (Fire on Ice) by Madison, Dakota
Seduction and Snacks by Tara Sivec
Cuentos de amor de locura y de muerte by Horacio Quiroga
Bone War by Steven Harper
The Sibyl by Cynthia D. Witherspoon
The Naked Gardener by L B Gschwandtner
The Cottage on the Corner by Shirlee McCoy
Business Makes Strange Bedfellows by E. E. Ottoman
Death of a Bankster by David Bishop
Our partner