Read In Search of the Alter Dom Online

In Search of the Alter Dom 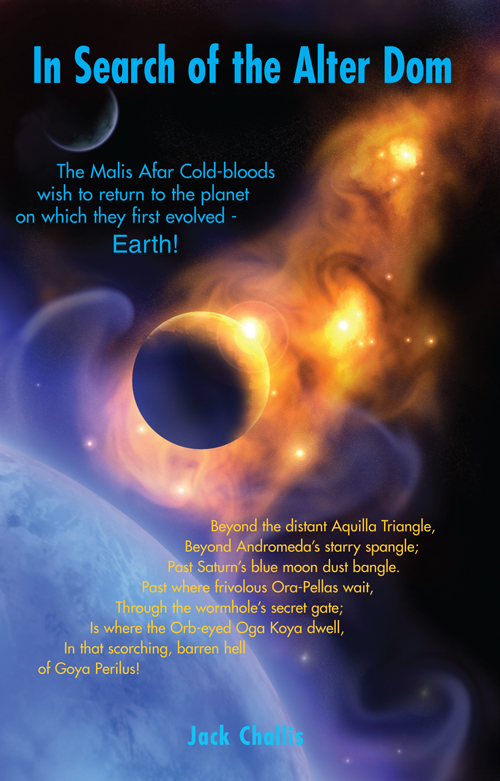 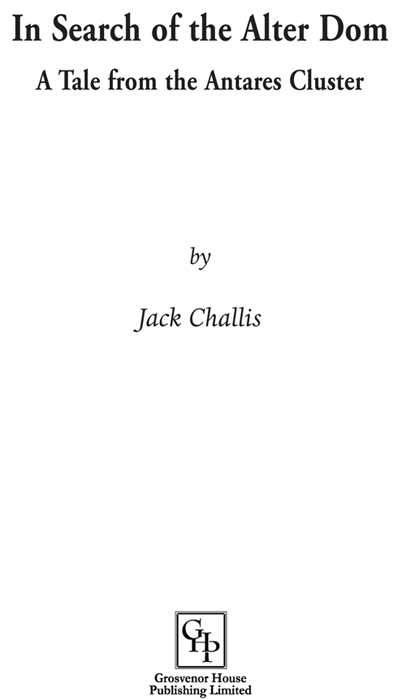 My thanks to Ian and Kim Von Heintze
for the computers and encouragement to write again.
To Victoria for her patience. All the staff and tutors
at South Wye learning centre for their computer
expertise and guidance: dealing with a novice.

The Blind Tamasic of Tarrea

Prisoner of the Malis Afar and Na Idriss

Battle of the Star Fleets

The Legend of Angharad

From part two of the Antares Cluster Trilogy:

The Arrival of the Aliens.

The Druid walked the stony trail through the mountain glade,

Beneath the dark, chilly shadow that Cader Idris made.

A Lingly Sprite took quick to flight at the druids tread,

She hovered in the darkening sky above the druid’s snowy head,

‘You cast your shadow on my freckles,’ the hovering Ling said.

‘Just tell me where, you Lingly fairy Sprite; where Grunwalde Angharad

In the sweetest and softest tones that sounded like a sigh,

‘Do not linger in this fairy glade - Changelings four of toe and finger, hide in the dappled shade. Pray do not bide, for darkness soon will cloak this cold enchanted mountain side.’

‘This night be Halloween,’ the Druid said, ‘when the Star-worshipers ride, I demand only to see your fair Queen Angharad - to pay my yearly tithe.’

‘star-worshiping is our creed - we care not of Christian laws or Druid’s demands,

Who need to plough and bury the seed.’

‘I only seek safe passage,’ the Druid said, ‘through cold Llanberis Pass,

Where Tatarus Hobs with toothed gobs hide among it’s granite masts. So

pray tell me where Angharad lays a bed and rests her lovely golden head.

For Angharad loves her cups, I bring sweet strong Dolgellau honeyed mead, to drink upon her wild, jet-black steed; over the Mawddach’s tide and reed; To fair Plas Mynach Castle where greedy Boudica Sian, Tam-Lin and lovely Floranas hide - waiting to join the fairy ride; an arrows flight from the laughing tide; then over Hendre Mynach where devout monks pray and dwell, that ring the bell; tolling the knell over Abermaw town. Then up across the stonymountainside, over fair Merionedd.’

‘You speak right,’ sang the fairy sprite, ‘this night we also ride - collecting

tithe over Dinas, then fly over sleepy Machynlleth town; along the Dyfi way; following the seaweed strand to Cardigan Bay to pick up Brindled Noops

The Lingly sprite she sparkled bright, her wings flashed a pastel haze;

‘I will tell thee right, where Angharad sleeps this night - where she’ll sip and sup in pale moonlight – first pray tell me our Lingly creed.’

The old Druid spoke: the silence broke. ‘Cocoon or Chrysalis we be kin, let

our three Changeling hearts beat within - to harm our kind, is darkest sin.’

‘The bargin’s made,’ said the Ling, ‘if broken you will burn in Golgin Hade, with Tormented Taarbs – so listen you well.’

‘Grunwalde Angharad’s downy bed is in a dell - a Fairy league away.’

‘But where - but where - is what I care,’ the old Druid replied.

nearby and the Druid heard her sweet voice rise up to the darkening sky.

‘Where nymphs and fairies skip, and Tatarus Hobs put jug to lip:

Where the polecat and weasel nip, and the bee and butterfly sip;

Where the bluebell carpet haze, through a thorny bramble maze;

Where the night jar vigil keeps and the shining Ling star peeps;

Through the willows leafy weeps - ti’s there Angharad sleeps;

Beneath the wild woodbine.’

The Druid groaned, ‘a Fairy riddle,’ he moaned, ‘and the sun is setting fast,

‘I will never journey safely home, to Caple Curig - in the cold dark shadows cast.’

The gloom suddenly grew bright with spangled light; and the beautiful

Green-eyed Angharad appeared: her skin, as pale as pale moonlight.

‘Your tithe is paid old Druid - your token made, consider it says and done;

Now leave the darkening valley, before the setting of the sun. I Angharad, Queen of

the faries grant your boon. You have safe passage through cold Llanberis pass, without harm form any dead or living things. My Tatarus Hobs with great-toothed gobs

will skulk in the moonlite shadows cast; behind the granite masts of Llanberis pass.

They will dare not stir till you, old Druid, have safely passed.’

‘For we both be Welsh Pagans after all, so make haste –

leave this cold enchanted place - before the chilly nights’ fall.’

If by fault you wander through an enchanted glade.

Be sure not to linger, if you spy beings four of toe and finger,

Hiding: watching from the dappled shade!

Climbing a lonely tree fringed mountain path on a balmy, tranquil, June evening, Blodwyn Jones was enjoying the twittering-trill of birds’ evensong and the hidden vespers of insect hum. All the stunted mountain ash, rowan and oak trees were draped in their young shades of new summer’s green at that heady, halcyon time of year.

Blodwyn (Welsh for white flower) was a practical and resourceful sixteen-year old. She took a deep breath filling her lungs with pure, wild herb-scented mountain air.

It was the evening before midsummer’s eve. Summer was in its glorious prime; at that magical period when the fade of day flirts with the shades of night and like young lovers lingers, reluctant to part; prolonging a magical and enchanted twilight.

Blodwyn, a tall, strong girl of hardworking Irish and Welsh parents; who owned a smallholding in Mid-Wales, was proud of her Celtic ancestry. Her pretty face, golden hair and green eyes were rather spoiled by thick, cheap NHS spectacles!

Her parents had brought her up to be sensible and logical. They had told her: “Given enough thought, all problems can be solved.” Blodwyn had an immediate problem – the bully Caddoc Morgan!

The foul-mouth, bull necked, Caddoc Morgan had a score to settle. Blodwyn had been interfering with his activities; especially concerning the two timed, myopic, small-boned children of the Widow Owen.

Caddoc was a cunning bully, with the brain of a fully-grown ferret. He knew the law, especially concerning his own personal protection from irate parents. Caddoc took great care never to leave tell-tale external bruising or any visible injures on his victims.

Caddoc was an expert arm twister; finger bender, stomach puncher and headlock specialist. The only bruises he left were internal. Being a girl would not save Blodwyn – Caddoc believed in equal rights.

Blodwyn would also have to give the ‘Widow Owen’ problem some thought and do something to help.

‘Owen the Coal’ died prematurely due to an excess of tobacco, alcohol and a surfeit of coal dust. After his morning dry-run he would conduct his wet-run beginning at the White Horse, Red Lion then the Skinners. In the two other pubs of Talla Pandy, Owen the Coal was not welcome due to the black residue he left on the soft furnishings and a haze of coal dust that followed him around like a devoted dark cloud. The regulars complained that if they’d wanted Pneumoconiosis of the lungs they would have moved to South Wales and become miners.

Owen the Coal died suddenly, but happily in the warm embracing arms of the Dyfi Forester. Blodwyn had heard certain people say in sanctimonious tones to the proud Mrs. Owen at the funeral: “If there is anything I can do – let me know.” Blodwyn was brought up to believe: “Actions make a better world – not hollow words.” Her parents made no such promises. But the Widow Owen always found something nice; mysteriously left on her out-side porch for Sunday lunch.

Blodwyn also found herself in an extraordinary situation that was not entirely to her liking – it was affecting her happy everyday existence. She enjoyed her simple ordinaryuncomplicated life; helping her parents on their smallholding, school, looking after her pony and socializing with friends.

Blodwyn came from a poor but content disciplined family; run by a hardworking strict mother; who was not beyond giving her daughter a whack with a wooden spoon when called for. Her father Brian, on the other hand like most dads with their daughters, was a pushover. Blodwyn lacked many of the things most girls her age took for granted; like her once best friend the spoilt and pampered Myfanwy Jenkins.

Unlike many girls her age, Blodwyn did not have a boyfriend; confident of her judgment; she would wait and had no intention of kissing a dozen frogs before she found her prince.

Myfanwy Jenkins, Blodwyn’s best friend had been chosen by the ‘
Lings’
a strange alien race of insect ancestry to become their new Queen. (Once a young human female was chosen there was no option but to comply.) Myfanwy was now Grunwalde Angharad the manipulative, greedy, very rude childish human Queen of
Star-worshiping, Changelings!

Lings
were brought to Earth by their first Queen
Nemesis
a giant hornet-like creature from the dying Venus. Lings had managed to live mostly undetected on Earth – for they were true Changelings
– “three hearts”
not simple
Shape-shifters
.

Blodwyn was making her way to a lovely shaded glade, between two dark mountains. She was not aware that an incident in outer space would dramatically change her life; forcing her reluctantly on a quest into the Antares Cluster so fraught with danger
–
she was unlikely to survive!

The
Alter Dom
, a powerful higher being whose presence ensured peace in the Antares Cluster, suddenly went missing. It was last seen by a pair of frivolous,
Ora
-
Pellas
entering the
Event Horizon
of a feeding black hole: the most dangerous phenomena in all the universes! Anything – even planets, once past the Event Horizon of a Black-hole are lost forever; leaving only a lifeless, everlasting image – there is no return!

The Great Death by John Smelcer
Fortunes of the Imperium by Jody Lynn Nye
The Financial Lives of the Poets by Jess Walter
Summer Son by Anna Martin
My Vampire and I Vol 3: Blood Resurrection by J. P. Bowie
Taken With You by Shannon Stacey
Fire for Effect by Kendall McKenna
Fated by S.H. Kolee
Tin City Tinder (A Boone Childress Mystery) by David Macinnis Gill
Carnations in January by Clare Revell
Our partner